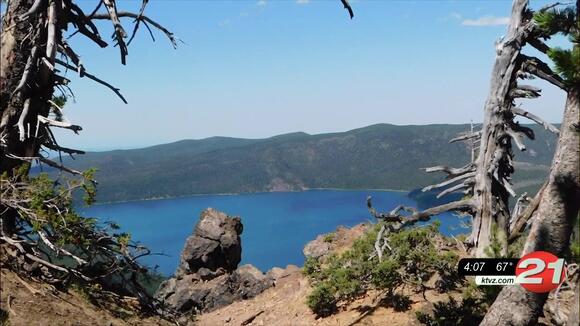 BEND, Ore. (KTVZ) -- The only energy source of its kind in the world could take shape in Central Oregon in coming years.

In late September , AltaRock Energy announced the results of its latest study near the crater (caldera) of Newberry Volcano. The study found that the high temperature in the impermeable rock at the volcanic crater can be used as an energy source.

Geoff Garrison is the VP at AltaRock Energy, a company who’s been working at the Newberry Volcano since 2010.

He said their latest study finds if they dig deeper, to higher-temperature areas, they can produce energy that costs nearly half the price of conventional geothermal, and close to the price of natural gas.

AltaRock's analysis found the Levelized Cost of Electricity would be less than $0.05/kilowatt-hour. The company says a conventional EGS (enhanced geothermal system) resource has an LCOE of $0.10/kilowatt-hour or higher.

Mike Riley, executive director at The Environmental Center in Bend, is aware of the work AltaRock has been doing and generally supportive, though cautious.

“I actually think it's an exciting opportunity for our community,” Riley said. “I think from an environmental perspective, there are still some questions to answer.”

Riley says he supports the project, but has concerns over its impact on surrounding wildlife, native peoples and its use of water.

Garrison said, “This is not a consumptive use of water, so we’re not using water from the overall water budget. The water is recycled and put back underground, once it is used to extract heat.”

Garrison said the company is working with several government and environmental agencies, including the Energy and Agriculture departments, as well as the Bureau of Indian Affairs.

He said visually, the work will be done out of sight from the visitor center and monument.

Garrison says they hope to have a plant operational in the next five to eight years, powering between 150,000 and 300,000 homes.

“We have access to pretty much the entire Oregon grid,” Garrison said.

He said between now and then, there is still more testing to be done on the behavior of rocks at such high temperatures.

“We know more about the surface of Mars than we do what’s underneath our feet,” Garrison said.

Riley said with the effects of climate change already prevalent, any solution is a step in the right direction.

“We all need to figure out how to reduce our piece of it,” Riley said. “It's this big, global problem that’s the sum of a lot of activity, and this is one of the things we can be doing at the local level.”

Garrison said Newberry is the perfect place to start.

“Central Oregon is very energy-rich, when it comes to these resources,” Garrison said. “We think this is a real opportunity for the area around Bend to grow technologically.”

Although commonly referred to as Newberry Crater, the "crater" is in fact a caldera formed when the overlying rocks collapse when a magma chamber is emptied, the Forest Service says . The caldera stretches across 17 square miles in the heart of the volcano. The 1,200 square mile volcano (about the size of Rhode Island) remains very active to this day. Newberry is both seismically and geothermally active. Geologists believe the caldera sits over a shallow magma body only 2 to 5 kilometers deep.

The post ‘Super HotRock’ at Newberry Crater could be first renewable energy source of its kind appeared first on KTVZ .

A new project seeking proposals for Deschutes County's Knott Landfill in southeast Bend could result in a win-win situation for the county, landfill users and the environment. The post No longer wasted? Deschutes County seeks proposals to use gas created by Knott Landfill’s trash appeared first on KTVZ.
DESCHUTES COUNTY, OR・3 DAYS AGO
KTVZ News Channel 21

...Or it might not. The current temporary mandate expires in February, but some health officials want to make it permanent. The post Oregon indoor mask mandate may stick around appeared first on KTVZ.
OREGON STATE・1 DAY AGO
KTVZ News Channel 21

Some Central Oregonians may be counting down the days until we see some snowfall, especially in the mountains. But for Phil Anderson and his construction team, the lingering warm weather in town means more work can get done. The post High Desert’s late-season warmth proves beneficial for construction crews appeared first on KTVZ.
BEND, OR・2 DAYS AGO
KTVZ News Channel 21

BEND, Ore. (KTVZ) -- Volunteers at St Vincent de Paul of Bend are back inside for roughly the first time since the pandemic started, stocking groceries to help serve those in need in Central Oregon. The post Bend nonprofit understaffed; volunteers concerned over Omicron Covid variant appeared first on KTVZ.
BEND, OR・2 DAYS AGO
KTVZ News Channel 21

‘Unique opportunity’: Bend set to get bigger with addition of 261 undeveloped acres

Bend is getting bigger, again. The city's Growth Management Division has begun the first steps of planning for the development of 261 acres of land on Bend's southeast side, east of 27th Street and north of Knott Landfill. The post ‘Unique opportunity’: Bend set to get bigger with addition of 261 undeveloped acres appeared first on KTVZ.
BEND, OR・10 DAYS AGO
KTVZ News Channel 21

A Bend realty group is suing the state over its pending "love letter" ban, which bans home buyers from adding personalized letters to their offer. The post Bend real estate group sues state over pending ban on ‘love letters’ to homebuyers appeared first on KTVZ.
BEND, OR・10 DAYS AGO
KTVZ News Channel 21

Food 4 Less is a locally owned grocery store preparing for the holiday season, but there are some items it's prepared to run out of. The post Labor, supply shortages affecting holiday grocery shoppers in Central Oregon appeared first on KTVZ.
BEND, OR・15 DAYS AGO
KTVZ News Channel 21

"For Sale" signs are hard to miss in the empty lot across from the Brosterhous and Murphy roads roundabout in Southeast Bend. The land has already been bought by developer GP Energy, which has plans to build a gas station and two drive-thru restaurants. The post Proposed SE Bend gas station sparks neighborhood controversy, petition drive appeared first on KTVZ.
BEND, OR・15 DAYS AGO

Bend city councilors posted a long list of active and possible solutions to address the houseless situation. The post City of Bend ‘playing catch up’ with homelessness; council posting possible solutions appeared first on KTVZ.
BEND, OR・16 DAYS AGO

Situated between the Deschutes River and sparkling mountain views, Tumalo has become a popular spot for visitors to stop, shop and grab a bite along Highway 20, while many residents enjoy the rural feel of the community. The post Tumalo community sewer system sought, to move town off risky septic systems appeared first on KTVZ.
DESCHUTES COUNTY, OR・18 DAYS AGO
KTVZ News Channel 21

New July 1 population estimates due for release late Monday by Portland State University may give new clues about the impact of the pandemic on Central Oregon's growth rates, and also help answer: Is Bend now a city of 100,000 or not? But either way, the city has lots of planning to do, to accommodate current and future growth. The post City of Bend tops 100K residents (again); Deschutes County powers past 200K, Crook past 25K appeared first on KTVZ.
DESCHUTES COUNTY, OR・19 DAYS AGO
KTVZ News Channel 21