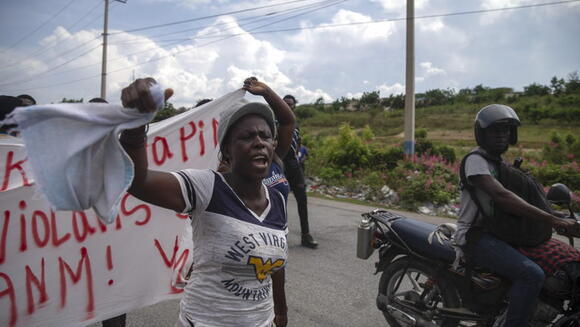 The leader of a Haitian gang has threatened to kill a group of kidnapped US missionaries if his ransom demands are not met.

Wilson Joseph, who runs the 400 Mawozo gang that police say is holding 17 members of the missionary group, made the violent threat in a new video released on social media.

“I swear by thunder that if I don’t get what I’m asking for, I will put a bullet in the heads of these Americans,” he said, according to The Associated Press.

The gang has demanded $1m per person after it abducted 16 Americans and one Canadian, including five children, and their driver.

“You guys make me cry. I cry water. But I’m going to make you guys cry blood,” he said in the video, which was shot in front of coffins that seemingly contained the bodies of recently killed gang members.

The missionaries are associated with the Ohio-based Christian Aid Ministries, which has said the group is made up of five men, seven women and five children.

The adults are aged between 18 and 48, while the five abducted children include an 8-month-old baby and youngsters ages 3, 6, 13 and 15 years old.

Among the kidnapped are members of a family from the congregation of Dunkard Brethren Church in Hart, Michigan, according to the church officials.

The family, who have not been named, had arrived in Haiti earlier this month and were expected to stay several more months, the church’s minister Ron Marks told CNN.

The group was kidnaped on Saturday after they visited an orphanage in Croix-des-Bouquets, a northeast suburb of the capital Port-au-Prince.

It is the latest in a string of kidnappings in the country, which has been rocked natural disasters, poverty, political instability and civil unrest.

The FBI has agents on the ground who have been helping local officials with the investigation.

The non-profit Center for Analysis and Research for Human Rights says that 400 Mawozo has abducted dozens of people this year, including foreigners.

CARDH says that there has been 628 kidnappings since January, involving 29 foreigners, with an increase of nearly 300 per cent since July.

US missionaries say 2 of 17 abductees freed in Haiti

PORT-AU-PRINCE, Haiti (AP) — Two of 17 abducted members of a missionary group have been freed in Haiti and are safe, “in good spirits and being cared for,” their Ohio-based church organization announced Sunday. Christian Aid Ministries issued a statement saying it could not give the names of those released,...
WORLD・10 DAYS AGO
Telegraph

Two North American hostages captured at gunpoint last month by a notorious Haitian criminal gang have been released it was announced on Sunday. Details of the release were disclosed by Christian Aid Ministries, the Ohio-based organisation which sponsored the visit. Founded in 1981, the group has been carrying out projects...
PUBLIC SAFETY・10 DAYS AGO
Black America Web

Even though Haiti can’t seem to get a break there is a victory that has to be acknowledged. Two missionaries have been freed after being held hostage over a month. As spotted on CNN two Americans have been let go after being captured. The Christian Aid Ministries confirmed the great news after days of speculation. “We have learned that two of the hostages in Haiti were released. We praise God for this! Only limited information can be provided, but we are able to report that the two hostages who were released are safe, in good spirits, and being cared for,” the organization stated in a statement on Sunday, November 21.
PUBLIC SAFETY・9 DAYS AGO
WALA-TV FOX10

Two missionaries kidnapped in Haiti over a month ago have been released, according to a statement by the US-based Christian Aid Ministries. CNN has not been able to independently confirm their release. "We have learned that two of the hostages in Haiti were released. We praise God for this! Only...
PUBLIC SAFETY・10 DAYS AGO

WASHINGTON, D. C. -- The Assistant Secretary of State for Western Hemisphere Affairs told U.S. Sen. Rob Portman earlier this week that he’s been personally involved in trying to recover 15 Christian missionaries from an Ohio organization who were kidnapped in Haiti six weeks ago. During a Senate Foreign Relations...
OHIO STATE・21 HOURS AGO
Newsweek

The girl was allegedly punished for wetting the bed and was chained to a barred window in direct sunlight where temperatures reached 122 Fahrenheit.
PUBLIC SAFETY・2 DAYS AGO
Telegraph

A Charlie's Angels-style gang of glamorous Brazilian drug couriers who delivered narcotics across London on mopeds have been jailed after police dismantled their operation. Controlled and recruited by the only man in the organisation, the female gang members supplied drugs on a vast scale, making almost £100,000 profit every month.
PUBLIC SAFETY・9 DAYS AGO

The family of Sativa Transue, a 26-year-old American woman from Spokane, Washington who was found dead in her Cancun hotel room while on vacation with her boyfriend, said she looked like she had been “beaten to a bloody pulp” when Mexican authorities discovered her body on Saturday. “I received a...
PUBLIC SAFETY・16 HOURS AGO
Daily Beast

I Saw Firsthand Why Jeffrey Epstein Killed Himself

Thanks to some intrepid reporting by The New York Times, which sued the Bureau of Prisons to release documents related to Jeffrey Epstein, I woke up on Tuesday to find that my real-time observations about him were now public records, “news fit to print.”. I’m actually quoted as two different...
PUBLIC SAFETY・8 DAYS AGO
The Independent

A transgender woman was badly beaten after being forced to share a jail cell with three men last year, leaving her with a jaw fractured in two places, according to a lawsuit.Kristina Frost is suing San Diego County and its sheriff’s department for damages, accusing them of negligence and failure to protect or deliberate indifference to safety risks and needs.According to the lawsuit, Ms Frost’s driver’s licence and other paperwork said she was a woman, and she had been wearing “feminine” clothes at the time of her booking.However, she was placed against her wishes in a “minimally monitored” cell with...
PUBLIC SAFETY・16 DAYS AGO
The Independent

Arthur Labinjo-Hughes: Six-year-old warned that his father ‘was going to kill him,’ court told

A six-year-old boy had warned people “for well over a year” before his death that his father would kill him but “nobody listened”, a murder trial has heard.Arthur Labinjo-Hughes died in June last year after suffering an “unsurvivable” head injury while solely in the care of his step-mother.His father Thomas Hughes, 29, and step-mother Emma Tustin, 32, are on trial at Coventry crown court accused of murder – which they both deny.Medical evidence shows Arthur would not have been able to inflict the injuries on himself, but Tustin maintains that she is innocent of murder.The step-mother has pleaded guilty...
PUBLIC SAFETY・1 DAY AGO

Brian Laundrie's parents have put up their Florida home for sale and seem to be looking to move away weeks after the discovery of their son's remains were found in an alleged suicide case. The couple has put up "for sale" signs in the front yard of their North Port,...
NORTH PORT, FL・1 DAY AGO
WashingtonExaminer

Bodies hanging from Mexico overpasses: Powerful drug cartels are back to their old tactics

Mexico's notorious drug cartels appear to have resumed some of its bloodiest tactics, after nine half-naked and tortured bodies recently were found hanging from a bridge on a federal highway in the Mexican state of Zacatecas. Mexican authorities said a tenth body was found on the ground, apparently falling before...
PUBLIC SAFETY・2 DAYS AGO
enstarz.com

Brian Laundrie's parents never spoke directly about their son since the case began. However, they chose to set their lawyer, Steve Bertolino, as the center of their communication. Since the beginning of the investigation, Chris and Roberta Laundrie had been making Bertolino speak on their behalf. The lawyer, who has...
PUBLIC SAFETY・1 DAY AGO
Indy100

A new viral video is making just about everyone cringe.In the clip, an emotional alleged MAGA rioter is seen starting to cry in front of FBI interrogators as he is being questioned. When asked about former President Donald Trump calling him to Washington D.C the waterworks NBC journalist Scott MacFarlane shared the clip on Twitter. He wrote, “NEW: Court orders release of video of FBI questioning US Capitol breach defendant Daniel Rodriguez. This is a first listen in the interrogation room. He questions election, cites Biden’s rallies and says he’s long been an InfoWars fan.”NEW: Court...
PUBLIC SAFETY・20 HOURS AGO
BBC

Three men holding "a large amount of money" offered to buy a woman's young daughter, police have said. The mother and child were walking along Batemoor Road, Sheffield, at about 08:20 GMT on Wednesday when three men approached her. When the woman refused and ran towards nearby Lower Meadows School,...
PUBLIC SAFETY・7 HOURS AGO
Business Insider

A Capitol police officer resigned after being charged with obstructing the January 6 investigation. Prosecutors have made a "tentative" plea offer to begin negotiations to resolve the criminal case. The former officer, Michael Riley, is due back in court in January 2022. The Justice Department has extended a "tentative plea...
PUBLIC SAFETY・2 DAYS AGO
MMAmania.com

If your plan is to become the next Scarface, or you simply want to rise through the ranks of the international drug trade en route to a lifestyle of money and blow, try to avoid using your home address — and personal cell phone — to conduct your illicit business.
PUBLIC SAFETY・2 DAYS AGO