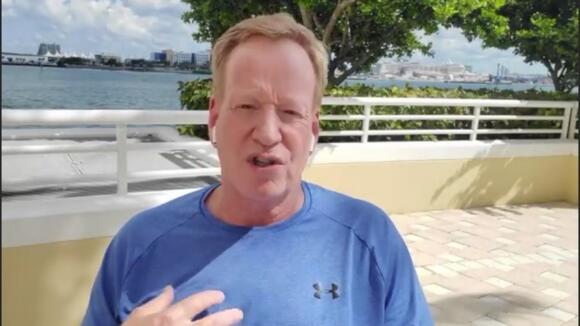 (KTXL) — Former Sacramento Kings broadcaster and popular radio talk show host Grant Napear has filed a lawsuit against the company that fired him following a controversial tweet, FOX40 has learned.

Napear has filed a wrongful termination lawsuit against Bonneville International, the owner of radio station KHTK where Napear worked for over two decades before a tweet abruptly ended his Sacramento career.

The complaint alleges wrongful termination, discrimination and retaliation in connection with Napear’s firing from his job at KHTK in June of 2020 following a contentious Twitter exchange. Napear was allowed to resign from his play-by-play job with the Kings on the same day.

The lawsuit is asking for damages, including lost and future wages and emotional distress.

In May 2020, just as protests across the nation began ramping up following the death of George Floyd, former Kings player DeMarcus Cousins tweeted at Napear, asking him, “what’s your take on BLM?” In response, Napear tweeted in part , “ALL LIVES MATTER…EVERY SINGLE ONE!!!”

The phrase “all lives matter” is considered by activists as an affront associated with criticism of Black Lives Matter.

“The timing of Grant’s tweet was particularly insensitive. After reviewing the matter carefully, we have made the difficult decision to part ways with Grant,” the company continued in its statement.

A representative with Bonneville International told FOX40 the company has no comment regarding the lawsuit.

Napear left Sacramento and started the podcast “If You Don’t Like That With Grant Napear.” He caught up with FOX40 late last year.

Read the lawsuit in full below.

Stay with FOX40 News for the latest on this story and hear from Napear as he has agreed to speak only with FOX40’s Mark Demsky tonight after Thursday Night Football.

cancel culture is what Grant got caught up in.. he is a loud mouth and voices his opinions and people don't like him for it.. I subscribe to the podcast and I don't believe he should have been dismissed for his comments..

Good for him. They let him go for no reason at all. Just because he did not support the terrorist group BLM.

if I could get on this jury I'd bury that company and all of its woke employees. 500M. Enough so he have DMC serving him like a slave when he's broke post career

(KTXL) — A candlelight vigil for Tyre Nichols was held Monday night at Regency Community Skatepark in Sacramento. Nichols, who was raised in Sacramento, died on Jan. 10, three days after being beaten by Memphis Police officers during a traffic stop. The news of his death reverberated around the Sacramento community, where Nichols spent his […]
SACRAMENTO, CA・17 HOURS AGO
FOX40

(KTXL) — Visitors can catch a glimpse of the Sacramento Zoo’s newest member, but only on a limited basis.  A video posted by the zoo on Friday shows a giraffe calf running around inside a barn at the facility. The female calf, who doesn’t have a name yet, is running around next to its mother […]
SACRAMENTO, CA・12 HOURS AGO
FOX40

(KTXL) — Sacramentans will have another chance to see Jo Koy in May.  The comedian added a second tour date at the Golden 1 Center for Saturday, May 7, the venue announced Monday. Koy’s first Sacramento show for his “World Tour” is occurring on Friday, May 6.  •Video Player Above: FOREIGNER’s upcoming summer Farewell Tour […]
SACRAMENTO, CA・13 HOURS AGO
FOX40

(KTXL) — California leaders are responding after having seen body camera footage of Tyre Nichols’s deadly encounter with Memphis Police.  Nichols was a Sacramento native, and his death has led to the charging of five now-fired Memphis officers.  “Jennifer and I send our deepest condolences to the family and friends of Tyre Nichols. Tyre Nichols […]
SACRAMENTO, CA・3 DAYS AGO
FOX40

(KTXL) — Country singer Luke Bryan will perform in the Sacramento region this summer.  The country music star will take the stage at the Toyota Amphitheatre in Wheatland on July 21. The Wheatland stop will be part of Bryan’s 36-city tour, which kicks off on June 15 in Syracuse, New York.  •Video Player Above: GoldenSky […]
WHEATLAND, CA・16 HOURS AGO
FOX40

These cities near Sacramento were named the top places for retirement. Here’s why

(KTXL) — A study revealed which California cities are the best for retirement with multiple being near the Golden State’s capital. According to a study from GoBankingRates, Vacaville, 35 miles west of Sacramento, was named the most affordable California city for retirement. •Video Above: Acampo students return to school after flooding Rent for a one-bedroom […]
SACRAMENTO, CA・4 DAYS AGO
FOX40

Marchers take to the streets in downtown Sacramento for Tyre Nichols

(KTXL) — Several people took to the streets of Sacramento after footage was released of Memphis Police’s encounter with Tyre Nichols.  The group had been marching up and down 10th Street. There was also a gathering at the State Capitol. And at a prior gathering at City Hall, Stevante Clark led those in attendance in […]
SACRAMENTO, CA・3 DAYS AGO
FOX40

(KTXL) — The Sacramento Police Department is investigating a shooting that occurred just after noon in South Sacramento. According to police, the shooting happened in the 6500 block of Freeport Boulevard. One person was taken to a local hospital with a gunshot wound. There is no further information at this time.
SACRAMENTO, CA・1 DAY AGO
FOX40

(KTXL) — A Sacramento chef is a semifinalist for a prestigious award.  Craig Takehara, chef, and co-owner of Binchoyaki, is one of 20 semifinalist for a James Beard Award in the California best chef category. •Video Player Above: Peet’s Coffee employees at Northern California location vote to unionize Takehara is the only semifinalist from the […]
SACRAMENTO, CA・4 DAYS AGO
FOX40

SACRAMENTO, Calif. (KRON) — A Tesla was in flames after the car’s battery compartment “spontaneously” caught fire on Highway 50, the Sacramento Metropolitan Fire District said on Twitter. Crews used approximately 6,000 gallons of water to put out a fire that damaged a Tesla Model S. The Tesla was traveling at “freeway speeds” when the […]
SACRAMENTO COUNTY, CA・1 DAY AGO
FOX40

Trails, parks and outdoor areas near Sacramento to stretch your legs and get some fresh air

(KTXL) — With hundreds of parks, endless miles of walking and hiking trails and beautiful waterways the Sacramento region has a lot of great places to explore on a nice day. Between Sacramento, Placer and El Dorado counties, there are countless places to stretch your legs and take in some fresh air. El Dorado County […]
SACRAMENTO COUNTY, CA・1 DAY AGO
FOX40

(KTXL) — The California Department of Parks and Recreation announced their 2022 Governor’s Historic Preservation Award Recipients on Thursday and one of the five buildings being recognized is in Sacramento. The Sacramento Municipal Utility District (SMUD) Headquarters Building at 6201 S Street was one of two Northern California buildings to receive the award. “(The SMUD […]
SACRAMENTO, CA・4 DAYS AGO
FOX40

(KTXL) — Singer-songwriter and guitarist John Mayer is going solo for his upcoming tour this spring with Sacramento as one of his stops.  Mayer is coming to the Golden 1 Center on April 8 as part of his “Solo Tour,” which will mainly consist of an acoustic set — meaning a band won’t back him […]
SACRAMENTO, CA・4 DAYS AGO
FOX40

(KTXL) — A community meeting will be held on Feb. 9 regarding renovations to Sierra 2 Park and Curtis Park, the city said.  Sacramento’s Department of Youth, Parks and Community Enrichment is holding the virtual meeting and community members will be able to attend virtually, as well. -Video Above: Rancho Cordova helps woman save dog […]
SACRAMENTO, CA・3 DAYS AGO
FOX40

SACRAMENTO, Calif. (KTXL) – Kings coach Mike Brown praises the way the Raptors beat up Sacramento in Wednesday’s 113-95 loss to Toronto, being held to a season low in points, the officiating in the game compared to what they experienced in the previous matchup, and not seeing his team show the physicality to fight back.
SACRAMENTO, CA・5 DAYS AGO
FOX40

(KTXL) — The Folsom Police Department are conducting a hate crime investigation after flyers with racist messages were found in a neighborhood on Friday morning, according to police. A resident contacted police that he found one of the flyers on his driveway and when officers arrived on scene several more flyers were found on sidewalks […]
FOLSOM, CA・3 DAYS AGO
FOX40

(KTXL) — The Golden 1 Center in Downtown Sacramento is known for being home to the Sacramento Kings, but the arena has also drawn big-name musical and comedy acts over the years. Golden 1 Center is the anchor of the Downtown Commons, a plaza filled with shops, restaurants, bars, and the Kimpton Sawyer Hotel.  Other […]
SACRAMENTO, CA・5 DAYS AGO
FOX40

Sacramento to open respite centers due to near-freezing temperatures

(KTXL) — The city of Sacramento is opening two respite centers overnight due to the near-freezing and below-freezing overnight temperatures that are expected across the region the last days of January and the first days of February. The Outreach and Engagement Center located at 3615 Auburn Boulevard will be open from 8 p.m. to 8 […]
SACRAMENTO, CA・13 HOURS AGO