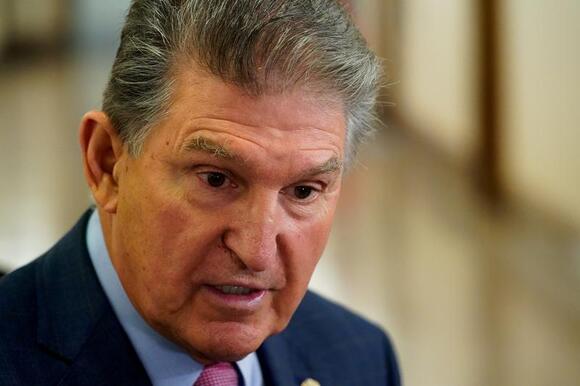 A day after dismissing as “bullshit” a Mother Jones report that he was considering it, Manchin told reporters he had discussed the possibility of becoming an independent “if I’m an embarrassment to my Democrat colleagues, my caucus, the president being the leader of the Democratic Party.”

“I said, me being a moderate centrist Democrat, if that causes you a problem, let me know and I’d switch to be an independent. But I’d still be caucusing with Democrats,” Manchin said. “That’s the only thing that was ever discussed. No one accepted that.” He did not specify the colleagues by name.

Manchin spoke as Democrats struggled to reach agreement on a Biden social agenda that is likely to be reduced from $3.5 trillion to below $2 trillion, as a result of opposition from Democratic moderates including Manchin and Senator Kyrsten Sinema.

The Senate is split 50-50 between Democrats and Republicans, with Vice President Kamala Harris, a Democrat, casting the tie-breaking vote, giving Manchin and Sinema powerful sway over the direction of legislation.

As a senator from West Virginia, a conservative state that relies on coal and has largely backed Republican politicians in recent years, Manchin has been at odds with many of his fellow Democrats over key aspects of Biden’s agenda, including its climate change provisions.

Mother Jones had reported on Wednesday that Manchin would first resign from his Democratic leadership post in the Senate and then register as an independent if Democrats did not scale back the spending bill further.

The Senate has two independent lawmakers who caucus with Democrats: Senators Bernie Sanders and Angus King.

Benjamin Ginsberg, a veteran Republican election lawyer, just issued a stark warning to lawmakers in his own party: If you don’t act now to protect our system, the losing candidate in the 2024 presidential election might seek to overturn the will of the people — and succeed. Opinions to start...
PRESIDENTIAL ELECTION・9 HOURS AGO
Markets Insider

WASHINGTON, Dec 5 (Reuters) - U.S. Representative Ilhan Omar said on Sunday that she is confident House Speaker Nancy Pelosi will take "decisive action" in coming days against Republican congresswoman Lauren Boebert, for remarks about Omar that have been decried as Islamophobic. Boebert described Omar, a Muslim who was born...
CONGRESS & COURTS・1 DAY AGO
Daily Mail

Democratic Senator Joe Manchin has said he intends to cross the aisle and join his Republican counterparts in a challenge to President Biden's vaccine mandate for private businesses. A vote is expected next week in the Senate on a 'resolution of disapproval' of the Biden administration's rule that requires businesses...
CONGRESS & COURTS・2 DAYS AGO

Chuck Schumer is prodding Democrats to swiftly approve the Biden spending bill within weeks. He warned that any delay would jeopardize the flow of child tax credit checks to families. 9 million kids could either slip below poverty line or fall deeper into poverty if Congress fails to act. Senate...
PRESIDENTIAL ELECTION・2 HOURS AGO
UPI News

Dec. 6 (UPI) -- Senate Democrats pushing President Joe Biden's nearly $2 trillion spending bill began negotiations with Parliamentarian Elizabeth MacDonough on what can be considered under budget reconciliation. In an effort to escape a Republican filibuster over the massive social spending and climate bill, Democrats must convince MacDonoough that...
CONGRESS & COURTS・6 HOURS AGO
Fox News

Former Senate Majority Leader Bob Dole died Sunday morning at age 98, prompting a flurry of reactions and condolences from Republicans and Democrats alike commemorating his nearly four decades of service. "It is with heavy hearts we announce that Senator Robert Joseph Dole died early this morning in his sleep,"...
CONGRESS & COURTS・1 DAY AGO

Bill to fund government through mid-February wins Senate report while US adds 210,000 jobs in November
PUBLIC HEALTH・2 DAYS AGO
The Baltimore Sun

Mayor Brandon Scott and fellow Maryland Democrats allowed themselves, if only briefly, to celebrate the U.S. House’s passage of a social safety net and climate change mitigation bill they extolled as “historic” and “transformative.” Their joy — and relief — last month at having cleared one obstacle to final approval of President Joe Biden’s “Build Back Better” package was tempered by the ...
BALTIMORE, MD・14 HOURS AGO
CNN

(CNN) — Bob Dole, a Republican Party stalwart and presidential hopeful who espoused a brand of plain-spoken conservatism as one of Washington's most recognizable political figures throughout the latter half of the 20th century, died Sunday. "Senator Robert Joseph Dole died early this morning in his sleep. At his death,...
U.S. POLITICS・1 DAY AGO
WGNO

The House on Thursday voted to pass a short-term spending bill to fund the government through mid-February, as lawmakers work quickly to avert a shutdown on Friday.
CONGRESS & COURTS・7 HOURS AGO

Democrats still must solve other disagreements, including over how to let people deduct more state and local taxes without making the provision a giveaway to the richest Americans. And there are other factors running out the clock.
PRESIDENTIAL ELECTION・5 HOURS AGO
city-countyobserver.com

WASHINGTON – Senator Mike Braun released the following statement last night following Senator Joe Manchin of West Virginia’s announcement that he has cosponsored the disapproval resolution under the Congressional Review Act for President Biden’s vaccine mandate for private businesses. With Senator Manchin’s support and all 50 Senate Republicans who have...
CONGRESS & COURTS・1 DAY AGO

Republican and Democratic politicians, including former Senate colleagues, are sharing condolences and memories commemorating the life of Bob Dole, who passed away at 98 on Sunday morning. The big picture: Dole, the Republican presidential nominee in 1996, was the longest-serving Republican leader in the Senate until 2018, when current Senate...
CONGRESS & COURTS・1 DAY AGO
Denton Record-Chronicle

WASHINGTON — Congress struck a deal Thursday night to keep the government open through February, after overcoming a threat from Sen. Ted Cruz and a few allies to force a shutdown unless funds for a vaccine mandate were cut off. Federal courts have blocked the mandate, which is aimed at...
CONGRESS & COURTS・3 DAYS AGO
Daily Beast

Biden’s Democrats Are a Joke and So Are Trump’s Republicans—Can’t Anybody Here Play This Game?

In 2020, Democrats were given a chance to lead. And while it’s too soon to declare this presidency an abject failure, things are not looking good. Joe Biden continues to be plagued by COVID-19, disappointing jobs reports, and anemic approval ratings. If all goes as expected, the Republican Party will recapture Congress next year. But then what?
PRESIDENTIAL ELECTION・2 DAYS AGO