Ghosts Gets Full-Season Order at CBS 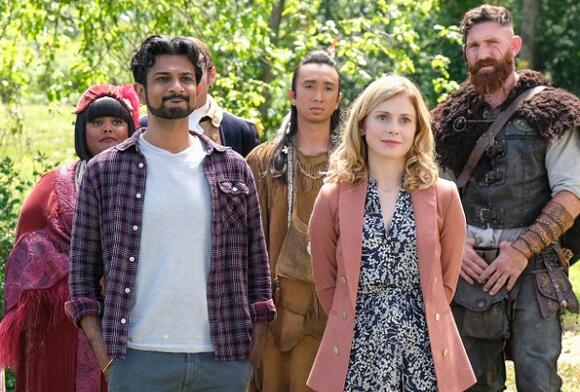 CBS is taking up residence with Ghosts , handing the freshman supernatural comedy a full-season order, TVLine has learned. (An exact episode count for Season 1 was not announced.)

Ghosts ‘ double-episode premiere averaged 5.5 million total viewers and a 0.6 demo rating, and the subsequent Oct. 14 episode actually ticked up in the demo. With Live+7 DVR playback factored in, the sitcom’s debut enjoyed the largest gain of all new and returning comedy premieres this season, adding 2.2 million viewers.

“We’re thrilled this spirited new comedy has struck a chord with viewers and critics alike and is off to a great start,” Thom Sherman, CBS Entertainment’s Senior EVP of Programming, said in a statement. “We’ve loved Ghosts since day one, and thank the outstanding executive producers, cast and writers for skillfully bringing to life the boldest, most unique comedy you’ll find anywhere on television this season.”

Ghosts — which is based on the BBC One sitcom — airs Thursdays at 9/8c. Are you excited for more episodes? Hit the comments to let us know!

Det. Kevin Bernard is back on the case. Anthony Anderson has joined Law & Order‘s upcoming revival at NBC, reprising the role he played on the flagship series, TVLine has learned. We hear that Anderson will be back for just one season of the procedural. In other very significant casting news, Hugh Dancy (Hannibal, The Path) is joining the continuation as an assistant district attorney. The continuation, which will be Season 21 of Dick Wolf’s original L&O series, will premiere on Thursday, February 24, 2022 at 8/7c. Spinoffs Law & Order: SVU and Law & Order: Organized Crime will follow at 9 and 10 pm, respectively. Law & Order...
TV SERIES・4 DAYS AGO
TVLine

The TVLine-Up: What's New, Returning and Leaving the Week of Nov. 21

This weekly feature is in addition to TVLine’s daily What to Watch listings and monthly guide to What’s on Streaming. With nearly 500 scripted shows now airing across broadcast, cable and streaming, it’s easy to forget that a favorite comedy is returning, or that the new “prestige drama” you anticipated is about to debut. So consider this our reminder to set your DVR, order a Season Pass, pop a fresh Memorex into the VCR… however it is you roll. This week, you’ll find 30 premieres (including the highly anticipated Hawkeye; the returns of Gossip Girl and Saved by the Bell; and...
TV SERIES・7 DAYS AGO
TVLine

Outlander fans can expect some snow this spring — and maybe a little ash, too. The show will return for its sixth season on Sunday, March 6, 2022 at 9/8c across all Starz platforms, TVLine has learned. The news was announced on Monday by Outlander author Diana Gabaldon at a launch event for Go Tell the Bees that I Am Gone, the ninth book in the series. The show’s upcoming sixth season is based on the sixth book, A Breath of Snow and Ashes. According to Starz, the show’s sixth season “sees a continuation of Claire and Jamie’s fight to protect those...
TV SERIES・5 DAYS AGO
tvseriesfinale.com

The Equalizer: Season Three? Has the CBS Crime Drama Series Been Cancelled or Renewed Yet?

Airing on the CBS television network, The Equalizer TV show stars Queen Latifah, Chris Noth, Lorraine Toussaint, Tory Kittles, Liza Lapira, Adam Goldberg, and Laya DeLeon Hayes. The story follows Robyn McCall (Latifa), an enigmatic woman with a mysterious background. She uses her extensive skills as a former CIA operative to help those with nowhere else to turn. To most, Robyn appears to be just an average single mom who is quietly raising her daughter (Hayes) and living with her aunt (Toussaint). However, to a trusted few, Robyn is The Equalizer, an anonymous guardian angel and defender of the downtrodden, who’s also dogged in her pursuit of personal redemption. Joining Robyn as champions of justice are her longtime friend and former CIA handler (Noth), an edgy bar owner and past colleague (Lapira), and a paranoid and brilliant white-hat hacker (Goldberg). As Robyn aids the oppressed and exploited, her vigilante work garners the attention of a shrewd NYPD Detective (Kittles). He once sought to uncover her identity, but now respects the need for Robyn’s type of justice, even as he often questions her methods.
TV SERIES・4 DAYS AGO

NBC announced its winter 2022 lineup, including the final season of “This Is Us,” which premieres on Jan. 4 at 9 p.m. On Mondays starting Jan. 3 “Kenan” will air its second season with a two-episode block at 8 p.m. and 8:30 p.m., followed by Jimmy Fallon’s variety game show “That’s My Jam” at 9 p.m., and “Ordinary Joe” will return with new episodes on this date at 10 p.m. In addition to “This Is Us,” Jan. 4 will see the time period premieres of “American Auto” and “Grand Crew” at 8 p.m. and 8:30 p.m., respectively, and the midseason premiere of...
TV SERIES・15 DAYS AGO
FanSided

Who is the ghost Claire sees in Outlander Season 4?

NCIS season 19 spoilers follow. NCIS has teased the introduction of a new character in the McGee family, played by Home Improvement star Patricia Richardson. In the upcoming episode 'Docked', which airs tonight (November 8) on CBS in the US, Richardson will join the cast as Tim McGee's mother-in-law. The...
TV SERIES・19 DAYS AGO
cartermatt.com

Dancing with the Stars season 31: Is it renewed, canceled at ABC?

Following the finale tonight, can you expect to see a Dancing with the Stars season 31? Or, is the long-running show getting canceled?. Of course, there are a lot of questions on our mind immediately about this before, for the time being, there is no clear answer. We do think there’s reason for optimism, but this show hasn’t had the same buzz it had for years now. There was initially a ratings bump in the 18-49 demographic after Tyra Banks stepped in as the new host/executive producer, but the change divided a lot of longtime viewers. At this point, the show is down over 20% in both total viewers and in the demo versus where it was in season 29.
TV SHOWS・5 DAYS AGO

Virgin River Season 4 Filming Complete: When Could it Premiere?!

Virgin River fans have been waiting for answers ever since Virgin River Season 3 concluded in July. Netflix renewed the romantic drama for two additional seasons earlier this year, and one of them has already finished shooting. Martin Henderson, who plays Jack, shared a photo on Instagram to reveal he...
TV SERIES・3 DAYS AGO
TVLine

The CW is recruiting one of the original 4400 for its reboot: Patrick John Flueger, who played returnee Shawn Farrell on the USA Network drama, will guest-star as Caleb, a charismatic figure from one of the 4400’s past, our sister site Deadline reports. Additionally, original series co-creator Scott Peters will direct an upcoming episode of the update. Airing Mondays at 9/8c, the CW drama follows 4,400 overlooked, undervalued, or otherwise marginalized people who vanished without a trace over the last hundred years and are all returned in an instant, having not aged a day and with no memory of what happened...
TV SERIES・5 DAYS AGO
Variety

NBC Releases First Trailer for ‘This Is Us’ Final Season

NBC has released the first trailer for the sixth and final season of “This Is Us,” giving audiences a first look at the send-off to the network’s critically acclaimed family drama series. “This Is Us” has been a smash hit for NBC since its first season premiered in 2016, with the show racking up impressive ratings and Emmy attention over the years. The series follows the family of the Pearsons across the multiple decades of their lives. Milo Ventimiglia, Mandy Moore, Sterling K. Brown, Chrissy Metz and Justin Hartley star in the series’ main roles, with each of them returning for...
TV SERIES・2 DAYS AGO
TVLine

Can Chicago P.D.‘s Atwater navigate a sticky situation? Will The Wonder Years‘ holiday episode be a gift? Will Manifest wrap Zeke’s story? Read on for answers to those questions plus teases from other shows.  (Email any brand-new Qs to InsideLine@tvline.com.) What’s coming up for Atwater on Chicago P.D.? –Demar “Atwater has some powerful episodes coming up this season,” showrunner Gwen Sigan tells Inside Line. “We’ll dive once again into his relationship with Celeste, a woman he cares deeply about but who isn’t aware he’s a cop. Atwater’s lies put him in a tricky position — both morally and on the job. It’s quite...
TV SERIES・4 DAYS AGO

Is The Equalizer Season 3 happening at CBS?

It’s not time to carve the turkey just yet, but we’re certainly feeling thankful for another jam-packed week of entertaining television. In our newest Quotes of the Week compilation below, we’ve gathered more than 15 of the small screen’s best sound bites from the past seven days, including scenes both scripted and unscripted from broadcast, cable and streaming series.
TV SERIES・6 DAYS AGO
cartermatt.com

Where are things going to pick up on the Power Book II: Ghost season 2 premiere this coming weekend? Well, things could be back to normal — or, “normal.” It’s honestly hard to know quite what normal is for Tariq St. Patrick. One thing we are sure of is that...
TV SERIES・11 DAYS AGO
cartermatt.com

Is The Neighborhood new tonight on CBS? Season 4 episode 8 talk

Is The Neighborhood new tonight on CBS? Within this article, we’re happy to dive a little more into that! While we’re at it, we’re also going to get even more into what the future will hold here. So where should we start? How about we go ahead and get some...
TV SERIES・12 DAYS AGO
Tell-Tale TV

It’s game night on Ghosts Season 1 Episode 8, “D&D!” This charming show keeps getting better and better. Jay’s relationship with the ghosts is ever-evolving, and this week he brings them into one of his favorite pastimes. To be more accurate, Jay only gets the idea to invite the ghosts...
TV SERIES・12 DAYS AGO
darkhorizons.com

Is Bob Hearts Abishola new tonight on CBS? Within this article, we’re happy to look into that! Plus, talk a little more about the road ahead through the remainder of season 3. So where are we starting off here? It feels like a good first order of business is passing...
TV SERIES・12 DAYS AGO
TVLine

Station 19‘s loss is Jack Ryan‘s gain. Okieriete Onaodowan, who recently wrapped his five-season run as Dean Miller on the ABC firefighter drama, is joining Prime Video’s Tom Clancy thriller in its fourth season as a new series regular, our sister site Deadline reports. All we know about Onaodowan’s character is that his name is Adebayo “Ade” Osoji. The actor is one of three new series regulars, along with Zuleikha Robinson (The Exorcist) as Zeyara and Louis Ozawa (Hunters) as Chao Fah. Derek Cecil (House of Cards) and Nancy Lenehan (People of Earth) will also recur in Season 4. Of course, it’ll...
TV & VIDEOS・4 DAYS AGO