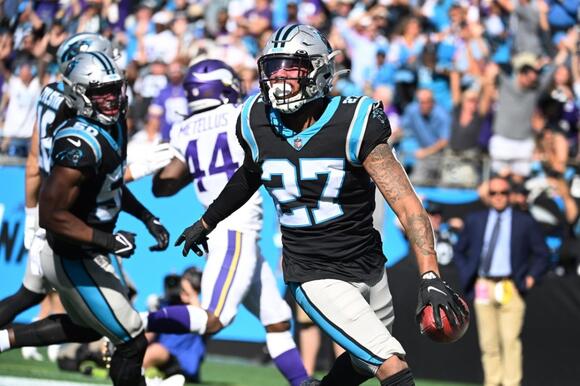 The Carolina Panthers have pointed out their designs on making changes after being pushed around too much in recent games.

The New York Giants need to change their formula as well.

So whatever team adapts best to any new tweaks might be in the best position for success when the Panthers and Giants meet Sunday afternoon in East Rutherford, N.J. 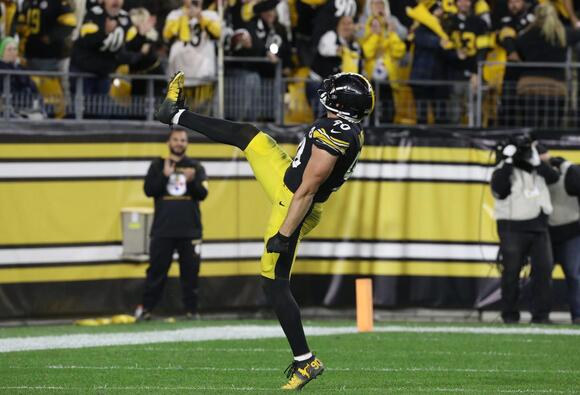 Panthers vs Giants: Carolina looking for more from Sam Darnold without CMC

The Panthers (3-3) are on a three-game skid, losing their past two at home. They’re 0-2 against NFC East members.

To avoid another slip-up against a team from that division, Carolina will have to figure out quite a few things on offense. That could boost a defense that might be getting worn down late in some games.

The Panthers had less than 27 minutes of possession time in Sunday’s overtime loss to the Minnesota Vikings , so that might have been part of Rhule’s concern.

The Giants (1-5) have given coach Joe Judge lots to assess as they try to get something going.

Panthers quarterback Sam Darnold had a strong start to the season, but his performance has faded drastically the past couple of weeks.

Rhule said a philosophy adjustment on offense is needed. It sure sounds as if he doesn’t intend for the Panthers to have such a wide-open approach.

“That’s going to change — I can tell you right now,” Rhule said. “You’ll see a vastly different look from us moving forward. We’re not going to line up and drop back and throw it 40 times a game and think that’s going to win the game for us.”

Carolina will remain without injured running back Christian McCaffrey . But Rhule said rookie Chuba Hubbard, who has 281 rushing yards this season , has shown the ability to pick up crucial yards.

While Darnold has received attention this year based on a few running plays for touchdowns, it’s Giants quarterback Daniel Jones who has been a more accomplished ballcarrier. In the past two-plus seasons, he’s the third-leading quarterback in the NFL in rushing yards with 903.

Both quarterbacks have interesting backgrounds regarding this matchup.

Jones will compete against his hometown team. He grew up in Charlotte, N.C., and then played college ball at Duke.

Darnold goes back to the stadium that was his home venue when he played with the New York Jets before the trade to Carolina during the offseason. This will be his 20th career start at MetLife Stadium. 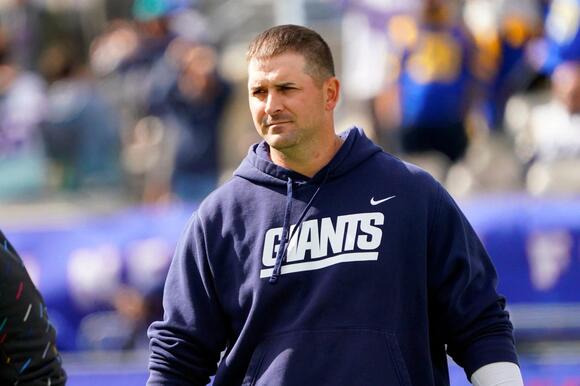 Also Read:
Time for the New York Giants to blow it up ahead of NFL trade deadline

There’s the notion that the Panthers haven’t been tough enough. It’s something that has been emphasized.

“It just hasn’t been acceptable, and I’m going to do everything I can to try to change that and make that better one step at a time,” Giants safety Logan Ryan said.

The Giants are awaiting word on the status of running back Saquon Barkley’s ankle injury.

“No hard timelines,” Judge said in regard to Barkley. “Obviously, we want to have him back as soon as possible.”

Devontae Booker has been filling in.

Cornerback Stephon Gilmore could be in the Carolina lineup as he works into playing shape after arriving in a trade from the New England Patriots.

Ex-Carolina kicker Graham Gano is with the Giants, perhaps a rough reminder for Panthers fans about the consistency the team once had in the kicking game. Former Panthers cornerback James Bradberry is coming off a solid outing in the Giants’ secondary.

Buccaneers quarterback Tom Brady has beaten every team in the NFL throughout his career but there’s one team that he loves to win against more than any other. It should come as no one’s surprise that it’s the New York Giants. Brady lost to New York twice in the Super Bowl while he was with New England, one of which came in 2008 when his team was vying for a perfect season.
NFL・14 DAYS AGO
The Spun

Despite leading the Carolina Panthers to a victory last Sunday, P.J. Walker will not start this Sunday against the Washington Football Team. Instead, Panthers coach Matt Rhule is handing the keys to his offense over to Cam Newton. That’s right, Newton will make his first start for the Panthers since...
NFL・17 DAYS AGO
96.1 The Breeze

The Buffalo Bills Quarterback room will have one open seat this year as they prepare for their Monday Night matchup against the New England Patriots. On Tuesday, the Bill announced that backup quarterback Jack Fromm was signed by the New York Giants from the Bills practice squad. Fromm was a...
NFL・6 DAYS AGO
Sports Illustrated

Check out odds, plays and more for the Carolina Panthers vs. Miami Dolphins NFL Week 12 matchup on November 28, 2021.
NFL・13 DAYS AGO

The Tampa Bay Buccaneers are set to host the New York Giants in front of a national audience Monday night, hoping to end a two-game losing streak and treat the home fans at Raymond James Stadium to a victory after nearly a month on the road. Key players will be...
NFL・14 DAYS AGO
phillyvoice.com

Week 12 NFL odds: Point spread and total for every game, including Eagles vs. Giants

Is the NFL's weekly slate better when it pits the bottom feeders of the league against some of its best teams, with double-digit spreads? Or when it matches them against each other for some of the season's most lame and unappealing matchups?. After a few weeks filled with upsets from...
NFL・14 DAYS AGO
Sports Illustrated

Week 12 NFL picks: Rounding up the experts' predictions for Eagles vs. Giants

The Eagles are suddenly one of the hotter teams in football, at least in comparison to where they were just a few short weeks ago. And after the Cowboys' loss to the Raiders on Thanksgiving, it's not just the wild card that's a possibility for Nick Sirianni's team. MORE ON...
NFL・10 DAYS AGO

Grading the Giants in NFL Week 12 vs. Philadelphia Eagles

The fact that the Giants won the turnover battle 4-0 — plus had two turnovers on downs — and they still almost lost the game falls entirely on the offense. They gained just 264 yards, scored just one touchdown, and were unable to close out the win in the fourth quarter when a drive stalled at the Eagles’ 16 (a false start by Matt Skura pushed them back from a third-and-2 there and led to a field goal) and they went three-and-out using just 23 seconds of clock after getting the ball off a fumble with 1:34 remaining. The only thing saving them from failing is that they did not turn it over themselves. Had they, it would likely have been a very different day for the Giants as a whole.
NFL・8 DAYS AGO
the buffalo bills

NFL sets date and time for Bills vs. Panthers | Week 15

The Philadelphia Eagles and the New York Giants are set to square off in an NFC East matchup at 1 p.m. ET on Sunday at MetLife Stadium. New York is 3-7 overall and 2-3 at home, while the Eagles are 5-6 overall and 4-2 on the road. The Eagles have won three of their last four games. The Giants have lost four of their past six games.
NFL・10 DAYS AGO
FanSided

The Giants, led by Daniel Jones and Saquon Barkley aim for a second consecutive victory Sunday against Tua Tagovailoa, Xavien Howard and the Miami Dolphins. The NY Giants (4-7), led by quarterback Daniel Jones, running back Saquon Barkley, and safety Xavier McKinney, take on the Miami Dolphins (5-7), led by quarterback Tua Tagovailoa, tight end Mike Gesicki, and cornerback Xavien Howard, on Sunday, December 5, 2021 (12/5/2021), in a Week 13 NFL game at Hard Rock Stadium in Miami Gardens, kicking off at 1p.m. on FOX.
NFL・8 DAYS AGO

Jared Goff completed an 11-yard touchdown pass to Amon-Ra St. Brown on the last play of the game and the
NFL・1 DAY AGO
NJ.com

What channel is Eagles vs. Giants on today? Time, TV schedule for NFL Week 12 game

The Philadelphia Eagles have played some of their best football of the season in recent weeks. They’ve won three of their last four, and they beat both the Broncos and Saints in decisive fashion the past two weeks. Jalen Hurts is playing like the dual threat he was drafted to be, having racked up 69 yards and three touchdowns last week against the Saints, including a dagger late in the game. While the Eagles still undoubtedly have an uphill battle in the division, five of their last six games are against the NFC East, including one against Dallas to close the season.
NFL・9 DAYS AGO
USA TODAY Sports Media Group

The New York Giants (4-7) will visit the Miami Dolphins (5-7) at Hard Rock Stadium in Miami Gardens, Florida on Sunday afternoon. Opening the week, the Giants were listed as 2.5-point road underdogs but that spread has ballooned a bit to +4.5 as of this writing. Let’s take a look...
NFL・4 DAYS AGO
Palm Beach Daily News

How to watch Miami Dolphins vs. New York Giants in NFL Week 13 on TV, live stream

The Miami Dolphins are clawing their way back into the playoff race. Tua Tagovailoa and Jaylen Waddle are looking like everything Dolphins fans hoped for, and Xavien Howard and Jaelan Phillips are bringing the defense back to 2020 levels. ...
NFL・5 DAYS AGO
Sportsnaut

It's the 13th Sunday of the 2021 NFL season and we're keeping you updated on all the action and biggest storylines throughout the day. The Week 13 slate has some fantastic matchups and storylines, and we're here to help you watch it unfold. Check back often to find out everything you need to know.
NFL・1 DAY AGO
Sportsnaut

20 most dominant NFL dynasties ever

What is the greatest dynasty in NFL history? When Tom Brady announced he was leaving the New England Patriots after
NFL・2 DAYS AGO