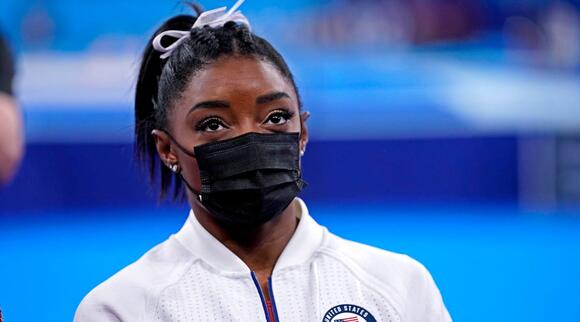 Simone Biles shared her struggles in returning after her bouts with "the twisties" in Tokyo.

Simone Biles detailed her difficulty returning to gymnastics following her withdrawal from the Tokyo Olympics and said she is "still scared to do gymnastics."

Biles withdrew from Team USA's team gymnastics final in Tokyo in July, noting her "mind and body are simply not in sync." Biles explained that she was suffering from the "twisties," which caused her to lose the sense of where her body was in the air while performing various twisting skills. Biles said Thursday she is still experiencing the issue as she returns to the sport.

Biles, 24, is a four-time Olympic gold medalist. She was among the four American gymnasts to testify in front of the Senate Judiciary Committee in September during a hearing on sexual abuse allegations against former USA Gymnastics doctor Larry Nassar . Biles criticized both USA Gymnastics and the U.S. Olympic & Paralympic Committee during her testimony, placing blame on both Nassar and "an entire system that enabled and perpetrated his abuse."

“To be clear, I blame Larry Nassar and I also blame an entire system that enabled and perpetrated his abuse,” Biles said . "The scars of this horrific abuse continue. The impact of this man's abuse will never be over.

"We have been failed and we deserve answers. It really feels like the FBI turned a blind eye to us."

Simone Biles makes smiley slippers chic. The four-time gold medal Olympian posed with French gymnast Melanie De Jesus Dos Santos while both wearing matching athleisure-wear that featured a gold stretch halter top and matching leggings. View this post on Instagram A post shared by Melanie De Jesus Dos Santos (@melanie_djds972) When it came down to the shoes, Biles sported a quirky pair of smiley face white slippers. Biles’ essential aesthetic consists of relaxed styles that align with her career and passions. Her personal tastes are on the pulse of being trendy while offering a comfy, efficient twist. Riddled throughout her Instagram feed are...
BEAUTY & FASHION・27 DAYS AGO
People

For Simone Biles, the Mental Health Journey Is Never Over: 'But I Know Who I Am Now'

As 2021 comes to an end, Simone Biles isn't dwelling on the year that could have been: "I fought hard. I survived." The superstar Olympic gymnast — who has won an impressive seven medals throughout her storied career — is one of PEOPLE's 2021 People of the Year alongside Dolly Parton, Sandra Oh, and America's teachers.
SPORTS・6 DAYS AGO
olympics.com

Katie Ledecky is back in action. The superstar swimmer returned to competition Wednesday (1 December) at the Toyota U.S. Open in Greensboro, North Carolina. It's the first competitive appearance for Ledecky since winning two gold and two silver medals at the 2020 Olympic Games in Tokyo, Japan. She was unsurprisingly...
GREENSBORO, NC・6 DAYS AGO
USA TODAY

After a sports shutdown in the early months of 2020 due to COVID-19, 2021 sports moments we’re thankful for perhaps shouldn't be contained to 10.
NFL・12 DAYS AGO

It was the largest media event in history — with more than 150 million Americans tuning in, an average of 15.6 million during the primetime slot and 5.5 billion minutes consumed through streaming — but the privilege of actually participating in it was only granted to a select few. It...
COLLEGE SPORTS・5 DAYS AGO
CNBC

Tokyo 2020 was an Olympic Games like no other, though likely not in the way its organizers had originally planned. With the Covid-19 pandemic underway and thousands of athletes' Olympic dreams hanging in the balance, the show had to go on — and it did, eventually. In late March 2020,...
SPORTS・4 DAYS AGO
CultureMap Fort Worth

Gymnastics fans who missed Simone Biles' high-flying moves when her Gold Over America Tour power-tumbled into Fort Worth's Dickies Arena — or awe-struck attendees who want to relive it — can settle in and watch from home this weekend. Biles, a Texan and the most decorated female gymnast of all...
FORT WORTH, TX・5 DAYS AGO
papercitymag.com

Clayton Katz showered with confetti as he jukes down the catwalk during the Una Notte Italia men's fashion fundraiser. (Photo by Daniel Ortiz) Serious sports fans couldn’t help but be gob smacked at the Una Notte in Italia gala benefiting Children at Risk. Although not walking the fashion runway with fellow sports greats, Olympian Simone Biles was certainly one of the stars of the night on the arm of her beau former Houston Texan Jonathan Owens, who did make the fashion parade. And there was another hometown Olympian favorite Carl Lewis.
HOUSTON, TX・14 DAYS AGO

Simone Biles's Beachside Braids Might Be the Longest She's Ever Worn

Simone Biles loves wearing braids. Her love for the protective style is undeniable, especially considering that we've seen her wear both bohemian and curly box braids this year. The Olympic gymnast has once again shown her love for braids in a tropical destination in an undisclosed location. Biles has posted...
CELEBRITIES・7 DAYS AGO
Click2Houston.com

HOUSTON – At the end of a tumultuous 2021, Houston’s own Simone Biles has claimed the cover of People magazine as one of the People of the Year. People wrote of Biles, “As 2021 comes to an end, Simone Biles isn’t dwelling on the year that could have been: ‘I fought hard. I survived.’ 🙏 The superstar Olympic gymnast — one of PEOPLE’s 2021 People of the Year — became a champion for mental health as she grappled with the intense pressure of competing on the Olympic stage this past summer in Tokyo. ‘That’s probably one of the first times in my career where I felt courageous and I felt like I had got to speak up for myself,’ she reflects now. ‘[I] definitely can walk away from Tokyo, feeling courage, feeling at ease. And I did everything I could.’”
HOUSTON, TX・6 DAYS AGO
WFAA

Simone Biles among honorees for 2021 People of the Year

Simone Biles is adding another accomplishment to her list: becoming an honoree for People Magazine’s ‘People of the Year.’. The Olympian was named alongside actress Sandra Oh, singer Dolly Parton and multiple U.S. teachers. People Magazine honored Biles for her withdrawal from some competitions during the Tokyo Olympics this summer....
CELEBRITIES・6 DAYS AGO
Los Angeles Times

2021 sports year in review: The year Simone Biles taught us it's OK to not be OK

Simone Biles, Naomi Osaka and other high-profile athletes pushed mental health issues to the forefront of conversations in sports and beyond in 2021.
LOS ANGELES, CA・18 HOURS AGO

Cycling New Zealand's High Performance Director Martin Barras has resigned after confirmation of an "integrity breach" during the Tokyo Olympics. An independent investigation into Cycling New Zealand's handling of athlete selection for the 2020 Olympics uncovered the breach of both Olympic and international cycling regulations. The investigation revealed that the process to replace an athlete during a cycling event in Tokyo had not respected IOC and UCI rules.
CYCLING・11 DAYS AGO
My Clallam County

Simone Biles named one of the People of the Year, 'White Men Can't Jump' remake, and more

Record breaking gymnast Simone Biles is one of the People of the Year! The seven-time Olympic medal winner joins Dolly Parton, Sandra Oh from Grey’s Anatomy, and National Teacher of the Year Juliana Urtubey, on the list of People Magazine’s 2021 People Of the Year. At the 2020 Summer Olympic...
SPORTS・6 DAYS AGO
Newsweek

Tom Daley is taking his knitting hobby to the next level, just in time for Small Business Saturday. The Olympic diving gold medalist, 27, has launched a line of knit kits through his website Made With Love By Tom Daley, after he and his knitting needles went viral at the Tokyo Olympics in August.
SPORTS・10 DAYS AGO
San Diego Union-Tribune

WNBA star Liz Cambage has been omitted from Australia preliminary squad for next year's Women's Basketball World Cup in Sydney after saying she has "zero" interest in playing again for the Opals
SAN DIEGO, CA・2 DAYS AGO
Sports Illustrated

A woman gymnast who stepped into an unexpected spotlight and a swimmer who made Olympics history were honored during the SI Awards.
SPORTS・5 HOURS AGO
Daily Mail

Great Britain’s swimmers receive a huge £1.5m increase in funding for the 2024 Paris Olympic Games after their record breaking performance in Tokyo

The record medal success of Great Britain’s swimmers at Tokyo 2020 has seen the sport receive a huge £1.5million increase in funding for Paris 2024. Team GB, led by Adam Peaty, collected eight medals in the pool at the Olympics in the summer – surpassing their previous best haul of seven at London 1908.
WORLD・4 DAYS AGO
Insider