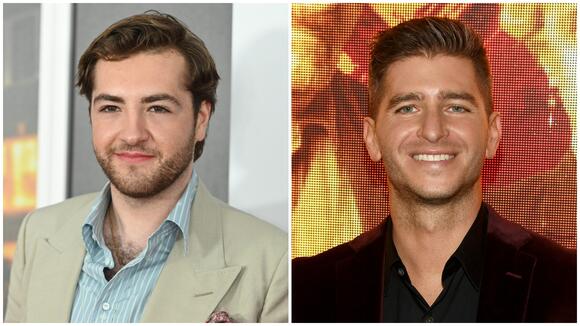 Michael Gandolfini and Zack Schor have joined the cast of “ The Offer ” at Paramount Plus , which tells the story of the making of “The Godfather.”

“The Offer” is a 10-episode series based on the experience of Oscar-winning producer Albert S. Ruddy (Miles Teller), detailing the behind-the-scenes events of the original 1972 film. Along with Teller, the series will star Matthew Goode as producer Robert Evans, Giovanni Ribisi as Joe Colombo, Colin Hanks as Barry Lapidus, and Dan Fogler as Francis Ford Coppola. Juno Temple also joined the cast as Bettye McCartt, Ruddy’s assistant.

Gandolfini will play Andy Calhoun, an unexpectedly savvy businessman on the hunt to buy Paramount. Schor will play Fred Gallo, the assistant director running the set of “The Godfather.”

This marks the second role for Gandolfini tied to an iconic mafia project. He most recently starred in the HBO Max film “The Many Saints of Newark,” which served as a prequel to “The Sopranos.” Gandolfini played a teenage Tony Soprano, the Emmy-winning role originally played by his father, James Gandolfini. Prior to that, he also appeared in projects like “The Deuce” on HBO, the Russo Brothers film “Cherry,” and “Ocean’s Eight.”

He is repped by WME, Sloane Offer, and Relevant.

Schor most recently appeared on the high-profile Amazon series “Hunters” as the younger version of Al Pacino’s character, Meyer Offerman. His other credits include “Bones,” “Entourage,” and “The 10 Year Plan.”

He is repped by Vanguard Management.

Jurnee Smollett has landed the female lead in “The Burial,” a new courtroom drama from Amazon Studios. The “Lovecraft Country” actor will star opposite Jamie Foxx and Tommy Lee Jones in the Maggie Betts-directed project. Based on a true story, the film follows a bankrupt funeral home owner who decides to sue a rival businessman over a handshake deal gone wrong. The owner hires a flamboyant attorney (Foxx) to handle the case. Smollett will play Foxx’s opposing counsel, sources said. Betts is directing from a script written by Doug Wright. Producers on the film include Bobby Shriver via his Bobby Shriver Inc....
MOVIES・14 DAYS AGO
Variety

What’s Coming to Disney Plus in December 2021

As 2021 comes to a close, Disney Plus is adding heaps of new titles for the holiday season. Subscribers can ring in the season with holiday programs including “Christmas…Again?!” on Dec. 3 and both “Home Alone 4” and “Home Alone: The Holiday Heist” on Dec. 17. The new titles follow the recently released “Home Sweet Home Alone,” starring Rob Delaney, Ellie Kemper and Archie Yates. The animated Colombian family film “Encanto” will be available for free on Disney Plus starting Dec. 24. The heartwarming and magical film, which features original songs written by “Hamilton” creator Lin-Manuel Miranda, is currently playing in theaters...
MOVIES・2 DAYS AGO
Variety

Nicolas Cage is set to play Dracula in Universal’s “Renfield,” a monster movie centering not on the infamous vampire, but rather his notorious lackey. The call sheet may be confusing. That’s because Cage is starring alongside another Nic, Nicholas Hoult, who is portraying the unhinged henchman known as Renfield. An origin story, the upcoming film is expected to take place in the present day. It’s not clear how much it will stick to the source material, Bram Stoker’s 1897 horror novel “Dracula.” In the literary thriller, R.M. Renfield was an inmate at a lunatic asylum. He was thought to be suffering from...
MOVIES・2 DAYS AGO
Best Life

Take a look at the new Netflix movie offerings for these first two weeks of November 2021, and you'll notice some patterns. With the holidays closing in and the end of the year approaching, there are plenty of new holiday movies and Oscar hopefuls to be found on the service. But that's not all that's just landed. In addition to a fairytale-like Santa origin story, a critically acclaimed period drama, and a new Western packed with movie stars, you'll also find some returning old favorites. So read on to see our picks for what movies to catch on Netflix this weekend.
MOVIES・20 DAYS AGO

Nicolas Cage playing a truffle forager who is on a mission to save his beloved truffle pig from violent assailants sounds a bit like a parody. So it may come as a surprise that not only is “Pig” real, and serious, it is also one of the year’s best reviewed films. And, it’ll be available to stream on Hulu starting Friday. In the Los Angeles Times review of writer-director Michael Sarnoski’s debut, critic Noel Murray writes that, “though its plot follows the same rough outline of a ‘John Wick’-style shoot-em-up, ‘Pig’ is actually a quiet and often melancholy meditation on loss, anchored by a character who wishes he could shake free of the person he used to be.” (AP Film Writer Lindsey Bahr)
MOVIES・8 DAYS AGO
ETOnline.com

Nicolas Cage is getting some real recognition for his latest film, Pig. The celebrated star walked the red carpet at this year's Gotham Awards, and opened up about the critical love for his indie drama. Cage joined co-star Alex Wolff at the star-studded show in New York City and the...
MOVIES・3 DAYS AGO
Outsider.com

The hit HBO series The Sopranos has left quite an impressive legacy. Some of the most iconic scenes on television have come from the ground-breaking cable series. Who remembers the moment Sal Bonpensiero got whacked while on Tony Soprano’s boat? Or Adriana’s final storylines on the award-winning series? Memorable moments for sure.
TV & VIDEOS・1 DAY AGO
The Hollywood Reporter

Guillermo del Toro's upcoming horror anthology Cabinet of Curiosities has already amassed a number of talented performers, with the project recently gaining yet another with Harry Potter star Rupert Grint, per Deadline. Given the nature of the anthology series, each episode will see a fresh batch of performers under the helm of different filmmakers, with it being unknown at this time which episode Grint will be starring in. He joins a cast featuring the likes of Essie Davis, Luke Roberts, and Andrew Lincoln from filmmakers such as Panos Cosmatos, Jennifer Kent, and Vincenzo Natali. Cabinet of Curiosities doesn't yet have a release date.
MOVIES・2 DAYS AGO
themanual.com

The Best Movies Available on Paramount Plus

We may think of it as a TV service today, but Netflix got its start mailing people DVDs. As new streaming competitors have emerged to compete with what Netflix has to offer, many of them have prioritized TV over movies, at least when it comes to marketing. Even so, both Netflix and all of these other services still have a library of movies available to subscribers that are willing to do a little digging to find a great gem.
TV SHOWS・10 DAYS AGO
seattlepi.com

Jennifer Esposito is writing and directing the film, marking her feature directorial debut. She will also act in “Fresh Kills” alongside Sciorra. Annabella Sciorra on Weinstein Verdict: 'We Can Never Regret Breaking the Silence'. Weinstein Attorney: Rape Claim Made Annabella Sciorra 'the Darling of the Movement'. Inspired by Esposito’s upbringing...
MOVIES・14 DAYS AGO
WUSA

With Creed III, Michael B. Jordan will be stepping behind the camera for the first time as a director, and Tessa Thompson couldn't be more excited for him. Thompson spoke with ET on the red carpet at this year's Gotham Awards in New York City on Monday -- where she was nominated for her performance in Passing -- and the actress opened up about Jordan's hotly anticipated Creed III.
MOVIES・3 DAYS AGO

New Movies On Demand: ‘Last Night In Soho,’ ‘The Many Saints of Newark,’ ‘Zeros and Ones,’ + More

Writer-director Abel Ferrara’s latest film, Zeros and Ones, starring Ethan Hawke is also out this week. Much of the film, about a soldier named J.J. who’s called to action when Rome is threatened by a mysterious terrorist bombing, was shot in Italy during lockdown, making the creepy, desolate vibe that much more unsettling.
MOVIES・13 DAYS AGO
Variety

Toni Collette, Anna Faris and Thomas Haden Church will star in “The Estate,” the story of two sisters who try to re-ingratiate themselves with their wealthy, estranged aunt when they discover she is ill. The film is from writer and director Dean Craig, who mined family dysfunction in the script for “Death at a Funeral.” Craig recently made his feature directorial debut with “Love Wedding Repeat,” a romantic comedy with Sam Claflin and Olivia Munn that debuted in 2020 on Netflix. Collette was nominated for an Oscar for “The Sixth Sense” and earned raves for her work in “Hereditary” and...
MOVIES・22 HOURS AGO
Variety

Samantha Boscarino, Griffin Johnson to Star in ‘Diamond in the Rough’ Movie From Creator Plus (EXCLUSIVE)

Spoiler alert! Do not proceed if you have not watched Peacock'sPsych 3: This Is Gus. Burton Guster is officially a married man and a dad!. Shawn's BFF celebrated two life milestones in one in the closing minutes of Peacock's Psych 3: This Is Us, which dropped Thursday, after embarking on an unexpected and often rocky roller-coaster when it came to learning the truth about Selene and her mysterious past. After learning the real truth behind her secret marriage to an ex-partner, Gus and Selene said their "I do's" the only way they could on Psych -- in the middle of the chaos of Selene giving birth to their baby boy. And, of course, Shawn was the one to deliver the baby.
MOVIES・13 DAYS AGO
Variety

Fresh off his Gotham Award win for breakthrough series, “Reservation Dogs” co-creator Sterlin Harjo is developing a new miniseries with a Native female lead at FX. The untitled series will see Harjo direct, as well as co-write with bestselling novelist Jonathan Lee. Harjo will also executive produce with Garrett Basch, through the latter’s new label Dive. While plot details are under wraps, the title is described as a heist thriller centered around a Native woman. “Reservation Dogs,” co-created with Oscar winner Taika Waititi, represented a notable hit this year as an FX on Hulu exclusive. Shot entirely on location in Oklahoma, it boasted...
TV SERIES・19 HOURS AGO
SFGate

The project is in the early stages so details are scarce, but sources say it would incorporate comedy elements beyond traditional stand up and would dive into the Nigerian-American experience. Orji will write and executive produce in addition to starring. Odenkirk Provissiero’s DC Wade will also executive produce along with and Art & Industry’s Michelle Caputo and Shannon Hartman, who all previously worked with Orji on her HBO stand up special “Momma, I Made It!”
TV SERIES・14 DAYS AGO
Variety

Big news for Paul Thomas Anderson’s awards campaign as his film “Licorice Pizza” was named the best picture of the year by the National Board of Review. The MGM and United Artists Releasing movie also picked up prizes for directing, and shared the breakthrough performance award for newcomers Alana Haim and Cooper Hoffman. Another newcomer having a great day is Latina Rachel Zegler, who won best actress for her turn in Steven Spielberg’s “West Side Story.” She is just the second Latina to ever win the category since Fernanda Montenegro in “Central Station” (1998). Will Smith has kicked off his awards race...
MOVIES・19 HOURS AGO