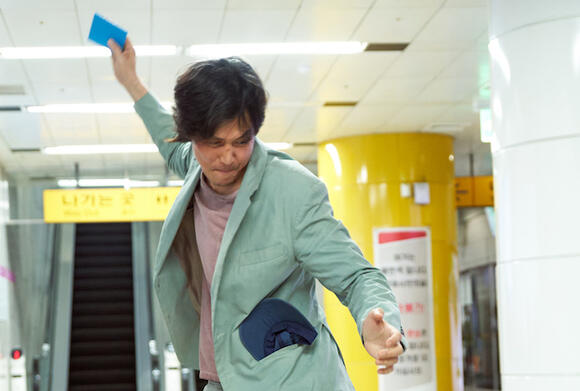 Squid Game now sits firmly atop the latest Nielsen streaming rankings, after failing to crack the Top 10 with its first (but only partial) week of release.

For the Week of Sept. 20, the Netflix megahit amassed 1.9 billion minutes viewed across its nine episodes, easily besting all other original streaming series.

Rounding out the Top 10 for the week of Sept. 20 were Netflix’s The Circle , Clickbait and The Great British Baking Show , the first six episodes of Hulu’s Only Murders in the Building , and Netflix’s Monsters Inside: The 24 Faces of Billy Milligan .

Squid Game ‘s rapid ascendance on the Nielsen chart comes as no surprise. The Korean series about 456 people who are lured into playing (incredibly) deadly versions of children’s games currently stands as Netflix’s most sampled debut ever, having reached 142 million accounts in its first 28 days. (Netflix counts two minutes of any program as a “view,” though their methodology is changing .) In doing so, Squid Game surpassed the period romance Bridgerton , which in its first four weeks was sampled by 82 million accounts.

The TVLine-Up: What's New, Returning and Leaving the Week of Nov. 21

This weekly feature is in addition to TVLine’s daily What to Watch listings and monthly guide to What’s on Streaming. With nearly 500 scripted shows now airing across broadcast, cable and streaming, it’s easy to forget that a favorite comedy is returning, or that the new “prestige drama” you anticipated is about to debut. So consider this our reminder to set your DVR, order a Season Pass, pop a fresh Memorex into the VCR… however it is you roll. This week, you’ll find 30 premieres (including the highly anticipated Hawkeye; the returns of Gossip Girl and Saved by the Bell; and...
TV SERIES・6 DAYS AGO
TVLine

The CW is recruiting one of the original 4400 for its reboot: Patrick John Flueger, who played returnee Shawn Farrell on the USA Network drama, will guest-star as Caleb, a charismatic figure from one of the 4400’s past, our sister site Deadline reports. Additionally, original series co-creator Scott Peters will direct an upcoming episode of the update. Airing Mondays at 9/8c, the CW drama follows 4,400 overlooked, undervalued, or otherwise marginalized people who vanished without a trace over the last hundred years and are all returned in an instant, having not aged a day and with no memory of what happened...
TV SERIES・4 DAYS AGO
TVLine

Holidays can be a joyous time with family — or a wonderful time to catch up with Friends. The 1990s sitcom made Thanksgiving an annual tradition — except for that one year where Ross was preoccupied with the world’s most unnecessary pros-and-cons list (Julie, really?!) — leaving millions of viewers to anticipate how the Central Perk dwellers would celebrate the gluttonous occasion. Whether the holiday was marked by the disappearance of a certain Macy’s Parade staple, or the arrival of A-list guest stars like Brad Pitt and Christina Applegate, you knew to expect something special.
TV & VIDEOS・2 DAYS AGO
NBC4 Columbus

Too many TV streaming services: How many do you need?

(WCMH)–This is the best of times and the worst of times to be a TV viewer as a proliferation of streaming services means more options than ever before. But it’s getting confusing and expensive as well, and many viewers are growing frustrated. Jean Koverman recently decided to cut the cable cord and stream her TV […]
TV SHOWS・2 DAYS AGO

Most Profitable TV Shows of All Time

Throughout the years, a multitude of amazing television shows have graced the airways. While some have simply entertained a niche fan base, others have turned into cult classics syndicated for...
TV SHOWS・2 DAYS AGO
Imperial Valley Press Online

NEW YORK (AP) — Netflix on Tuesday rolled out a new website that measures its most-viewed films and series by the amount of hours users spend watching them. The results? People are watching “Squid Game” and the new action-adventure film “Red Notice” maybe even more than you would have guessed.
TV & VIDEOS・10 DAYS AGO
The Spokesman-Review

The creator of the wildly popular South Korean hit TV show “Squid Game” is planning a second season. The nine-part Netflix global sensation has been watched by more than 110 million people internationally and became the company’s most-watched series launch in its history since it premiered in September. “We are...
TV SERIES・13 DAYS AGO
Deadline

Netflix has published its first weekly top ten lists spanning series and films with Narcos: Mexico and Squid Game taking the top TV spots. The streamer revealed at its third quarter financials that it was shaking up the way that it measures and releases ratings data, switching from reporting on the number of households that watch a series or film to reporting on hours viewed. Today, Netflix firmed up exactly what that will look like with Pablo Perez De Rosso, VP of content strategy, planning & analysis calling it an “important step forward” for the company. The first tranche of data includes numbers...
TV SERIES・10 DAYS AGO

Netflix subscribers across the globe have collectively watched 2.1 billion total hours of Squid Game through Sunday, according to the streamer’s new public popularity charts. For context, that figure is equivalent to more than 239,700 years. In Squid Game‘s first 28 days on the platform, the series received 1.65 billion...
TV SERIES・9 DAYS AGO
TVLine

Netflix and Riot Games announced on Saturday evening that Arcane, the animated series set in the League of Legends video game universe, has been renewed for Season 2. The news came just hours after Season 1’s final three episodes premiered on the streamer. “We’re beyond happy about the positive response to Arcane‘s first season and are working hard with the creative wizards at Riot and Fortiche to deliver our second installment,” series co-creators Christian Linke and Alex Yee said in a statement. Hawkeye‘s Hailee Steinfeld (who voices Vi), Yellowjackets‘ Ella Purnell (Jinx) and Harry Potter‘s Katie Leung (Caitlyn Kiramman) are all confirmed to...
TV SERIES・6 DAYS AGO
TechRadar

It’s no secret that Squid Game is now the most popular Netflix show of all time, but new figures reveal just how popular Hwang Dong-hyuk’s survival drama became in its first four weeks of release. In recent data published as part of the streamer’s revised viewership measurements, Netflix claims that...
TV SERIES・10 DAYS AGO
TheWrap

Streaming service beats measurement company at its own game — sort of. Welp, they finally did it: Netflix has launched a weekly “Top 10 on Netflix” website to report its own viewership data based on hours watched of its films and TV shows, counting both English and non-English language titles.
TV SHOWS・10 DAYS AGO

Here’s What We Know About Squid Game Season 2

Everyone’s Netflix habits are different. But every so often there comes a cultural phenomenon that gets everybody watching the same thing on a streaming site. At the start of the pandemic, it was Tiger King, and now a year later, we have Squid Game. The Korean Netflix drama really took the world by storm when it was released, making a lot of people fans of the show. I include myself in that category and actually binged the entire thing in one weekend because I couldn’t get enough of the show.
TV SERIES・13 DAYS AGO
KFI AM 640

Viewers spent 2.682 billion minutes watching the 30 episodes of the psychological thriller the week of Oct. 18-24, 38.4% more than the 1.938 billion minutes watched the previous week when its third season was available for three days.
TV SERIES・8 DAYS AGO
martechseries.com

Broadcast and streaming neck and neck as sports and new content continue to attract viewership according to The Gauge. Nielsen announced that The Gauge, its monthly total TV and streaming snapshot, revealed that in October 2021 the broadcast share of consumer’s total TV increased 2% from September 2021 and now accounts for 28% of their total screen time.
NFL・8 DAYS AGO
ComicBook

Squid Game Falls Out of Netflix Top 10 for First Time

Even though Netflix's Squid Game continues to put up impressive viewership numbers the series has finally been pushed out of the Top 10 on the streaming service in the United States. Though the South Korean original is still in the Top 10 TV Shows on Netflix in the US (barely making it as it sits at the lowest position) the show has fallen out of the true Top 10 on Netflix's homepage, a first for the series since it premiered in September. The full Top 10 for Netflix in the United States as of this writing includes:
TV SERIES・6 DAYS AGO