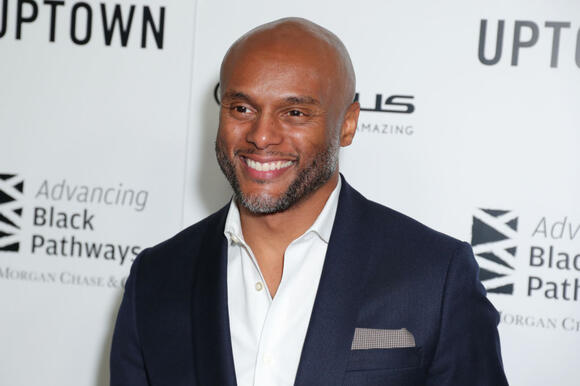 Ahead of his upcoming tour, the ageless singer checked in virtually to the Houston BMW Studios with Funky Larry Jones and Ali Siddiq to discuss his brand new album Here To Stay but also him hitting the road with his wife, Judge Faith . The “Not Too Busy” singer revealed not only every lyric and song was inspired by his wife, she was the muse for every single note!

The couple has been married for nearly two years now and have found themselves closer than ever even with the pandemic.

In Lattimore’s words, the two met through mutual friends and their Houston connection resides with gospel producer Aaron Lindsey and thought the two would be good for one another. “You and Faith are on the same soundwave when I talk to her and maybe you should just meet each other.” Lattimore recalls Lindsey telling him. “So we hooked up to do lunch and talked for hours and just developed a relationship that led to marriage and happiness.”

He added, “I think Aaron sent her the sexiest picture he could find of me and then he sent me a picture of her that was so gorgeous of her because she was in Miss America and part of the pageant world. He jokes about that, ‘Let me send the right picture so they can see each other in the right light!’

The purpose of the duo’s new tour not only promotes her new book, Sis Don’t Settle but also brings Lattimore back to the stage for the first time since the pandemic. “I’m grateful for a wife that women respect,” Lattimore told Uncle Funky and Ali and in his words, he’s thankful for every morning he gets to wake up next to his wife.

“My Lord, she gets up before me. So when I wake up and open my eyes, I say, ‘Ah, she’s still here.” Lattimore says. “I feel like I’m in an awesome place in my life. What I have to give right now is at a greater level.”

Watch the full interview with the trio up top!

Awww!! This so beautiful that he found love and happiness 😊 & they are a team. Ain't God good!! He will make you leave the headache and find a blessing. Amen 🙏!!

So happy for them. He sings the most beautiful love songs.Therefore, I am thankful he is truly experiencing the love that he sings about.

Aww!! I did not know, and I can honestly say I love these two separately from their professions “ I’m happy for them” May they have many more happy years together and God keep there family blessed and safe!!

The 'Divorce Court' judge's dating history, getting married after 40, and what she's seen in the courtroom led to her writing her first book. “Pain is inevitable but suffering is optional,” says Judge Faith Jenkins. It’s one of many lessons she’s learned in life about love, and it’s a message she’s sending in her first book, Sis, Don’t Settle: How to Stay Smart in Matters of the Heart, out now. The inspiration for the work came from both her personal and professional experiences.
RELATIONSHIP ADVICE・6 DAYS AGO
RNB Cincy 100.3

On today's "Gary's Tea," the family loyalty of Kevin Hunter Jr. is brought into question after he was seen partying and state-to-state galavanting while mom Wendy Williams sits at home in NYC recovering from COVID-19.
CELEBRITIES・26 DAYS AGO
Bossip

Toya Bush-Harris is sharing a peek into her wintery getaway with husband Dr. Eugene Harris. The Married to Medicine cast member took to Instagram to share the sweetest photo with her spouse during their recent ski trip in Aspen. On November 27, Toya offered a glimpse into her quality time...
FAMILY RELATIONSHIPS・7 HOURS AGO

Earlier this year, fans' fears were confirmed by reports that Wendy Williams has serious health problems. That is why she has not returned to the show, temporarily replaced by a rotation of guest hosts. In some ways, Wendy has never been more popular -- but fans shouldn't expect to see...
CELEBRITIES・5 DAYS AGO
Popculture

Indian actor Yusuf Hussain has passed away at the age of 73 after contracting COVID-19. The Tribune India reports that Hussain, best known for his roles in Dhoom 2, Raees, and Road to Sangam passed away on Saturday at Lilavati Hospital in Mumbai. His son-in-law, filmmaker Hansal Mehta, who is...
PUBLIC HEALTH・24 DAYS AGO
rolling out

Nick Cannon has hinted he wants more children. The “Wild ‘N Out” star – who has 10-year-old Moroccan and Monroe with ex-wife Mariah Carey; Golden, 4, and Powerful Queen, 10 months, with Brittany Bell; Zion and Zillion, 4 months, with Abby De La Rosa; and Zen, also 4 months, with Alyssa Scott — recently pledged to stay celibate for some time, but now says he’s open to the idea of fathering more kids.
FAMILY RELATIONSHIPS・17 DAYS AGO
TVShowsAce

Heath Freeman Dead: ‘Bones’ Actor Passes Away In His Sleep

Heath Freeman, who graced the small screen as a calculating killer on Fox’s “Bones,” passed away on Sunday. He was 41. Freeman’s demise was first announced by his pals in the industry, with Shanna Moakler being among the first to pay tribute to him on social media. The model turned...
CELEBRITIES・13 DAYS AGO
US Magazine

Supportive! Kim Kardashian is still exploring her relationship with Pete Davidson, but he has already won over her famous family. “The family is happy for Kim, and they really have taken a liking to Pete,” a source exclusively tells Us Weekly. “A lot of the Kardashians met him in the past and have hung out with him, so he’s not like this new stranger that just entered into their lives. They think he’s funny and is fun to be around. He’s someone that just lightens the mood in the room.”
CELEBRITIES・9 DAYS AGO
bravotv.com

Cynthia Bailey's Curve-Hugging Catsuit Is Even Sexier from the Side

As if the early release of The Real Housewives Ultimate Girls Trip wasn't good enough already, The Real Housewives of Atlanta alum Cynthia Bailey gave fans a look at her premiere day outfit marking the occasion in style. Rocking a sexy black cut-out catsuit, the model posed on a balcony while she was "taking a minute to enjoy the view."
ATLANTA, GA・9 DAYS AGO
HollywoodLife

Natalia Bryant looked drop-dead-gorgeous in a high-slit pink gown when she attended the Baby2Baby Gala in LA on Nov. 13. When it comes to Natalia Bryant, 18, she always looks stunning no matter where she goes and that’s exactly what she did when she attended the Baby2Baby Gala in West Hollywood on November 13. For the event, Natalia slayed in a one-shoulder bubblegum pink down with a cinched-in waist and a plunging slit on the front of her skirt.
WEST HOLLYWOOD, CA・13 DAYS AGO

Willow Smith kicked off her 21st birthday with an epic Halloween party in a costume that made fans lose it. The Whip My Hair crooner looked beyond stunning as she transformed into Brad Pitt’s Fight Club character Tyler Durden for the fete, giving the look a high-fashion twist we won’t soon forget.
BEAUTY & FASHION・27 DAYS AGO
hotnewhiphop.com

As noted in her Instagram bio, 42-year-old Coco Austin is a “super mom” to her daughter, Chanel, which means the two spend plenty of time together. The Los Angeles native frequently shares content with her daughter on social media, and over the weekend, the young girl’s grandma even got in on the fun.
CELEBRITIES・1 DAY AGO
People

Michael B. Jordan and Lori Harvey are getting into the Thanksgiving spirit. On Instagram, Harvey gave fans a look at the delicious Thanksgiving spread — including mac and cheese, cornbread, turkey, salmon, potato gratin, spaghetti and more — as she poked fun of her boyfriend as he tried the food.
CELEBRITIES・3 DAYS AGO
Insider

Pete Davidson says he takes women to good restaurants in case he's a "shitty" date. Speaking on "River Cafe Table 4" podcast, he said if he's a bad date, "at least the food was great." Davidson also told host Ruthie Rogers that dates who are rude to waiting staff are...
BEAUTY & FASHION・11 DAYS AGO
HelloBeautiful

Happy 36th birthday to Joseline Hernandez! Let's "do it like it's her birthday" and look back at five times the reality star served lewks!
BEAUTY & FASHION・25 DAYS AGO
countryliving.com

Tamron Hall is incredibly grateful for her Tam Fam. On Monday, the broadcast journalist got overwhelmed while celebrating the exciting news that her ABC daytime talk show Tamron Hall has been renewed for two more seasons. Joining Tamron in the official announcement video was her 2-year-old son, Moses, who despite...
CELEBRITIES・16 DAYS AGO
TVShowsAce

Khloe Kardashian isn’t letting COVID hold her back. She is posting new photos on Instagram and they are totally showing off her body. Needless to say, she looks stunning. Former Keeping up with the Kardashians star, Khloe Kardashian, is showing off her body on her social media platform. Khloe is wearing an interesting bodysuit that sort of resembles a morph suit. The outfit covers her entire body. It includes swirls of black, white, and brown in the interesting design. Not only that, but the ensemble seems to be a bit see-through. While she isn’t really revealing anything, she is certainly alluding to it.
TV SHOWS・20 DAYS AGO
E! News

Watch: Cynthia Bailey Talks Reuniting With NeNe Leakes. NeNe Leakes has some unfinished Bravo business to attend to. The former The Real Housewives of Atlanta fan favorite dished during The Real on Thursday, Nov. 4 that she is open to returning to the hit reality TV franchise—albeit, with a few contingencies.
CELEBRITIES・24 DAYS AGO