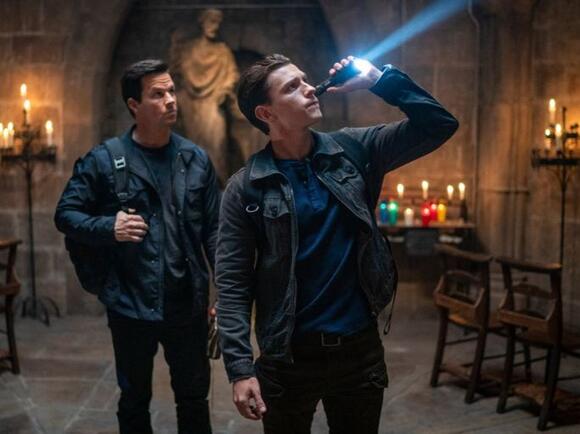 The first trailer for the Uncharted film starring Tom Holland and Mark Wahlberg has been released.

The film will feature Holland as a younger version of video game hero, Nathan Drake, and Wahlberg as his mentor, Sully.

The trailer features several nods to scenes from the popular video game series, which follows Drake and Sully as they embark on adventures to recover lost treasure.

One scene – Drake being dragged behind a cargo plane – is taken right out of Uncharted 3, while the brief glimpse of a pirate ship is also from the same game.

Languishing in development hell for many years, Uncharted has gone through a series of directors – including David O Russell and Shawn Levy – before finally settling on Venom filmmaker, Ruben Fleischer.

Several other actors, including Wahlberg, Chris Pratt and Nathan Fillion, were rumoured for the role of Drake before Holland was cast.

The highly anticipated blockbuster has had fans reacting online with many split between loving and hating it. Much of the criticism is levelled at the casting of Holland who is much younger than Drake is in the video game.

Some fans also noticed the similarity between Holland’s role and his performance as Spider-Man in the Marvel Cinematic Universe.

Uncharted will be released on 18 February 2022.

What 'Spider-Man: Into the Spider-Verse' Creator Phil Lord Thinks of 'No Way Home'

Every actor who has played Spider-Man in a movie, ranked from worst to best

Spider-Man is one of the most well known superheroes. Several actors have become famous playing the role. Here we list where Tobey Maguire, Tom Holland, and others rank. 11. Jorma Taccone ("Spider-Man: Into the Spider-Verse," 2018) Jorma Taccone, who is known best as a member of The Lonely Island and...
MOVIES・29 DAYS AGO
CinemaBlend

Mark Wahlberg Is Getting Into The Tequila Game, Reportedly Has A Fun Idea To Face Off Against The Rock And George Clooney

Celebrity alcohol brands are getting pretty creative in their advertising these days. Mark Wahlberg, action star and one of the leads in Sony’s new Uncharted prequel, just proved that point again, and he didn’t have to do much. All it required was for him to get into the tequila game and reportedly have a fun idea to face off against fellow liquor brand magnates Dwayne “The Rock” Johnson and George Clooney. You know, as one would normally do in such a case.
CELEBRITIES・8 DAYS AGO
NME

Zendaya responds to Tom Holland’s interest to star in ‘Euphoria’

Zendaya has commented on Tom Holland’s interest to star in HBO series Euphoria. The pair have co-starred in the new Spider-Man trilogy as Peter Parker and MJ since 2017, with Holland having previously said he would be keen to join Zendaya in Euphoria after visiting the set during the filming of season two.
CELEBRITIES・10 DAYS AGO

Chaos reigns in the mind of Steven Grant. Or is that Marc Spector? Dueling personalities come to a head in Marvel Studios’ Moon Knight, based on the cult comic hero of the same name, and created by head writer Jeremy Slater. Unlike Marvel Studios’ previously released Disney+ series, all existing in and impacting the larger MCU, Moon Knight, isn’t anchored by a character familiar to audiences who have been following along with in the MCU for the past 14 years. The series is anchored by Oscar Isaac, which has certainly drawn increased interest in the character. Still, Moon Knight is something...
MOVIES・2 DAYS AGO
The Hollywood Reporter

Actor Glen Powell has teamed up with Fast & Furious writer-producer Chris Morgan for Deputy X, a sci-fi action-thriller set up at Universal Pictures. Powell will star and helped come up with the idea and concept for the project, which is intended to be a high-concept franchise starter for the actor. Morgan, who has a long-standing relationship with the studio thanks to his work as writer and producer on seven of its Fast movies, will produce along with Ainsley Davies, the head of development at his Chris Morgan Productions. Jack Paglen, whose previous credits include Transcendence starring Johnny Depp and Alien: Covenant, will...
MOVIES・1 DAY AGO
Cassius

Things are about to get extremely dark and trippy with Marvel Studios' next original Disney+ series Moon Knight.
TV & VIDEOS・2 DAYS AGO
Deadline

EXCLUSIVE: Finding Neverland, World War Z and The Kite Runner director Marc Forster has been set to direct Oscar winner Tom Hanks in the anticipated U.S. adaptation of Swedish comedy hit A Man Called Ove, we can reveal. Two-time Oscar nominee David Magee (Life of Pi, Mary Poppins Returns) is scripting the project and re-uniting with Forster after their collaboration on drama Finding Neverland, for which both were BAFTA nominated. Production is due to begin this year on the feature, which has been in the works for a few years and is based on the Swedish hit novel by Fredrik Backman. The life-affirming comedy about love and...
MOVIES・2 DAYS AGO

Mark Wahlberg Getting in the Tequila Business with Flecha Azul

Mark Wahlberg is a savvy businessman -- with his own line of gyms and burger joints -- but now he's taking on the tequila world with his sights set on some of the biz's celeb heavy-hitters. A rep for Mark tells us he recently became a principal investor in Flecha...
CELEBRITIES・8 DAYS AGO
Outsider.com

On Tuesday (January 11th), Hollywood actor Mark Wahlberg took to his Instagram to wish his daughter, Grace, a special happy birthday in a sweet but hilarious video. In the video, Mark Wahlberg, who is rocking a mustache, declares while kissing Grace at the top of her head numerous times, “Happy birthday, big 12 year old. I am so proud of you. My angel. Happy birthday. Love you. TWELVE. Oh my God! Another pre-teen.”
CELEBRITIES・9 DAYS AGO
Wyoming News

The 'Harry Potter' star to play the prince of parody, another honor for Benedict Cumberbatch, and a look at Oscar Isaac as 'Moon Knight.'
CELEBRITIES・1 DAY AGO
HipHopWired

With the spirit of the big baddy inside of him turning him into the nighttime vigilante known as Moon Knight, Marc is now ready to get busy as Disney's official description describes "The multiple identities who live inside him find themselves thrust into a deadly war of the gods against the backdrop of modern and ancient Egypt."
TV SERIES・2 DAYS AGO

Well, this is a superhero multiverse we didn’t quite expect. After reprising his role as the Green Goblin in “Spider-Man: No Way Home,” Willem Dafoe has his sights set on another comic book baddie: Batman’s nemesis, the Joker… or an “imposter” take on him. During a cover story interview with British GQ, Dafoe hinted at expanding his role in DC and Marvel films by way of a “Joker” sequel. “There is something interesting about, like, if there was a Joker imposter,” Dafoe explained. “So it would be possible to have not dueling Jokers, but someone that [claims] to be the Joker that...
MOVIES・2 DAYS AGO
CNET

Last year closed out with two series-capping blockbusters in two of the most iconic franchises of all time: The current era of the James Bond films came to an end with No Time to Die, and Marvel's comic hero served up a billion-dollar hit with Spider-Man: No Way Home. Spider-star Tom Holland wanted to swing from one to the other, pitching himself as a young James Bond -- but when that didn't work, the idea planted the seed for an Uncharted movie.
VIDEO GAMES・14 DAYS AGO
Deadline

Martin Kove is staying one step ahead of the competition. The “Cobra Kai” star is set to launch the podcast “Cobra Koves” with LiveOne-owned PodcastOne on January 20, as announced by Deadline. Kove originally starred in the “Karate Kid” films as bully John Kreese; in the Netflix spinoff series “Cobra Kai,” Kove’s character has since become a rival Sensei to lead stars Daniel LaRusso (Ralph Macchio) and Johnny Lawrence (William Zabka). Kove will break down his character in the “Cobra Koves” podcast, alongside his children, fraternal twins Jesse and Rachel, as they recap the Netflix series, which premiered its fourth season in...
TV SERIES・2 DAYS AGO
The Hollywood Reporter

Parasite Oscar winner Bong Joon Ho has found his next film. The filmmaker will write and direct an untitled sci-fi movie for Warner Bros., with actor Robert Pattinson in talks to star, The Hollywood Reporter has confirmed. The project will be based on Mickey7, a forthcoming novel from author Edward Ashton. Mickey7 is described as Andy Wier’s The Martian meets Blake Crouch’s Dark Matter. It centers on Mickey7, a man on an expedition to colonize the ice world Niflheim. This expendable employee takes jobs too risky for anyone else, and when he dies, he regenerates as a clone with most of his memories...
MOVIES・1 DAY AGO
Deadline

While Christmas has come and gone, Legendary and Warner Bros are looking to give a belated gift to us all, as sources tell Deadline the two companies have closed a deal for Peter Billingsley to star in A Christmas Story Christmas, a sequel to the holiday classic A Christmas Story, which will premiere on HBO Max. While not confirmed, sources add that Airplane star Julie Hagerty will play Billingsley’s mother. The script was written by Nick Schenk, who will also executive produce, and Clay Kaytis will direct. Billingsley will also produce along with his partner Vince Vaughn through their Wild West Picture Show...
MOVIES・11 HOURS AGO
COMICBOOKMOVIE.com

Tom Holland might be best known for playing Spider-Man at this stage in his career, but it's not hard to imagine him making a great James Bond down the line. However, it was the actor's suggestion that he could star in a "young James Bond" project that led to Uncharted becoming a reality.
MOVIES・14 DAYS AGO
Deadline

EXCLUSIVE: Alice Eve (Star Trek Into Darkness) and Marton Csokas (The Last Duel) are joining John Cena, Alison Brie and Juan Pablo Raba in director Pierre Morel’s (Taken) action-comedy Freelance. As we revealed this week, the film is now underway in Colombia. The movie follows a special forces operator (Cena) who decides to retire from the Army and start a family back in the U.S. After several years of mortgage payments, school drop-offs, backyard barbecues and trying to conform to life in suburbia, he decides to come out of retirement to take a gig providing security for a female journalist (Brie) as...
MOVIES・18 HOURS AGO