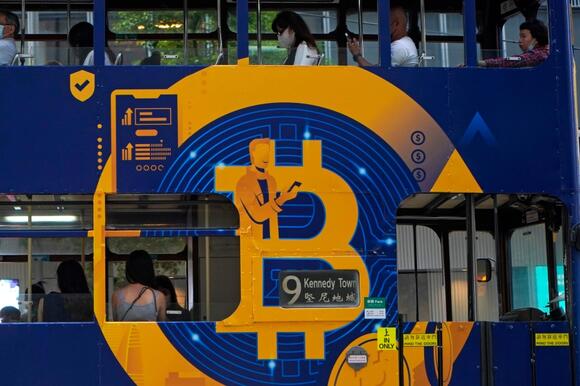 NEW YORK (AP) — Bitcoin stormed above $66,000 for the first time on Wednesday, riding a wave of excitement about how the financial establishment is increasingly accepting the digital currency’s rise.

The surge has come as more businesses, professional investors, and even the government of El Salvador buy into Bitcoin, further broadening its base beyond its initial core of fanatics.

The latest converts came into the world of crypto on Tuesday, when the first exchange-traded fund linked to Bitcoin found huge interest from investors. Shares of the ProShares Bitcoin Strategy ETF changed hands 24.1 million times in a resounding debut. It was even busier on Wednesday, with trading volume topping 29.4 million.

The ETF doesn’t invest directly in Bitcoin. It instead invests in the futures market tied to Bitcoin, but the industry sees the ETF bringing in a new class of investors. Someone with an old-school brokerage account can buy the ETF, for example, without having to open a trading account for crypto.

Investors are getting more interested in Bitcoin because they’re always looking for assets whose prices move independently of everything else in their portfolios. One school of thought says Bitcoin can offer investors protection from high inflation, and some fans see it as akin to “digital gold,” though it doesn’t have a long track record to back that up.

More high-minded fans say digital assets are simply the future of finance, allowing transactions to sidestep middlemen and fees with a currency that’s not beholden to any government.

Cryptocurrencies are still very far from winning over everyone, though. Critics point to how they’re still not widely used as forms of payment. They also criticize how much energy is used by the cryptosystem, which can ultimately mean higher bills for home heating and other utilities amid a global crunch, as well as more climate-changing emissions. The biggest threat, meanwhile, is all the regulatory scrutiny shining on it.

China last month declared Bitcoin transactions illegal, for example. U.S. regulators haven’t gone that far, but the chair of the U.S. Securities and Exchange Commission has said the world of crypto doesn’t have enough protection for investors.

Cryptocurrencies are also notorious for their sharp swings in price. The last time Bitcoin set a record high, the price dropped by half in roughly three months.

A big reason for that volatility is how wide the range of possibilities is for Bitcoin’s future, said Gil Luria, technology strategist at D.A. Davidson.

On one end, Bitcoin could go to zero if it ends up being a fad or if another cryptocurrency supplants it. On the other, it could usurp the role of the U.S. dollar and other currencies and become “all of money.” More people take a position in the middle, believing that Bitcoin can be useful and has some value.

Luria said he sees only a 1% probability of the “all of money” scenario happening, but that’s a better chance than he saw five years ago.

“To become all of money, you have to get a lot of people on board,” he said. And the last year has seen many new people come into Bitcoin as it’s hit records and become more mainstream.

“The higher Bitcoin goes,” he said, “it becomes a self-fulfilling prophecy.”

One under-the-radar altcoin is surging after a surprise listing by top US crypto exchange Coinbase. In a new blog post, Coinbase says that the Biconomy (BICO) token will start trading on Coinbase Pro later today once appropriate liquidity conditions are met. BICO is an Ethereum-based altcoin that powers Biconomy, a...
MARKETS・23 HOURS AGO
The Motley Fool

If you invested $2 in SHIB to begin the year, you're now a millionaire. In spite of its popularity, Shiba Inu lacks real-world utility and competitive advantages. However, this crypto trio offers a competitive edge and real-world use case. If you think the stock market's historic bounce from the coronavirus...
MARKETS・1 DAY AGO
Seeking Alpha

BTC has consolidated nicely after its most recent record run. Cryptocurrencies have been hot in the past few months to say the least, with many of them doubling in that time frame, or better. The mothership, Bitcoin (BTC-USD), has been a relative underperformer given the money that has flowed to smaller coins, but I see the current setup as quite bullish, and I continue to think we’re going to see new highs in the relatively near future. Below, we’ll take a look at why I like the chart for a continued rally, and why the regulatory environment continues to improve for the world’s largest anti-fiat.
MARKETS・18 HOURS AGO
The Motley Fool

These high-flying digital currencies are poised to plummet.
MARKETS・8 HOURS AGO

A popular crypto strategist and trader is expecting Bitcoin (BTC), Ethereum (ETH) and one altcoin to shake off the recent market-wide dip and launch to epic heights. The pseudonymous crypto analyst Kaleo tells his 449,800 Twitter followers that BTC’s price action in recent months mirrors 2020, where an accumulation phase was followed by “rapid price appreciation to new all-time highs.”
MARKETS・1 DAY AGO
dailyhodl.com

A Bitcoin (BTC) whale moved more than $875.7 million worth of Bitcoin in a single transaction as BTC’s price continued to move sideways on Tuesday. The blockchain tracker Whale Alert first reported a transaction between two unknown wallets on Tuesday morning. A separate unknown wallet also received less than 0.002 BTC from the sending wallet.
MARKETS・1 DAY AGO
CoinTelegraph

There has been no shortage of people and institutions that woefully underestimated the potential of cryptocurrency. Among the ranks of once-were Bitcoin naysayers is Wired, which destroyed the private key to a Bitcoin (BTC) wallet holding 13.34623579 BTC back in 2013 in order to make the point the cryptocurrency was nothing more than an “abstraction.” The Bitcoin in the inaccessible address is now worth $761,000.
MARKETS・14 HOURS AGO
Benzinga

Bitcoin Stays Below $60K, Ethereum Marks Key Milestone, Dogecoin and Shiba Inu Trade In The Red As Analysts Warn Crypto Market Not Yet Out Of Woods

Bitcoin (CRYPTO: BTC) traded below the psychologically important $60,000 level on Wednesday night as the global cryptocurrency market capitalization decreased 0.75% at $2.62 trillion. What Happened: The apex coin traded 0.53% lower over 24 hours at $57,113.46. For the week, BTC fell 0.98%. The second-largest coin by market cap, Ethereum...
STOCKS・17 HOURS AGO

Why Silvergate Capital Stock Popped, Then Dropped on Wednesday

The financial institution is partnering with one of the world's leading cryptocurrency exchanges.
STOCKS・22 HOURS AGO
The Motley Fool

4 Unstoppable Cryptos That Have Left Solana in the Dust

Solana has outperformed most other cryptocurrencies this year -- but not all of them. Only a few cryptocurrencies have outperformed Solana so far this year, which is not surprising given that Solana is up 11,700% since Jan. 1. Right now, metaverse tokens like Axie Infinity and Sandbox are producing higher...
MARKETS・2 DAYS AGO
GOBankingRates

Bitcoin Bitcoin was the first cryptocurrency and it remains both the largest and the most well-known. In fact, to the general public, Bitcoin is the standard bearer for all...
MARKETS・6 HOURS AGO
MarketWatch

The largest cryptocurrencies were mixed during morning trading on Thursday, with Cardano (ADAUSD) seeing the biggest move, rallying 9.65% to $1.70. Polkadot (DOTUSD) led the decreases with a 0.90% drop to $36.41.
STOCKS・4 HOURS AGO
The Motley Fool

What Does Bitcoin Mean for PayPal Stock?

The growing interest in Bitcoin could be an important catalyst in 2022 and beyond.
MARKETS・5 HOURS AGO
The Motley Fool

Ethereum is getting faster.
MARKETS・8 HOURS AGO
The Independent

The price of bitcoin has settled at around $57,000 on Thursday after yo-yoing between $59,000 and $53,000 throughout the week.BTC remains in limbo following last week’s flash crash, which some analysts mistook for the start of a bear market that would see its price continue to tumble in the short term. The cryptocurrency’s subsequent rebound gave bullish investors hope that new all-time highs were imminent but the market has now lost momentum in either direction.Other cryptocurrencies, including Ethereum (ETH), Cardano (ADA) and Solana (SOL) have all surged over the last 24 hours, with the latter rising by nearly 10 per...
STOCKS・6 HOURS AGO
The Motley Fool

Buy This Instead of a Bitcoin ETF

Investors first need to realize exactly what they own when speculating with any investment.
MARKETS・1 DAY AGO
GOBankingRates

What Is Crypto Banking?

You can get started with crypto banking by opening a crypto interest or checking account or using a DeFi app. Learn about options and risks to consider first.
MARKETS・1 DAY AGO
The Motley Fool

We all go through slumps. Unfortunately for crypto investors, so do these three cryptocurrencies.
MARKETS・1 HOUR AGO
The Motley Fool

If you don't want to buy and hold Bitcoin directly, these three mining stocks could be good options instead.
STOCKS・6 HOURS AGO
The Motley Fool

This is further evidence that cryptocurrency is joining the mainstream, but it requires context.
MARKETS・1 DAY AGO