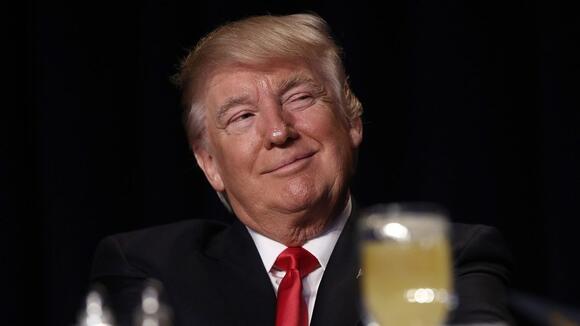 U.S. markets closed mixed on Wednesday, with the Dow Jones industrials and the S&P 500 up moderately and the Nasdaq down slightly. In Thursday's futures trading, all three are down fractionally. Crude oil traded down by less than 1%, and 10-year Treasury yields were essentially flat at 1.67%.

Bitcoin was Wednesday's driver. The cryptocurrency posted a new all-time high but pulled back by about 1.7% early Thursday. Bitcoin-mining firm Stronghold Digital Mining Inc. (NASDAQ: SDIG) came public at $19 and closed up 52% at $28.90. Shares traded down more than 3% in the premarket.

Among Thursday's early movers was Digital World Acquisition Corp. (NASDAQ: DWAC), a SPAC that former President Donald Trump has announced would merge with his nascent social media company, Trump Media and Technology Group. According to a joint press release, the planned transaction values the company at $825 million and includes a potential earn-out provision that could double the valuation. Digital World's stock traded up almost 15% in Thursday's premarket, while the publicly traded warrants traded up more than 300%.

Now back to the meme stock news. Vinco Ventures Inc. ( NASDAQ: BBIG ) was Wednesday's big loser on our watch list. The stock closed down about 18% and slipped another 1.7% in Thursday's premarket. Wednesday's morning announcement that the company had named a new president and would change its name to Zash apparently failed to impress investors. Trading volume of more than 84 million shares was about 50% higher than the daily average of 56 million.

Camber Energy Inc. ( NYSEAMERICAN: CEI ) added 7.1% to its share price on Wednesday to close at $1.82. More than 6% of that gain has been lost before regular trading opened on Thursday, and shares traded at $1.71. The company had no specific news and did not file more reports with the Securities and Exchange Commission.

ContextLogic Inc. ( NASDAQ: WISH ) jumped by 14.5% on Wednesday and was up by less than 1% in Thursday's premarket. The stock is still one of the most discussed on social media, with positive sentiment running high. As we noted in our midday report Wednesday , the company had no specific news except to announce the date of its quarterly earnings report.

Tesla Inc. ( NASDAQ: TSLA ) was the most talked-about stock on social media Thursday morning. While not strictly a meme stock, this one is hard to avoid because CEO Elon Musk's tweets draw a lot of comments. The company reported quarterly results after markets closed Wednesday that beat Street estimates on both profits and revenue. In its outlook statement, Tesla said it expects 50% manufacturing growth over a "multiyear horizon" and that the rate of growth depends on "our equipment capacity, operational efficiency and the capacity and stability of the supply chain."

Analysts have been boosting their price targets on Tesla stock, with Wedbush lifting its 12-month target from $1,000 to $1,100 per share to go with the firm's Outperform rating. FactSet already counts eight targets above $1,000. Wedbush's long-term bull case calls for a share price of $1,500.

After a tumultuous 2020, the year 2021 has been more or less straight up for the market as a whole. Barring a few selloffs throughout the year, none of which reached the double-digit percentage level, the S&P 500 has had smooth sailing. ...
STOCKS・20 HOURS AGO
CNBC

Bull market has legs into year-end and beyond, strategist says. Her top picks for 2022

Stocks still have a chance of rallying into year-end, says strategist Mona Mahajan. The major averages ended the week in the red Friday, weighed down by omicron fears, a weaker-than-expected November jobs report and concerns around the Federal Reserve's response to inflation. However, the downside scenarios for the market's two...
STOCKS・21 HOURS AGO
pulse2.com

It's the premier "picks-and-shovels" supplier for the technologies shaping our future.
STOCKS・1 DAY AGO

These digital assets are often compared to gold and silver.
STOCKS・8 HOURS AGO
24/7 Wall St.

A decade from now, these early players could be established names in the electric vehicle space.
ECONOMY・7 HOURS AGO
The Motley Fool

The gene-editing specialist's share price is now down roughly 54% in 2021.
STOCKS・20 HOURS AGO

Will Shopify Be a Trillion-Dollar Stock by 2040?

Will e-commerce continue to be an important channel for business?
ECONOMY・8 HOURS AGO
Motley Fool

Shiba Inu made investors millionaires in 2021 from mere pocket change. However, major hurdles are likely to prevent additional upside in the world's hottest cryptocurrency. You’re reading a free article with opinions that may differ from The Motley Fool’s Premium Investing Services. Become a Motley Fool member today to get instant access to our top analyst recommendations, in-depth research, investing resources, and more. Learn More.
STOCKS・3 DAYS AGO
The Motley Fool

The short answer is yes. But it could take a lot longer than you might like.
BUSINESS・9 HOURS AGO
The Motley Fool

These income stocks, with yields ranging from 8.4% to 9.3%, are screaming buys.
STOCKS・9 HOURS AGO

3 Stocks I'm Buying for Retirement if the Market Crashes

Some people think a market crash is just around the corner; these three stocks are worth scooping up if that occurs.
STOCKS・1 DAY AGO
24/7 Wall St.

A couple of SEC investigations have cooled off share prices for some popular meme stocks.
STOCKS・2 HOURS AGO
24/7 Wall St.

A top Wall Street strategist makes the case for quality small-cap stocks for 2022. These five Buy-rated stocks come with solid and reliable dividends, and they look like great ideas now for wary investors.
STOCKS・8 HOURS AGO
The Motley Fool

This Crypto Will Be the Moderna of 2022

Like Moderna, it's young and dynamic.
MARKETS・1 DAY AGO
The Motley Fool

These companies should deliver above-average dividend growth in the coming years.
STOCKS・1 DAY AGO