Every Afghan citizen has right to a passport, says Taliban official 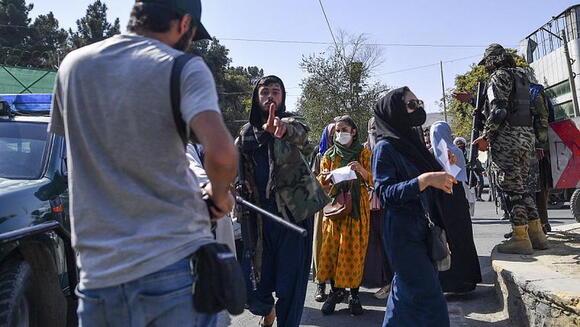 A senior Taliban official has said that each Afghan citizen is entitled to a passport .

Alam Gul Haqqani, the acting head of Afghanistan’s passport office, said the Taliban would issue passports to everyone who applied but it would prioritise those seeking medical treatment outside the country, sportspersons and students wanting to study abroad.

On 5 October, Mr Haqqani had said that between 5,000 to 6,000 passports would be issued each day as Afghanistan got ready to issue the documents after many months of delays. These delays hindered many who wanted to go abroad, including those trying flee Taliban rule after the militant organisation seized control of Afghanistan in August.

So far, the Taliban has issued around 46,000 airports, Mr Haqqani told BBC News in a recent interview.

When asked about the backlog and reports that hundreds of people with documents had queued up outside the passport office in Kabul , the Taliban official said: “The crowd was in the first two to three days. Since then, we have put the system in place. We are very organised and people come to our office and it’s not crowded anymore.

“Hopefully in the next 20 days, the whole issue of people waiting will be solved and we will issue passports,” he said.

The official added that “every citizen of this country” has the right to apply for a passport. “We will issue passports to everybody who wants to go abroad.”

But, he added that the Taliban was working hard to provide jobs to the people of Afghanistan “so they don’t need to leave” the country. “We do not trap anyone. We do not stop anyone from leaving,” Mr Haqqani added.

Mr Haqqani emphasised that Afghans shouldn’t be scared and said: “People from the previous government are welcome to apply for passports.

“No male employee has the right to perform a biometric [check] or other passport work on a woman,” Mr Haqqani had said on 5 October. The passport office had employed women to perform checks on women applicants.

As of early October, around 25,000 applicants had reached the final stage in the process of getting their passports, while roughly 100,000 applications were in the earlier stages, according to Qari Sayeed Khosti, the interior ministry spokesperson.

Passport to strap a bomb on your body and blow yourself up. Enjoy your kids before they grow up, or if they are the Taliban BEFORE THEY BLOW UP.

ISLAMABAD, Dec 3 (Reuters) - Afghanistan's Taliban government on Friday released a decree on women's rights which said women should not be considered "property" and must consent to marriage but failed to mention female access to education or work outside the home. The Taliban has been under pressure from the...
RELATIONSHIP ADVICE・23 HOURS AGO
San Diego Union-Tribune

A female judge was hiding from the newly empowered Taliban in Afghanistan when an apparent reading mistake 7,000 miles away changed her life
POLITICS・3 HOURS AGO
Idaho8.com

Taliban decree on women’s rights, which made no mention of school or work, dismissed by Afghan women and experts

The Taliban released a so-called “decree on women’s rights” on Friday that failed to mention access to education or work and was immediately panned by Afghan women and experts, who said it was proof that the militant group was uninterested in upholding basic freedoms for millions of Afghan women who have largely been constrained to their homes in recent months.
MIDDLE EAST・12 HOURS AGO
ABC 10 News KGTV

One man from Afghanistan did the unthinkable to bring his family back to San Diego all while thousands are still overseas trying to seek refuge in the United States.
SAN DIEGO, CA・1 HOUR AGO

It’s Time to Engage With the Taliban. Afghan Lives Depend on It.

Afghanistan is facing what the United Nations warns could be the “worst humanitarian disaster we’ve ever seen.” The catastrophe is “man-made,” according to the International Committee of the Red Cross, and “the international community is turning its back.” An estimated 1 million Afghan children are at risk of dying from malnutrition by the end of this year unless they receive immediate treatment.
CONGRESS・1 DAY AGO
San Diego Union-Tribune

A senior international aid official says Afghanistan is being hit by multiple crises that are "progressively getting worse," with drought, economic collapse and displacement all pushing the population into catastrophic hunger
ADVOCACY・1 DAY AGO
buffalonynews.net

New York [US], December 1 (ANI): Taliban forces in Afghanistan have executed or forcibly disappeared more than 100 former police and intelligence officers in just four provinces since taking over the country on August 15 despite a proclaimed amnesty, a US-based rights group has said. The Human Rights Watch (HRW)...
PUBLIC SAFETY・2 DAYS AGO
goodmorningpost.com

Taliban demands that Afghan reserves be unfrozen at Doha negotiations.

The Taliban delegation urged that the US administration unfreeze Kabul’s financial assets during discussions in Doha, Qatar, allowing it to function as a government in the midst of a grave economic crisis. An Afghan Taliban group led by Foreign Minister Amir Khan Muttaqi met with a US mission led by...
U.S. POLITICS・2 DAYS AGO

Kabul [Afghanistan], November 29 (ANI): Taliban have taken over the Afghan Independent Bar Association (AIBA) and plans on using it as a government office under the Ministry of Justice, claimed AIBA members on Sunday. This comes as a great number of Afghan prosecutors and advocates--many of whom were women--left the...
WORLD・4 DAYS AGO
albuquerqueexpress.com

Kabul [Afghanistan], November 27 (ANI): Afghan journalists and activists have expressed concerns over a new "religious guideline" issued by the Taliban, saying the move is "yet another form of control over women."Almost 100 days into its regime, the Taliban has asked female journalists to follow a dress code and called on TV stations to stop showing soap operas featuring women, sparking fears over women's rights and media freedom, Al Jazeera reported.
EDUCATION・6 DAYS AGO
Kait 8

STARK COUNTY, Ohio (WOIO) - Ever since the Taliban took over Afghanistan, hundreds of thousands of people have tried desperately to escape the repressive regime. “You’ve seen the images,” said Ohio Veteran, Matt Carpenter. “You saw people falling from planes. They were willing to do that to try to get out of that place so that alone should show you the level of desperation that we’re facing.”
OHIO STATE・7 DAYS AGO
Telegraph

Women have been banned from television dramas and female news readers told they must wear headscarves, under new Taliban guidance to counter immorality on Afghanistan's airwaves. The eight-point guidelines also dictate that films deemed to breach Islamic law or Afghan principles must be banned. Comedy and entertainment shows that insult...
TV & VIDEOS・11 DAYS AGO
buffalonynews.net

New York [US], November 23 (ANI): The Human Rights Watch (HRW) on Monday (local time) raised concerns regarding the imposition of strict new media guidelines in Afghanistan by the Taliban that especially harm women. The HRW in a statement said Taliban intelligence officials have issued death threats against journalists who...
AFGHANISTAN・11 DAYS AGO
jhu.edu

How Will We Protect Afghans’ Health Under the Taliban?

After the Taliban was forced from power in 2001, Afghanistan saw an infusion of funding and support that led to dramatic progress in nutrition, maternal mortality rates, and other health indicators. With the Taliban’s return to power, international aid has dried up, and the country’s health care system has virtually collapsed.
PUBLIC HEALTH・11 DAYS AGO
The Independent

Malala Yousafzai has said the rescue of women’s rights activists and others from Taliban-seized Afghanistan has ushered in “hope and safety” to vulnerable Afghans.The Nobel Peace Prize laureate’s comments come as it emerged an ex-Afghan minister, as well a lawyer who prosecuted more than 2,000 Taliban inmates, were among Afghans to arrive in Greece on Monday.A private charter flight transported the group of 119 Afghans from the capital of Kabul – with campaigners who worked with Yousafzai among the refugees.Yousafzai, a Pakistani activist who campaigns for women’s education, said: “Today’s arrival provides hope and safety for so many incredible, vulnerable...
WORLD・11 DAYS AGO
albuquerqueexpress.com

Kabul [Afghanistan], November 22 (ANI): Highlighting the humanitarian situation in Afghanistan, acting Foreign Minister Amir Khan Muttaqi has called on the US to immediately release Afghanistan's central bank assets. Muttaqi made these remarks during an interview where he said the US was no longer engaged in a war with Afghanistan...
POLITICS・12 DAYS AGO
AFP

Dead or alive? On the trail of the Taliban's supreme leader

When the Taliban overran Kabul in mid-August, seizing power for the second time, the years-old mystery over the whereabouts of the movement's Supreme Leader Hibatullah Akhundzada deepened further. Whether the elderly cleric is alive or dead is something many Afghans are uncertain about, and even the most dedicated analysts have doubts about who is really leading the group. AFP went on the trail of the elusive leader, and the findings are inconclusive. On October 30 -- two months after a Taliban spokesman insisted Akhundzada was alive and well in Kandahar -- rumours swirled in the southern city that the "emir" had delivered a speech at a Koranic school, or madrassa.
WORLD・1 DAY AGO
The Independent

If Britain is failing refugees it has promised asylum, can we blame people for crossing the Channel?

One of the more questionable claims the government makes about its refugee policy is that there are lawful routes for people to flee persecution and war. Thus, so the argument goes, there is no need for anyone to turn to people smugglers and make a dangerous crossing of the English Channel in order to exercise the right to claim asylum. Common sense suggests that no one would willingly put their lives or those of their families at risk if there was a simple matter of submitting a form to British officials, complete with the necessary evidence.
IMMIGRATION・1 DAY AGO
AFP