CalMatters is a nonpartisan, nonprofit journalism venture committed to explaining how California’s state Capitol works and why it matters. 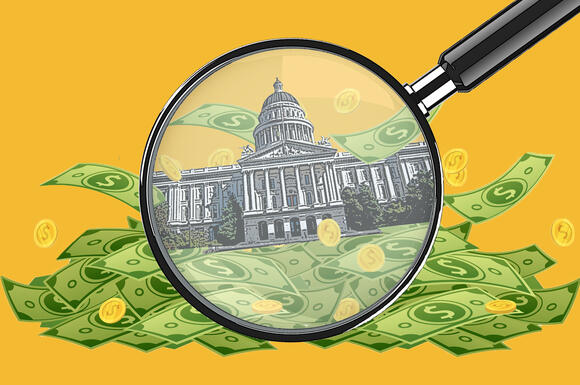 After more than 18 months of deliberation, California’s political ethics regulators voted today to approve new rules when elected officials raise money for charities that they or their family control.

More public disclosure of their ties to the group getting the payments? Yes.

Limits on money from interest groups that lobby the officials? Not at all.

The new rules fall far short of what government watchdogs say is necessary to rein in the growing trend of charitable donations serving as a conduit for interest groups that seek to influence politicians. Stronger rules would need legislative approval, and lawmakers made clear they’re not interested.

The new rules on so-called “behested payments” were crafted by the Fair Political Practices Commission following a CalMatters investigation that showed how politicians increasingly use charitable organizations to raise and spend money outside the limits of the state’s strict campaign finance laws.

The CalMatters report revealed that a dozen nonprofits run by state lawmakers and their staffs reported raising nearly $3 million in 2019 from interest groups that lobby the Legislature; that a nonprofit tied to the Legislature’s technology caucus was keeping its donations secret ; and that a lawmaker — now Attorney General Rob Bonta — routinely asked interest groups to donate to his personal foundation as well as to nonprofits that employed his wife Mia Bonta, who is now an assemblymember.

Specifically, one new rule requires officials to report their ties to a nonprofit organization when they ask donors to give money to a group that employs, or is controlled by, the official, their staff or their family members.

“These are relationships with a potential for influence or self-dealing that the public would want to have disclosed,” says a staff report to the commission .

While the rules will give the public more information about some transactions that could influence politicians, they do not constitute the kind of sweeping reform that government watchdogs say is necessary.

“Increased disclosure is great but it’s only a first step to solving a larger problem,” said Jonathan Mehta Stein, executive director of California Common Cause.

“It seems like a no-brainer that really egregious instances of behested payments, like the ones being targeted by these regulations, ought to be prohibited.”

But that would have to be done by the Legislature, not the FPPC. The commission can change rules about how to apply California’s political ethics law, but it doesn’t have the power to change the law itself. And legislators who have that power are unlikely to change a law that serves their interests. They made that clear to the commission.

“The current statutes and regulations regarding behested payments work well and are not in need of major adjustments,” Lance Olson, an attorney representing the state Senate and Assembly, wrote in a letter to the FPPC when it began reviewing potential changes last year.

He concluded the letter by reminding the commission that its power is limited to adopting rules “interpreting the requirements of law.” Overhauling the law that allows politicians to solicit unlimited donations to charity, he wrote, “remains the role of the Legislature and Governor.”

Yet even within the rules it has the power to craft, the commission chose to limit the scope of disclosure for decisions that officials make that impact donors: It would not be required for general legislation that doesn’t impact a specific group. Disclosure would be required for bills that more narrowly affect a person or industry. However, even then, due to limits in state law, the requirement would not apply to bills concerning public employee unions.

Altogether, it means that even if the new rules had been in place earlier this year when lawmakers voted to give prison guards a $5,000 bonus and an 8% raise within months of the guards’ union donating $75,000 to nonprofits run by the Legislature’s Black and Latino caucuses, lawmakers would not have had to disclose that link.

Miadich, the commission chairperson, has said general legislation should be left out of the rule because of its broad reach. He wants the rule to help shine light on more specific decisions, such as a city council’s approval of a permit for a developer who donates to a charity at a council member’s request.

But a Los Angeles activist who monitors development deals in that city said the new disclosure rules “would make no difference whatsoever.” Kim Cooper said the ties between former city council member Jose Huizar, a nonprofit focused on refurbishing a historic park in his district and a developer who wanted to restore the park were well known before Huizar was indicted last year on charges of taking bribes from developers.

“It wasn’t a secret,” Cooper said.

The use of nonprofits in some political operations is “a big problem,” she added. “And it’s not going to be solved by making little nibbling changes to how it is disclosed.”

Commissioner Catharine Baker said the new rules set the stage for further action in the future by creating more data about the connections between donors, charities and politicians.

“This may not be the last we do,” she said. “Once we see how this reporting plays out, we may want to revisit this in a year.”

The FPPC drafted the proposed new rules before completing its investigation of Assemblyman Evan Low , launched after CalMatters reported that the Democrat from Silicon Valley had stopped reporting donations to the nonprofit affiliated with the Legislature’s technology caucus, which he leads.

The investigation remains ongoing more than a year and a half after it was launched, said FPPC spokesman Jay Wierenga. And, he noted, the commission doesn’t get any details on the investigation until it’s over.

“Investigations can take a variety of times to complete in order to be both timely and thorough. Both are equally important. There are a myriad of factors that go into any situation, such as availability of documents, witnesses, cooperation, conflicting testimony, and more,” Wierenga wrote in an email.

“There isn’t a game clock on it, the time needed is what’s necessary to get to completion.”

Just two days into COP26, the state sold its first ever climate-certified bond for more than $465 million.
CALIFORNIA STATE・12 HOURS AGO
CalMatters

How should California spend its big budget surplus?

California's treasury is awash in money, even as the state's overall economy is sluggish, and the debate is beginning over how to spend the huge surplus.
CALIFORNIA STATE・4 DAYS AGO
CalMatters

LA County’s board is too small for 10 million people

Reducing penalties without requiring accountability is not working for drug offenses or serious crimes.
SAN DIEGO COUNTY, CA・2 DAYS AGO

A 50% coupon for one tool? Gardeners call California’s subsidy inadequate

California will ban most new gas-powered lawn equipment starting in 2024, but landscapers and gardeners warn the transition will cost them money and jobs. Industry officials say the technology isn’t ready for commercial use and called a $30 million incentive program for small operators inadequate. One state lawmaker who co-authored the bill says he’s open to more funding.
CALIFORNIA STATE・2 DAYS AGO
CalMatters

The Building Standards Commission should require that all new multi-family housing with parking must include EV ready charging.
CALIFORNIA STATE・3 DAYS AGO
CalMatters

Billions in funding for wildfire should be just a down payment

California redistricting: Which incumbents are in tough spots?

The state's redistricting commission isn't supposed to consider where current elected officials live. And the preliminary maps put some House members and state legislators into less politically friendly districts, or in the same district as another incumbent.
CALIFORNIA STATE・8 DAYS AGO
CalMatters

How long will Newsom govern by decree?

For the second time, an independent commission is drawing new congressional and legislative districts for California and it's been a messy process.
CALIFORNIA STATE・11 DAYS AGO
CalMatters

I urge California officials to make it economically viable for commercial boat owners to go zero-emission.
BOATS & WATERCRAFTS・7 DAYS AGO

Employees should analyze the costs of Auto-IRA program

Employers and employees subject to other state mandated retirement programs should carefully assess the details and costs.
ECONOMY・8 DAYS AGO
CalMatters

More holistic approach needed to address backlog at our ports

California leaders need to implement these solutions to tackle short- and long-term issues at the state's ports.
ECONOMY・8 DAYS AGO
CalMatters

Outgunned: The story of a woman, an abuser, and California’s failing gun control

Outgunned: The story of a woman, an abuser, and California’s failing gun control By Robert Lewis November 17, 2021 Lea este artículo en español. Eighteen miles south of the Central Valley home that was her prison, down Highway 99 past almond orchards and trucks overloaded with hay bales, sits the Madera County Superior Court. The four-story […]
CALIFORNIA STATE・9 DAYS AGO

Gov. Newsom says the situation with homeless encampments is unacceptable. The state housing agency is funding more services, while Caltrans is clearing some camps. But advocates are wary.
CALIFORNIA STATE・10 DAYS AGO
CalMatters

Community colleges need the resources to provide the important rungs in the ladders to success for California students.
CALIFORNIA STATE・11 DAYS AGO
CalMatters

Studies show that transitioning to an electricity grid powered by 100% clean energy can lock in lower utility bills.
ENERGY INDUSTRY・10 DAYS AGO
CalMatters

Elaine Howle is stepping down at the end of 2021 after 21 years on the job. Her office has issued audits of a wide range of state agencies, including a series of highly critical reviews of California's pandemic response and spending. In an interview with CalMatters, she talks about her biggest accomplishments and stiffest challenges.
CALIFORNIA STATE・14 DAYS AGO

CalMatters is a nonpartisan, nonprofit journalism venture committed to explaining how California’s state Capitol works and why it matters.