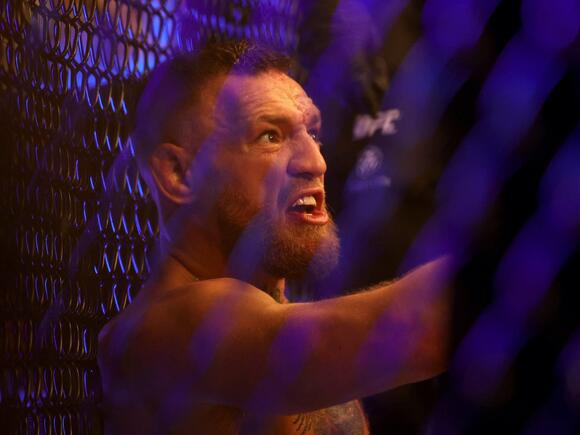 The former two-weight UFC champion McGregor was accused of assault last weekend by Italian DJ Francesco Facchinetti, who says that McGregor punched him at a late-night party during a family vacation in Rome, Italy.

"I took a punch for nothing," Facchinetti said, according to a rough translation of posts on his social media accounts..

"That punch could go to anyone. My friends, my wife, or other friends. That's why I decided to sue Conor McGregor because he is a violent and dangerous person."

Insider sought comment from a McGregor spokesperson regarding the allegation but never received a reply.

Speaking this week, Chimaev told Zuba TV, in quotes translated from Russian by Championat : "Do I like Conor exactly as an athlete? Yes, he achieved everything in the UFC - he was a champion in two weight classes. This I respect with him.

"But it is impossible to respect him as a person."

Chimaev is one of the most exciting combatants in mixed martial arts.

He stormed onto the scene in 2020 when he produced two perfect performances on "Fight Island" in Abu Dhabi last summer in a 10-day span - a UFC record.

Having displayed suppressive wrestling skills in the United Arab Emirates, Chimaev returned to the Octagon later in the year at the UFC's Las Vegas property Apex, and scored a 17-second, one-punch knockout .

The 27-year-old's ascent to the top of MMA was interrupted because of a particularly ghastly case of long COVID , with Chimaev coughing up blood, receiving treatment, and suffering so badly that he openly contemplated retirement from fighting .

A phone call from Chechen warlord Ramzan Kadryov seemingly forced Chimaev to change his mind and he refocused on competing professionally midway through 2021.

Months later Chimaev was seen on video sparring Kadryov , and it became clear the athlete could return to UFC by the end of the summer.

Chimaev, unbeaten in nine pro bouts, fights Jingliang Li - his first opponent since overcoming the coronavirus - at the UFC 267 event on October 30 at the Etihad Arena in Abu Dhabi.

It takes LeBron James 16 hours of work to afford a home. Conor McGregor can buy 1 in half the time

Some of the world’s top athletes move regularly in order to play for different teams, and they often don’t have a problem paying five (or more) figures on monthly rent while they search for a more permanent home. When superstar soccer player Lionel Messi recently switched teams from F.C. Barcelona...
NBA・15 DAYS AGO
ClutchPoints

2021 wasn’t the greatest year in terms of fighting for Conor McGregor, getting knocked out by Dustin Poirier in January then breaking his leg against his UFC rival in July. However, the Irishman is on the mend now and according to his coach, looking more jacked than ever. Via The...
UFC・7 DAYS AGO
The Independent

Khabib Nurmagomedov insists Justin Gaethje is the hardest puncher he has ever faced in the UFC.Having mixed it with Conor McGregor and Dustin Poirier, The Eagle then called it a day after his next fight, which saw him knock off Gaethje on Fight Island, concluding a glittering career with a 29-0 record.But the October 2020 meeting was memorable for the Russian, who maintains the American “hit like a truck”.“This guy [Justin Gaethje] hit like a truck, you know,” Nurmagomedov told Mike Tyson on his Hotboxin’ podcast.“Nobody hit me harder than Justin Gaethje. His kick, his punch, his left hook, right...
UFC・9 DAYS AGO
MMAWeekly.com

Nate Diaz will always be the guy that handed Conor McGregor his first UFC loss when they first fought at UFC 196 in March 2016. McGregor avenged the loss five months later at UFC 202, defeating Diaz by majority decision. While the two are even with a win over each other, Diaz finished McGregor and McGregor was unable to do that to The Ultimate Fighter season 5 winner.
UFC・2 DAYS AGO

Anthony Smith has had a strange beef with Conor McGregor. The former UFC champion has been firing shots at Smith for a long time. The UFC light heavyweight had trouble figuring out what the Irishman’s problem was. He now believes he has figured it out. Anthony Smith took to his...
UFC・14 DAYS AGO
firstsportz.com

“Conor McGregor, now his stock is going down,” Georges St Pierre advises McGregor to bring some changes in his lifestyle

Conor McGregor’s coach John Kavanagh has provided an update on his fighter’s return to the Octagon, following the former UFC champion’s leg break against Dustin Poirier.McGregor has lost twice to Poirier in 2021, knocked out by the American in the second round in January before suffering a broken leg at the end of the first round in July.The Irishman is expected back in the ring in the first half of 2022, and coach Kavanagh spoke to Submission Radio about his compatriot’s recovery and impending return.“He’s going to be back in the gym, he’s going to be back on the...
UFC・8 DAYS AGO
SPORTbible

Khabib Nurmagomedov and his team jokingly asked Herb Dean how much he was paid to allow Conor McGregor's cheating antics at UFC 229. Khabib defended his lightweight title by forcing bitter rival McGregor to tap out to a neck crack in the fourth round of the bout at the T-Mobile Arena in Las Vegas.
UFC・12 DAYS AGO

Conor McGregor will never be one of us again, and it ‘eats him alive’ claims UFC title challenger

Conor McGregor recently tweeted and deleted a video of him laughing at Belal Muhammad and Anthony Smith working the desk for UFC Vegas 42. McGregor’s giggles seemingly sprung from Muhammad mistakenly claiming that Max Holloway was the first man to defeat Jose Aldo in the UFC. That honour of course...
UFC・13 DAYS AGO
MMAmania.com

Conor McGregor has some explaining to do. The former UFC lightweight champion went to war with Khabib Nurmagomedov back in late 2018 and the nasty, pre-fight buildup was considered the “darkest” in the history of the promotion, with “Notorious” taking personal potshots at all things “Eagle.”. Including Dagestan. That didn’t...
UFC・9 DAYS AGO
The Independent

Michael Chandler has said he is not intimidated by Conor McGregor’s trash-talking abilities, as the American attempts to set up a fight with the Irishman in 2022.Chandler debuted in the UFC in January, on the undercard of McGregor’s second fight against Dustin Poirier.On that night, Chandler knocked out Dan Hooker in the first round, but he has since suffered back-to-back losses. In his second UFC fight, the 35-year-old almost stopped Charles Oliveira in the first round but was finished early in the second with the vacant lightweight title on the line. Then, in early November, Chandler lost to Justin...
UFC・1 DAY AGO
mmanews.com

Chael Sonnen doesn’t have a full understanding of his clash with Conor McGregor earlier this week, but he sounds certain it won’t change his protectiveness of the Irish lad in the future. In last weekend’s UFC Vegas 42 main event, Max Holloway defeated Yair Rodriguez in a battle for the...
UFC・14 DAYS AGO

Conor McGregor is the most talked-about man in combat sports and the discussion right now is ‘who will he fight’ when he returns. But McGregor has already answered that question for us. “Hi lads, here goes.. clicks and the like,” he wrote in response to an ESPN article asking who...
COMBAT SPORTS・10 DAYS AGO
The Independent

Conor McGregor no longer ‘one of us’ and ‘sold his soul for money’, UFC rival claims

UFC star Anthony Smith insists Conor McGregor is no longer a legitimate fighter anymore and not being “one of us” drives him “crazy”.The pair have exchanged trash talk in recent months, with McGregor unhappy at criticism after his UFC 264 loss to Dustin Poirier, which resulted in a broken tibia.The Irishman fired back, labelling the light heavyweight as a “big zombie”.While McGregor mocked Smith further during media work for UFC Vegas 42, saying in a since-deleted video: “What the f*** is this? Get this off my tele now.”And Smith, whose record stands at 36-16 after winning his last three fights,...
UFC・11 DAYS AGO
USA Today

'He’s not so much about warm-up fights': John Kavanagh says Conor McGregor very excited to attack 2022

John Kavanagh says Conor McGregor is not looking for a tune-up fight in his return. McGregor (22-6 MMA, 10-4 UFC), who broke his leg in a TKO doctor’s stoppage loss to Dustin Poirier at UFC 264 in July, is expected to return to the mats in the next couple of weeks according to his head coach.
UFC・8 DAYS AGO
fcfighter.com

Conor McGregor has called for a title shot next, and while it remains to be seen if that happens, his head coach is certain the star will face a top competitor. McGregor continues to recover from the broken leg he incurred during his rubber match with Dustin Poirier this past July. Due to the fighter’s fame and accomplishments, there’s been extensive speculation about who he’ll face next.
UFC・9 DAYS AGO
Bloody Elbow

Conor McGregor has ruffled a lot of feathers over the years. But the ones that usually got him in trouble were things he said that many would easily deem to be crossing the line. In 2018, “The Notorious” incited a personal rivalry with Khabib Nurmagomedov, whom at one point he...
UFC・8 DAYS AGO
The Independent

Many fighters mentally visualise key moments in their career, but it is rare for those moments to materialise just as conceived.Ian Garry had a clear design for his UFC debut, so specific that the room for error could have been excruciatingly claustrophobic.But the 24-year-old Irishman displayed precocious composure all throughout fight week this month – still just 23 at the time – both in his expert navigation of interviews and when he stepped foot in the Octagon for the first time. A wave of hype crested on 6 November at Madison Square Garden in New York City, as Garry’s...
UFC・6 DAYS AGO
Bloody Elbow

Michael Chandler: Only casuals and haters don’t respect Conor McGregor as a fighter

Say what you will about Conor McGregor’s behavior outside of the cage but inside the cage his skills speak for themselves. Those were the sentiments of No. 5-ranked UFC lightweight and former three-time Bellator lightweight champion Michael Chandler, who shut down McGregor’s most outspoken critics during a recent appearance on Bussin’ With The Boys (h/t Middle Easy).
UFC・6 DAYS AGO
The Independent

Conor McGregor has revealed he plans to be ready for a UFC return by April as he steps up his rehabilitation following a broken leg.The Irishman suffered the setback in defeat to Dustin Poirier at UFC 264.But despite the gruesome injury, McGregor is bullish about his return and insists he “cannot wait to wrap this steel bar in my leg across the neck of a future opponent”.McGregor added that “patience” is key to his return to the octagon, with two fights remaining on his contract.“The fibula is fully healed,” McGregor revealed on Twitter. “The medial side of the tibia is...
UFC・5 DAYS AGO