Elon Musk posts a raunchy tweet about bitcoin hitting $69,000 - and the crypto community loves it 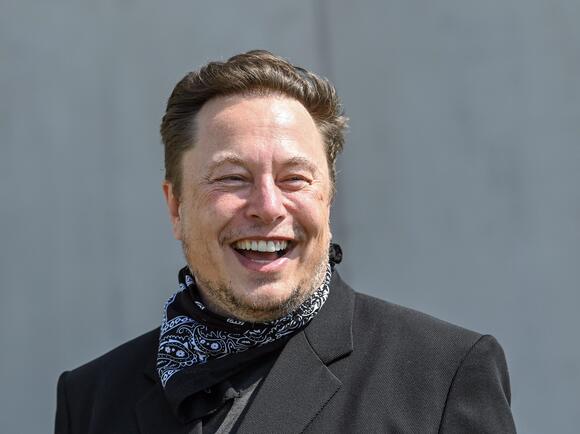 Tesla CEO and cryptocurrency champion Elon Musk on Thursday posted a raunchy tweet about bitcoin's record high of $69,000 the day before, prompting responses from thousands of users.

The cartoon featured a man and a woman in bed watching bitcoin stand at $69,000 on their TV, followed by a comparatively lackluster ether at $4,200.

His tweet might have been inspired by the fact that bitcoin rallied to a record of nearly $67,000 on Wednesday, following the successful launch of the ProShares' Bitcoin Strategy ETF, the first futures fund.

Following the launch of the ETF, many market experts believe bitcoin could climb to $80,000 in the near term and even up to $168,000 over the longer term.

The billionaire's tweets have in the past caused coins such as bitcoin, dogecoin and even shiba inu to rise in price, although his post on Wednesday didn't elicit much reaction in the market.

Tesla holds 42,902 bitcoins now worth almost $2.8 billion, according to Bitcoin Treasuries . However, the company reported it had a $51 million impairment on those holding in the third quarter.

Many brands are starting to see a recovery despite the challenges initially brought on by the pandemic. Some businesses, especially ones that focused efforts on expanding e-commerce ventures, have even seen profits rise even higher than before. HYPEBEAST has rounded up the top business and crypto stories of the week...
STOCKS・1 DAY AGO
techacrobat.com

NASA has released its DART mission towards the asteroid belt, and its social media team posted a caustic but logical tweet. Considering that we are talking about space, SpaceX founder Elon Musk could not confront a similar satirical complimentary tweet. NASA’s DART mission was released aboard the SpaceX Falcon 9 launch vehicle.
AEROSPACE & DEFENSE・22 HOURS AGO
Benzinga

The address holding about 28% of Dogecoin's (CRYPTO: DOGE) total supply most probably belongs to Robinhood, not Elon Musk as some previously speculated. What Happened: A recent investigation led by the Dogecoin community linked the wallet behind Robinhood's 420.69 DOGE wallet test transaction to the famous Dogecoin whale wallet currently holding 4.1 billion DOGE — equivalent to about $892 million — but previously held as much as 36.7 billion DOGE.
MARKETS・1 DAY AGO

How a Single Elon Musk Tweet can Change Cryptocurrency Prices

Friday's shortened trading session was dominated by the news of a new coronavirus variant and its impact on investors.
STOCKS・1 DAY AGO
Markets Insider

Elon Musk has accomplished many things, from co-founding Tesla to starting SpaceX. But there is also one feat the world's wealthiest person has mastered: tweeting. Here's a look back at a month of his tweets that either made headlines or moved markets. Sign up here for our daily newsletter, 10...
MARKETS・1 DAY AGO
The Independent

A cryptocurrency-trading hamster that made headlines in virtually all major mainstream media outlets and attracted the attention of none other than centibillionaire Elon Musk has died. After starting trading in June, the rodent became a celebrity in the investment world by September after managing to post higher returns than Warren...
PETS・3 DAYS AGO
New York Post

Tesla CEO Elon Musk disclosed Tuesday that he sold another 934,091 shares of the electric vehicle maker, worth some $1.05 billion, bringing his total selling spree this month to nearly $10 billion worth of Tesla stock. Musk — the wealthiest man in the world, worth some $300 billion — made...
STOCKS・4 DAYS AGO
Benzinga

Dogecoin Regains Key Trendline, Elon Musk Sticks Up For 'The Little Guy:' What's Next For The Crypto?

Tesla Inc. (NASDAQ: TSLA) CEO Elon Musk’s tweet on Monday that at least half of this tweets are composed on a “porcelain throne” has elicited a humorous response from noted astrophysicist Neil deGrasse Tyson. What Happened: Neil deGrasse Tyson, who is also a planetary scientist and author, took to Twitter...
ECONOMY・4 DAYS AGO

Elon Musk has now sold around 9.2 million shares in Tesla since asking his Twitter followers whether he should offload 10% of his holding in the EV company. That means the Tesla chief executive is now more than halfway towards the target, which he vowed to honor. Musk owned over...
STOCKS・4 DAYS AGO
Fortune

What to know about the JPMorgan and Elon Musk feud

Subscribe to Fortune Daily to get essential business stories straight to your inbox each morning. A 60-character tweet is at the center of the feud between Elon Musk and JPMorgan Chase that has burst into public view. “Am considering taking Tesla private at $420. Funding secured,” Musk wrote in a...
BUSINESS・4 DAYS AGO
Fortune

Elon Musk has been in hot water with the SEC over his Tesla tweets. Now Tesla has hired a new lawyer—from the SEC

Subscribe to Fortune Daily to get essential business stories straight to your inbox each morning. Elon Musk has taken on a new tactic to tackle his run-ins with the Securities and Exchange Commission (SEC): If you can’t beat ‘em, hire ‘em. Musk's EV company Tesla has hired David Misler, former...
BUSINESS・5 DAYS AGO
Markets Insider

Since his November 6 Twitter poll, Tesla CEO has sold 9.2 million shares worth $9.9 billion. Musk tweeted that he would sell 10% of his stock if users of the social media platform approved. A majority of his followers agreed with the sale. Tesla Inc Chief Executive Elon Musk sold...
STOCKS・4 DAYS AGO
Markets Insider

The rising costs of real estate and college education could be drawing younger people to crypto, as well as inflation that's spiked prices of everyday goods.
STOCKS・4 DAYS AGO
Markets Insider

Cathie Wood bought $130 million worth of Zoom stock on Tuesday, after the video conferencing firm fell almost 15% to a 17-month low. Two of Wood's ETFs, ARK Innovation and ARK Next Generation Internet, purchased nearly 650,000 shares in Zoom, which is down 39% this year and 23% this quarter.
STOCKS・4 DAYS AGO
decrypt.co

Tesla CEO Elon Musk and Binance CEO Changpeng Zhao (CZ) today got into a Twitter feud following issues surrounding Dogecoin withdrawals on the cryptocurrency exchange. According to Binance, issues encountered over Dogecoin withdrawals are down to a “technical issue” caused because the exchange has “a different technical wallet set-up for DOGE.”
STOCKS・5 DAYS AGO