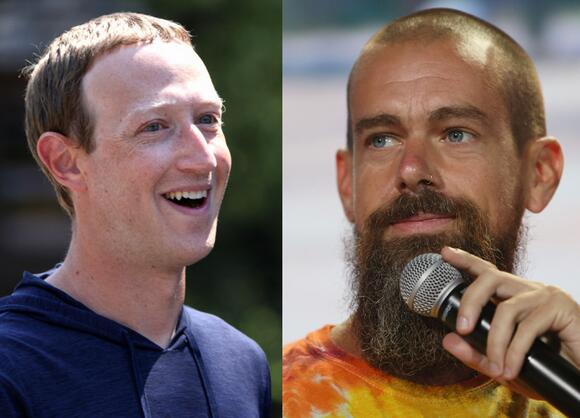 Amid a string of accusations and controversies following the publication of a whistleblower’s report, Mark Zuckerberg is attempting to rebrand Facebook with a new name but some of his tech contemporaries aren’t buying it.

Earlier this week, Zuckerberg announced that, as part of a new initiative, they would “effectively transition from people seeing us as primarily being a social media company to being a metaverse company.”

What that means remains to be seen but it has been reported that the company could be looking at producing augmented and virtual reality apps. However, the use of the word “metaverse” has raised some eyebrows, notably those of Twitter CEO Jack Dorsey.

Dorsey, who is no stranger to trolling Facebook, responded to a tweet that highlighted that the word “metaverse” was invented by author Neal Stephenson for his 1992 sci-fi novel Snow Crash – about a dense digital network that begins to bleed into reality.

The tweet said: “The word ‘metaverse’ was coined by Neal Stephenson in the book “Snow Crash” and it originally described a virtual world owned by corporations where end users were treated as citizens in a dystopian corporate dictatorship.

“What if Neal was right?”

Dorsey chimed in to respond to the question by saying: “Narrator: He was.”

Earlier this month, Dorsey joked about buying Facebook after the social media giant experienced a massive outage that also affected their sister apps Instagram and WhatsApp.

What Facebook’s new name will be remains to be seen but it’ll take a lot to fix some of the problems that it has been accused of. As congresswoman Alexandria Ocasio-Cortez sarcastically said in response to the planned name change: “That’ll fix it.”

An international coalition of over 300 scientists published an open letter to Mark Zuckerberg on Monday. They demanded access to Meta's research on how Facebook and Instagram affect child and teen mental health. Leaked internal research found that Instagram could cause body image issues among teen girls. An international coalition...
MENTAL HEALTH・14 HOURS AGO
Indy100

Piers Morgan ‘sold just 5,600 books’ despite having nearly 8m followers - and Twitter is having a field day

Piers Morgan’s book, Wake Up: Why the World Has Gone Nuts, sold a reported 5,650 print copies since it was published a year ago - despite him having close to 8m followers on Twitter. According to a report fromThe New York Times, it’s just one of many book sales figures...
BOOKS & LITERATURE・8 HOURS AGO
The Motley Fool

LONDON (AP) — Instagram on Tuesday launched a feature that urges teenagers to take breaks from the photo-sharing platform and announced other tools aimed at protecting young users from harmful content on the Facebook-owned service.
CELL PHONES・1 HOUR AGO

Instagram announced new protections on Tuesday for young users, a day before the photo-sharing app's CEO faces a grilling from US lawmakers on whether the platform is "toxic" for children. Mosseri, who appears before a Senate panel on Wednesday, defended the platform in his post, saying: "Every day I see the positive impact that Instagram has for young people everywhere."
CELL PHONES・6 HOURS AGO
BlogHer

How To Submit Your Facebook Business Page For Verification

In 2015, Facebook rolled out a way for local businesses to receive a grey checkmark on their Facebook Business Pages, confirming them as a verified small business. Hooray! Last year, Facebook removed all grey verification badges due to “user confusion” about their meaning—and hard-working entrepreneurs were bummed. Do not fear, my friends—we’ve got your back. If you lost your grey check, there is still a process for you to submit for a coveted blue verification badge. Thankfully, Facebook has implemented a process to receive a verification badge that anyone with a Facebook Business Page can navigate. Time to get a little...
SMALL BUSINESS・20 HOURS AGO
Cheddar News

Head of Instagram Adam Mosseri is slated to testify this week in front of the Senate Commerce Subcommittee after a Wall Street Journal report that found the Meta-owned social media platform is negatively impacting the mental wellness of teen girls.
U.S. POLITICS・1 DAY AGO
The Guardian

With major platforms struggling to make a profit, Dorsey is following the money. Cryptocurrency may be about to go mainstream, says author Richard Seymour
MARKETS・1 DAY AGO

Twitter made this shareholder-friendly move after Jack Dorsey resigned as CEO. Here’s why it just might work.

Firms typically see their stock do well when they appoint a CEO from inside the company.
MIAMI, FL・1 DAY AGO
Benzinga

Sq., the funds firm led by Twitter Inc co-founder Jack Dorsey, mentioned on Wednesday it was altering its title to Block Inc, because it seems to broaden past its cost enterprise and into new applied sciences like blockchain. The San Francisco-based firm mentioned the title Sq. had grow to be...
BUSINESS・5 DAYS AGO
etftrends.com

Twitter founder Jack Dorsey stepped down as CEO of the social messaging company on Monday, noting that the company is ready to move on without him. Dorsey, who also founded payments company Square, will be handing the reins of the company to Parag Agrawal, who has been serving as Twitter’s Chief Technology Officer (CTO) since 2017.
STOCKS・7 DAYS AGO

Twitter is going to change. Twitter's CEO, Jack Dorsey, announced that he is stepping back from Twitter.

Jack Dorsey announced yesterday on his Twitter that after 16 years, he has decided to leave the company. Jack Dorsey shared his journey and post on Twitter where he shared that he will be leaving Twitter and the new CEO will be Parag Agrawal.
7 DAYS AGO
Entrepreneur

On Monday, Twitter founder and CEO Jack Dorsey stepped down and appointed Parag Agrawal as his successor.
BUSINESS・7 DAYS AGO
TheWrap

What’s Next for Twitter After CEO Jack Dorsey’s Exit?

New leadership paves the way for new growth, from crypto to new subscription models, analysts say. Twitter may finally start evolving now that founder and CEO Jack Dorsey has stepped down after 16 years at the company. Besides Mark Zuckerberg, Dorsey was one of the few remaining as CEO of...
BUSINESS・7 DAYS AGO
theregister.com

Twitter CEO Jack Dorsey resigned on Monday, anointing CTO Parag Agrawal as the social network company's new chief executive and announcing the elevation of board member Bret Taylor, former CTO of Facebook, to Independent Chair of the Board. Dorsey, who remains CEO of payments biz Square, explained his decision to...
BUSINESS・8 DAYS AGO
techworm.net

Twitter’s Co-Founder and Chief Executive Officer Jack Dorsey has officially resigned from Twitter. Jack has been a part of Twitter for over 16 years now. According to reliable sources, CTO Parag Agrawal will take over his position after a unanimous decision between Twitter’s board and Dorsey regarding his successor. Lately, 45-year-old Jack has been showing great interest in cryptocurrencies.
BUSINESS・8 DAYS AGO
Alejandro Betancourt

Twitter's Jack Dorsey is being replaced as CEO by Parag Agrawal

Twitter, Inc. (NYSE: TWTR) today announced that Jack Dorsey has decided to step down as CEO and that the Board of Directors has unanimously elected Parag Agrawal as CEO and a member of the Board, effective immediately. Since 2017, Agrawal has served as Twitter's Chief Technology Officer. He has worked for the site for nearly a decade.
8 DAYS AGO
Phone Arena

Jack Dorsey, who co-founded the popular Twitter social media site back in 2006, is stepping down as CEO of the company effective immediately. Replacing Dorsey will be Twitter chief technology officer Parag Agrawal. In a statement, Dorsey said, "I've decided to leave Twitter because I believe the company is ready...
BUSINESS・8 DAYS AGO
Street.Com

Jack Dorsey has stepped down as CEO of Twitter (TWTR) - Get Twitter, Inc. Report. On Monday, the social media giant announced that Parag Agrawal is replacing Dorsey at the helm. "I've decided to leave Twitter because I believe the company is ready to move on from its founders. My...
BUSINESS・8 DAYS AGO