Why the FDA Isn't Thrilled About Moderna's COVID-19 Booster 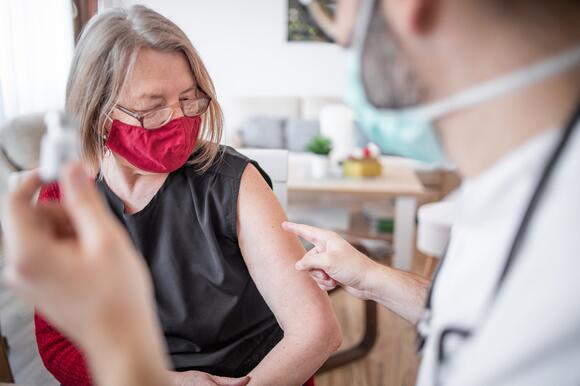 On Wednesday, the Food and Drug Administration granted Emergency Use Authorization for boosters of Moderna's (NASDAQ:MRNA) COVID-19 vaccine. This decision came despite the fact that briefing documents prepared by the FDA for an advisory committee's review of Moderna's booster data weren't overly enthusiastic. In this Motley Fool Live video recorded on Oct. 13, Motley Fool contributors Keith Speights and Brian Orelli discuss why the FDA isn't thrilled about Moderna's COVID-19 boosters.

Keith Speights: There's an FDA advisory committee that's going to be meeting this week to review Moderna's COVID-19 vaccine booster data. The FDA released its briefing documents in advance of that meeting on Tuesday, which is par for the course for the FDA, that's what they usually do. It appears that the FDA isn't necessarily all that thrilled about Moderna's booster.

Now, the briefing documents didn't come out against the booster, but it didn't seem that they were gung ho about it either, so what's the story here?

Brian Orelli: I don't think the issue is really about whether the booster actually works, clearly, it raises the antibody levels, which is what a booster is supposed to do. It's not about the safety either, it looks like it's about the safest as the second dose. The issue, I think, is mostly about whether it's needed.

Just because you have lower antibody levels six months after your second dose doesn't necessarily mean that you're not protected. There's obviously some level where that's true, but there's multiple factors that go into it. How much virus are you exposed to. If you're exposed to less virus, then you obviously need less antibody to counteract those viral particles that you get exposed to.

Then how good is your immune system to reacting to the virus. Beyond your antibodies, you have memory B cells and memory T cells, and those will take over eventually and take care of the virus assuming you've been vaccinated or to a lesser extent if you've been exposed previously to the COVID-19 virus. Then the lower level of antibody really doesn't tell you anything about the likelihood of severe disease. Just because you have lower levels and you might get infected and you might get cold-like symptoms doesn't necessarily mean that you're going to end up in the hospital, and that's really what we should be trying to prevent.

That's the FDA's argument. It's basically the same argument that they made for Pfizer (NYSE:PFE) and BioNTech's (NASDAQ:BNTX) booster. The Advisory Committee there came to the conclusion that it made sense to give the vaccine to the people who were at most risk, people who are highly likely to be exposed to somebody with COVID-19 or somebody who's less likely to get exposed to COVID-19, but if they did get exposed, would be more likely to end up in the hospital.

I think that's the right move and I think the committee ultimately, and the FDA will ultimately do the same thing here. It should be noted that the CDC's advisory committee that reviews approvals after the FDA approves a vaccine, the CDC's committee meets and makes recommendations on who the approved vaccine should actually be used for. They're advising doctors here. That meeting has already been scheduled for Moderna's booster. Clearly, the CDC is assuming it'll get approved by the FDA.

Wow, I am guessing the Google, Facebook, and YouTube will remove this article for misinformation. They cannot allow truth to be sent out.

I complied with the two doses . But I WILL NOT accept the booster shot . Sorry Government but you said two shots would be enough so you lied to me ....

"Must admit that the reporter managed to set a negative tone to the Moderna Vaccine. Instead of saying that it's performance is better than most, he chose to say the FDA didn't seem enthusiastic. The lack of positive journalism that seems to be emerging recently is disappointing and unnecessarily pessimistic. Hate to think that it has become necessary to mix vinegar into the honey until there is no more sweetness."

Why Reata Pharmaceuticals Nose-Dived on Monday

The FDA has raised concerns about one of the company's key pipeline candidates in advance of a crucial meeting.
MEDICAL & BIOTECH・1 DAY AGO
The Motley Fool

Why Moderna Stock Is Rising Today

Investors liked the encouraging results from a study conducted by the University of Oxford.
STOCKS・18 HOURS AGO
The Motley Fool

A positive clinical readout is lighting a fire underneath the biotech's shares today.
STOCKS・23 HOURS AGO
gastroenterologyadvisor.com

FDA Approves Both Pfizer, Moderna Boosters for All Adults

HealthDay News — The U.S. Food and Drug Administration on Friday granted emergency use of both the Pfizer and Moderna COVID-19 booster shots for all adults, clearing the way to additional vaccine protection for tens of millions of Americans. The announcement came hours before the start of a meeting of...
HEALTH・14 DAYS AGO

COVID-19 has given rise to many variants in the last two years, but none have so far managed to evade the authorized vaccines that have been administered to millions around the world. Should that ever change, Pfizer and Moderna said they stand ready to act. The emergence of the omicron...
PUBLIC HEALTH・11 DAYS AGO
Benzinga

The FDA could authorize COVID-19 boosters from Pfizer Inc (NYSE: PFE) and BioNTech SE (NASDAQ: BNTX) for use in 16 and 17-year olds as soon as next week, reports Wall Street Journal, citing a person familiar with the planning. The agency is planning to rapidly take action on a request...
MEDICAL & BIOTECH・8 DAYS AGO
ualrpublicradio.org

For the first time, people under the age of 18 may soon be eligible for a COVID-19 booster shot in the U.S. On Tuesday, Pfizer CEO and Chairman Albert Bourla said the vaccine maker had submitted its request to the U.S. Food and Drug Administration to expand the emergency use authorization of a booster dose of the Pfizer-BioNTech COVID-19 vaccine to include 16- and 17-year-olds.
INDUSTRY・7 DAYS AGO
Shore News Network

(Reuters) -A panel of expert advisers to the U.S. Food and Drug Administration will vote later on Tuesday on whether to recommend authorization of Merck & Co’s antiviral pill to treat COVID-19. The U.S. drugmaker reported on Friday that the pill’s efficacy in reducing hospitalizations and deaths had dropped to 30% with data available from over 1,400 patients in its late-stage study. It had reported about a 50% reduction a month ago using data from 775 patients.
PUBLIC HEALTH・7 DAYS AGO

An advisory group for the Food and Drug Administration (FDA) has voted to recommend Merck’s COVID-19 antiviral pill for infected adults at high risk for severe coronavirus illness, hospitalization or death.
PUBLIC HEALTH・7 DAYS AGO
EverydayHealth.com

Now that many of us with inflammatory bowel disease (IBD) are several months out from receiving two doses of the mRNA COVID-19 vaccines, the Centers for Disease Control and Prevention (CDC) has approved a booster dose of an mRNA COVID-19 vaccine for all adults 18 and up who received a second dose of the Pfizer or Moderna vaccine at least six months ago or the single-dose Johnson & Johnson vaccine at least two months ago.
PUBLIC HEALTH・7 DAYS AGO
cbslocal.com

CAMBRIDGE (CBS) – Moderna said it’s already testing its current vaccine on the B.1.1.529 (Omicron) variant of COVID-19 and has a plan in place to create a booster for the variant if needed. Moderna said the Omicron variant has mutations that may increase the transmission rate and could accelerate waning...
CAMBRIDGE, MA・11 DAYS AGO
WSOC Charlotte

An advisory committee for the U.S. Food and Drug Administration will meet Tuesday to consider recommending approval of a pill that has been shown to cut hospitalization rates for those with the COVID-19 virus. The FDA’s Antimicrobial Drugs Advisory Committee will take up the question of whether the antiviral pill...
PUBLIC HEALTH・7 DAYS AGO
massdevice.com

Acting FDA Commissioner Dr. Janet Woodcock thinks many COVID-19 tests will continue to work with the new Omicron variant — with information coming soon on vaccine efficacy. In a statement posted yesterday, Woodcock said she thought the agency is well-positioned to work with companies to address the potential impact of viral mutations on COVID-19 tests, therapeutics, and vaccines.
PUBLIC HEALTH・6 DAYS AGO
wbch.com

(NEW YORK) -- As the COVID-19 pandemic has swept the globe, more than 5.2 million people have died from the disease worldwide, including over 778,000 Americans, according to real-time data compiled by Johns Hopkins University's Center for Systems Science and Engineering. Just 59.3% of the population in the United States...
PUBLIC HEALTH・8 DAYS AGO
fox5atlanta.com

Pfizer asks FDA to expand emergency use of COVID-19 booster to include 16, 17-year-olds

Pfizer-BioNTech asked the U.S. Food and Drug Administration to expand emergency use of its COVID-19 booster dose to include 16 and 17-year-olds, according to a tweet published by the company’s CEO on Nov. 30. "It is our hope to provide strong protection for as many people as possible, particularly in...
PUBLIC HEALTH・5 DAYS AGO
Fast Company

Covid-19 booster side effects: what to expect after getting another dose of Pfizer, Moderna, or Janssen

The U.S. has now approved Covid-19 vaccine booster shots for all adults. Many are now wondering what side effects to expect after your third shot (or second shot if you were originally vaccinated with Johnson & Johnson). And thanks to the Vaccine Adverse Event Reporting System (VAERS), we now have some idea.
PUBLIC HEALTH・14 DAYS AGO
MarketWatch

Moderna Inc. said Friday it will "rapidly advance" an omicron-specific COVID-19 booster vaccine candidate and continue to work on booster candidates designed to anticipate mutations of the coronavirus and to study and test higher booster doses also meant to boost immunity. The World Health Organization's technical advisory group earlier on Friday assigned the variant, which was first reported in South Africa, the Greek letter omicron, and said it has been designated a "variant of concern." The US, the U.K. and the European Union have implemented travel bans on South Africa and neighboring countries on Friday, amid concerns the variant may be more transmissible. Shares of Moderna ended the abbreviated Friday session up nearly 21%, while shares of Pfizer Inc. rose more than 6%.
MEDICAL & BIOTECH・11 DAYS AGO
CNET

For the most up-to-date news and information about the coronavirus pandemic, visit the WHO and CDC websites. Nearly 7 million booster shots -- from Moderna, Pfizer and Johnson & Jonhson -- were given last week in the US, a record high so far. The reason? In part, according to White House Coronavirus Response Coordinator Jeff Zients, is to protect against the omicron variant. "The best thing you can do if you're concerned about Omicron is to get boosted," he said during a White House briefing on Tuesday.
HEALTH・14 HOURS AGO
Seeking Alpha

According to a peer-reviewed study published in The Lancet on Thursday, Moderna (NASDAQ:MRNA) COVID-19 vaccine has shown the strongest antibody effect in a trial that evaluated the different combinations of COVID-19 vaccines as boosters. The Phase 2 "COV-Boost" study conducted across 18 different U.K. locations involved nearly 2,900 individuals aged...
PHARMACEUTICALS・5 DAYS AGO
Knowridge Science Report

Why it’s normal for COVID-19 vaccine immunity to wane, and how booster shots can help

Vaccines are the holy grails of disease prevention. These medical marvels confer significant protection against diseases — whether a childhood infection, annual influenza or a novel coronavirus — that can easily cause undue suffering. The polio vaccine prevents polio, a highly contagious viral childhood illness that causes nerve damage and...
SCIENCE・11 DAYS AGO