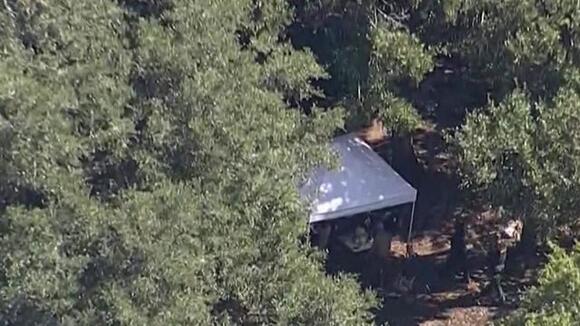 The FBI confirmed that the human remains found at a Florida reserve are those of Brian Laundrie, but questions still remain for his parents.

The search for Laundrie has led to questions about his parents' involvement especially after a breakthrough in the case was made Wednesday when they joined law enforcement in the search.

Investigators found the human remains at the Carlton Reserve alongside Laundrie’s backpack and notebook.

Former NYPD detective Ralph Cilento says the discovery of the notebook could be key in finding out why Laundrie’s fiancé Gabby Petito was killed and what happened to Laundrie himself.

Attention is on Laundrie’s parents following Petito’s homicide and their son’s disappearance.

Cilento, of the John Jay College of Criminal Justice, believes that Chris and Roberta Laundrie have been deceitful since the beginning and know a lot more than they were saying.

For weeks, Brian Laundrie’s parents have been largely silent as law enforcement scoured the 24,000-acre nature reserve for their fugitive son.

The discovery of the remains Wednesday came when Chris and Roberta Laundrie told law enforcement to search an area of the reserve that had been underwater.

“It seems clear that the odds of them looking in an area and then the parents just happen to be in that area, those odds of coincidence drop quickly for me,” Cilento says.

Cilento says there has been a lot of suspicious conduct by the Laundrie family including dropping off and picking up the cars at the reserve and remains being found in the area parents told law enforcement to look in after the water receded. He also says the family misdirected police which reserve to look at and Brian Laundrie's sister lied about not speaking to him.

“Just too many coincidences here to not believe on some investigative level that the Laundrie family was complicit in his escape,” Cilento says.

If the parents are proven to be complicit in Brian Laundrie’s escape, Cilento says they could be charged with harboring a known felon or lying to investigators.

He says the possibility of those charges may have led to the Laundries to cooperate with investigators in Wednesday’s search.

Although it now leaves the Laundries devastated that their son is dead, I hope they now feel the same sadness that The Petitos feel. I believe that the Laundries hands were dirty with the death of Gabby and knew she was dead.

Coward he couldn’t do the time for his crime. I think he told his parents that and they led FBI to the body to save themselves from being arrested.

I hope Brian Laundry suffered the way he made Gabby suffer. I hope alligators, snakes and other predatory animals made me scared and afraid. I hope in his last days that he really took a look at himself and realized just how evil he was. I hope Brian’s family will never get the sweet image of Gabby out of their minds and they will see her in their dreams and thoughts. It may seem mean but i believe they helped her son almost get away with murder!!!!!

The NYPD Hate Crime Review Panel has revealed a massive uptick in hate crimes across the five boroughs.
PUBLIC SAFETY・1 HOUR AGO
News 12

The members of the panel include civilian leaders in the Jewish, Muslim, Black, Asian and LGBTQ community in the city.
PUBLIC SAFETY・12 HOURS AGO
News 12

Akeem Samuel was found guilty of shooting Hayes in the head and torso on Andrews Avenue in the University Heights section of the Bronx.
BRONX, NY・12 HOURS AGO
News 12

According detectives, the Old Westbury Police Department located an unoccupied vehicle parked eastbound on the south service road, west of exit 39 near a storm basin.
OLD WESTBURY, NY・1 HOUR AGO

NYPD: 1 shot in the head and killed in drive-by shooting in the Bronx

Police say they responded to a report of two people shot in Bronx Sunday night.
BRONX, NY・14 HOURS AGO
News 12

Police say a synagogue in Brooklyn was burglarized multiple times in just a matter of days, and it was all captured on surveillance cameras.
BROOKLYN, NY・1 HOUR AGO
News 12

Christmas tree outside set on fire in Midtown, suspect in custody

The massive Christmas tree outside the Fox News building went up in flames overnight. Officials say someone allegedly set fire to the tree on West 48th Street around midnight.
NEW YORK CITY, NY・32 MINUTES AGO
News 12

Images sent to News 12 show disturbing differences between loved ones before and after their bodies were turned over for services at a funeral home, according to family members.
BRONX, NY・1 DAY AGO

The Newark Police Department has implemented a new violence reduction initiative following a surge in shootings over the last month.
NEWARK, NJ・14 HOURS AGO
News 12

A 17 year-old from Newburgh is facing two felonies related to the William Street shooting that happened Nov. 17.
NEWBURGH, NY・1 DAY AGO
News 12

Police say the teen was riding along Broadway near Smith Street when he was hit.
GREENLAWN, NY・9 HOURS AGO
News 12

In video obtained by News 12, a car can be seen completely mangled and flipped over.
BAY SHORE, NY・13 HOURS AGO

Officials: 4 new cases of omicron variant found in NY; 2 of them in Suffolk

The omicron variant has been found in 19 states, but doctors say the delta variant is still the cause of 99% of current cases.
NEW YORK CITY, NY・18 HOURS AGO
News 12

The Port Chester Fire Department responded to the blaze at Kingsport Housing for the Elderly, along with at least seven other departments, just before 12 p.m. Tuesday.
PORT CHESTER, NY・13 HOURS AGO
News 12

Health officials have confirmed a Fairfield County man has the second case of omicron variant in the state.
CONNECTICUT STATE・26 MINUTES AGO
News 12

There is another surge in COVID-19 cases across the world.
MONMOUTH COUNTY, NJ・23 HOURS AGO
News 12

A startling monthslong Team 12 investigation finds that tens of thousands of people are living downstream from high-hazard dams that could lead to injuries, and even death, if repairs are not made.
NEW YORK CITY, NY・9 HOURS AGO