The Sandy Post is a weekly subscriber-based newspaper publishing on Wednesdays. Our local coverage focuses on news content from East Clackamas County such as Sandy, Welches, Boring and the mountain communities. ​

Handelman: Letâ€™s put an end to our endless wars 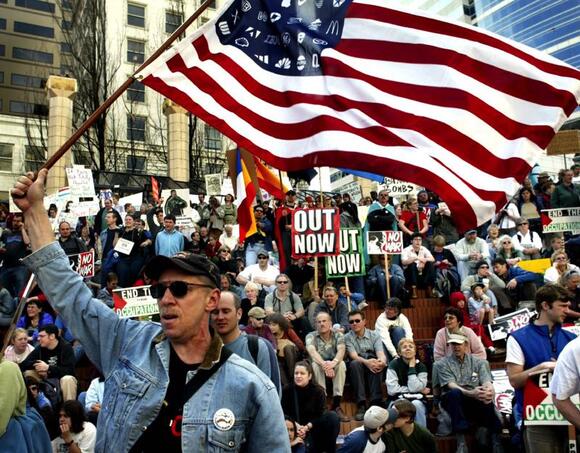 As an organization that took part in protests against the Afghan war before it began in 2001, we wish we shared the Portland Tribune editorial board's advice to celebrate the end of two decades of war.

While President Biden followed through on former President Donald Trump's pledge to pull out U.S. troops, the war has not ended. The U.S. has stated their intent to continue airstrikes from over-the-horizon positions, a tactic used during the pullout with disastrous consequences.

Guantanamo Bay prison, created in January 2002, remains open with 39 prisoners, many who have been cleared for release. The 2001 Authorization for Use of Military Force intended to target Al Qaeda in Afghanistan remains in place and was used to justify U.S. military actions in Pakistan, Yemen, Somalia, Libya and Syria. A separate 2002 use-of-force authorization to attack Saddam Hussein's regime in Iraq was repealed by the U.S. House this summer, but not yet in the Senate.

These wars are estimated to have killed more than 7,000 Americans and at least 660,000 people elsewhere. Brown University's Costs of War project estimates America's financial cost including weaponry, military personnel, veteran care and spying infrastructure is more than $8 trillion.

The U.S. does not intend to alert the Taliban to future drone strikes in Afghanistan. After an attack on the Kabul airport during the August evacuation, a U.S. drone strike killed 10 civilians, including several children and a man associated with a U.S. nonprofit. The U.S. admitted no militants were killed.

Future struggles will emerge over China's interest in the estimated $1 trillion in minerals under Afghan soil. President Biden stated that troops leaving Afghanistan would be repositioned for potential war with China.

President Biden's stated desire to bring a close to the endless wars is admirable. However, his threat after the airport attack to "hunt you down and make you pay" are not the words of a man of peace.

Congress tried to get President Trump to end support for the Saudi war in Yemen. Of eight vetoes, Trump used three to overturn those efforts.

Congress put a provision in the 2021-22 spending bill to end support for the Saudi war. That does not stop the U.S. drone strikes which began in 2004, 344 of which killed at least 209 civilians in Yemen. While strikes in Pakistan and Libya apparently stopped in 2017 and 2019 respectively, Biden and Trump each led strikes in Somalia six times in 2021, and the U.S. launched a strike in Syria as recently as September. About 900 U.S. troops remain on the ground in Syria.

When referring to Afghanistan as "America's longest war," people ignore the war against Native Americans that began before the U.S. was a nation and continued into the early 20th century and beyond. The Korean War, which started in 1950, led to an armistice in July 1953, but no peace treaty has emerged to end that war. The war against Iraq began when the U.S. imposed sanctions in August 1990, bombed in 1991 and continued both of those strategies until the invasion in 2003. Thirty-one years later, 2,500 American troops are still in Iraq.

It is unthinkable to spend money on war instead of human needs in this time of crisis. Now is time to end state-sponsored violence perpetuated by our country.

Dan Handelman of Portland is with the nonprofit Peace and Justice Works.

The US military will reinforce deployments and bases directed at China and Russia, while maintaining forces in the Middle East adequate to deter Iran and jihadist groups, the Pentagon said Monday, referencing results of a review. Global responsibilities "require us to make continuous changes to our Middle East posture, but we always have the capability to rapidly deploy forces to the region based on the threat environment," Karlin said.
FOREIGN POLICY・2 DAYS AGO
Axios

Israel has shared intelligence over the past two weeks with the U.S. and several European allies suggesting that Iran is taking technical steps to prepare to enrich uranium to 90% purity — the level needed to produce a nuclear weapon, two U.S. sources briefed on the issue tell me. Why...
MIDDLE EAST・2 DAYS AGO
Los Angeles Times

After months of study, the Pentagon has decided that no immediate major changes are needed in the global positioning of U.S. forces, officials say.
MILITARY・2 DAYS AGO
New Haven Register

Opinion: The consequences of endless war

On Aug. 29, 10 members of the Ahmadi family, seven of them children, were killed by a U.S. drone strike in Kabul, Afghanistan. While initially stating that the attack assassinated an “Islamic State extremist,” the Pentagon admitted in September that only civilians were killed. “The strike was a tragic mistake,” Marine Gen. Frank McKenzie, head of U.S. Central Command, told the press, offering apologies to the victims’ family and suggesting that the United States was “considering” giving them reparations payments. In early November, an “independent Pentagon review” concluded that the strike “was not caused by misconduct or negligence,” but that it was a mistake which happened “despite prudent measures to prevent civilian deaths.” The review did not recommend any disciplinary action. It merely noted that there were “breakdowns in communication and in the process of identifying and confirming the target of the bombing.” (“Watchdog finds no misconduct in air strike,” Associated Press, Nov. 3.)
NEW HAVEN, CT・4 DAYS AGO

Our military didn’t lose the war in Afghanistan, our politicians did

As luck would have it, it was Veterans Day when I spoke with Bing West, a former assistant secretary of defense and Vietnam veteran who embedded with dozens of platoons in Afghanistan and wrote three books about what he described, nearly from the start, as a “mismanaged” war. West is...
MILITARY・11 DAYS AGO
americanmilitarynews.com

Russian President Vladimir Putin threatened a Russian retaliation if the U.S. or NATO allies cross a “red line” by reinforcing Ukraine by sending certain weapons, such as hypersonic weapons, cruise missiles and missile defense systems, to which he said Russia will match. “If some kind of strike systems appear on...
MILITARY・1 DAY AGO
AFP

Without women and aid, Afghan economy will collapse, UN warns

When Maryam went shopping in Kabul this week after several weeks cooped up at home, the Afghan mother was shocked to discover food prices had doubled -- or even tripled -- at the market's well-stocked vegetable stalls. "It's very expensive, it's clearly visible," the 52-year-old, who lost her job after the Taliban returned to power in August, told AFP. On Wednesday, a United Nations report said Afghanistan and its population of roughly 40 million people have suffered an "unprecedented fiscal shock" since the Taliban takeover and the decision by the international community to withdraw billions in humanitarian aid. The report predicts an economic contraction of around 20 percent of GDP "within a year, a decline that could reach 30 percent in following years".
WORLD・1 DAY AGO
Newsweek

The Zircon hypersonic cruise missile, capable of flying at nine times the speed of sound to a range of 620 miles, has undergone a series of tests.
MILITARY・1 DAY AGO

The Pentagon launched a fresh probe Monday into a 2019 airstrike that killed civilians in Syria, two weeks after a New York Times investigation claimed the US military concealed dozens of non-combatants' deaths.  According to a Times investigation published mid-November, a US special force operating in Syria -- sometimes in complete secrecy -- bombed a group of civilians three times on March 18, 2019, near the Islamic State (IS) bastion of Baghouz, killing 70 people, mainly women and children.
MILITARY・2 DAYS AGO
New York Post

The second-ranking general in the US military has sounded the alarm about China’s weapons development — warning that Beijing may soon have the capability to launch a surprise nuclear strike against America. “They look like a first-use weapon,” Gen. John Hyten, the vice chairman of the Joint Chiefs of Staff,...
MILITARY・14 DAYS AGO
albuquerqueexpress.com

ISLAMABAD - The Taliban foreign minister Wednesday penned an "open letter" to the U.S. Congress, warning of a mass refugee exodus from Afghanistan unless the United States unblocks more than $9 billion in Afghan central bank assets and ends other financial sanctions against the country. Amir Khan Muttaqi wrote that...
FOREIGN POLICY・15 DAYS AGO
The Independent

Donald Trump predicts "something will happen" between Taiwan and China after the 2022 Beijing Winter Olympics while saying America is at "the lowest it has ever been". Speaking to Nigel Farage on GB News, the former president said: "There were no planes flying over Taiwan, you didn't talk about Taiwan when I was president.
SPORTS・18 HOURS AGO

White House press secretary Jen Psaki refused to discuss previous remarks from President Biden about former President Trump which claimed "anyone who is responsible" for so many COVID-19 deaths should "not remain" in the White House. During a campaign debate last fall, Biden took a jab at then-President Trump for...
PRESIDENTIAL ELECTION・19 HOURS AGO
Fox News

The now-former spokesman for District of Columbia Democratic Mayor Muriel Bowser told Fox News on Wednesday that President Biden's tenure in office has led him to change party affiliation and also to vote for GOP businessman Glenn Youngkin in the off-year gubernatorial election in Virginia, where he resides. Victor Jimenez...
PRESIDENTIAL ELECTION・13 HOURS AGO
Fortune

Subscribe to Fortune Daily to get essential business stories straight to your inbox each morning. President Joe Biden is using every tool in his arsenal to send a clear message to Americans this holiday season: Don’t pin inflation on me. Republicans have been working to blame the president and Democrats...
PRESIDENTIAL ELECTION・17 HOURS AGO

Xiomara Castro’s victory in the Honduras presidential elections has placed the Central American nation at the heart of an intensifying diplomatic tug-of-war between Taiwan and China. Honduras is one of only 15 remaining countries that recognizes the sovereignty of Taiwan, which China claims as part of its own territory. But...
PRESIDENTIAL ELECTION・19 HOURS AGO
Business Insider

Taiwan tycoon says he does not support the island's independence after China fined his vast conglomerate $74.4 million

China last week fined Taiwan's Far Eastern Group a total of $74.4 million for a series of infractions. Beijing said Taiwanese firms could not expect to operate in China and support the island's independence. Taiwan Premier Su Tseng-chang said China was "always rude and unreasonable, and does not understand democracy,...
ECONOMY・1 DAY AGO
americanmilitarynews.com

Iranian border guards clashed with Taliban forces along the Iran-Afghanistan border on Wednesday after the Taliban opened fire on Iranian farmers, according to reports. Local journalist Reza Khaasteh shared unverified video of the scene on Twitter, which appeared to show Iranian soldiers using heavy artillery to push back against the Taliban militants.
PUBLIC SAFETY・20 HOURS AGO
WashingtonExaminer

The Sandy Post is a weekly subscriber-based newspaper publishing on Wednesdays. Our local coverage focuses on news content from East Clackamas County such as Sandy, Welches, Boring and the mountain communities. ​