Is West Ham vs Genk on TV tonight? Kick-off time, channel and how to watch Europa League fixture 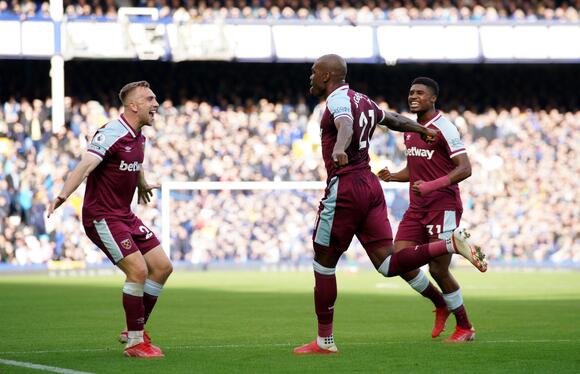 Two victories over Dinamo Zagreb and Rapid Wien have David Moyes’ team top of the group and big favourites to see off their Belgian opponents tonight, which would leave them in a very strong position to reach the knock-out phase.

The boss may then be tempted to put another strong side out to get the job done as quickly as possible, particularly on home soil for this game with the fans hoping to see stories being written at their still-new ground.

Genk have struggled domestically this season and sit eighth in the league, with one win and one defeat in the Europa group so far.

The game kicks off at 8pm on Thursday 21 October at the London Stadium.

The match will be shown live on BT Sport 2 and BT Sport Ultimate. Subscribers can stream the match via the BT Sport app and desktop website.

Alex Kral is out after missing the weekend game due to a positive Covid test but Vladimir Coufal should return. Even so, Ben Johnson could keep his place after a good performance against Everton. Mark Noble is a doubt.

Daniel Munoz is suspended for Genk after being sent-off in their last Europa League match.

No need for the Hammers to change too much and no reason to think they won’t produce the goods once more. West Ham 2-0 Genk .

West Ham beat leaders Chelsea 3-2 courtesy of Arthur Masuaku's bizarre late goal on Saturday as Liverpool climbed to the top of the Premier League with a last-gasp winner against Wolves. On a day when all the contenders in the top flight are in action, champions Manchester City can claim top spot they win the late match against struggling Watford. Elsewhere, Newcastle won for the first time this season to clamber off the bottom of the table and give new manager Eddie Howe hope they can survive. Thomas Tuchel's Chelsea had lost just once in the Premier League before Saturday's match at the London Stadium and had conceded only six goals in 14 matches.
PREMIER LEAGUE・2 DAYS AGO
NBC Sports

Manchester City vs West Ham: The defending Premier League champions, on short rest, will face a formidable foe seeking to further their case for a top-four finish at the Etihad Stadium on Sunday (Watch live at 9 am ET, on Peacock Premium). Coming from behind to beat PSG in the...
PREMIER LEAGUE・10 DAYS AGO
The Independent

Manchester City host West Ham today in a Premier League top-four battle at the Etihad Stadium.Pep Guardiola's side come into the game full of confidence following back-to-back wins in the Premier League before victory over PSG in the Champions League in midweek. City came into the weekend second in the table behind leaders Chelsea, and can ill-afford a slip-up now. FOLLOW LIVE Man City vs West Ham build-up, team news, score and goal updatesThe Hammers had been flying with four wins on the bounce until last weekend's surprise defeat at Wolves, and David Moyes knows it will be a tough...
PREMIER LEAGUE・9 DAYS AGO
Absolute Chelsea

West Ham vs Chelsea: How to Watch/Live Stream | Premier League

Chelsea travel from west to east on Saturday afternoon for the Premier League London derby against West Ham. Thomas Tuchel's side head to the London Stadium following a 2-1 win in midweek over Watford to maintain their place at the top of the table. Meanwhile, West Ham were struck with...
PREMIER LEAGUE・4 DAYS AGO

Michael Carrick takes charge of Manchester United for the first time after Ole Gunnar Solskjaer’s sacking on Sunday. The Red Devils find themselves in a desperate situation, having been thrashed by Watford at Vicarage Road, leaving them 12 points off leaders Chelsea in the Premier League and six points off fourth.FOLLOW LIVE: Team news and latest updates as Man United face Villarreal in Champions LeagueTheir position in the Champions League is far from comfortable either, and this game will go a long way to deciding who will top Group F and who will qualify, with United already holding a victory...
PREMIER LEAGUE・13 DAYS AGO
USA TODAY Sports Media Group

Dynamo Kiev will meet Bayern Munich in the Group Stage of the Champions League on Tuesday afternoon. Dynamo Kiev has really struggled this tournament while sitting in last place they will have a tough match ahead of them today. Meanwhile, Bayern has already secured a spot in the last 16 and will be playing a routine match this afternoon.
UEFA・13 DAYS AGO
CBS Sports

The Champions League returns to action Tuesday on Paramount+. We're heading into Matchday 5 of the Champions League group stage, and Juventus will be playing Chelsea at 3 p.m. ET Tuesday, Nov. 23 at Stamford Bridge. Juventus collected three points with a 4-2 win over Zenit in their previous leg. Likewise, Chelsea won 1-0 against Malmo three weeks ago. Right now, Juventus (12 points) leads Group H, while Chelsea (nine points) is in second place in the group. Recall that only the top two teams in the group will advance to the knockout phase.
UEFA・14 DAYS AGO

Arsenal welcome Newcastle to the Emirates in the Premier League’s early kick-off on Saturday. The Gunners’ unbeaten run came to a humbling end last time out, as they were thrashed 4-0 by Liverpool at Anfield. However, Mikel Arteta’s side remain on good footing in the table, with just three points separating them from West Ham in fourth. Follow Arsenal vs Newcastle LIVE!That is in stark contrast to Newcastle, who sit rock bottom after twelve matches and are yet to win a match this season. Eddie Howe still hasn’t had the chance to work with his players properly on the...
PREMIER LEAGUE・10 DAYS AGO
The Independent

Villarreal vs Barcelona live stream: How to watch LaLiga fixture online and on TV tonight

Villarreal host Barcelona in LaLiga on Saturday night, with both sides far further down the league table than they would have been hoping for at this stage of the season.The home side might have appealed to Unai Emery to stay in the wake of interest from Newcastle United recently, but it has been far from smooth for them this term and they sit 12th in the table ahead of the weekend after just one win in the last six in the league.For Barca, they are set for their third match under new boss and former legendary midfielder Xavi Hernandez; so...
PREMIER LEAGUE・10 DAYS AGO
The Independent

Ellen White is set to win her 100th England cap when the Lionesses host Austria in World Cup qualifying this afternoon. England will be aiming to continue their perfect start to Group D, having won their opening four matches of the qualifying campaign. Sarina Weigman’s side recorded a 4-0 win over Northern Ireland and a 10-0 victory over Latvia last month but Austria are set to be their toughest test of the group. White is also closing in on Kelly Smith’s England goalscoring record and is two goals away from equalling her tally of 46. Here’s everything you need to...
WORLD・10 DAYS AGO
USA TODAY Sports Media Group

The Premier League is back in action on Thursday. Current Records: Brentford 4-5-4; Tottenham Hotspur 6-5-1 Tottenham Hotspur has the luxury of staying home another week and will welcome Brentford at 2:30 p.m. ET Dec. 2 at Tottenham Hotspur Stadium. Both clubs are tiptoeing into their match after sneaking past their previous opponents.
PREMIER LEAGUE・5 DAYS AGO
SB Nation

A frantic start and a spirited second half; more encouraging signs under Steven Gerrard?. Super Ollie Watkins! How brilliant was he and could we have had a couple more goals?. Should we see Douglas Luiz remain in a more advanced midfield role?. Emi delight and Bailey frustrations; what can we...
PREMIER LEAGUE・4 DAYS AGO
San Diego Union-Tribune

Maupay rescues 1-1 draw for Brighton at Southampton in EPL

Neal Maupay's goal in the eighth minute of injury time rescued a 1-1 draw for Brighton at Southampton in the English Premier League
SAN DIEGO, CA・2 DAYS AGO
The Independent

Callum Wilson finally handed Newcastle their first Premier League win of the season at the 15th attempt as they rode their luck to see off fellow strugglers Burnley Eddie Howe’s men were decidedly second best for long periods in front of a crowd of 51,948 at St James’ Park but made the most of a slice of good fortune when Wilson blasted home his sixth goal of the season after goalkeeper Nick Pope had dropped the ball at his feet.The 1-0 victory, which was a reward for hard work and doggedness rather than quality, lifted the Magpies off the foot...
PREMIER LEAGUE・2 DAYS AGO
San Diego Union-Tribune

Defending champion Manchester City is on top of the English Premier League for the first time this season after a 3-1 win at Watford
SAN DIEGO, CA・2 DAYS AGO
San Diego Union-Tribune

Bamford marks return with late equalizer for Leeds in EPL

Patrick Bamford marked his first appearance in more than two months with an equalizer in the fifth minute of added time to earn Leeds a 2-2 draw at home to Brentford in the Premier League
SAN DIEGO, CA・1 DAY AGO
BBC

We're now less than an hour away from kick-off between Manchester United and Crystal Palace at Old Trafford. You'll be able to catch up with all the post-match reaction on this page after full-time.
PREMIER LEAGUE・2 DAYS AGO