DILLON, Colo. (CBS4) – A program in Summit County aimed at responding to those in the midst of a mental health crisis has caught the attention of state leaders. Earlier this month Gov. Jared Polis traveled to Dillon to talk to community leaders about what makes the Summit County model so successful. 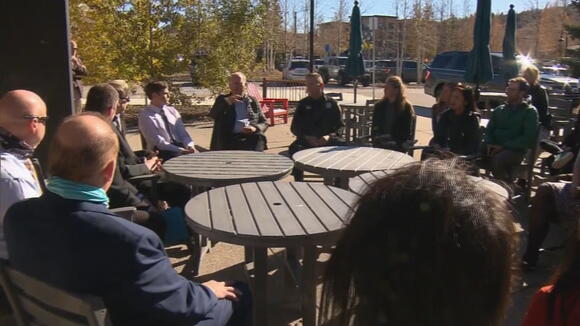 “First of all, we build it from the community up as opposed to law enforcement down, which is really important,” said Summit County Sheriff Jaime FitzSimons.

“There’s a lot of community support with this team. The other thing is, it’s a plain-clothed response meaning they don’t show up in uniform. They do show up as a team, and they show up in plain clothes, an unmarked car, and they go into all the towns here in the jurisdictions of Summit County so it’s a county-wide response,” he said.

The response also always involves a deputy paired with a clinician. That’s the co-response part of the program, but it extends beyond just that initial contact.

“They have a third component to their team which is a case manager, so I always describe it as, in a moment of crisis, it’s the deputy and the clinician. They have the heavy lift in the moment of crisis and stabilization — and stabilizing that person in the community. On the back end is the case manager who comes in now and provides the wrap-around service for continued stabilization,” said FitzSimons. 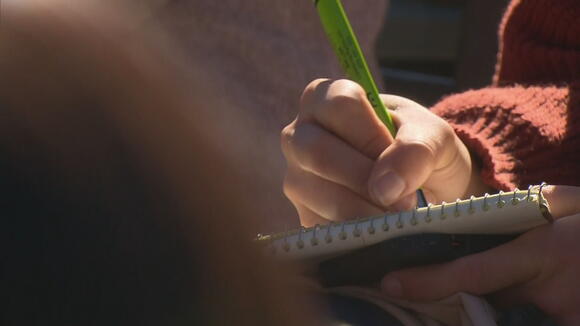 Over the last 10 months, the co-response has saved hundreds of people from landing in the emergency room, saved the ER from overflowing and saved the county money. FitzSimons and his team estimate that for every person they can help avoid a trip to the ER it saves county around $15,000.

“This year so far in the first 10 months of this year were just over $2 million. It’s a huge number, but more importantly it’s the amount of people we’ve stabilized versus sending people off to a higher level of care or crushing our ER. We’ve stabilized an incredible amount of people what we say ‘in place’ whether it be home wherever that place is, but not going to a higher level of care that’s what crushed the community.”

FitzSimons believes any community can take the program and make it successful, but what works in Summit County will likely be different for Denver. In Summit County the start-up cost for the program is around $425,000 and while its been a successful program, funding has been one of the biggest hurdles.

Pay special attention to veterans and their mental health during the holidays, doctor says

PHOENIX - The holidays are full of emotions, but stress especially can really build up this time of year, and veteran organizations across the country want to remind you to look out for our service men and women during this vulnerable time. Marine Sgt. Jordan Maynard, a veteran, shared his...
HEALTH・13 HOURS AGO
Summit Daily News

Summit County set a new all-time record on Colorado Gives Day, raising $739,404 to support 49 local organizations. The fundraising total beat the previous record, which was set last year during the height of the COVID-19 pandemic, by more than $116,000, according to a news release from The Summit Foundation.
COLORADO STATE・11 HOURS AGO
pagosadailypost.com

This investigation is part of the ongoing “On Edge” series about Colorado’s mental health by the Colorado News Collaborative, the nonprofit that unites more than 160 communities and news outlets like ours to ensure quality news for all Coloradans. Despite the workforce shortage, the Colorado Behavioral Healthcare...
COLORADO STATE・9 HOURS AGO
Axios Denver

Colorado's behavioral health leader is resigning his post amid intense scrutiny about the massive gaps in the state's mental health safety net.Driving the news: Robert Werthwein, the Polis administration's director of the Office of Behavioral Health, sent an email to employees Tuesday saying he would step down at the end of February 2022 to seek a position outside the agency, according to an email obtained by Axios Denver.The announcement came two days after an investigation by the Colorado News Collaborative found Colorado's community mental health centers are receiving noncompete contracts, over-billing the state and treating fewer clients during the pandemic...
COLORADO STATE・2 HOURS AGO

BOULDER COUNTY, Colo. (CBS4) – More than 20 wastewater facilities in Colorado are now voluntarily providing samples for the state’s COVID-19 surveillance program. “One of the ways we use our wastewater surveillance data is to identify how much COVID, and if there’s variant COVID in a community,” Rachel Jervis said. (credit: CBS) Jervis is an Epidemiologist for Colorado Department of Public Health and Environment. She helps analysis the samples coming into the state lab. Their work recently uncovered signs of the omicron variant likely spreading in Boulder County. “With omicron for example we are early in omicron detection. Our lab has been able to detect...
COLORADO STATE・9 HOURS AGO
CBS Denver

BOULDER COUNTY, Colo. (CBS4) – The Boulder County District Attorney is speaking out over what he calls the reckless and haphazard release of high risk offenders from court. An investigation by CBS4’s Shaun Boyd last month found judges in Denver County Court have released thousands of people charged with violent felonies on low or no bond. Boyd has now learned Denver isn’t alone. Boulder District Attorney Michael Dougherty says Boulder District Court judges are also releasing a growing number of dangerous defendants, in many cases, without any bond. Last month, police say one of those individuals went on to kill someone. Brian Murray (credit:...
BOULDER COUNTY, CO・13 HOURS AGO
CBS Denver

ARAPAHOE COUNTY, Colo. (CBS4)– There have been 363 complaints so far involving the Tri-County Health Department mask mandate which covers Adams and Arapahoe counties. Most involve businesses not enforcing the rules. (credit: CBS) The mandate is clear: you must wear a mask for indoor public spaces. Ninety of the complaints involve gyms. One member complained about the lack of masks and was told by a gym employee, “We don’t have to go through all the crap we did before.” Tri-County Environmental Health Director Brian Hlavacek says there is a right way to do it, “Please put on a mask if you are going to...
ARAPAHOE COUNTY, CO・14 HOURS AGO
CBS Denver

DOUGLAS COUNTY, Colo. (CBS4) – The Douglas County School Board has voted to remove its face mask requirement in schools. In a vote of 4 to 3, the board approved a resolution that eliminates the mask mandate. (credit: Getty Images) The resolution, which goes into effect immediately, also calls for no COVID-19 vaccine mandate. It also calls for individual determinations on each student with unique circumstances. The vote came after several hours of debate and public comment that went early into Wednesday morning. Some discussed how removing the face mask mandate will take the burden off teachers and put the focus back on learning. (credit: Getty Images) “In regards to teachers, I think some will be relieved to have being the mask police off their plate,” said one school board member. The 2021-2022 school year started with a mask requirement. Douglas County then left Tri-County Health and formed its own health department which loosened the mask requirements. That was knocked down in a federal court lawsuit by the school district.
DOUGLAS COUNTY, CO・22 HOURS AGO

PLAINFIELD (Inside INdiana Business) – The Duke Energy Foundation is awarding nine grants totaling $255,000 for mental health and substance abuse programs throughout Indiana. Stan Pinegar, president of Duke Energy Indiana in Plainfield, says the state has seen a rise in mental health and substance use disorders since the start of the COVID-19 pandemic.
PLAINFIELD, IN・1 DAY AGO
NBC Washington

D.C. is changing how it handles mental health 911 calls and says it's already making an impact. Almost 25% of people shot by police in the U.S. each year are experiencing a mental health crisis, according to a 2020 report from the National Association of State Mental Health Program Directors.
MENTAL HEALTH・1 DAY AGO
CBS Denver

Staffing Issues, Mistake Lead To Cancellation Of 2 Vaccine Clinics Set Up For Coloradans To Get Boosters

(CBS4) – As the world continues to watch omicron closely, the State of Colorado’s message remains the same: Get your vaccine doses. They are adding community vaccine clinics so Coloradans can get their boosters hoping to make it easier. Things didn’t wind up being easier for Kevin Wood. He told CBS4 he was trying to get a booster at Ball Arena but left after learning the Colorado Department of Transportation’s mobile vaccine bus which was scheduled to be there was not. “No signs. No bus. Drove down to one parking lot and the other parking lot and drove back and walked around,”...
COLORADO STATE・23 HOURS AGO

‘This Is Offering Them Shelter For The Night’: City Of Northglenn Converts Old Rec Center Into Winter Housing For Homeless

NORTHGLENN, Colo. (CBS4) – With an abandoned building awaiting a new purpose, the City of Northglenn wasted little time to convert its old recreation center into a winter housing facility for people experiencing homelessness. (credit: CBS) “We don’t have the resources that a big city like Denver does to deal with an issue like people without homes,” said Dr. Katherine Goff, a Northglenn City Council member. “It just was a perfect time to make better use of this empty facility,” said Dr. Goff. The idea came together quickly and was approved by the city council on Monday night. The operation should be up and...
NORTHGLENN, CO・19 HOURS AGO
CBS Denver

DOUGLAS COUNTY, Colo. (CBS4) – The subject is controversial. The debate is heated. The political maneuvering is extensive. Now, four members of the seven-member Douglas County school board are new and seen as more conservative. They also hold the majority. Becky Myers, Dougco School Board Secretary, spoke at a study session last week. (credit: CBS) “What we are voted in and being honorable to what we were voted in for they need to see that we are stepping up and doing something for the community that has asked us. That is why we want to start right now with our mask mandate,” she...
DOUGLAS COUNTY, CO・1 DAY AGO
The Denver Gazette

Students' mental health challenged in a culture of guns; what's happening in Colorado?

Dec. 14 marks nine years since Jane Dougherty told her sister hello and goodbye, but for a disturbed young man's access to guns in Newtown, Connecticut, a New England village that was decked out for a Christmas, that was emotionally obliterating. Her older sister, Mary Sherlach, a school psychologist, was...
COLORADO STATE・2 DAYS AGO

DENVER (CBS4)– Inside the Colorado Department of Public Health Laboratory Building, they are hunting for a possible killer. That killer is the coronavirus known as COVID-19. (credit: CBS) More than 9,500 people have died from COVID-19 in Colorado. The lab has examined 2.9 million tests. Last week, they discovered the first case of the Omicron variant tied to an Arapahoe County woman who had been in Southern Africa. Emily Travanty is the state laboratory director says, “This person experienced complaints and sought testing and the result of that test, which was not done here, once the results came back into the state reporting...
COLORADO STATE・2 DAYS AGO
CBS Denver

DENVER (CBS4) – Two cases of the omicron variant have already been confirmed in Colorado. Medical experts expect the case count will rise as the COVID-19 variant rapidly spreads across the globe. “If you look at data from South Africa, [omicron] seems to be spreading 2-3 times more quickly than delta, which means it’s going really fast,” said Dr. Michelle Barron, Senior Medical Director of Infection Prevention and Control at UCHealth. (credit: CBS) Barron said preliminary data shows symptoms may be less severe than those brought on by other variants of the virus. That is encouraging, yet there is still much more to...
COLORADO STATE・2 DAYS AGO
LocalNewsMatters.org