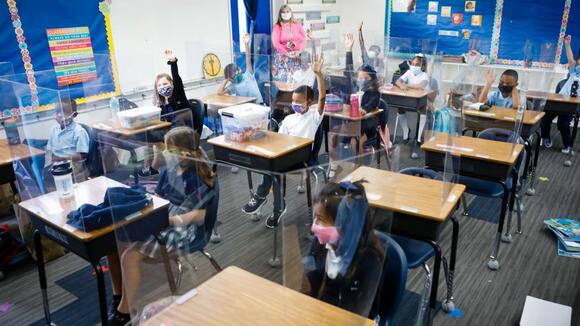 TALLAHASSEE (CBSMiami/NSF) – The State Board of Education on Wednesday approved a new rule aimed at shaping civic education in public schools.

The rule, which centers in part on teaching students about characteristics that make an “upright and desirable” citizen, is the culmination of legislation passed by state lawmakers earlier this year.

Making changes that inject patriotism into the curriculum was a priority of top Republican lawmakers and Gov. Ron DeSantis during the legislative session that ended April 30.

At a bill-signing event in June, DeSantis called the civic curriculum “fundamental.” The rule approved Wednesday directs the state Department of Education to require that students understand the nation’s founding documents.

It also involves instilling patriotic values in schoolchildren. According to the rule, traits of a desirable citizen include respect for “the military, elected officials, civic leaders, public servants, and all those who have defended the blessings of liberty in pursuit of the common good, even at personal risk.”

The rule also requires that students be taught “how political ideologies, such as communism and totalitarianism, conflict with the principles of freedom and democracy essential to preserving the United States constitutional republic.”

Department of Education Chancellor Jacob Oliva said the new rule, in conjunction with updated civic education standards approved by the board in July, is “timely” as the state looks to purchase new textbooks.

Oliva said the new civic education curriculum could be reflected on end-of-course exams by the 2023-24 school year.

(©2021 CBS Local Media. All rights reserved. This material may not be published, broadcast, rewritten, or redistributed. The News Service of Florida contributed to this report.)

Liberalism is a mental disorder. Thanks for the updates. Need to explain the constitution so they understand what the democRATs are trying to destroy.

I can't wait to read this. We have some public officials that have been less than good examples for our children.

If only the state board of Ed would act this quickly to funding and other real needs of Florida schools, teachers, students. Does no one see the scary parallels to jingoism in history?

Dramatic video shared on social media shows students fleeing a classroom after fearing a shooter in a deadly attack at a Michigan high school was at the door, trying to lure them out. Three students were killed and eight others injured in the shooting at Oxford High School in suburban...
MICHIGAN STATE・2 HOURS AGO
Fox News

The scope of abortion in the U.S. is at stake Wednesday as the Supreme Court hears oral arguments in Dobbs v. Jackson Women's Health, potentially the most consequential challenge to the 1973 Roe. v. Wade landmark ruling that limited government restrictions on abortion. Here are some key details about the case and what you can expect:
CONGRESS & COURTS・1 HOUR AGO
ABC News

An advisory group for the Food and Drug Administration (FDA) has voted to recommend Merck’s COVID-19 antiviral pill for infected adults at high risk for severe coronavirus illness, hospitalization or death. The panel narrowly endorsed Merck’s five-day oral treatment in a 13-10 vote on Tuesday. The advisers recommended the FDA...
INDUSTRY・15 HOURS AGO

A defense attorney for Kim Potter says the former Brooklyn Center police officer will testify in her manslaughter trial over the killing of Daunte Wright. While questioning a prospective juror, defense attorney Paul Engh said Potter will take the stand, CBS Minnesota reports. The development came as lawyers and a...
BROOKLYN CENTER, MN・18 HOURS AGO
ABC News

CNN says it is suspending anchor Chris Cuomo indefinitely pending a further review of documents revealing how he helped his brother, former New York Gov. Andrew Cuomo, when he was facing charges of sexual harassment
CELEBRITIES・11 HOURS AGO
ABC News

Dr. Mehmet Oz officially declared his candidacy in the Pennsylvania Senate race on Tuesday.
PENNSYLVANIA STATE・41 MINUTES AGO
The Hill

A pair of rulings by separate federal judges Tuesday temporarily halted parts of the Biden administration’s mandatory COVID-19 vaccine policy for certain workers. One ruling, issued by a Louisiana-based federal judge, effectively blocked a vaccine mandate for health workers across the country at hospitals that receive federal funding. A second...
CONGRESS & COURTS・13 HOURS AGO

It was an emotional day at the sex-trafficking trial of British socialite Ghislaine Maxwell as one of disgraced financier Jeffrey Epstein's alleged victims testified against Maxwell. Taking the stand as "Jane" to protect her identity, the first victim to testify in Maxwell's trial said she was 14 and frozen in...
PUBLIC SAFETY・30 MINUTES AGO
CNN

How worried should we be about Omicron, the new coronavirus variant?

(CNN) — Since South African authorities announced the arrival of a new coronavirus variant that contains an unusually large number of mutations, countries around the world have mobilized by putting into place travel restrictions and precautionary measures. There is much that's still unknown about this variant, Omicron. While scientists are...
PUBLIC HEALTH・12 HOURS AGO