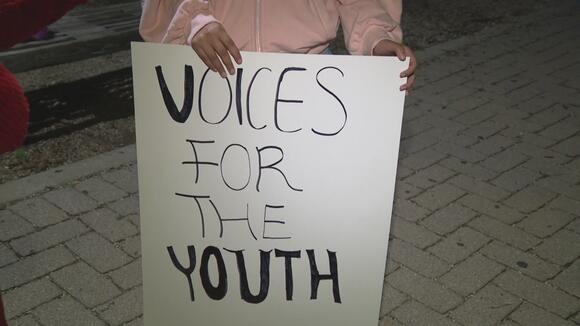 A CPS local school council (LSC) member named Glenda, a survivor of childhood sexual abuse, said she is disgusted by the school’s response.

“After five allegations have come up since 2019 — five — some of these LSC members, you have said nothing,” she said.

The sexual assault survivor accused the school’s principal and other LSC members of staying silent, says those allegations are against staff members at the school.

She adds that the first allegation she heard as an LSC member was in Sept. 2019.

“CPS says one is too many and Juarez has had more than one over the last five years,” said a woman who did not wish to be identified.

The woman told WGN that she was punished and ridiculed after speaking up about sexual assault on two occasions. She said a change of culture is needed.

“I can only imagine how our students feel when they have to report these incidents to staff members and they don’t listen,” she said.

Another teen girl, who did not wish to be identified, said that while she does not attend Benito Juarez Community Academy, she suffered abuse during her sophomore year.

After speaking up about her abuse, she said her school provided minimal comfort.

“It’s really important to speak up about this because it’s disgusting knowing there are more schools doing this,” she said.

Freshman Josajandy Alonso said the allegations levied at the school council are alarming.

“I didn’t know this was happening and if I did, I would have chosen another school instead of this high school,” Alonso said.

WGN News reached out to CPS for comment regarding allegations of sexual misconduct. CPS did not immediately return our requests.

DEERFIELD, Ill. — Two men were honored as heroes Sunday at a CPR class in Deerfield for helping save a teacher’s life months ago. For Steve Farber, a math teacher at Glenbrook South, this type of training is the reason he is here today. In October, his heart stopped on the court while playing paddle […]
DEERFIELD, IL・17 HOURS AGO
WGN News

Two women from the Chicago area were among three people fatally wounded in a shooting Sunday morning at a short-term rental home near Beverly Hills. The victims are Iyana Hutton, 33, from Chicago, Nenah Davis, 29, from Bolingbrook, Illinois and Destiny Sims, 26, from Buckeye, Arizona, according to the Los Angeles County Coroner’s Office. On […]
BEVERLY HILLS, CA・18 HOURS AGO
WGN News

CHICAGO — An armed group of people committed 13 robberies in two hours from Kenwood to Bridgeport, according to the Chicago Police Department. The incidents happened in the Bridgeport, Bronzeville, Kenwood and Oakland neighborhoods, and each time — according to police — the offenders drove up in a vehicle and stopped in the street near […]
CHICAGO, IL・15 HOURS AGO
WGN News

CHICAGO — In August 2021, Treasure Hendrix took her final breath inside an RV parked in a lot along an industrial stretch of South Western Avenue.  That RV was owned by Chicago Police officer Charlie Bell, who was also inside the vehicle when Hendrix died. When he awoke on Aug. 19, 2021, he found her unresponsive, called […]
CHICAGO, IL・1 DAY AGO
WGN News

CHICAGO — Chicago high school students are now able to get a jumpstart on their future with a career fair hosted at the Future Obama Presidential Center in Jackson Park. Lakeside Alliance, a joint venture of the five construction firms tasked with building the Obama Center hosted this career fair. “We really wanted students to […]
CHICAGO, IL・1 DAY AGO
WGN News

WAUKEGAN, Ill. — A major expansion for College of Lake County’s (CLC) Lakeshore Campus in Waukegan gets a ribbon cutting Monday. According to CLC’s website, the new student center includes: Governor JB Pritzker is taking part in the ribbon cutting which WGN plans to livestream within this story beginning at approximately 11 a.m. The center’s […]
WAUKEGAN, IL・36 MINUTES AGO
WGN News

LISLE, Ill. — Two men from Michigan were arrested on weapons charges early Saturday morning in Lisle after police said they were standing outside a gas station with guns. Lisle Police Department officers were called around 2:15 a.m. to the Speedway on Ogden Avenue near the Veterans Memorial Tollway ramp on the report of a […]
LISLE, IL・18 HOURS AGO
WGN News

CHICAGO — Chicago Public Schools (CPS) continues to expand its offerings of early learning programs with the latest effort landing in Lincoln Park. CPS held a ribbon cutting ceremony Friday for its new early learning center. The center comes with the capacity to serve up to 200 children, according to a press release. It is […]
CHICAGO, IL・3 DAYS AGO
WGN News

GPD: 2 men shot and killed within 24 hours of one another in Gary

GARY, Ind. — Two men were killed within a 24-hour span in Gary from Saturday evening to Sunday afternoon, according to the Gary Police Department. Police said they were first called to the 700 block of West 45th Avenue around 7:34 p.m. Saturday on reports of a gunshot victim. When officers arrived on scene, they […]
GARY, IN・19 HOURS AGO
WGN News

CHICAGO — A 15-year-old boy was allegedly shot in the hand in the city’s West Pullman neighborhood early Saturday morning. According to police reports, the boy was sitting on the passenger’s side in a car at the 100 block of West 127th Street on Saturday around 1:48 a.m. when someone in a grey sedan fired […]
CHICAGO, IL・1 DAY AGO
WGN News

Remains found in Lake County in 2022 identified as Chicago woman

LIBERTYVILLE, Ill. — The human remains of a woman found last year in Libertyville have been identified as a 54-year-old woman from Chicago, the Lake County Coroner’s Office announced Saturday. On Nov. 19, partial skeletal remains were found in a building in the 1800 block of Hollister Drive. A K-9 from the Lake County Sheriff’s […]
CHICAGO, IL・1 DAY AGO
WGN News

CHICAGO — The Monterey Park shooting is still fresh for many in Chicago’s Asian-American community. A candlelight vigil was held in the Plaza of Chinatown to honor those who died in the shooting in California. They held a moment of silence and read the names of the victims. It’s a heartbreaking incident that is still […]
CHICAGO, IL・1 DAY AGO
WGN News

No one is in custody.
JOLIET, IL・2 DAYS AGO
WGN News

CHICAGO — Rev. Jesse Jackson, along with members of the Rainbow PUSH Coalition members addressed the brutal killing of Tyre Nichols and the indictment of the Memphis officers in a press conference Saturday morning. According to a release, Jackson and Acting National Director of the coalition, Bishop Tavis L. Grant II called leaders around the […]
CHICAGO, IL・2 DAYS AGO
WGN News

CHICAGO — A 52-year-old man and three-year-old boy were injured in a drive-by shooting in the city’s Back of the Yards neighborhood early Saturday morning. Police say the man has his car parked near the 5400 block of South Damen Avenue around 2:00 a.m. with the boy sitting in the back seat when an individual in […]
CHICAGO, IL・2 DAYS AGO
WGN News

ELGIN, Ill. — A man was found dead by the Elgin Police Department after responding to a report of a battery early Saturday morning. According to police, officers were called to the 700 block of West highland Avenue around 2:18 a.m. on a report of a battery. When police arrived on scene, they found a […]
ELGIN, IL・1 DAY AGO
WGN News

CHICAGO — Chicago and Cook County moved into the Low COVID-19 Community Level, a first since last year, according to the latest data from the CDC. New local COVID-19 hospital admissions dropped below the threshold of 10 per 100,000 over seven days for the first time since mid-November of 2022.
CHICAGO, IL・2 DAYS AGO
WGN News

CHICAGO — The city and county have jointly launched a new, free resource for individuals who need health or social services support: 211 Metro Chicago. Now available via phone, text, or web chat, 211 Metro Chicago is a database search for all Cook County residents. The program is completely free with a purpose to connect […]
CHICAGO, IL・3 DAYS AGO
WGN News

JOLIET, Ill. — A 45-year-old man is facing charges of aggravated arson for allegedly setting a Joliet home on fire while his girlfriend and four others, including three children, were present. According to the Joliet Police Department, Kevin Williams reportedly got into an argument with his 47-year-old girlfriend at the home in the 1500 block […]
JOLIET, IL・1 DAY AGO