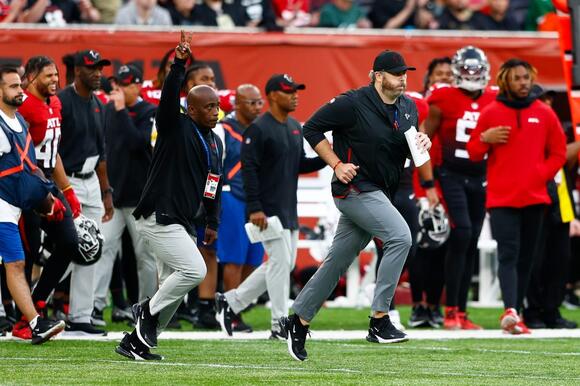 Check out odds, plays and more for the Atlanta Falcons vs. Miami Dolphins NFL Week 7 matchup on October 24, 2021.

Oddsmakers expect the Miami Dolphins (1-5) to be competitive in their attempt to break their five-game losing streak, as they are just 2.5-point underdogs in a matchup against the Atlanta Falcons (2-3) on Sunday, October 24, 2021 at Hard Rock Stadium. The contest has an over/under of 47.5 points.

Odds for Falcons vs. Dolphins

Discover player props odds, plays, and insights for Mike Evans in his Week 13 contest with the Tampa Bay Buccaneers against the Atlanta Falcons.
NFL・3 DAYS AGO
Yardbarker

Arthur Smith on Cam Newton: 'It could be a Problem'

When the Atlanta Falcons lost to the Carolina Panthers 19-13 on Halloween earlier this season, Sam Darnold was playing quarterback for the Panthers. Darnold was injured in that game, and the Panthers signed Cam Newton on November 11th. Newton has had two starts with mixed results, but Falcons head coach Arthur Smith understands the threat posed by Newton.
NFL・9 HOURS AGO
San Diego Union-Tribune

Matt Ryan has his share of critics; it is part of the job of quarterback, especially when an offense struggles as the Atlanta Falcons' has this season. And no, it's just just Joe Fan who is issuing criticism of the 36-year-old team leader. "Few QBs frustrate me more watching film than Matt Ryan,'' ...
NFL・1 HOUR AGO
Falcon Report

This IS A Rebuild: Grades Highlight Big Problem For Atlanta Falcons

The Atlanta Falcons vs. New England Patriots grades from PFF are in, and they're not pretty.
NFL・19 DAYS AGO
ClutchPoints

Atlanta Falcons star wide receiver Calvin Ridley has been away from the team since late October while he deals with mental health struggles. The Falcons placed the 26-year-old on the non-football injury list earlier this season. As of Monday, Ridley is eligible to be activated and return to the team,...
NFL・16 DAYS AGO
FanSided

If there is one thing the Atlanta Falcons have not been known for during their history, it is having dominant pass rushers. In their 50 plus years of being a team, they have struggled to find dominant sack artists. However, they have had a couple through the years, and sadly...
NFL・4 DAYS AGO

The Atlanta Falcons made a surprise cut on defense among their roster moves on Tuesday.
NFL・29 DAYS AGO
92.9 The Game

Why Falcons should steer clear of re-signing Cordarrelle Patterson to a long-term deal?

It's been a frustrating season for Atlanta Falcons linebacker Mykal Walker, and now someone has stolen his car.
NFL・16 DAYS AGO
Sportsnaut

For Michael Vick to ultimately be right about this edition of the Atlanta Falcons, they need more weapons.
NFL・20 DAYS AGO
Falcon Report

Former Atlanta Falcons receiver Julio Jones has another setback with the Tennessee Titans as one of the worst seasons of his career continues.
NFL・25 DAYS AGO
Midland Reporter-Telegram

BEVERLY HILLS, Calif. - Michael Vick appears in the lobby dressed in all-black sweats, a look that helps one of the NFL's most famous - and at one point, most infamous - retirees find a seat in the middle of the hotel's restaurant without notice. He's lean and fit; the gray hairs on his chin are all that keep you from assuming Vick could still make a pair of defenders comically take out each other in an attempt to tackle him.
NFL・10 DAYS AGO
Falcon Report

While the Chiefs' win forced a four-way tie atop the AFC, the lowly Lions finally experienced the thrill of victory.
NFL・2 DAYS AGO
ninetynineyards.com

Matt Ryan has been a superstar in Atlanta. It’s hard to argue that the five time Pro Bowler and 2016 All Pro hasn’t been the best QB in Falcons’ franchise history. But all good things must come to an end. Despite posting his best completion percentage since 2018, Ryan’s performance...
NFL・11 DAYS AGO
FanSided

There is no denying that Calvin Ridley has had a disappointing fourth year with the Atlanta Falcons. After a year in which he set career highs in all major statistics for a wide receiver, he has done virtually nothing. A large reason for that is the fact that he has had to sit out numerous games due to his mental health, which he should always prioritize over the game of football.
NFL・2 DAYS AGO