US and EU ambassadors: Enforce U.N. sanctions on North Korea 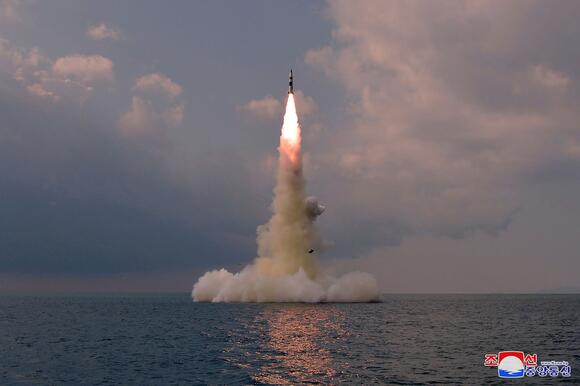 The United States and several European countries on Wednesday condemned North Korea’s recent missile tests and said Pyongyang’s technical advances demonstrate the urgent need to ramp up implementation of U.N. sanctions on its nuclear and missile programs and its economic activities.

U.S. Ambassador Linda Thomas-Greenfield urged North Korea to stop its “reckless provocations” that violate Security Council sanctions resolutions. She said it should start talks with the Biden administration without preconditions toward the goal of complete denuclearization of the Korean peninsula.

She urged all countries to fully implement U.N. sanctions “so that we can prevent the DPRK from accessing the funds, the technology, the know-how it needs to further develop unlawful weapons of mass destruction and ballistic missile programs.”

Thomas-Greenfield reiterated to reporters before an emergency closed meeting of the council on North Korea’s latest missile tests that the United States has offered to meet officials from the Democratic People’s Republic of Korea -- the country’s official name -- “and we have made clear that we have no hostile intent toward the DPRK.”

In a separate statement, the three members of the European Union on the Security Council -- Ireland, France and Estonia -- said Monday’s reported test of a submarine-launched ballistic missile “forms part of a pattern of provocations by the DPRK” in recent weeks, including launches of short-range ballistic missiles, long-range cruise missiles, “and what it has claimed to be a hypersonic glider.”

They said the new submarine missile launch “underlines the continued enhancement of the nuclear and ballistic program of the DPRK, which stated the ambition to ultimately acquire sea-based nuclear capabilities.”

The EU council members urged North Korea to immediately end its “destabilizing actions and take concrete steps to abandon its ballistic missiles” and other weapons of mass destruction including its nuclear program “in a complete, verifiable and irreversible manner.”

Ireland, France and Estonia also urged North Korea to respond positively to the repeated offers by the U.S. and South Korea for dialogue saying “there is no other way to achieve peace, security and stability on the Korean peninsula.”

The 15-member Security Council heard a briefing on the latest missile tests from U.N. Assistant Secretary-General Mohamed Khaled Khiari, but did not issue a statement.

The council has imposed increasingly tough sanctions on North Korea severely restricting its imports and exports while demanding an end to its nuclear and ballistic missile activities. But North Korea has repeatedly flouted council resolutions and continues to launch increasingly sophisticated missiles, escalating tensions on the Korean peninsula and in the region.

Thomas-Greenfield said the Biden administration is committed to working with the international community to reduce tensions and maintain peace on the Korean peninsula. And the U.S. commitment to the defense of South Korea and Japan “is ironclad," she said.

She criticized the Security Council committee monitoring sanctions on North Korea, saying it “is not doing its job.”

The U.S. ambassador didn’t name any countries, but the panel of experts monitoring the implementation of sanctions has cited alleged violations by North Korea’s neighbors China and Russia.

A rare joint opinion article by the ambassadors of China and Russia has sharply assailed President Joe Biden's plans for a virtual summit of democratic countries -- from which they were pointedly excluded. Calling the US plan "an evident product of its Cold-War mentality," ambassadors Anatoly Antonov of Russia and Qin Gang of China said the December 9-10 event would "stoke up ideological confrontation and a rift in the world, creating new 'dividing lines.'" The summit is meant to fulfill a campaign pledge by Biden to advance the cause of global democracy at a time when autocratic governments have been on the rise. But when the State Department on Tuesday published a list of about 110 invited countries -- without including Russia or China -- their reaction was furious.
FOREIGN POLICY・1 DAY AGO
The Independent

EU urged not to forget Belarus as bloc prepares sanctions

Belarus opposition leader Sviatlana Tsikhanouskaya appealed Wednesday to the European Union not to forget the plight of ordinary citizens and political prisoners in the former Soviet country, as the EU prepares new sanctions to prevent a security crisis at its borders blamed on President Alexander Lukashenko Tsikhanouskaya told EU lawmakers that “882 of my fellow citizens have been recognized to be in prison for exercising basic political rights people in the rest of Europe take for granted.” She urged the 27-country bloc not to recognize Lukashenko or his government, and to boost support to ordinary citizens.“It is getting late....
POLITICS・6 DAYS AGO
milwaukeesun.com

Experts: China May Attempt to Use North Korea to Counter US

WASHINGTON - Experts believe Beijing may come to see North Korea as leverage for challenging Washington's position on multiple issues, including the U.S. goal to denuclearize the Korean Peninsula. 'In light of the great power competition, China sees North Korea as leverage more than ever,' said Yun Sun, director of...
FOREIGN POLICY・12 DAYS AGO
baltimorenews.net

Washington [US], November 18 (ANI/Sputnik): The United States, South Korea, and Japan stand firm in maintaining compliance with UN Security Council sanctions on North Korea for missile launches and are ready to consider new ones if Pyongyang fails to comply, US Deputy Secretary of State Wendy Sherman said on Wednesday.
MILITARY・12 DAYS AGO

US, EU Vow New Sanctions Against Belarus As Migrants Mass At Border

The European Union and the United States vowed Monday to press ahead with fresh sanctions against the regime of Belarus President Alexander Lukashenko, as migrants massed at the Polish border despite Minsk claiming it was trying to repatriate them. "Attention, attention: illegal border crossing is forbidden. You will face criminal...
FOREIGN POLICY・14 DAYS AGO
Newsweek

The Russian Defense Ministry said that the nations "expressed a shared interest in stepping up strategic military exercises and joint patrols."
MILITARY・6 DAYS AGO
Newsweek

There is never enough food in North Korea.
FOOD & DRINKS・1 DAY AGO

US lying about expulsion of Russian diplomats ambassador

The US is deliberately distorting the facts regarding the departure of 55 Russian diplomats in order to mislead the international community, Moscow's representative in Washington claimed on Monday. According to news agency Interfax, Anatoly Antonov slammed the US State Department as "cunning" and accused it of making statements that have...
FOREIGN POLICY・9 HOURS AGO
Seattle Times

She fled North Korea, but South Korea put her in prison

SEOUL, South Korea — Song Chun-son, a duck farmworker, endured 2½ years in a North Korean labor camp and was later coerced to work for its secret police, the Ministry of State Security. Then she defected to South Korea in 2018, trying to start a new life here. She studied to become a caretaker for nursing home patients while working part time as a waitress.
CHINA・21 HOURS AGO
Reuters

MOSCOW, Nov 28 (Reuters) - Russia's ambassador to the United States said that 27 more Russian diplomats and their families were expelled from the United States and would leave on Jan. 30. "Our diplomats are being expelled...A large group of my comrades, 27 people with families, will leave us on...
U.S. POLITICS・2 DAYS AGO
Fox News

The China-Russia military cooperation deal should only concern America for the fact that it’s making a mockery of the country, Ret. Lt. Gen. Keith Kellogg told "Sunday Morning Futures." Kellogg: Look, the agreement itself… this is kind of like normal procedure. This is the way it kind of goes forward...
MILITARY・2 DAYS AGO
Shore News Network

TAIPEI (Reuters) – China’s military carried out “combat readiness” patrols in the direction of the Taiwan Strait on Friday as a U.S. Congressional delegation made a surprise visit to Taipei, offering strong support to the Chinese-claimed, democratically governed island. The five members of the U.S. House of Representatives arrived in...
FOREIGN POLICY・4 DAYS AGO
AFP

US removes sanctions on Burundi

The US government Thursday removed sanctions placed on Burundi six years ago, crediting elections, a fall in violence, and reforms by President Evariste Ndayishimiye. The situation in Burundi "has been significantly altered by events of the past year, including the transfer of power following elections in 2020, significantly decreased violence, and President Ndayishimiye’s pursuit of reforms," Biden's executive order said.
WORLD・12 DAYS AGO
simpleflying.com

The EU Moves To Sanction Airlines Flying Into Belarus

The European Union is moving against airlines that maintain flights into Belarus after it launched a further round of sanctions targeting the Belarusian Government. EU countries are up in arms with some airlines as they continue to fly unauthorized EU-bound migrants from the Middle East to Belarus. “The issue is...
LIFESTYLE・14 DAYS AGO
evalleytimes.com

The countries of the European Union (EU) must accept the new sanctions against Belarus “in the coming days” Migration crisis triggered on the eastern frontiers of the campThe head of European diplomacy, Joseph Borel, said this Monday. According to the officer, The new set of sanctions includes a “significant number”...
FOREIGN POLICY・14 DAYS AGO
gpsworld.com

The Kremlin warned it could blow up 32 GPS satellites with its new anti-satellite technology, ASAT, which it tested Nov. 15 on a retired Soviet Tselina-D satellite, according to numerous news reports. Russia then claimed on state television that its new ASAT missiles could obliterate NATO satellites and “blind all...
WORLD・20 HOURS AGO
thedrive

The footage purportedly shows the pilot ejecting as the fighter jet nosedives off the end of the ski-jump takeoff ramp. While we can’t at this point confirm its authenticity, a video has emerged apparently showing the last moments of the British F-35B Lightning stealth jet that crashed while operating from the Royal Navy’s flagship, the aircraft carrier HMS Queen Elizabeth. The vessel was underway in the eastern Mediterranean earlier this month. The footage appears to be in line with previous unconfirmed reports that the pilot tried to abort the takeoff but ran out of deck and was forced to eject during the November 17 incident, which is still under investigation. You can read our original coverage of the accident here.
PUBLIC SAFETY・1 DAY AGO
The Guardian

Hours before the deadly attack on the US Capitol this year, Donald Trump made several calls from the White House to top lieutenants at the Willard hotel in Washington and talked about ways to stop the certification of Joe Biden’s election win from taking place on 6 January. The former...
PRESIDENTIAL ELECTION・13 HOURS AGO
OilPrice.com

Russia Warns The U.S. Not To Interfere With Nord Stream 2

The Russian Government has warned the US not to put further pressure on anyone over the certification of the $11bn Nord Stream 2 (NS2) gas pipeline. The newly completed 1,764km double pipeline is still awaiting clearance from German regulators before Russia can start exporting gas through it. NS2 bypasses Ukraine and instead imports Russian gas directly to Germany via the bed of the Baltic Sea. If green-lit, it will double Russia’s overall flows to Germany, providing 55bn cubic meters of gas through both pipelines.
U.S. POLITICS・1 DAY AGO