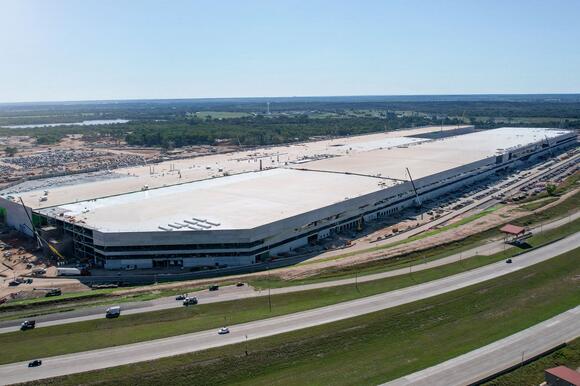 Tesla's third-quarter profits were released on Wednesday afternoon and current richest-man-on-earth Elon Musk topped the charts since his high-profile transition to Austin.

Q3 held record-high deliveries for the electric vehicle manufacturer, despite chip shortages and supply chain issues. Revenue came in slightly shy of expectations but still yielded the most profitable quarter thus far for Tesla. Plus, adjusted earnings per share are also on the rise.

"A variety of challenges, including semiconductor shortages, congestion at ports and rolling blackouts, have been impacting our ability to keep factories running at full speed," Tesla said in a statement. "We believe our supply chain, engineering and production teams have been dealing with these global challenges with ingenuity, agility and flexibility."

According to Tesla's update, the EV giant's Q3 revenue came in at $13.76 billion—a big year-over-year increase as Tesla recorded $8.77 billion in Q3 of 2020. The expectation was $13.9 billion and though the company came in just a few million lower, it was the company's ninth-straight profitable quarter.

Though earnings were a touch lower than expected, adjusted earnings per share came in at $1.86, where expected had been $1.67, and a year ago was 76 cents per share.

An accomplishment for Tesla this quarter was delivering more than 241,300 vehicles worldwide from its California factory—almost half of what the company delivered throughout all of 2020.

This Q3 update comes on the heels of Tesla's announcement that it would move its headquarters to the capital city. Additionally, the new Gigafactory in southeast Travis County is looking more complete by the day. While full-scale production isn't slated to start until 2022, the factory has already begun testing its robotic assembly line.

Should investors set shares of Tesla on autopilot in their portfolios, or is it time to pump the brakes?
STOCKS・10 HOURS AGO
Austonia

Tesla CEO Elon Musk talked the future of mankind, government spending and his companies from the new Tesla headquarters at Giga Texas in southeast Travis County for the Wall Street Journal's CEO Council this week.
AUSTIN, TX・3 HOURS AGO
Benzinga

Company relocations and expansions are driving record levels of job creation in Central Texas. Data compiled by Opportunity Austin, the economic development arm of the Greater Austin Chamber of Commerce, shows companies have promised to bring roughly 23,150 jobs across the metro, beating out the previous record of 22,114 jobs for all of 2020.
TEXAS STATE・2 DAYS AGO

Elon Musk continues to impress us with his innovative ideas that provide us with a glimpse into what the future might be like. Tesla brought self-driving EVs into existence and SpaceX is working toward making Mars inhabitable. Those companies alone drove Musk’s net worth to over $300 billion. Article continues...
BUSINESS・2 DAYS AGO
CNN

New York (CNN Business) — Tesla CEO Elon Musk sold a massive stake in his company over the past several weeks. And yet he owns 564,000 more shares than he did at the start of the selling spree. An analysis of his filings shows Musk is not backing away from...
STOCKS・3 DAYS AGO
bizjournals

Elon Musk's Tesla has formally shifted its headquarters to Austin from California, making it official in a recent SEC filing. That immediately shakes up the public company landscape in the Texas capital, though it remains to be seen exactly what it means for the region, from number of employees to economic impact.
BUSINESS・5 DAYS AGO
smarteranalyst.com

This article was originally published on TipRanks.com. It is official, Tesla (TSLA) is now headquartered in Austin, Texas. According to the New York Post, the Tesla HQ relocated from Palo Alto, California, to 13101 Harold Green Road, Austin, Texas on December 1, 2021. TSLA shares fell 0.95% to close at $1,084.6 on December 2.
AUSTIN, TX・5 DAYS AGO

It's official: Tesla is Texan now. The automaker revealed in a filing with the U.S. Securities and Exchange Commission that it has officially relocated its headquarters from Palo Alto, California—in the heart of Silicon Valley—to an area in Austin, Texas next to its all-new Gigafactory. The move should come as...
TEXAS STATE・5 DAYS AGO
Times Daily

AUSTIN, Texas (AP) — Tesla says it has officially moved its corporate headquarters from Silicon Valley to a large factory under construction outside of Austin, Texas. Support local journalism reporting on your community. * New Subscribers Only. * Digital Subscription Only. After the initial selected subscription period your subscription rate...
CALIFORNIA STATE・6 DAYS AGO
GreenwichTime

Elon Musk announced this week that Tesla will move its headquarters from Silicon Valley to Austin, Texas. His new factory is almost ready to start operations, where his next projects such as the Model Y and the Cybertruck will be built. “Our factory is five minutes from the airport, 15...
TEXAS STATE・6 DAYS AGO
12newsnow.com

AUSTIN, Texas — Telsa has officially moved its headquarters to Austin. The electric vehicle company filed an 8-K form on Wednesday with the U.S. Securities and Exchange Commission to relocate its corporate headquarters to the site of its Gigafactory at 13101 Harold Green Road in Austin. In October, Tesla CEO...
AUSTIN, TX・6 DAYS AGO

AUSTIN, Texas (AP) – Tesla says it has officially moved its corporate headquarters from Silicon Valley to a large factory under construction outside of Austin, Texas. The company made the announcement Wednesday in a filing with U.S. securities regulators. CEO Elon Musk had said at the company’s annual meeting in October that the move was coming. The filing said the relocation from Palo Alto, California, to what Tesla calls a “Gigafactory” on Harold Green Road near Austin was done on Wednesday. Tesla has about 71,000 employees worldwide, with about 10,000 at the Palo Alto headquarters. It wasn’t clear how many would be moving.
AUSTIN, TX・6 DAYS AGO
Carscoops

Tesla Officially Relocates HQ To Texas, Bringing Thousands Of Staff With It

Tesla has officially moved its headquarters to Austin, Texas from the former site in Silicon Valley. The car manufacturer first hinted at the move last year while chief executive Elon Musk was fighting with Californian officials about Covid-19 lockdowns that forced it to halt production at its Fremont factory. It confirmed that the move has been made to the Gigafactory under construction in Austin during a filing made with U.S. securities regulators.
TEXAS STATE・5 DAYS AGO
Daily Mail

Elon Musk officially owns no homes: Tesla CEO sells off lavish Silicon Valley estate for $30 million - $7.5M lower than its asking price - as he downsizes to $50K rental to fulfill his pledge made last year to 'own no home'

The world's second richest man has fulfilled his pledge to 'own no home.'. Tesla and SpaceX CEO Elon Musk has sold his Silicon Valley estate for $30 million on Thursday, $7.5 million less than the original $37.5 million asking price when it was first listed in June, according to records. He struggled to sell the home, listing it three times before finding a buyer.
REAL ESTATE・5 DAYS AGO
bizjournals

Just a few months after announcing plans to relocate, Elon Musk's electric car manufacturer Tesla Inc. has moved its headquarters from Palo Alto to Austin. Tesla (Nasdaq: TSLA) made the relocation official in a Dec. 1 filing with the U.S. Securities and Exchange Commission, which indicate corporate operations are now based at the same site as the company's $1.1 billion factory under construction in eastern Travis County. Musk divulged the relocation plans in October but did not give too many details, such as timing.
TEXAS STATE・6 DAYS AGO

Tesla says it has officially moved its corporate headquarters from Silicon Valley to a large factory under construction outside of Austin, Texas. The company made the announcement late Wednesday in a filing with U.S. securities regulators. CEO Elon Musk had said at the company’s annual meeting in October that the move was coming.
CALIFORNIA STATE・6 DAYS AGO
just-auto.com

Geely-owned Volvo Cars has reported interim financials for the third quarter 2021 which show a dip in revenue and profit as the sector-wide shortage of critical semiconductor components constrained sales. In the July-September period the company achieved revenues of SEK 60.8 billion, down 7 per cent compared with the same...
BUSINESS・8 DAYS AGO
Forbes

Regulatory credits have been a controversial topic for Tesla investors in the past. (see our updates below) These credit sales, which are almost pure profit, have been a key driver of Tesla’s margins over the years and the company largely relied on these credits to post operating profits in multiple quarters in 2019 and 2020. While credit sales have been quite volatile, there have been quarters where credit sales alone have topped $500 million, and have bolstered Tesla’s gross margins by as much as 6%. That said, with Tesla’s vehicle deliveries ramping up nicely and economies of scale kicking in, Tesla now appears to be solidly profitable even without credit sales. For perspective, for the first three quarters of 2021, we estimate that pre-tax profits would have stood at over $2.5 billion, excluding tax credits. This compares to 2020 when Tesla would have posted a pre-tax loss of over $400 million, excluding credits. See our analysis on How Do Regulatory Credits Impact Tesla’s Gross Margins? for a detailed look into Tesla’s regulatory credit sales and how they impact Tesla’s margins and profitability.
PERSONAL FINANCE・9 DAYS AGO
CleanTechnica

In an interview with CNBC’s Andrew Sorkin this past week, General Motors CEO Mary Barra shared some interesting alternative facts about Tesla and how much Tesla pays its employees. To be fair, she was asked some tough questions and Tesla isn’t her company. However, her claim that, as per her last look, “this was not the case,” was said in reference to Tesla’s employees making more than GM’s employees. She also insinuated that Tesla’s employees didn’t receive benefits such as health insurance with that answer — though, it’s hard to be completely certain what she was responding to. Elon Musk quickly debunked this in a reply to a tweet by Sawyer Merritt.
BUSINESS・8 DAYS AGO