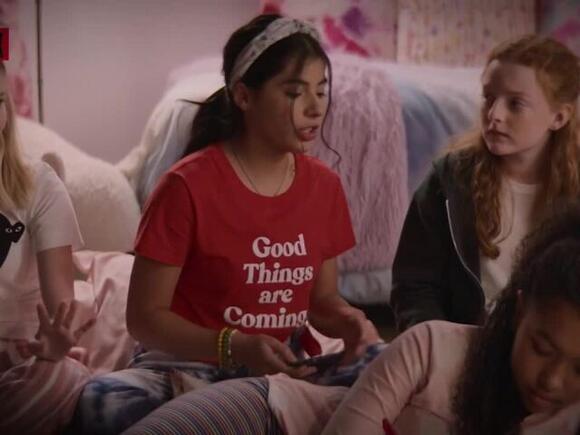 "The Baby-Sitters Club" is a beloved book series, which sold millions of copies, and follows a group of young women who start a babysitting business. Now, it's a hit award-winning show on Netflix.

The show's creator Rachel Shukert is from Omaha.

"I was really involved in that community, I feel like that was such a great foundation for working in television," Rachel said.

Rachel and her father Marty vividly remember her love of the stage and her love for words.

Rachel graduated from Central High School where she cultivated a love for acting and singing — but her father knew the arts would take her in a different direction.

"She was a great writer, and I really told her even when she was in high school, that I thought she would probably wind up making her living as a writer," Marty said.

That she did — becoming the show-runner of the award-winning "The Baby-Sitters Club."

"We wanted to put it in the present day so it didn't feel like this artifact. The 90s — that time — it could feel really relevant to kids watching it now and also feel nostalgic to an older audience that had been fans of the books or the original series," Rachel said.

The show is also garnering praise for its diverse cast.

"What was so great about the Babysitters Club is that every girl reading those books could see themselves in the characters and it was very important to me to kind of carry that through the present day," Rachel said.

The Shukerts say using your voice, leaning on your friends and being a kind person make up the core of this story.

"Her real specialty are really women's issues or women relating to each other but in very subtle and human ways and I think that relates to Rachel's friendships and the way that she is," Marty said.

Rachel hopes viewers can take this example from her work.

Season 2 is now streaming on Netflix.

The 2 big reasons ‘The Baby-Sitters Club’ endures, according to Netflix creator Rachel Shukert

A birthday present changed Rachel Shukert’s life. Shukert was eight years old when she got her first “The Baby-Sitters Club” book as a gift from a classmate. She remembers that it was “The Ghost at Dawn’s House,” the ninth installment in author Ann M. Martin’s wildly popular Scholastic children’s series about a diverse group of pre-teens and teenage friends who start a babysitting service in the fictional town of Stoneybrook, Connecticut.
LOS ANGELES, CA・13 DAYS AGO
enplugged.com

LUCIFER (L to R) LESLEY-ANN BRANDT as MAZE, TOM ELLIS as LUCIFER MORNINGSTAR, RACHAEL HARRIS as DR. LINDA and LAUREN GERMAN as CHLOE DECKER in episode 513 of LUCIFER Cr. COURTESY OF NETFLIX © 2021. Which new Netflix shows are you looking forward to watching the most in May 2021?...
TV SERIES・14 DAYS AGO
epicstream.com

2021 is almost over, but as the holidays are approaching, Netflix has started to reveal the movies and TV shows that will be released for the final weeks of this year. The streaming giant has shared the list of exciting titles, including highly-anticipated original movies and TV shows like The Witcher Season 2, the second part of Money Heist's final season, Cobra Kai Season 4, and Emily in Paris Season 2.
TV SERIES・13 DAYS AGO
CinemaBlend

2021 is almost at an end, and it’s closing out strong for many streaming services. As always, Netflix is bringing the heat and has some of its best programming of the year on deck and ready to prep us for 2022. What’s better, there’s stuff that’s entirely unrelated to the holiday season, just in case subscribers are reaching holiday burnout.
TV & VIDEOS・12 DAYS AGO

Despite all of the major production challenges in 2020 and early 2021, Netflix still had a phenomenal year, and it’s not over yet. There are some good Netflix shows on the way in late November and December 2021. As we head into the holiday season and the year's end, let's take a look back at some of the bingeworthy Netflix shows that dropped in 2021.
TV SERIES・12 DAYS AGO
Entertainment Weekly

"If it wasn't this, it would be Insecure," Oliver tells EW, explaining that "when there's another Black show, people either reduce it down to the same thing, as if two creators can't have totally different experiences, and points of views, and voices, or they try to pit you against them and make it competitive. And either version of that I'm so against."
TV SERIES・3 DAYS AGO
theplaylist.net

A little more than a year ago, it was announced that Jonathan Entwistle (producer and director of “The End of the F***ing World”) was working with Hasbro and eOne on a new reboot of the “Power Rangers” universe. At the time, it was said the deal would likely be for a feature film that would potentially lead to a new set of shows. Now that is official, and it appears Netflix is the lucky streamer landing all of the “Power Rangers” goodness.
TV SERIES・12 DAYS AGO
13 ON YOUR SIDE

MUSKEGON, Mich. — It's a dream come true for a local chef and culinary instructor. Chef Amanda Miller recently got to learn from one of the best in the world on a new reality show that's about to drop on Netflix, called "School of Chocolate". Miller is a chef instructor...
MICHIGAN STATE・12 DAYS AGO

Remembering what it was like to be a teenage girl who's completely unsure of yourself has never looked quite like this. In the Hulu Original PEN15, two 13-year-old best friends named Maya and Anna (played by show creators Maya Erskine and Anna Konkle, who were both 31 when production on the first season began) discover themselves and the world around them.
TV SERIES・6 DAYS AGO
/Film

Sons Of Anarchy Creator Is Making A Western For Netflix

Netflix can't stand to see Kurt Sutter go. In a deal with the streaming powerhouse, the "Sons of Anarchy" creator and one-time "The Shield" director has locked in on his next project, a series titled "The Abandons" that relocates the grit of "Sons" to the Old West. Teased by Deadline as a "potential hourlong" show, the series is the result of a long-running desire on Sutter's part to do a Western. In an interview with Deadline, he gives his pitch:
TV SERIES・6 DAYS AGO
dexerto.com

The mind behind hit Netflix show Squid Game, Hwang Dong-hyuk, has given Jimmy ‘MrBeast’ Donaldson his official seal of approval after the YouTuber recreated the viral thriller. On November 24, MrBeast finally unleashed his own rendition of Squid Game, the viral Korean thriller that took over the internet for weeks...
BEHIND VIRAL VIDEOS・3 DAYS AGO
fangirlish.com

Amazon Prime’s latest series Harlem is out now, and we can honestly say we loved everything about it. The series follows four black women as they navigate their careers, friendship, and love lives. As we have said time and time again, representation matters. Harlem does a wonderful job of showcasing what it means to be a black woman.
TV SERIES・2 DAYS AGO

Co-creater of "Chicago Party Aunt" Chris Witaske is returning to the Windy City next weekend to discuss his popular Chicago-based Netflix show. Witaske, Illinoisan and a long-time veteran of Chicago comedy, said in a Twitter post that he will be at the Chicago Comic and Entertainment Expo on Dec. 11 to "talk all things Chicago Party Aunt."
CHICAGO, IL・2 DAYS AGO
The Hollywood Reporter

One of Netflix’s most popular shows that I would never consider reviewing — because what would possibly be the point? — is The Movies That Made Us. As befits its status as a spin-off from The Toys That Made Us, The Movies That Made Us is fueled by populist nostalgia instead of cinematic rigor, intended to make you happy about things you (and everybody else) already loved rather than force any examination or introspection about the medium. Occupying the vast middle ground between The Movies That Made Us and an ultra-meticulous or ultra-intellectual cinematic essay like Thom Andersen’s Los Angeles Plays...
LOS ANGELES, CA・1 DAY AGO
IndieWire

[This post originally appeared as part of Recommendation Machine, IndieWire’s daily TV picks feature.] Where to Watch ‘Undone’: Amazon Prime Video It seems like one of the biggest hurdles in telling a story that plays with time and space isn’t the nightmare of logistics or coming up with the specific rules that make your version of a story work. It’s pinpointing the tiny details and phrases that take on some profound, mystical meaning when they get repeated over and over again. In “Undone,” one of those things is a set of keys. Tossed on a table, disappeared, grabbed from sight and reappearing again....
TV SERIES・1 DAY AGO
Insider

4 Netflix Shows That Will Be Perfect For A Lovely Weekend

To keep it current, we've included new releases, Netflix originals, and series we've just discovered. We've also included shows we can't stop promoting to our friends. There are lists of the finest TV series on Netflix, and then there is our list. Would other sites like Arcane, based on the computer game League of Legends, and Gwyneth Paltrow's Sex, Love & Goop be included? No way.
VIDEO GAMES・13 DAYS AGO