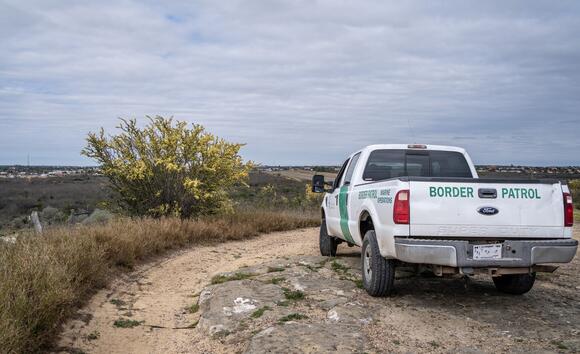 A Texas border city is spending tens of thousands of dollars annually to lobby the White House and Washington officials on immigration and border security.

The city of Laredo paid Akin, Gump, Strauss, Hauer & Feld, a prominent Washington firm, $50,000 during the third quarter of 2021 to lobby the Biden White House, agencies, and Congress for funding to address the fallout from the border crisis, according to a recent disclosure .

The filing details efforts to secure funding for transportation and housing, border and homeland security, immigration support, and health programs in next year’s appropriations legislation. The city is on track to match the $200,000 that it spent with the firm in 2020. In 2019, Laredo spent $30,000 quarterly before boosting its commitment the following year.

Cities along the southern U.S. border have faced a crush of migrants attempting to reach the country illegally, overwhelming public resources.

While President Joe Biden and other top administration officials have said migrants should not travel to the United States, the number of people attempting to cross the southern border illegally has risen sharply over the past 10 months. In September, some 30,000 Haitian migrants arrived in Del Rio, Texas, before being transported to Laredo and other cities.

Laredo city’s manager, Robert Eads, said essential services might need to be halted under the strain.

Eads did not respond to a request for comment by the time of publication.

In August, Laredo discovered a 40% coronavirus positivity rate among migrants who had been bused to the city from other stops along the border. It began refusing to take in migrants from elsewhere on the U.S.-Mexico border and busing migrants instead to larger cities in the state.

“That was very high,” Laredo Mayor Pete Saenz told the Washington Examiner's Anna Giaritelli in an interview at the time. The numbers were confirmed by Laredo's health authority, Dr. Victor Trevino.

The city has seen a spike in coronavirus cases beginning in December last year .

“Our health system cannot support those volumes,” city manager Eads said . “Even if a migrant themselves, God forbid, gets sick, it’s the same resource that we’re going to lack, so they may not get the services that they need.”

Rickhoff’s professional biography notes his experience counseling clients on federal agency decision-making, as well as “[a]cting on behalf of immigration interests before Congress and the administration.”

The Department of Homeland Security’s Customs and Border Protection agency this week announced that it would spend millions of dollars to rebuild asylum court facilities in Laredo and Brownsville, another border city, as it moves to restart a Trump-era asylum program , the Migrant Protection Protocols, sometimes called "Remain in Mexico."

I think these land owners such be able to take care of the problem!

They shouldn’t have to do this.Help should already be there

President Joe Biden’s decision to impose additional air travel restrictions on South Africa and seven other countries in response to a new COVID-19 strain is being contrasted with his response to similar policies under former President Donald Trump.
WASHINGTON, DC・3 HOURS AGO
WashingtonExaminer

A key program in controlling the US southern border’s immigration inflow will likely be restored by the Joe Biden administration next week. The hot button “Remain in Mexico” program, originally devised by the Donald Trump administration, will see asylum seekers have to wait in Mexico before the merits of their claims can be decided by immigration courts. The Axios website broke the story earlier today. Mexico has yet to sign off on reinstating the program, which could push back its implementation. The country had to endure many squalid refugee camps when the policy was originally in place, angering many Mexicans. The US program...
IMMIGRATION・2 DAYS AGO

The solution is simple. Send our troops into Mexico. After all, that country is giving free passage to overwhelm our borders. Why is Mexico allowing this? Mexico is showing complete disrespect of our sovereignty. Of course, Joe Biden is not showing that he cares about our border, only caring about future Democrats. And all our children will be paying for housing and feeding those migrants and all their offspring.
PRESIDENTIAL ELECTION・2 DAYS AGO
Business Insider

WATCH: A Florida representative was booed on the House Floor after calling Biden's spending bill 'Build Back Broke'

Why the Border Is Such a Problem for Biden -- and America

The Biden administration is drowning on issue after issue, and many of the bubbles are coming from the Rio Grande River. The problem, which dare not speak its name, is illegal immigration. The administration, its political party, and the mainstream media refuse to say the very word “illegal.” For a while, they called it “undocumented,” pretending the migrants somehow forgot their papers in the top dresser drawer in Guatemala or Haiti. Now, even that bland phrase is deemed too clear and honest. The new woke term is “irregular immigration.” Anything to minimize the problem, sway public opinion, and avoid plain talk.
PRESIDENTIAL ELECTION・4 DAYS AGO
Elkhart Truth

U.S. Sen. Mike Braun, R-Ind., is promising to vote against every upcoming federal spending measure — including funding for the U.S. military — if it does not include money to continue building a wall on the U.S.-Mexico border. The first-term Hoosier lawmaker claims Democratic President Joe Biden is making the...
CONGRESS & COURTS・8 DAYS AGO

exas Gov. Greg Abbott sent President Joe Biden a letter demanding U.S. officials shore up security on the Texas/Mexico border and to ask Mexico's president during Thursday's North American Leaders' Summit to remove federal forces from U.S. businesses south of the border. Immigration is slated to be among topics discussed. Other topics include: climate change, the coronavirus pandemic, and economic growth among the three nations, the first summit held since 2016.
IMMIGRATION・8 DAYS AGO
WTKR News 3

How are border towns dealing with migration?

While the White House has recently highlighted declining numbers of migrants at the southern border, nothing has changed the fact that 2021 has set records.
IMMIGRATION・9 DAYS AGO
dallassun.com

A long-time Texas congressman representing a district along the US-Mexico border said he has ?moved on? from Vice President Kamala Harris when it comes to illegal immigration and now wishes the US had a proper border czar. "I've moved on from the vice president to say, 'OK, let's work with...
TEXAS STATE・9 DAYS AGO
bizmagsb.com

Kennedy to Mayorkas: Is White House incompetent, or do they believe in open borders?

WASHINGTON – Sen. John Kennedy (R-La.) today questioned Department of Homeland Security (DHS) Secretary Alejandro Mayorkas on the Biden administration’s mishandling of the ongoing immigration crisis at the U.S.-Mexico border. Kennedy pressed Mayorkas on DHS’s releasing illegal immigrants who are COVID positive, who have criminal records or who have promptly...
CONGRESS & COURTS・10 DAYS AGO

White House press secretary Jen Psaki distanced President Joe Biden from past comments he made alluding to Kyle Rittenhouse, suggesting to reporters at Tuesday's briefing that when Biden compared Rittenhouse to white supremacists on the campaign trail, he was really denouncing former President Donald Trump.
KENOSHA, WI・3 DAYS AGO
Reuters

NANTUCKET, Mass, Nov 26 (Reuters) - U.S. President Joe Biden said on Friday his administration was not considering new vaccine mandates following the discovery of a new COVID-19 variant in South Africa, which led to travel bans from that country and seven other nations. "We don't know a lot about...
PRESIDENTIAL ELECTION・21 HOURS AGO
CNN

New York (CNN Business) — Nearly a dozen Congressional Democrats are urging President Joe Biden to combat high gas prices by not only releasing barrels from the US Strategic Petroleum Reserve but by banning US oil exports, according to a letter viewed by CNN. The letter sent Monday to Biden...
PRESIDENTIAL ELECTION・4 DAYS AGO

Donald Trump wants to be president again, but does his party want it too? Democrats are skeptical that Kamala Harris is suitable for the presidency – she has already been in office for an hour and a half. Most Americans may not have noticed that something historic happened last Friday:...
PRESIDENTIAL ELECTION・2 DAYS AGO
WashingtonExaminer

The polyp removed during President Joe Biden's first colonoscopy in office was identified as a "tubular adenoma" that requires no further action, according to the White House physician.
POTUS・2 DAYS AGO
Fortune

Biden said on the campaign trail he wanted to ‘revoke’ Section 230. So why did the DOJ just defend it?

Subscribe to Fortune Daily to get essential business stories straight to your inbox each morning. President Joe Biden made no secret of his dislike for Section 230 of the Communications Decency Act when he was campaigning for the White House. The policy, passed in 1996, shields internet platforms from liability...
PRESIDENTIAL ELECTION・2 DAYS AGO
Florida Phoenix

Quality Journalism for Critical Times WASHINGTON — Nearly 100 House Democrats are pushing the Senate to expand immigration protections in President Joe Biden’s massive social spending and climate bill, and advocates say that it may be a last opportunity for years to advance any reform. A letter to Senate Majority Leader Chuck Schumer of New York and the chairman of […] The post Immigration protections in Biden’s social policy bill face a new test in the Senate appeared first on Florida Phoenix.
FOREIGN POLICY・1 DAY AGO