Tua Tagovailoa could be headed to Washington Football Team 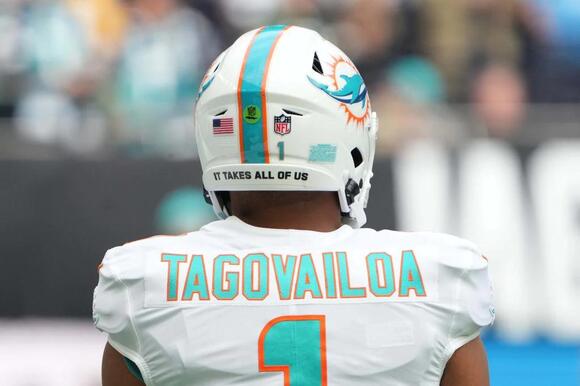 If the Miami Dolphins are to pull off a trade for Deshaun Watson , fellow quarterback Tua Tagovailoa would have to be moved.

With that said, reports around the NFL conclude that the Houston Texans wouldn’t want the current Dolphins starting quarterback in any move for Watson.

We’re now getting some more information on what a deal might look like. According to Texans beat writer Coty Davis , the Washington Football Team would acquire Tagovailoa in a three-team swap with Miami and Houston.

All of this comes amid suggestions that Miami is potentially nearing a deal to acquire Watson in a blockbuster trade. Separate reports indicate that other moving parts would be involved, lending credence to Davis’ own report.

While the former Alabama standout has struggled with both consistency and injuries since Miami made him a top-five pick back in 2020, he still boasts a tremendous amount of upside. Remember, we’re talking about a 23-year-old kid.

At the very least, Tua provides more of a look into the long-term than injured stopgap Ryan Fitzpatrick and current starter Taylor Heinicke . He’d definitely be an interesting fit in offensive coordinator Scott Turner’s system, which doesn’t necessarily require the strongest of arms. That’s magnified by the presences of stud young running back Antonio Gibson and wide receiver Terry McLaurin in the nation’s capital.

Related: Find out where Washington Football Team sits in our NFL power rankings

Any move to acquire Tua Tagovailoa would likely require Washington giving up an early-round pick and change. Through 13 career games (12 starts), Tua has tallied 18 total touchdowns against seven interceptions while completing 64.1% of his passes and boasting a 7-5 record.

As for Washington, the team sits at a disappointing 2-4 on the season. Its offense ranks in the bottom third of the NFL in scoring and bottom 10 in passing. Washington’s quarterbacks have combined for nine passing touchdowns against six interceptions.

where players go to die. Washington will never be anything they are a joke to the NFL. I've seen high-school games where more talent is on the field. Washington needs to do a solid and just dissolve.

There isn’t much of a quarterback controversy for the Miami Dolphins right now. That didn’t stop Brian Flores from declaring Tua Tagovailoa his starting quarterback on Monday afternoon. Flores announced on Monday that Tagovailoa will start against the New York Jets this Sunday. Tagovailoa has dealt with a number of...
NFL・12 DAYS AGO
fantasypros.com

Dolphins coach Brian Flores announced QB Tua Tagovailoa will start in Week 11 against the Jets. (Doug Kyed on Twitter) Tagovailoa entered Thursday's Week 10 game in relief of an injured Jacoby Brissett and impressed, completing 8-of-13 passes for 158 yards while scoring a rushing touchdown. This would seemingly indicate that his finger is fully healed.
NFL・12 DAYS AGO
The Phinsider

Dolphins fans won't have to wait until Sunday to find out whether or not QB1 Tua Tagovailoa will be the team's starting quarterback vs. the New York Jets, because unlike in previous weeks, head coach Brian Flores left nothing to the imagination. During today's press conference, which aired on the...
NFL・12 DAYS AGO
NBC Sports

Dolphins quarterback Tua Tagovailoa came off the bench to help the Dolphins beat the Ravens last Thursday and signs point to him being on the field at the start of their Week 11 matchup with the Jets. Tagovailoa did not start against the Ravens because of the left middle finger...
NFL・12 DAYS AGO

After coming on in relief of Jacoby Brissett last Thursday, Tua Tagovailoa helped lead the Miami Dolphins to an upset win over the Baltimore Ravens. Tagovailoa played despite a broken middle finger on this throwing hand, which prevented him from starting. Earlier today, Dolphins head coach Brian Flores said he expected the second-year quarterback to be ready for Sunday’s game against the New York Jets.
NFL・10 DAYS AGO
uticaphoenix.net

Tua Tagovailoa (finger) is no stranger to the injury report this season, and ahead of the Ravens-Dolphins Week 10 Thursday Night Football game, Tagovailoa is slated to be a game-time decision. The Dolphins’ signal-caller has already missed several games this season, so whether he’s playing is in real doubt. Tagovailoa isn’t an optimal play in single-QB leagues, but his status will certainly affect start ’em, sit ’em decisions in two-QB/superflex leagues, as well as lineup decisions on other players in the game. That’s why knowing the latest injury updates will be important.
NFL・12 DAYS AGO
AL.com

When Miami plays the New York Jets on Sunday, coach Brian Flores expects Tua Tagovailoa to take the first snap for the Dolphins despite the quarterback’s finger injury. “He’s going to have some discomfort with the finger,” Flores said on Monday about Tagovailoa’s return to the starting lineup. “He banged it the other day. We were trying to avoid that, but it happened. He’s had some time to rest it and practice today, and that’s my expectation for this weekend.”
NFL・12 DAYS AGO
On3.com

The Miami Dolphins will start quarterback Tua Tagovailoa on Sunday against the New York Jets, the team announced Monday. Tagovailoa, who had been sidelined while recovering from a fractured middle finger on his throwing hand, entered the Dolphins’ game last Thursday against the Baltimore Ravens to replace injured quarterback Jacoby Brissett and ended up impressing.
NFL・12 DAYS AGO

For two years, "Tank for Tua" was the mountaintop, and being in a position to select the superstar quarterback from Alabama in the 2020 NFL draft was more important than any win. Then the Miami Dolphins became the lucky winners of the Tua Tagovailoa sweepstakes. Fortunate enough to have Tagovailoa...
NFL・10 DAYS AGO
USA TODAY Sports Media Group

The Miami Dolphins held a walk-through on Thursday for their second day of practice this week, as they build towards the Week 11 matchup against the New York Jets. Because it was a walk-through, all participation levels were estimates for a normal practice. Brian Flores’ team received some good news...
NFL・9 DAYS AGO
NBC Sports

Dolphins quarterback Tua Tagovailoa had his first full practice since Oct. 29. The team upgraded him from a limited participant Wednesday. Tagovailoa fractured his left middle finger and missed two starts, though he finished up last week’s game after Jacoby Brissett was injured. Coach Brian Flores said earlier this week...
NFL・9 DAYS AGO
cbs12.com

Miami Gardens — MIAMI GARDENS — The mood around a football locker room changes a little bit when a seven-game losing streak turns into two wins in five days. For Miami Dolphins quarterback Tua Tagovailoa, it’s no different, even as he continues to work through swelling of his fractured middle finger on his throwing hand.
NFL・9 DAYS AGO

Tua Tagovailoa is throwing the football seemingly without any limitations. For the first time since fracturing the middle finger on his throwing hand three weeks ago in a loss to the Buffalo Bills, the Miami Dolphins’ second-year quarterback is working exclusively with the first-team offense, and he’s throwing the ball with some velocity.
NFL・8 DAYS AGO
FanSided

The Miami Dolphins were in “Tank for Tua” mode in the 2019 season in hopes they could draft former Alabama quarterback Tua Tagovailoa. Oddly enough, Miami did not fully tank, as they won some games and ended up with the No. 5 overall pick instead of No. 1 overall. Had...
NFL・8 DAYS AGO
AL.com

After the opening points on Sunday, the Miami Dolphins-New York Jets game was tied twice. Both times, Miami quarterback Tua Tagovailoa threw a touchdown pass to break the tie as the Dolphins posted a 24-17 victory. The former Alabama All-American completed 11-of-12 passes for 146 yards with two touchdowns and...
NFL・6 DAYS AGO
USA TODAY Sports Media Group

During the Dolphins’ Thursday night victory against the Baltimore Ravens, Tua Tagovailoa scored on a quarterback sneak to make it a two-score game with just over two minutes remaining. After getting into the end zone, he decided it would be a good time to celebrate with his interpretation of the popular “smeeze” dance.
NFL・8 DAYS AGO

MIAMI GARDENS, Fla. – The Miami Dolphins continue winning and they continue to show belief for quarterback Tua Tagovailoa. The Dolphins won their third straight game on Sunday by beating the Jets 24-17. Tagovailoa was sharp. He finished 27/33, for 273 yards, 2 touchdown passes and one interception. Tagovailoa was...
NFL・5 DAYS AGO
The Phinsider

The Miami Dolphins will likely be facing quarterback Joe Flacco on Sunday when they kickoff against the New York Jets it was reported early on Wednesday. Flacco will be the third different starter New York has had this season, with four quarterbacks, including Flacco, having already made appearances on the year. Rookie Zach Wilson has struggled in his assimilation to the NFL game while also dealing with a knee injury.
NFL・10 DAYS AGO
FanSided

Tua Tagovailoa had another good game on Sunday against the New York Jets but will it be enough to silence some of his doubters or just give them more fuel?. The Miami Dolphins kept their winning streak alive with a big win over their division rival the New York Jets on Sunday. The victory at MetLife stadium brought their winning streak to 3 in a row and helped many to shrug off the terrible 7 game losing streak that started the season.
NFL・6 DAYS AGO
Larry Brown Sports

Jets player not impressed with Tua Tagovailoa despite big game

Tua Tagovailoa had one of his best NFL performances on Sunday. That didn’t impress at least one opponent, though. New York Jets defensive end John Franklin-Myers characterized Tagovailoa’s performance in Miami’s 24-17 win as throwing up “prayers” that sometimes went answered. This doesn’t really check out. Tagovailoa went an efficient...
NFL・6 DAYS AGO