A man who complained his Tinder date served him a 'raw' steak has become the butt of his own joke after people pointed out that it's a 'perfect' medium-rare.

TikTok user @thewaterboy, who is believed to live in Florida, went viral for all the wrong reasons earlier this month when he shared a video mocking the homemade dinner, including a close-up of the steak in question.

'Tinder girl invited me over and gave me a raw steak,' he griped using the app's text to voice feature.

Scroll down for video

The woman who prepared the meal had her back turned and was opening a bottle of wine for them when he panned the camera to his plate.

The steak, which was brown on the outside and pink on the inside, was served with sides of asparagus, rice, beans.

When his date asked if he liked his meal, he replied, 'Yeah, it's good,' and then made a face at the camera.

'LMAOOO I give her another chance and she does THIS!! I’m done!' he captioned the video which has been viewed one million times.

The TikTok has more than 20,000 comments, many of which were from critics who called him out for knowing nothing about steak or cooking in general.

LMAOOO I give her another chance and she does THIS!! I¿m done! 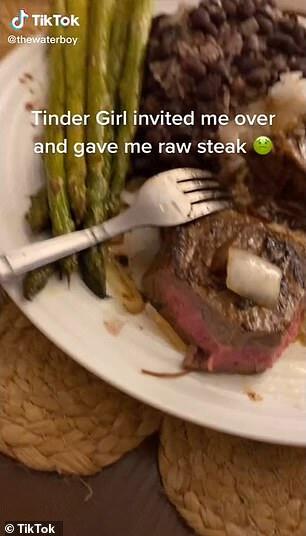 'I'm vegetarian and even I know that isn't raw. What a scrotum,' one person wrote, while another added: 'That steak is perfect. Can't trust a man who doesn't know what a real steak looks like.'

'That is medium rare, sir, the universally assume preferred way to serve a steak,' someone else responded. 'I bet you eat well-done steak with ketchup like a child.'

However, the man refused to admit he was wrong. Instead, he tried to get celebrity chef Gordon Ramsay on his side.

'@GordonRamsay PLEASE tell everyone in the comments that this is UNDERCOOKED!' he wrote. 'If you like undercooked steak that's fine! But don't like... "Perfect."'

'Imagine having so much confidence that Gordon's gonna be on his side,' one person commented.

'The fact that EVERYONE in the comments [keeps] telling this dude that that is indeed a well-cooked steak and he still believes it is raw,' someone else pointed out.

The TikToker has made fun of 'Tinder girl' for a number of other offenses in his previous videos, including the portable speaker she has in her car because the radio is broken.

He also took issue with her paying for dinner in change on their second date.

'I decided to go out with her again and she does this… YOU CAN'T MAKE THIS UP!' he captioned a video of her counting out her coins at the table.

'This is embarrassing for YOU not her,' one person hit back.

near impossible for me to get a date, if a woman cooked me one of my favorite meals, I would be so incredibly grateful I would not disrespect her like that at all! and that steak looks perfect! my mouth is watering looking at it 🤤 if I was riding with her and saw that situation, ask about it, offer to fix it, installing car stereos isn't rocket science! if she's paying with change, offer to pay instead 🤷🏻‍♀️ I'm sure she's feeling more embarrassed then you are! where's your wallet? can't afford to pay? then don't shame her! where's your car? don't have one? don't judge hers! don't like your steak? did you help cook it? no? then don't be a petty little boy about it

why was SHE driving and paying?? and cooking?? sounds like homie is broke as joke, no ride and no manners. the steak is the least of his worries. if he wants another date girl....RUUNNNNN!!!! Block that call

Hispanics like myself grow up eating well done but once you have medium done then medium rare its hard to go back to eating cardboard lol. This steak looks delicious to me.

Should you tip coffee shop staff? That’s the question that’s dividing TikTok this week. A video posted by TikToker @argunloll shows a man trying to press the “no tip” button on a frozen touchscreen while at the till. The on-screen text reads: “When he takes you for coffee but doesn’t...
BEHIND VIRAL VIDEOS・14 DAYS AGO
Food Beast

"Holy shit that's fuckin' whimsical." That's the initial reaction fellow Foodbeast Pete had when I presented him the above TikTok clip from @handmakelee_, showing the man with a piano that he created, which can somehow rove about while also grilling delicious meat skewers all at the same time. It's like those one-man-band side street acts meets a barbecue. Fun.
BEHIND VIRAL VIDEOS・13 DAYS AGO
Newsweek

After four years of service, a woman was given a very underwhelming selection of items as a leaving gift, and the internet is shocked.
INTERNET・5 HOURS AGO
Fox News

A Dairy Queen employee has revealed why it’s a bad idea to order too many toppings on a blizzard. TikTok user Michael Crespo-Alvarado posted a video last month showing how quickly a blizzard fills up if a customer requests too many toppings. The video, captioned "This is why you don’t...
BEHIND VIRAL VIDEOS・12 DAYS AGO

A video which shows earthworms inside a McDonald's soft drinks machine has disgusted many online.
BEHIND VIRAL VIDEOS・4 DAYS AGO
Indy100

A video showing customers bringing ice to a McDonald’s so staff could make them frappés has divided TikTok. The video shows a man buying ice from a car park ice cube vending machine as on-screen text reads: “McDonald’s didn’t have ice for a frappé so we got them some.”. The...
BEHIND VIRAL VIDEOS・20 DAYS AGO
The Independent

People are appalled by video of millennials trying Cracker Barrel for the first time: ‘This is blasphemy’

A group of millennial journalists have sparked outrage on social media after compiling a video of their less-than-impressed reactions to trying Cracker Barrel menu items for the first time.On Thursday, Insider’s food section posted a video to Twitter titled: “Millennials try Cracker Barrel for the first time,” in which the New York City-based journalists revealed that they would be travelling to New Jersey to try the Southern-style restaurant chain’s most popular dishes.In the clip, the millennials then shared their first impressions of some of Cracker Barrel’s staples, such as the chicken ‘n dumplins, country fried steak, loaded hash brown...
RESTAURANTS・19 DAYS AGO
Insider

A McDonald's employee said she prepared a 6,400-item order that came out to $7,000 in a viral TikTok

Brittani Curtis posted a viral TikTok video on November 10 showing a $7,000 order from McDonald's. Curtis said the order was placed by a local prison that regularly does business with the restaurant. According to Curtis, McDonald's staff only had four hours to prepare the meal. A McDonald's employee claimed...
BEHIND VIRAL VIDEOS・16 DAYS AGO

This Is The Most Popular Fried Chicken Chain In The US, According To New Report

Do you love fried chicken? We know we sure do. An exemplary fried chicken will feature juicy meat with a crispy, well-seasoned crust: Something we enjoy making at home when we have the time and space to deal with a bunch of hot oil, and something we'll order out when we don't. Luckily, when we want to eat fried chicken out, there are tons of restaurants and fast food spots where we can find tasty versions of the dish, ranging from upscale interpretations at sit-down restaurants like Jean-George Vongerichten's NYC spot Perry St. to of, course, old standby chains such as Popeyes, Chick-fil-A, and Church's (via Food & Wine).
FOOD & DRINKS・23 DAYS AGO
Sunderland Echo

McDonald’s has unveiled its Christmas menu and it includes two new burgers to get you in the festive spirit. The new menu items will be available from 17 November for around six weeks. What’s on the Festive Menu?. The fast-food chain is launching a new Festive Stack and Festive Crispy...
RESTAURANTS・20 DAYS AGO
cbs4indy.com

McDonald’s is turning back the clock by selling its iconic Egg McMuffin for its 1971 price later this week. Customers can get the breakfast sandwich for 63 cents during breakfast hours on Thursday (Nov. 18) at participating McDonald’s locations. You do have to order through the McDonald’s app to get...
RESTAURANTS・15 DAYS AGO
Indy100

A YouTuber has tragically died just five days after posting a video telling his followers he was not dead.Tor Eckhoff – better known as Apetor – was a 57-year-old YouTuber who lived in Sandefjord, Norway and was best known for his weird and wonderful travel videos, live streams and love for Norwegian vodka.Eckhoff reportedly died on Saturday after falling into an icy water while filming a video the previous day, according to a local news outlet.They reported that he was taken to a hospital via an air ambulance, but sadly could not be saved.Eckhoff had over 1.2 million subscribers on...
BEHIND VIRAL VIDEOS・1 DAY AGO

Khloé Kardashian is sharing how her personality traits have influenced her 3-year-old daughter, True. The reality star, 37, answered questions in an episode of The Ellen DeGeneres Show's "Mom Confessions," and revealed how her daughter is already following in her footsteps — even though she wishes she wouldn't in one particular case.
CELEBRITIES・21 HOURS AGO
EatThis

If there's one kind of story Americans love, it's a comeback story. And in this case, the comeback is one that follows loud complaints from disappointed customers. In the summer of 2020, Subway fans (and some blindsided franchise operators) were outraged when the company decided to cut two of its best-selling sandwiches from the menu. The Roast Beef and Rotisserie Chicken sandwiches were nixed and the move seemed permanent.
RESTAURANTS・24 DAYS AGO
Cosmopolitan

It looks like pop icon Ariana Grande had a raucously fun time on Thanksgiving with her family and guests. The musician shared a series of photos and videos of everyone enjoying the day, including a rare photo of her husband Dalton Gomez and their dog Toulouse. In the photo, Gomez...
CELEBRITIES・3 DAYS AGO
MarketWatch

The breakfast item was not only revolutionary for its time, but it still remains one of the best bites in fast-foodlandia.
RESTAURANTS・14 DAYS AGO
Thrillist

The holiday season is just around the corner, and there are several "food holidays" along the way. Tuesday, November 9, for example, is National Fried Chicken Sandwich Day, and Burger King is celebrating by treating customers like royalty with free food. Burger King customers can snag a free Ch'King Chicken...
RESTAURANTS・22 DAYS AGO
Mashed

The 2 Foods You Should Never Freeze, According To Andrew Zimmern - Exclusive

Andrew Zimmern is a big fan of freezing food. In fact, Zimmern, who hosted Travel Channel's "Bizarre Foods" for more than a dozen years, has been actively campaigning to get people to become "best friends" with their freezer, as part of his effort to reduce food waste. "People need to be cooking out of their freezer," Zimmern said in an exclusive interview with Mashed. "What we have to do is utilize the things inside of our freezer. That's number one, and use it as the friend that it was meant to be. Freezers are our friends."
FOOD & DRINKS・20 DAYS AGO
Insider

I ordered the same meal from Subway and Potbelly Sandwich Shop, and one sandwich was larger with way more sauce

An Insider reporter tried double cheeseburgers from eight fast-food chains and thought In-N-Out had the most delicious burger for the best price.
RESTAURANTS・29 DAYS AGO