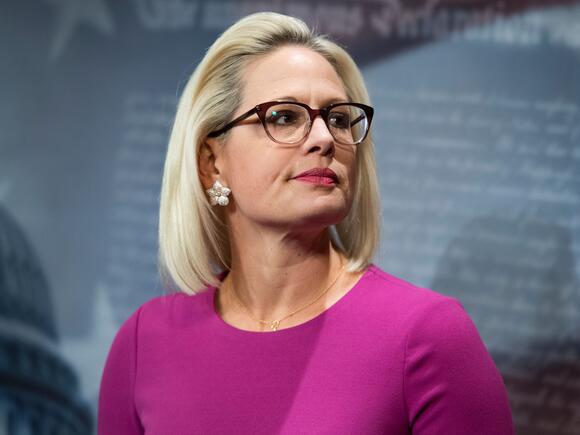 Opposition from Sen. Kyrsten Sinema of Arizona to lifting tax rates on individuals and large businesses is derailing Democrats' plans to roll back President Donald Trump's tax law, setting off a last-ditch effort to seek alternatives that can lock in the centrist Democrat's support.

A Senate Democratic aide familiar with the discussions told Insider that other options were still on the table, including stepping up IRS tax enforcement and tightening international tax rules. The Wall Street Journal first reported the story .

Insider reported last week that Sinema was opposed to bumping up tax rates on large firms and wealthy individuals , dealing a major setback to a centerpiece of the Democratic agenda: rolling back the 2017 GOP tax law.

Democrats argued for years that the law provided outsized financial benefits for the rich and helped accelerate inequality. Sinema's opposition to both individual and corporate rate increases strips over $700 billion in new revenue for their nascent safety net plan.

Still, that leaves the party with few alternatives that can garner support from every Senate Democrat as they try to mold Biden's economic plans into law over staunch Republican opposition. They have three votes to spare in the House and none in the Senate.

Some Democrats are starting to express frustration with the tumultuous negotiations on the safety net bill. "We didn't have a new tax plan every half hour," Rep. Richard Neal of Massachusetts, chair of the House Ways and Means Committee, told reporters on Wednesday. "We laid out a plan that was fully paid for, and we set our priorities."

Sen. Ron Wyden of Oregon, chair of the tax-writing Senate Finance Committee, has said for weeks that Democrats can draw from an extensive menu of revenue-raisers to pay for their ambitious plans to expand healthcare and education, as well as mitigating the climate emergency.

Wyden's proposals include what he calls a billionaires' income tax, modeled on an earlier proposal he unveiled in 2019 to tax the accumulated wealth of the richest Americans. The plan hasn't been released yet and it's unclear how much revenue it could raise. Other possible alternatives include levies on large firms that issue stock buybacks to shareholders.

Why would they roll back the tax cuts when federal tax revenues are up 22% since they were put in place, in spite of the pandemic, business closures and high unemployment?

In this daily series, Newsweek explores the steps that led to the January 6 Capitol Riot. On December 1, the dam finally broke. Attorney General William Barr invited Associated Press reporter Mike Balsamo to lunch, telling him on the record that he was breaking with President Donald Trump. "Disputing President...
PRESIDENTIAL ELECTION・1 DAY AGO
POLITICO

Trump intervenes in Ohio Senate primary — for himself

The former president was upset about ads in the race featuring anti-Trump comments a candidate made in 2016.
OHIO STATE・11 HOURS AGO
Business Insider

Jena Griswold told The Washington Post that there was a concerted campaign to place Trump allies in roles overseeing elections.
COLORADO STATE・2 DAYS AGO
MarketWatch

Will President Joe Biden's $2 trillion social-spending and climate package actually get the Senate's OK this month, as that chamber's leader has promised? Two analysts from opposite ends of the political spectrum say that looks likely.
PRESIDENTIAL ELECTION・3 HOURS AGO

The former president has suggested such an event would be a "ratings bonanza for television," as he blasted the media for "trying to demean the real results."
PRESIDENTIAL ELECTION・1 DAY AGO
Business Insider

Insider asked Republicans poised to take charge what they'd do if American voters decide to put them back in the majority in Congress.
U.S. POLITICS・1 DAY AGO
Pittsburgh Post-Gazette

For the first five years, the single most expensive item in the House version of the Democrats’ “Build Back Better,” or “human” infrastructure, bill is a gigantic tax cut for millionaires and billionaires. This provision would lift the cap from $10,000 to $80,000 on income tax deductions for state and local taxes (commonly referred to among budget nerds as “SALT”).
INCOME TAX・16 HOURS AGO
Business Insider

A rift has opened between McConnell and some Republican senators who have pushed vaccine misinformation and opposed mandates.
PRESIDENTIAL ELECTION・8 HOURS AGO

White House press secretary Jen Psaki lit into congressional Republicans threatening a government shutdown over vaccine mandates, saying they advocate for those who would "infect their coworkers, our children, filling hospitals" with COVID-19 patients.
CONGRESS & COURTS・1 DAY AGO
Markets Insider

Democrats want to raise the debt ceiling, avoid a government shutdown, and pass Biden's agenda all before Christmas. The GOP has other plans.
CONGRESS & COURTS・2 DAYS AGO
InsideClimate News

With the Senate turning its attention to President Joe Biden’s climate and social policy bill in the coming weeks, lawmakers are poised to expand a key tax credit that energy industry lobbyists and some experts say could unleash an important climate tool. But the legislation, which includes changes to a...
CONGRESS & COURTS・1 DAY AGO
TIME

This article is part of the The DC Brief, TIME’s politics newsletter. Sign up here to get stories like this sent to your inbox every weekday. Welcome to Washington, currently home to an octogenarian staring contest that will determine whether the military will stand ready, inspectors will check the food heading to holiday tables and families shuffle through busy airports with TSA screeners working with pay—or not.
CONGRESS & COURTS・1 DAY AGO

Lawmakers have reached agreement on a stopgap spending bill to keep the federal government running through mid-February amid threats of a shutdown.
LOS ANGELES, CA・7 HOURS AGO
WashingtonExaminer

Welcome back to 10 Things in Politics. Sign up here to receive this newsletter. Plus, download Insider's app for news on the go — click here for iOS and here for Android. Send tips to bgriffiths@insider.com. Here's what we're talking about:. 1. AT THE SUPREME COURT: Justices appear ready to...
CONGRESS & COURTS・10 HOURS AGO
The Independent

Vulnerable Democrats from Nevada to New Hampshire are promising to make abortion a centerpiece of their political strategy heading into the midterm elections, betting that an intense focus on the divisive issue can rally their voters to beat back a red wave and preserve their narrow majorities in Congress.Strategists in both parties suggest it may not be so easy.Democrats have been sounding the alarm on abortion rights in nearly every election cycle this century, including last month's stunning defeat in the Virginia governor's race. In most cases, it's Republicans who have shown to be more motivated by the issue.Still,...
PRESIDENTIAL ELECTION・1 HOUR AGO

A growing chorus of conservatives is demanding that Senate Republicans shut down the government if President Joe Biden refuses to scrap the federal coronavirus vaccine mandate.
CONGRESS & COURTS・2 DAYS AGO
MarketWatch

President Joe Biden may have avoided a partisan showdown in the Senate by re-nominating Jerome Powell lead the Federal Reserve, but Republicans on Capitol Hill aren't giving him the benefit of the doubt when it comes to the three additional nominations he's expected to make in the coming weeks.
WARREN, OH・2 DAYS AGO
GoDanRiver.com

Salena Zito: Wake up, progressives: You're lucky to have Kyrsten Sinema

Brian Murray knows just how fierce an opponent Arizona’s Sen. Kyrsten Sinema can be. The Republican strategist saw his candidate lose to Democrat Sinema in their 2012 race for the House. Calling the experience “unpleasant,” Murray admits his candidate, Vernon Parker, was flawed, but “flawed candidates win all of the...
CONGRESS & COURTS・1 DAY AGO