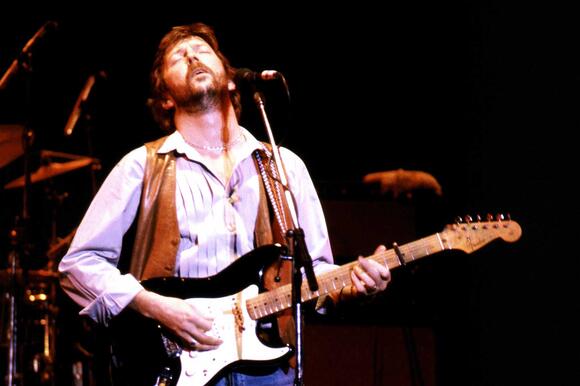 In the new episode of Rolling Stone Music Now , senior writer David Browne discusses his recent blockbuster feature on Eric Clapton , which delved into the rock icon’s embrace of COVID-19 vaccine skepticism and his anti-immigration onstage rant in the Seventies — which was, by Clapton’s own description, “full-tilt racist.”

Plus, we play audio from Browne’s interview with Dave Wakeling, the English Beat’s guitarist and singer, who gives an in-depth account of his experience of hearing Clapton’s stage rants at a Birmingham concert in 1976. “We all have uncles that go Archie Bunker on us,” says Wakeling. “You just try and remember the good times.”

To hear the entire episode, press play above, or download and subscribe on Apple Podcasts or Spotify .

Wow, so Clapton decides he's against forced vaccination, and now Rolling Stone is doing what they can to cancel the rock legend. It's so sad when the media decides to pursue cancel culture.

The past is the past, if you dig enough everyone has things in their past that their not proud of, and would rather forget! People change as they get older. they evolve, they sometimes become better people, to bad you don't!

A long time ago but should be surprised he's a white man they were taught racist ways from birth, but he doesn't hate that much because he copied every lick he knows from black blues artists.

Eric Clapton teamed up with anti-vaxxer Robert F. Kennedy Jr. to bemoan Covid-19 mandates and Rolling Stone’s scathing articles about him in his first interview in a while — outside of statements posted to Telegram. Posted last week on Kennedy’s The Defender site, the interview features Clapton talking about how the last few years have been a “buzzsaw” for him, both from a commercial standpoint as well as personally. “Over the last year, there’s been a lot of disappearing, a lot of dust around with people moving away quite quickly, and it does kind of refine the kind of friendships I have,”...
MUSIC・11 DAYS AGO
Rolling Stone

The Private Life of George Harrison

The skinny boy with the thick dark hair sat in the back row of a full classroom, head down, intense brown eyes fixed on his notebook. As his teacher lectured, the boy scribbled with his pencil, as if taking down every word. But George Harrison wasn’t listening. The 13-year-old son of a bus driver drifted into visions of his future, filling his notebooks with obsessive drawings of guitars — the instrument he’d been longing to play since he’d heard Elvis Presley’s hits, the sonic embodiment of all the fun and joy missing from dreary postwar Liverpool. Soon enough, he was filling his notebooks with lyrics and chord charts, and maybe an occasional sketch of a motorcycle.
CELEBRITIES・1 DAY AGO
Rolling Stone

70 Greatest Music Documentaries of All Time

Burning guitars, big suits, meeting the Beatles — the concert films, rockumentaries and artist portraits that stand head and shoulders above the rest. The movies have always loved giving actors the chance to play rock star or impersonate an iconic musician/singer, recreating those famous “Eureka!” studio moments and greatest-hits shows for any number of music biopics. When it comes to historical musical moments, however, there’s nothing like seeing the real thing. A number of documentarians saw the advantage of capturing a number of legendary artists and bands in their heyday and/or once-in-a-lifetime performances — partially for posterity, partially for plain old reportage and partially for the second-hand high of it all. And thanks to new access to archives and updated technology, a whole generation of filmmakers have come up learning the art of docu-portraits and genre breakdowns that run the gamut from sub-subgenres to broad stem-to-stern histories of rock, jazz and country-and-western. It’s never been easier to make a music documentary these days. Not all of them, of course, are created equal.
MOVIES・4 DAYS AGO
Showbiz411

Eric Clapton Is Lost to Us For Good, Throws in with Anti-Vaxxer Robert Kennedy Jr., Family Objects

The Eric Clapton we loved, whose new album is as good as anything he’s ever done, is dead to us, basically. Clapton has doubled down on his anti-vaccine madness and thrown in with Robert K. Kennedy, Jr. Kennedy, a misery to his family– they’ve all criticized him– maintains a loud anti-vaccine campaign himself.
CELEBRITIES・11 DAYS AGO

Eric Clapton doubles down on his anti-vaxxer stance in a podcast appearance, while blaming a bad Rolling Stone review for the demise of legendary late-60s rockers Cream. It seems a quiet and dignified retirement isn't on the cards for Eric Clapton, as the guitarist recently appeared on The Defender, a podcast hosted by vocal anti-vaccine campaigner Robert F. Kennedy, Jr. (Yes, he is a relation.)
MUSIC・10 DAYS AGO
940wfaw.com

NEW YORK (Reuters) - Over 900 items from some of the world’s biggest music stars including Eric Clapton, Elvis Presley, Madonna and Michael Jackson are hitting the auction block in New York this week. The top lot is an acoustic guitar here Clapton owned and played on stage during a...
NEW YORK CITY, NY・14 DAYS AGO
myq105.com

Eric Clapton has been no stranger to headlines lately due to his stances against various coronavirus pandemic measures, from lockdowns to vaccine mandates. However, he seems to have taken issue with the media reaction to, and coverage of, his controversial stances. Clapton recently chatted with noted anti-vaxxer Robert F. Kennedy,...
CELEBRITIES・10 DAYS AGO

Eric Clapton accused Rolling Stone of running a “slur campaign” against him because of his controversial views on COVID-19 vaccination and lockdown mandates. The guitarist spoke to prominent anti-vax advocate Robert F. Kennedy Jr. for an interview featured on his website, the Defender. “Over the past year, there’s been a lot of disappearing, you know — little dust around with people moving away quite quickly,” Clapton said. “And it has, for me, refined the kind of friendships I have.” He added that the “mainstream media turning” on him has made the last few years especially difficult.
MUSIC・11 DAYS AGO
thebrag.com

Eric Clapton’s son Conor Clapton tragically died in 1991 after accidentally falling out of the window of a 53rd-floor apartment in New York City. The harrowing incident was the inspiration behind Clapton’s popular song, ‘Tears in Heaven‘ and also caused the singer to isolate himself from the rest of the world while he processed the heartbreaking tragedy.
NEW YORK CITY, NY・8 DAYS AGO
MinnPost

Taylor Swift’s Red rerelease proves what fans always knew, Slate. As a wannabe-hipster in high school, I always felt like I was “too good” for Taylor Swift’s music, like my life was more original than all the other girls around me who were obsessed with her catchy country-pop tunes. Now, over a decade later, I realize that in my youth I was missing the point that so many others had always understood: Swift has the innate ability to capture the emotional detail of her relationships and her life in such specificity that, incredibly, millions of people can relate. Last week, Swift re-released one of her old albums, “Red,” labeled “Taylor’s Version,” in which she added more depth to the music nearly a decade after its original release and took back her masters in the latest comeback in a public battle over her original work.
MUSIC・13 DAYS AGO
arcamax.com

Eric Clapton has lost friends and music pals due to his anti-vaccine stance. The 76-year-old guitar legend is anti-lockdown and had pledged not to perform at gigs where proof of immunisation against coronavirus is required to attend, despite being double-jabbed. And his controversial views on the pandemic and teaming up...
MUSIC・8 DAYS AGO

Eric Clapton shocked thousands of people during the pandemic when he sided with Van Morrison and agreed with his anti-lockdown stance. The guitar legend even collaborated with Morrison on a song titled “Stand and Deliver”. Morrison had always been vocal about disagreeing with how the government dealt with Covid-19. In...
MUSIC・14 DAYS AGO
929thelake.com

35 Years Ago: Eric Clapton Begins Backing Away From the ’80s on ‘August’

Eric Clapton’s 1968 Martin D-45 has sold at auction for $625,000, making it one of the most expensive acoustic guitars of all time, though still falling someway short of the $6 million world record set by Kurt Cobain’s 1959 Martin D-18E MT as played during Nirvana’s MTV Unplugged set. Slowhand’s...
ENTERTAINMENT・6 DAYS AGO
BBC

A guitar given by Eric Clapton to Welsh musician Dave Edmunds has sold at auction for $625,000 [almost £470,000]. The guitarist gave it to Cardiff-born Edmunds when he visited the Cream legend at his Surrey home in 1976. The acoustic 1968 Martin D-45 was played by Clapton during Derek and...
MUSIC・2 DAYS AGO
American Songwriter

Review: Eric Clapton’s ‘The Lady in the Balcony: Lockdown Sessions’

The Lady in the Balcony: Lockdown Sessions | Mercury Studios | 3 out of 5 Stars. No current discussion about Eric Clapton can keep from stumbling over the obvious elephant in the room. It comes in the aftermath of the uproar about the guitar great’s anti-vaxxing commentary. That’s not to say Clapton didn’t understand the seriousness surrounding COVID and the pandemic that followed. It forced him to cancel his annual appearance at London’s Festival Hall, creating the impetus to record the all-too-familiar material he would have performed and assemble another modified collection of his greatest hits.
MUSIC・3 DAYS AGO
Rolling Stone

Robert Plant is highly amused by Paul McCartney’s dubbing the Rolling Stones “a blues cover band,” perhaps in part because his own old band faced similar criticism. “I don’t think there’s any fighting,” he says in the new episode of Rolling Stone Music Now. “They’ve known each other since 1963. They love each other desperately.” Still, if there’s any animus, he knows how to resolve it: McCartney, he says, “should just play bass with the Stones.” The singer was joined on this episode by Alison Krauss, who just recorded the excellent new album Raising the Roof with him. Here are some highlights. To...
MUSIC・5 DAYS AGO
Rolling Stone

Dave Grohl and Greg Kurstin have reteamed for another year of “Hanukkah Sessions,” an eight-night series they launched last year, which features the Foo Fighters’ frontman and the producer releasing a new cover of a song by a Jewish artist for each night of the Festival of Lights. “Once upon a time, two nice Jewish boys from Queens named Jeffery Hyman and Thomas Erdelyi changed the world forever with their music….. as Joey and Tommy Ramone! GABBAI GABBAI HEY!,” Grohl and Kurstin captioned the clip for Night Two of the sessions. “Ladies and gentlemen….It’s the Ramones! Blitzkrieg Bop!” In the song’s accompanying video, the duo performed a straightforward rendition of the punk classic, except for a lyric change to the song’s rallying chant, where they sing, “Hey oy! Let’s goy!” For the first night of this year’s installment, the duo gave Lisa Loeb’s “Stay (I Missed You)” a dramatic, metal spin. Earlier this month, Foo Fighters dropped their video for “Love Dies Young” featuring Jason Sudeikis.
MUSIC・9 HOURS AGO