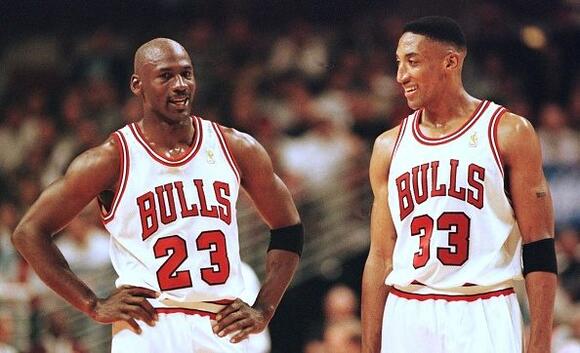 NEW YORK – Twenty-five years ago, both players were named to the league’s 50th Anniversary team as they were in the midst of the Bulls’ dynasty.

So it’s not a surprise that when the NBA decided to create a list of the 75 best players in history to celebrate their latest anniversary, Michael Jordan and Scottie Pippen would once again be on that list.

On Wednesday, both Chicago Bulls Hall of Famers were named to the league’s 75th Anniversary team, doing so on the second day of announcements. The first 25 players were announced on Tuesday with 25 more on Wednesday and the final 25 on Thursday.

Jordan and Pippen were both selections to the NBA’s 50th Anniversary team in 1997 at All-Star Weekend, just before the team won their fifth of six championships that summer.

Considered by many to be the greatest player in the history of professional basketball, Jordan would continue with the Bulls through 1998 then returned to the NBA with the Wizards for two seasons from 2001-2003. He then retired after winning six championships, five regular season Most Valuable Player Awards, and six Finals MVPs while being named to 14 All-Star Games.

Jordan was inducted into the Basketball Hall of Fame in 2009.

Pippen would leave the Bulls in 1998 with Jordan and played for the Rockets and the Trail Blazers before returning to Chicago for his final season in 2003-2004. The seven-time All-Star and six-time NBA champion was inducted into the Basketball Hall of Fame in 2010.

CHICAGO – There’s no telling what may transpire over the course of the next few months as a new-look Bulls’ team continues to find its way through the 2021-2022 season. But what the team pulled off shorthanded on Monday night may end up making it one of the more memorable victories of the campaign. With […]
NBA・19 HOURS AGO
WGN News

CHICAGO – When the Bulls decided that it was best to sign proven, veteran players to return to relevancy, they’d hoped that one of their biggest acquisitions would to his All-Star form. So far that has happened, and his efforts this past week helped the Bulls to three-straight wins along with Eastern Conference Player of […]
NBA・1 DAY AGO
fadeawayworld.net

Dennis Rodman was a key figure for two different elite teams in the 90s. He won two championships with the Detroit Pistons, where he made his name as a top-tier defender who brought it every night. That reputation eventually landed him with the Chicago Bulls, where he won 3 more championships, bringing his total to 5.
NBA・18 DAYS AGO
firstsportz.com

It wouldn’t be wrong to say that Warriors Stephen Curry is cruising through the season-high on record waves, and each time it gets higher and higher. Just recently Stephen Curry topped the list of the Most 3 pointers ever made in the NBA surpassing Ray Allen, and now this. Friday’s match-up against the Portland Trail Blazers gave Curry a shot at surpassing the history, and the man delivered it in style.
NBA・11 DAYS AGO

When you look back at some of the most dominant players in the league, we have been blessed to watch some of the greats. Michael Jordan, Kobe Bryant, and LeBron James deserve a tier of their own when it comes to greatness. However, that same tier would feature a heavy group of all-time greats as well.
NBA・13 DAYS AGO
Mashed

Scottie Pippen, who is best known as a legendary six-time NBA championship winner and member of the Chicago Bulls (via Bleacher Report), is adding a new title to his already stacked resume: Tea maker. Pippen, who released a line of gourmet popcorn this summer, is also part owner of Digits,...
NBA・6 DAYS AGO
Triangle Business Journal

Michael Jordan is said to be expanding his investment portfolio once again, this time teaming up with other high-profile figures around the NBA.
NBA・14 DAYS AGO
firstsportz.com

Back in 2011, LeBron James invested for the first time in the world of soccer and bought himself 2% stakes in the Liverpool FC. That investment was around $6.5 million and has now grown to approximately $32 million and more multiplying itself to five times and coming up as a better investment for LeBron James.
NBA・7 DAYS AGO

The handcrafted blend will be released on December 5th, Repeal Day, just in time for holiday gifting and sipping. Portland, Oregon (November 30, 2021) — Smith Teamaker, the premium craft tea company known for collaborations with top chefs and tastemakers, is set to launch one of its most delicious and high profile projects yet: Blend No. 33, DIGITS Bourbon Barrel Aged Black Tea, an all-star partnership with one the best players in NBA history, ex-Chicago Bull (and avid tea drinker) Scottie Pippen. The result is a remarkable barrel aged tea made in Bourbon barrels with Scottie Pippen’s own DIGITS Bourbon brand. The tea will be released online at SmithTea.com on December 5th, Repeal Day. DIGITS Bourbon Barrel Aged Tea ($34.99) is a complex blend, with three black teas aged for five months in charred oak bourbon whiskey barrels, after which the tea is blended with coconut, cinnamon and vanilla. Using full-leaf black teas Assam, Ceylon and Keemun (“the whiskey of teas”), the final combination evokes a deeply flavorful elixir for winter sipping on its own, or with a shot of bourbon or mixed into a hot toddy.
NBA・7 DAYS AGO
USA TODAY Sports Media Group

Here’s your daily recap of movements in the all-time lists for scoring, rebounds, assists, blocks, steals and three-pointers after yesterday’s games. Moved ahead of Scottie Pippen with 6,142 assists. He’s now 96 away from Jerry West. CJ McCollum No. 62 in three-pointers now. Moved ahead of Clifford Robinson and Stephen...
NBA・7 DAYS AGO
Sportsnaut

At 18-2 to start the season, the Golden State Warriors and their sharpshooting leader Stephen Curry look well on their way to retaking their mantle atop the Western Conference. Former Chicago Bulls forward and Hall of Famer Scottie Pippen said the current Warriors squad reminds him of his legendary Bulls squad heading into their first three-peat run.
NBA・8 DAYS AGO

Kevin Durant and the Brooklyn Nets lost to the the Chicago Bulls on Saturday night.
NBA・2 DAYS AGO
fadeawayworld.net

Scottie Pippen Regrets Not Reaching Out To Michael Jordan When His Father Passed Away: "Having Lost My Own Dad Three Years Before, I Might Have Been Able To Offer Michael Some Comfort."

Charles Oakley On How Michael Jordan Reacted To Scottie Pippen Calling Him Out: "Mike's Not Going To Feud In The Press About What Scottie Has To Say; He's Not Going To Comment On It."

The relationship between Michael Jordan and Scottie Pippen has fallen apart greatly. Last month, Scottie Pippen's memoir came out, and it had a lot of negative comments towards Michael Jordan, mostly over how Pippen was treated by MJ and 'was used' to help his image during the airing of 'The Last Dance' docuseries.
NBA・5 DAYS AGO

The Chicago Bulls have defeated the New York Knicks and Brooklyn Nets in their last two games.
NBA・2 DAYS AGO
ClutchPoints

Stephen Curry, man. What else is there to say? The Golden State Warriors superstar has been on an absolute tear to start the season, scoring at an inhuman level similar to his unanimous MVP season. He has catapulted himself back on top of the league with his play, as he looks to lead his team back to the Finals.
NBA・11 DAYS AGO
fadeawayworld.net

Scottie Pippen is making headlines right now thanks to his constant criticism aimed at former teammate Michael Jordan, but many fans still want to know more about Pippen's personal life and his marriage with Larsa Pippen. In the past, the couple was involved in a series of controversies that featured...
CELEBRITIES・21 DAYS AGO