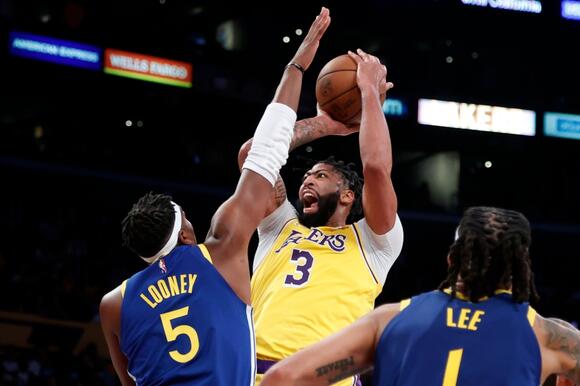 But it was a flop for their new supporting cast, including L.A. native and former league MVP Russell Westbrook.

Curry, a two-time MVP, had 21 points, 10 rebounds and 10 assists for the Warriors, who rallied from 10 points down to stun the Lakers 121-114 in a season opener Tuesday night.

The Lakers went cold in the fourth quarter, and surrendered the lead halfway through the period.

“Those two guys were spectacular,” coach Frank Vogel said. “We’re going to be pretty good if we get those type of performances. We just have to be better defensively. This is a team that is all new to each other, so everybody’s finding their way a little bit.”

Wesbrook shot just 4 for 13 for eight points in his Lakers debut.

“I told Russ to go home and watch a comedy,” James said. “Put a smile on his face. Don’t be so hard on himself.”

The Lakers had an 84-74 lead late in the third quarter after a jumper by Kent Bazemore, but the Warriors slowly closed the gap.

“We didn’t finish quarters well the whole night,” Vogel said. “We gave up a 38-point fourth quarter. If you do that you’re going to lose most nights. Our defense is just not on a string yet. I thought we did a good job being up on Steph, but the back side was much better in the first half than the second half.”

Curry made three free throws in the closing seconds of the third quarter after he was fouled taking a 3-pointer, and Jordan Poole and Damion Lee hit 3-pointers early in the fourth.

Poole’s layup with 9:17 left put the Warriors ahead for good at 91-90, and he finished with 20 points. The Warriors expanded the lead to 98-90 before the Lakers twice closed within two points.

But Curry and Nemanja Bjelica each hit 3-pointers to give the Warriors some breathing room. Bjelica had 15 points and 11 rebounds, while Lee also scored 15 points.

“We kept our composure and didn’t turn the ball over in the second half, which was a huge benefit to just maintaining the pace and giving ourselves some looks,” Curry said. “But the fact that everybody who was on the floor contributed in a meaningful way kind of speaks to our depth and how we want to play going forward. We’re excited about that and it’s good to be 1-0.”

Davis and James dominated for much of the game while welcoming a slew of new teammates, including Westbrook, Carmelo Anthony, Rajon Rondo, Dwight Howard and DeAndre Jordan.

The Lakers, who won the NBA title in the bubble in October 2020, retooled after losing to the Phoenix Suns in the first round of last season’s playoffs. They retained just three players — James, Davis and Talen Horton-Tucker, who’s out with a thumb injury.

James and Davis made 3-pointers and fallaway jumpers. In one remarkable sequence, James saved an errant pass and flicked it to Davis, who slammed it home for a 68-61 lead with 7:51 to go in the third quarter.

Warriors: Golden State remains without All-Star guard Klay Thompson, who continues to rehab an Achilles tendon injury that cost him the entire 2021 season. … The teams last met on May 19 when Los Angeles beat Golden State 103-100 at home in the opener of the league’s first play-in tournament.

Lakers: Howard welcomed fans with a short address just before the game, mentioning that it was the NBA’s 75th anniversary and closed by saying, “Let’s get it!” … Jordan and Bazemore started alongside James, Davis and Westbrook. … Anthony and Rondo got a nice hand when they subbed in together with 5:40 to go in the first quarter.

Boston Celtics big man Enes Kanter recently made headlines after he went on an all-out attack on Los Angeles Lakers superstar LeBron James and his alleged ties to China. Unsurprisingly, Kanter has United States Senator Ted Cruz backing him in his corner as the outspoken Republican also went on an unfiltered tirade against LeBron.
NBA・14 DAYS AGO
fadeawayworld.net

The Los Angeles Lakers have not had the start that many expected of them. The team is currently 10-10 with a quarter of the season out the way, and have not been convincing, to say the least. LeBron James has not been healthy, and neither has Anthony Davis which isn’t a surprise. Most importantly, Russell Westbrook has not been a great signing.
NBA・11 DAYS AGO
FastBreak on FanNation

The Golden State Warriors are in Phoenix to play the Suns on Tuesday night.
NBA・5 DAYS AGO
The Spun

Bronny James, the son of NBA star LeBron James, has literally taken his game to new heights. On Friday night, LeBron shared a jaw-dropping video of Bronny throwing down an incredible dunk in pregame warm-ups. The video showed Bronny throwing the ball off the backboard for a self-assisted windmill. The...
NBA・23 DAYS AGO

Kyle Rittenhouse’s spokesperson hit back at LeBron James on Friday after the NBA superstar mocked the 18-year-old on Twitter for crying in court while testifying in his murder trial. "It absolutely was not [fake crying]. To LeBron, I would just say he should be paying more attention to the Lakers,"...
NBA・24 DAYS AGO
ClutchPoints

The Golden State Warriors are currently in possession of the best record in the entire NBA. At this point, it would be safe to say that the Dubs’ hot start is no fluke and that they are indeed a legitimate title contender this season. Be that as it may, it...
NBA・10 DAYS AGO
WUSA

Kobe Bryant's daughters are playing where their dad used to work! Vanessa Bryant took to Instagram on Sunday to share pics of her and Kobe's youngest daughters playing basketball at the Los Angeles Lakers' facility. The court is one that Kobe knew well as he played for the team from...
NBA・13 DAYS AGO
fadeawayworld.net

On multiple occasions, the Warriors nearly tore down the potential dynasty that reshaped the NBA. It’s public knowledge that the Warriors were the best team in the NBA from 2015-2019, but that stretch of dominance nearly didn’t happen because the players making up that roster nearly didn’t make it. The Warriors nearly traded Klay Thompson to the Minnesota Timberwolves for Kevin Love, but the real kicker was that Thompson was almost packaged with the 2015 and 2016 MVP Steph Curry.
NBA・7 HOURS AGO

When it comes to social justice, NBA legend Kareem Abdul-Jabbar and Lakers superstar LeBron James are often hand-in-hand. But after LeBron’s recent behavior against the Indiana Pacers, the NBA legend has LeBron in his crosshairs. In a video posted on Substack, Abdul-Jabbar admonished LeBron for a provocative dance he did...
NBA・1 DAY AGO
fadeawayworld.net

Steve Kerr's Hilarious Reaction When Fan Asks Him To Pick Between Michael Jordan Or Steph Curry: "What, Are You Gonna Put This On Twitter?"

Steve Kerr has been surrounded by greatness during his entire career. The 8x NBA champion played alongside incredible players like Michael Jordan, Scottie Pippen, David Robinson, and Tim Duncan. After he became a head coach, he led more superstars to the promised land, taking a young Golden State Warriors team...
NBA・10 DAYS AGO
fadeawayworld.net

Stephen Curry Disagrees With Steve Kerr's Current Rotations, Feels He Loses Momentum When He Has To Come Out After Finding Rhythm

Stephen Curry is arguably in the form of his life this season. Curry is a scoring machine right now and has helped the Golden State Warriors achieve the best record in the NBA with 16-2. All is going well for the Warriors at the moment, but Steph is still not entirely happy.
NBA・10 DAYS AGO
USA TODAY Sports Media Group

Like father, like son. Wow. LeBron James has been dunking from above the rim for, pretty much, the entirety of his NBA career. Even before that in high school, he was getting up there. Now Bronny James is doing the same thing. LeBron had a proud dad moment on Instagram...
NBA・23 DAYS AGO

There has been no shortage of ups and downs during Russell Westbrook’s early tenure with the Los Angeles Lakers to begin the 2021-22 NBA season. So far, Westbrook is averaging 20.2 points, 8.0 rebounds, and 8.6 assists while the Lakers hold an 12-12 record — ranking seventh in the Western Conference. His output of 0.769 points per possession ranks last among the 19 players with at least 500 possessions.
NBA・23 HOURS AGO
Sportsnaut

Stephen Curry has been on another planet this season when it comes to his performances. He has been a steady MVP candidate while helping the Warriors achieve one of the best records in the NBA, and an incredible start to the season. And one of the greatest coaches of all...
NBA・10 HOURS AGO
fadeawayworld.net

In the history of jokes in poor taste, Nick Van Exel's tops the ranking and it resulted in him getting traded from the Los Angeles Lakers in 1998. His partnership with Kobe Bryant and Shaquille O'Neal was meant to create a dynasty, but he did not play together long enough to see it materialize.
NBA・9 HOURS AGO
hotnewhiphop.com

Throughout his career in basketball, Steve Kerr has been around a lot of legends. Of course, Kerr got to play with Michael Jordan during the second-leg of the Chicago Bulls' three-peat from 1996-1998. Kerr won three NBA titles during that time and he got to play alongside the greatest player to ever grace the court.
NBA・9 DAYS AGO
fadeawayworld.net

Steve Kerr Admits Kevin Durant's Last Season With The Warriors Was Challenging: "I Think The Fifth Year Was So Difficult - Physically, Spiritually, Emotionally..."

The Golden State Warriors had one of the most successful dynasties in NBA history, winning NBA championships during the 2015, 2017, and 2018 seasons. One of the reasons for their sustained success was Kevin Durant joining them in 2016 free agency, making them the undisputed best team in the league.
NBA・3 DAYS AGO
Sportsnaut

Kurtenbach: Steph Curry is at his peak, but the difference with these Warriors is something else

If you’re wondering how the Warriors have gone from a team that had to scratch, claw, and streetlight to make the play-in tournament — and then couldn’t escape it — last year, to now being a team that is arguably the best in the NBA, the last two games tell you everything you need to know.
NBA・14 DAYS AGO