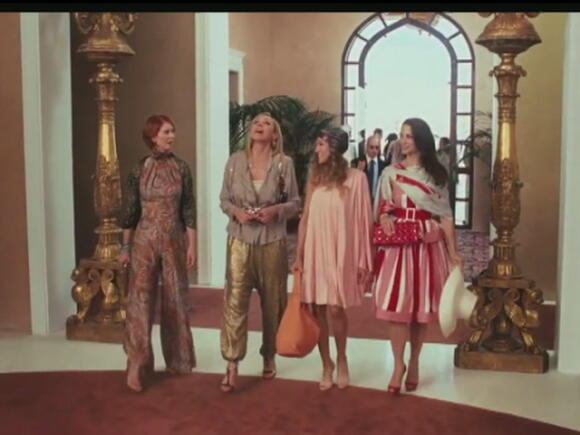 Sex and the City author Candace Bushnell has offered her take on the feud between actors Kim Cattrall and Sarah Jessica Parker .

Cattrall has not joined Parker, Kristen Davis and Cynthia Nixon for upcoming revival series, And Just Like That... with many fans disappointed that she won’t be returning to the role of Samantha.

Bushnell also discussed how Parker is totally different from Carrie Bradshaw: “In real life, those women are not those characters – they are the opposite. Sarah Jessica Parker, she’s been married forever to the same guy. She’s got kids. I don’t know her very well, but she seems to be very family-oriented.”

She also suggested that the reasons for the revival were primarily financial: “HBO’s going to make money on it. They’re going to exploit it as much as they can. They rebooted Gossip Girl . If they didn’t reboot Sex in the City , it would be really strange.”

Bushnell says she will be watching the show, which is based on her book of the same name: “Of course I’m going to watch it. I hope it runs for six seasons. I get paid a little bit of money.”

Parker and Cattrall have reportedly never gotten on, with Parker paid more than her co-stars for the duration of the show. 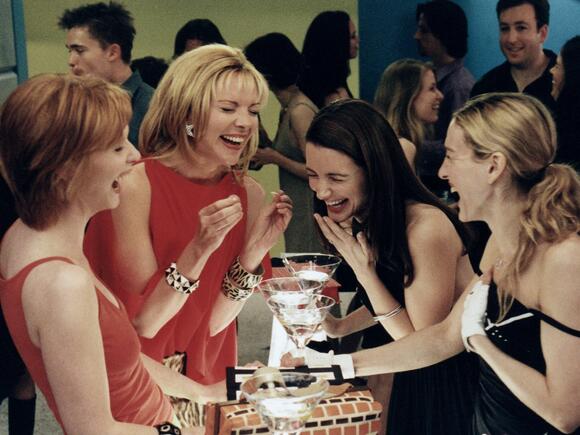 And Just Like That... will premiere in December on the HBO Max streaming service.

Nobody was surprised when Kim Cattrall was the only one not to reprise her role for And Just Like That..., HBO Max's limited series revival of Sex and the City, but showrunner Michael Patrick King just added an element of intrigue. "What you know is that Kim Cattrall is not...
CELEBRITIES・8 DAYS AGO
In Style

If you've been following my writing for a while now, you probably know two key things about me: I'm a shoe-obsessed shopping editor, and I love jeans. But not just any ol' jeans: a really good, ultra-flattering pair that fuses comfort and style with a little shaping action. It's been a journey, but ever since Sarah Jessica Parker inspired me to try 7 For All Mankind jeans, I can confidently say that I have found my perfect pair.
DESIGNERS & COLLECTIONS・4 DAYS AGO
Floor8

Sarah Jessica Parker shares a glimpse of Hocus Pocus 2 rehearsals to her social media on Sunday, Nov. 14. "No rest for the wicked" she wrote online, perhaps making a reference to the fact that the 56-year-old actress had just wrapped up filming for the HBO Max reboot of Sex and the City, newly titled, And Just Like That ...
MOVIES・13 DAYS AGO
Distractify

And just like that, Sarah Jessica Parker’s net worth is getting a big boost! The Sex and the City saga is continuing with And Just Like That…, a sequel series hitting HBO Max on Dec. 9. And Variety reports that the central trio of stars — Sarah, Cynthia Nixon, and Kristin Davis — are getting between $650,000 and $750,000 per episode. (Fellow Sex and the City alum Kim Cattrall, meanwhile, is sitting this show out.)
CELEBRITIES・13 DAYS AGO

“Extra’s” Rachel Lindsay spoke with Hilary Duff at the Baby2Baby Gala, where she spilled fun secrets about her upcoming Hulu series “How I Met Your Father.”. Duff noted that she had “one more week” of shooting the first season, gushing, “The cast is amazing! Everyone is so funny, but so excited to be there… Our writers are incredible…”
CELEBRITIES・12 DAYS AGO
People

Bette Midler, Sarah Jessica Parker and Kathy Najimy were photographed on the Newport, Rhode Island set of Hocus Pocus 2 filming night scenes. The three were seen standing close together in costume as they filmed. The actresses are returning as Winifred, Sarah and Mary Sanderson — evil witches who consume the youth of children to regain their own.
NEWPORT, RI・9 DAYS AGO
In Style

The Unexpected Shoe Reese Witherspoon, and Sarah Jessica Parker Wear on Repeat Is on Sale for Black Friday

Swedish Hasbeens makes shoes that are known for being extremely comfortable, but they've never gotten the attention they truly deserve. Its classic clogs and playful sandals have constantly been overlooked for subtle white sneakers or hyper-trendy boots. But now, clogs are a huge trend that shows no signs of slowing down, and celebrities are giving the brand its shine.
BEAUTY & FASHION・3 DAYS AGO
Us Weekly

Sarah Jessica Parker Has Been Using This Lightweight Moisturizer ‘Forever’

Us Weekly has affiliate partnerships so we may receive compensation for some links to products and services. Summer skincare is not the same as winter skincare. Trust Us, we’ve tried to carry over our favorite winter products into the warmer months, and vice versa, and failed. Different weather conditions mean different skin conditions; we just have to be prepared!
BEAUTY & FASHION・18 HOURS AGO

Willow Smith kicked off her 21st birthday with an epic Halloween party in a costume that made fans lose it. The Whip My Hair crooner looked beyond stunning as she transformed into Brad Pitt’s Fight Club character Tyler Durden for the fete, giving the look a high-fashion twist we won’t soon forget.
BEAUTY & FASHION・26 DAYS AGO
HollywoodLife

Paul McCartney and his daughter Mary had a father-daughter date night at the premiere of the upcoming docuseries ‘The Beatles: Get Back’ in London. It was a family affair at the London premiere of The Beatles: Get Back, an upcoming three-part documentary series that will offer Beatles fans an intimate glimpse of the band’s most pivotal recording sessions. Former Beatle Paul McCartney attended the premiere on Tuesday, Nov. 16 with daughter Mary, 52. The 79-year-old musician was all smiles as he posed with his photographer daughter on the red carpet, wearing a sharp navy blue suit.
MUSIC・11 DAYS AGO
extratv

Actor George Clooney, 60, is opening up about the shocking moment he found out his wife Amal was expecting twins. Clooney shared the story on the “WTF with Marc Maron” podcast, saying he never thought having a family was in the cards for him. "Listen, I didn't want to get...
CELEBRITIES・11 DAYS AGO
Indy100

Emily Ratajkowski has explained why Pete Davidson is seen as attractive to so many women and she has given him a pretty good review. Speaking on Late Night With Seth Meyers to promote her new memoir, the model waxed lyrical about the comedian’s charms and questioned why some people don’t understand how he is such a successful dater.
CELEBRITIES・17 DAYS AGO

Ariana Grande was engaged to Pete Davidson before tying the knot with husband Dalton Gomez, but she isn’t fazed by his new romance with Kim Kardashian. Ariana Grande, 28, is happier than ever, and seemingly hasn’t paid any mind to who her ex-fiance Pete Davidson is romancing. The 27-year-old Saturday Night Live comedian has been spotted on multiple romantic dates with Kim Kardashian, 41, however, the “Into You” singer is unfazed. “Pete and Ariana have both dated other people since they called off their engagement. Ariana is married now and happier than ever,” a source close to the chart-topper told HollywoodLife exclusively.
CELEBRITIES・22 DAYS AGO
demotix.com

Kanye West seems to be in denial about his current relationship status. A few days ago, Ye made an appearance at Revolt TV when he was asked to comment on recent rumors about Kim Kardashian and Pete Davidson’s supposed romance. Wiggling his way out of the uncomfortable question, Kanye spun...
CELEBRITIES・18 DAYS AGO
Insider

Pete Davidson says he takes women to good restaurants in case he's a "shitty" date. Speaking on "River Cafe Table 4" podcast, he said if he's a bad date, "at least the food was great." Davidson also told host Ruthie Rogers that dates who are rude to waiting staff are...
BEAUTY & FASHION・10 DAYS AGO
US Magazine

Supportive! Kim Kardashian is still exploring her relationship with Pete Davidson, but he has already won over her famous family. “The family is happy for Kim, and they really have taken a liking to Pete,” a source exclusively tells Us Weekly. “A lot of the Kardashians met him in the past and have hung out with him, so he’s not like this new stranger that just entered into their lives. They think he’s funny and is fun to be around. He’s someone that just lightens the mood in the room.”
CELEBRITIES・8 DAYS AGO

A lot of fans were surprised when word came out that Oscar winner Renée Zellweger had started dating Christina On the Coast’s Ant Anstead back in late June. The two had met while Zellweger appeared on his new show, Celebrity IOU Joyride, hit it off, and started taking walks where they were spotted smooching publicly not long after, though they haven’t said much about their relationship. Now, it sounds like the new-ish couple is getting even closer as Anstead prepares to renovate his home, because Zellweger has moved into a house near him.
CELEBRITIES・12 DAYS AGO
Hello Magazine

Will Smith has spoken of the heartbreak he felt when his son Jaden asked to become an emancipated minor at the age of 15. The actor, who starred alongside his son in the box office dud After Earth, revealed how he felt his son was "betrayed" by his father's actions after it was Will who had "coached" him through the film.
CELEBRITIES・23 DAYS AGO
editorials24.com

Pete Davidson has turned into quite the Casanova, so how does he pick who to date next?. In Tuesday’s episode of iHeartRadio’s River Cafe Table 4 with Ruthie Rodgers, the Saturday Night Live star admitted that he’s figured out the best way to determine if a girl is worth a second date and how to make himself look good in the process. Sharing his top-notch dating tip, the comedian expressed:
CELEBRITIES・11 DAYS AGO
Closer Weekly

Since his rise to fame on The Andy Griffith Show, Ron Howard has gone on to dominate Hollywood with some of the biggest blockbuster films. The director and actor got his start in show business when he was just 5 years old. His net worth after over 60 years in the entertainment industry will blow your mind.
CELEBRITIES・12 DAYS AGO