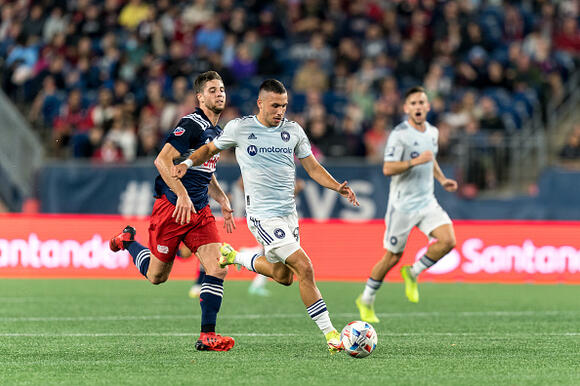 CHICAGO – For many fans of the club, the thought of making the postseason had left their minds a long time ago as they struggled with consistency since the beginning of the season.

But on Saturday night, despite one of their best efforts in 2021, Chicago Fire FC saw their playoff hopes officially come to an end. A 2-2 draw with MLS-leading New England in Foxborough was enough to eliminate them from contention, though in reality, it had happened long before.

The dismissal of manager Raphael Wicky on September 30th essentially turned the focus to 2022, where the club will have a number of decisions to make when it concerns their roster. A new manager will then be in charge of bringing the team back to relevance in the league as the club will now miss the playoffs for a fourth-straight year and eighth time in the last nine years.

With interim manager Frank Klopas in charge, the Fire now looks ahead to their final four matches of the season, starting with a road contest against FC Cincinnati at 6:30 PM on Wednesday, which you can watch on WGN-TV at 6:30 PM.

“ Finish the season strong. Anything can happen in life. We can focus on ourselves, focus on the next four games and give our all and see where we end,” said defender Johan Kappelhof I think that’s the most important thing we need to do is finish strong and show pride.”

At the same time, the club will be taking the four matches to look over the roster and see what changes will be made. After just missing the expanded 2020 MLS Playoffs, the Fire have mostly been out of the running for a playoff spot the entire season, going 7-16-7 with just one victory away from Soldier Field.

Lack of progress after the team was flipped over after the 2019 season when a new owner and front office were installed led to Wicky’s dismissal while also putting pressure on sporting director Georg Heitz as he looks ahead to his third season.

Two of the team’s three designated players – Robert Beric and Gaston Gimenez – have club options for next season, and could be a place where evaluation starts. The club will also have to make decisions on a number of other players to see where they might fit in the equation moving forward.

Those decisions will come when the season concludes in early November, until then the group can do what they can to make the most of this time to look to the future.

“We have a lot of quality with guys that are great on the ball. I think where we can improve is more matureness,” said Kappelhof on what the team can improve on now to help in 2022. “You know, in certain moments in the game, (being) more mature, more fight for the result and not always pretty but sometimes you need to be ugly, too, to win games.

“And if we show (that) a little bit more, I think we’ll have more results.”

CHICAGO – It will be another year of change for Chicago Fire FC on the field in 2022 along with their schedule, as fans will get to see the club at home earlier than at any point in their history. Major League Soccer announced the club’s first two games of next season, including the home […]
MLS・13 DAYS AGO
WGN News

CHICAGO – It’s hardly been a secret to supporters or those around Major League Soccer the past week, but on Wednesday the club made it official when it comes to their new manager. In hopes of bringing their club towards the top of the league, Chicago Fire FC is hiring a man with a track […]
MLS・12 DAYS AGO
WGN News

While the roster will change, Jonathan Bornstein will return to Chicago Fire FC

CHICAGO – Two things are apparent when it comes to the club’s offseason ahead of the 2022 season, and one of them was obvious before this week. After deciding not to bring back a number of players from the 2021 team, it was apparent that Chicago Fire FC roster would look much different when they […]
MLS・4 DAYS AGO
FanSided

Chicago Fire has seen a lot of characters come and go over the years. While some of these departures have been of the more permanent kind, many others have been in ways that left the door wide open for characters to return when the timing was right. This has allowed the writers to bring back characters from time to time via guest appearances and even a few multi-episode arcs.
TV SERIES・9 DAYS AGO

An NFL head coach admitted on Sunday evening that he made a “horrific” mistake during his team’s loss on Sunday. The Cincinnati Bengals had been playing well as of late, but they fell back down to Earth on Sunday, losing to the Los Angeles Chargers. Cincinnati fell to Los Angeles,...
NFL・21 HOURS AGO
NBC Sports

Many were confused by the fact that the Lions were not required to run a point-after try after taking a 29-27 lead with no time left on Sunday. Some suggested the officials erred by not running one more play. According to the league, it was handled properly. The provision comes...
NFL・23 HOURS AGO
hotnewhiphop.com

It has been a very difficult season for the Chicago Bears, who have been terrible on offense. They can't seem to figure out their quarterback situation and at a record of 3-7, it has gotten to the point where fans are starting to give up home. Head coach Matt Nagy has been the subject of a ton of scrutiny as of late, and many are calling for him to be fired. This is only being exacerbated by the fact that the Bears play the Detroit Lions on Thanksgiving, and a loss to them would be beyond embarrassing.
NFL・12 DAYS AGO
FanSided

The Chicago Bears were unlikely to upset the Arizona Cardinals, but it was clear that there was a path to it. The Cardinals have a poor run defense, and if the Bears can do anything on offense at this point, it is run the football. This showed as the Bears...
NFL・9 HOURS AGO

When looking back at past seasons of Chicago Fire, season 10 might not be the season with the most casting shakeups but the season sure has been an interesting one, to say the least. Thus far this season we’ve seen one of the show’s original leads exit the series in...
TV SERIES・14 DAYS AGO
Post-Bulletin

While not rich in talent, the Melcher-Dallas Boys Basketball Squad is hopeful to make up for the lack of basketball talent with hard work. Coach John Suntken tells KNIA Sports he would take a team full of talent…but sometimes the hard working teams surprise. Suntken: “Talent isn’t everything, sometimes talent...
MELCHER-DALLAS, IA・8 DAYS AGO
themiamihurricane.com

After a roller coaster of a season filled with a fair share of ups and downs, Miami is looking to end its regular season on a high note when it travels to Durham, North Carolina to face Duke. “We’ve got to make sure we finish the regular season,” Hurricanes head...
MIAMI, FL・9 DAYS AGO

Kansas shakes up coaching staff after 2-10 finish to season

LAWRENCE, Kan. (KSNW) – KU head coach Lance Leipold announced Monday that defensive line coach Kwahn Drake and cornerbacks coach Chevis Jackson will not be returning to the coaching staff. Jordan Peterson and Taiwo Onatolu, who both served as senior analysts this past season, have been promoted to on-field coaches. “I want to thank Coach Drake […]
KANSAS STATE・6 DAYS AGO
WGN News

CHICAGO – It’s already been an incredible year for a history-making goalkeeper from Addison, but it keeps getting better as 2021 comes to a close. On Friday, the United States Men’s National Team called up Gabriel Slonina to the top squad for the team’s December friendly December 18th against Bosnia and Herzegovina at Dignity Health […]
MLS・2 DAYS AGO
homenewshere.com

Senior captain Chirichiello looking to play at next level: The big anchor of the offensive and defensive lines finishing up stellar career

WILMINGTON – Several years ago when the current senior class were freshmen and sophomores, Wilmington High School football coach Craig Turner kept raving about this group, saying how much potential they all had. His inclination was correct as those players helped lead the 'Cats to their second playoff win in program history just two weeks ago.
WILMINGTON, MA・9 DAYS AGO
WGN News

Throwback Thursday: The one blemish on a Bears’ championship season 36 years ago

CHICAGO – The stories have been told ad nauseum, from the victories to the characters on their team to their famous song to celebrate their accomplishment. The 1985 Bears have become so much a part of Chicago sports lore that the only defeat of their Super Bowl championship season is even something people are willing […]
NFL・3 DAYS AGO
WGN News

As they’ve done lately, Blackhawks make the most of extra time against the Capitals

WASHINGTON D.C. – One of the reasons that the Blackhawks have been able to enjoy some success with interim head coach Derek King has been their ability to do the most with extra time. Another example came on Thursday night when the team’s late rally brought them new life on the road against one of […]
NHL・3 DAYS AGO
inquirer.com

EAST LANSING, Mich. — It’s been the same old story for Penn State’s offense for much of the 2021 regular season. Yes, the Nittany Lions sporadically hit on some explosive plays, thanks to likely All-America wide receiver Jahan Dotson and rapidly emerging wideout Parker Washington, but they don’t do it consistently. Instead of having one of the top-scoring offenses in the Big Ten as was predicted early in the season, they were middle of the pack, unable to finish off drives and pull out tight games.
EAST LANSING, MI・8 DAYS AGO
WGN News

NEW YORK – You can’t blame fans of the Chicago or New York City NBA franchises for feeling a little nostalgic as they watched their teams play at Madison Square Garden on Thursday night. Both the Bulls and the Knicks have returned to relevancy together for the first time in a decade and many have […]
NBA・3 DAYS AGO
CBS Philly

CHESTER, Pa. (CBS) — A COVID crisis may have dashed the dreams of the Philadelphia Union fighting for an Eastern Conference Championship. Sunday’s game was the biggest in the franchise’s history. However, 11 key players were sidelined by the league’s health and safety protocols. “We’ll never know what we could have done tonight with a full group,” Head Coach Jim Curtin said after the loss. Philadelphia Union players, coaches and fans are only left to wonder after COVID health protocols sidelined 11 players, including their captain and goalie. Current health guidelines force players to quarantine if they have high-risk close contact, inclusive test...
MLS・18 HOURS AGO