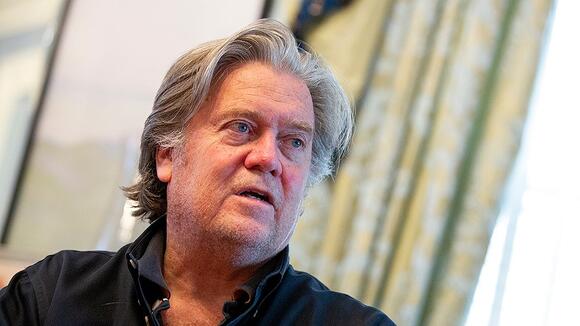 House Republican leaders have advised members to vote “no” on a coming vote to refer former Trump White House strategist Stephen Bannon to the Justice Department for criminal prosecution after he defied a subpoena from the committee investigating the Jan. 6 attack on the Capitol.

House Minority Whip Steve Scalise (R-La.) made the recommendation at a conference meeting Wednesday morning, one day before the House is scheduled to take up the select committee's recommendation.

“For the past ten months, several nonpartisan entities interested in investigating the attack on the Capitol Building have worked diligently to determine what went wrong and how to prevent it from happening again,” a whip notice released Wednesday evening reads, saying the committee “is more interested in pursuing a partisan agenda to politicize the January 6th attack rather than conducting a legitimate good faith investigation into the security failures leading up to and on that day.”

The Thursday vote before the full House would leave the Justice Department to pursue a fine, jail time or both for the former Trump strategist, who has been asked to testify about his involvement in planning for the rally at which Trump spoke on Jan. 6 shortly before his supporters marched across the National Mall.

The whip notice goes on to cast doubt over the reach of congressional power, saying that Congress’s authority “does not include law enforcement powers”

It also suggests Congress has no authority to issue subpoenas to seek information beyond that needed to legislate.

“Congress has a significant and important oversight power to secure needed information in order to legislate, however, Congress does not have enumerated constitutional powers to conduct investigations or issue subpoenas outside of that scope,” it says.

The argument goes beyond that made by Bannon, who did not question the committee’s authority but said he should not have to appear before the committee before Trump’s efforts to block testimony through executive privilege claims are heard in court.

The Jan. 6 committee has identified Bannon as a key figure in its investigation, arguing he appears to have substantial information about planning around the rally where Trump spoke before encouraging his supporters to “fight like hell.”

Democrats on Thursday will argue Trump cannot assert executive privilege after leaving office, particularly over someone not under his employment at the time in question.

Shortly after the conference meeting Wednesday, Reps. Matt Gaetz (R-Fla.) and Jim Jordan (R-Ohio) offered a defense of Bannon as the House Rules Committee, which sets the terms of debate, voted to forward the resolution on Bannon.

“The actions of the Jan. 6 committee, I believe, are a complete assault on Americans’ liberty,” Jordan said, adding that it is inappropriate to subpoena those who had applied for a permit for the rallies or to ask major tech and social media companies to preserve records of those discussing Jan. 6.

Wyoming Republican Rep. Liz Cheney, vice chairwoman of the House select committee tasked with investigating the Jan. 6 attack on the U.S. Capitol, issued a warning to former President Donald Trump amid his posturing that he wanted to debate members of the committee: Lie, and there will be criminal penalties.
CONGRESS & COURTS・1 DAY AGO
Newsweek

To date, Trump has made at least four assertions of executive privilege since leaving office in an attempt to block the release of sensitive information.
CONGRESS & COURTS・2 DAYS AGO
Washington Post

The House select committee investigating the Jan. 6 attack on the U.S. Capitol voted unanimously Wednesday to hold former Trump Justice Department official Jeffrey Clark in criminal contempt for failing to cooperate with its inquiry. It is unclear when the full House could take up the contempt resolution, but if...
PRESIDENTIAL ELECTION・1 DAY AGO
Fox News

WASHINGTON - The House Democrats at most risk of losing their seats in the 2022 midterm elections are pressuring congressional leaders to focus early next year on economic issues such as controlling inflation and addressing supply chain disruptions amid concerns the party is losing ground with voters who are worried about rising costs and skeptical the economic recovery will continue.
CONGRESS & COURTS・21 HOURS AGO
POLITICO

The former president’s lawsuit to shield his White House records came under scrutiny in court on Tuesday.
WASHINGTON, DC・2 DAYS AGO
iheart.com

House Republican leader Kevin McCarthy is leading the "'Ku Klux Klan Caucus" according to New York Democrat Alexandria Ocasio-Cortez. She tweeted the California Republican is looking the other way when it comes to threats of violence against women of color who are members of Congress. She claimed he's doing so...
CONGRESS & COURTS・14 HOURS AGO

The House on Thursday voted to pass a short-term spending bill to fund the government through mid-February, as lawmakers work quickly to avert a shutdown on Friday.
CONGRESS & COURTS・8 HOURS AGO
News 8 WROC

Jan. 6 panel to vote on contempt against former DOJ official

If approved by the panel, the recommendation of criminal contempt charges against Clark would go to the full House for a vote as soon as Thursday.
CONGRESS & COURTS・1 DAY AGO
WSPA 7News

The House passed a bill Thursday that funds the government through Feb. 18 and avoids a short-term shutdown after midnight Friday, but quick Senate approval was in doubt because of a fight over President Joe Biden's COVID-19 vaccine mandates.
CONGRESS & COURTS・9 HOURS AGO
TIME

This article is part of the The DC Brief, TIME’s politics newsletter. Sign up here to get stories like this sent to your inbox every weekday. Welcome to Washington, currently home to an octogenarian staring contest that will determine whether the military will stand ready, inspectors will check the food heading to holiday tables and families shuffle through busy airports with TSA screeners working with pay—or not.
CONGRESS & COURTS・1 DAY AGO

WASHINGTON (AP) — The federal government could be heading for temporary shutdown, with Republicans poised to stall a must-pass funding bill in their effort to force a debate in Congress on rolling back the Biden administration’s COVID-19 vaccine mandates for some workers. Conservative Republicans in the House and Senate who are opposed to Biden’s vaccine rules want […]
PRESIDENTIAL ELECTION・1 DAY AGO
KREX

WASHINGTON (AP) — Democratic Minnesota Rep. Ilhan Omar on Tuesday played a harrowing death threat recently left for her by voicemail while imploring House Republican leaders to do more to tamp down “anti-Muslim hatred” in their ranks and “hold those who perpetuate it accountable.” Omar, one of only a handful of Muslim members of Congress, […]
CONGRESS & COURTS・1 DAY AGO
Washington Post

House Republican leaders are facing calls to condemn Islamophobic remarks by members of their conference, amid mounting concern that their silence is enabling extremist rhetoric that contributes to bigotry and potential threats of violence toward Muslims. At a Capitol news conference Tuesday, all three Muslim lawmakers currently serving in the...
CONGRESS & COURTS・2 DAYS AGO
New York Post

Meadows in contact with Jan. 6 House panel after talk of contempt vote

Former Trump White House chief of staff Mark Meadows “has been engaging” with the House select committee investigating the Jan. 6 Capitol riot, according to the panel’s chairman — at least temporarily ending talk of holding Meadows in contempt of Congress. Rep. Bennie Thompson (D-Miss.) said in a statement Tuesday...
CONGRESS & COURTS・2 DAYS AGO
TheAtlantaVoice

Georgia Rep. Marjorie Taylor Greene, one of Donald Trump’s staunchest allies in Congress, on Thursday laid out demands for a GOP leader to earn her vote for House Speaker if Republicans are able to retake the majority after the 2022 elections and cast doubt on House Minority Leader Kevin McCarthy being elected to the position. “We know that Kevin McCarthy […]
CONGRESS & COURTS・6 DAYS AGO
Business Insider

Marjorie Taylor Greene said Kevin McCarthy doesn't have the full support of the House GOP to run for speaker. She also called McCarthy out for letting her and Rep. Paul Gosar take "abuse." Greene made the comments during an appearance on Rep. Matt Gaetz' podcas, "Firebrand. Georgia Rep. Marjorie Taylor...
PRESIDENTIAL ELECTION・7 DAYS AGO
Mercury News

This past Wednesday afternoon, we got perhaps the most disappointing answer yet to a question that I have been asking myself for most of my journalistic career. It happened as we watched the House’s dueling speeches and censure of the unrepentant Rep. Paul Gosar, R-Ariz., for having tweeted an anime video of himself as a cartoonish superhero fatally stabbing Rep. Alexandria Ocasio-Cortez, D-N.Y., and swinging two swords at President Joe Biden.
CONGRESS & COURTS・8 DAYS AGO