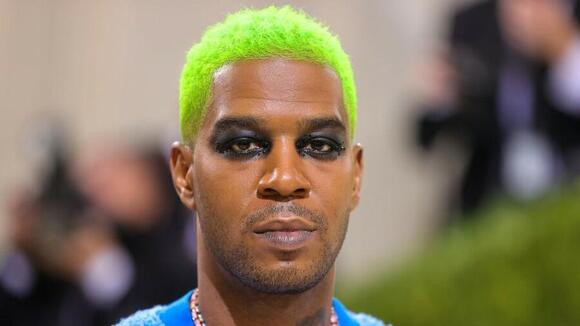 Kid Cudi wants it to be known that he's innocent.

During opening night at the Staples Center on Tuesday night, the Los Angeles Lakers faced off against the Golden State Warriors in front of a star studded crowd. Stars like Adele , Lil Wayne and Floyd Mayweather were in attendance, as well as Kid Cudi , who sat front row while donning a 'Tune Squad' uniform from Space Jam: A New Legacy starring LeBron James.

Things got intense on the court when Warrior Steph Curry came down from making a shot, and slipped on the sidelines, right in front of Cudi and Mayweather. Viewers speculated that a fan had spilled a drink on the court, causing Curry's fall. Fans took to Twitter with their speculations that due to proximity, the Kids See Ghosts rapper was responsible for the incident. One Twitter user wrote:

"Kid Cudi almost being responsible for a Steph Curry broken ankle is not what I was expecting when I woke up today."

Cudi took to the app to defend himself, chiming in:

"That was NOT me! Hahah"

Fortunately, Steph Curry walked away from the fall with no injuries, besides a minor scar on his knee. Ultimately, he and the Golden State Warriors defeated LeBron James and the Lakers. The minor incident comes on the hills of Cudi making headlines for responding to less than favorable reviews of his album catalogue. He shared in a tweet:

"I think when I was younger I thought it would hurt my career. Like the fans would listen to the reviews and not give the music a chance. Then, I realized over the years after I survived each era and made album after album, that nothing anyone could ever say would stop my light."

Aside from kicking courtside at basketball games and front row at fashion shows, Cudi has also been working on music. Earlier this month, the rapper's untitled song with Jay-Z was featured in the trailer for the upcoming Netflix film The Harder They Fall .

Catch the Jay-Z produced film when it hits theaters on October 22nd and Netflix on November 3rd.

It ain’t easy being the 3-year-old son of Golden State Warriors star Steph Curry. Never mind that Curry just scored 20 points Sunday to help the team beat the Houston Rockets — Canon Curry got upset as he watched his dad disappear into the tunnel after the game. The touching moment was caught on video by Let’s Go Warriors.
NBA・24 DAYS AGO
Sports Illustrated

The Golden State Warriors crushed the Brooklyn Nets 117-99 on Tuesday night to improve to a 12-2 record, which is the best in the NBA. Meanwhile, the Nets fell to 10-5, (but they did rebound on Wednesday night beating the Cleveland Cavaliers 109-99 to improve to 11-5). Kevin Durant was...
NBA・13 DAYS AGO
fadeawayworld.net

LaVar Ball is known as a very outspoken person, who generally is willing to express his opinions no matter how controversial. We've seen him talk up the basketball abilities of both his sons in Lonzo Ball and LaMelo Ball. His claims on a lot of subjects are generally viewed as outlandish by NBA fans.
NBA・27 DAYS AGO
ClutchPoints

It looks like Draymond Green believes in the saying “Start ’em young.” This is exactly what the Golden State Warriors star is doing with his son, Draymond Jr., who himself appears to be auditioning for Stephen Curry’s job. Here’s a heartwarming clip of Draymond Jr. assisting his dad during 1-on-1...
NBA・29 DAYS AGO

Steph Curry dominated in the Golden State Warriors' win over the Brooklyn Nets last night with a game-high 37 points and nine three-pointers. His former teammate, Kevin Durant, had 19 points, but did not score a field goal in the third quarter. Golden State has the best record in the NBA. A columnist wrote that Curry and the Warriors are winning the breakup with KD. Marcellus Wiley explains why KD is winning the breakup over Steph.
NBA・14 DAYS AGO
FastBreak on FanNation

The Golden State Warriors are the best team in the NBA to start the season, and I think that they should bring back Monta Ellis who played with Steph Curry years ago.
NBA・13 DAYS AGO
FastBreak on FanNation

The Golden State Warriors beat the Chicago Bulls on Friday night, and Steph Curry had a sensational shot in the first half.
NBA・19 DAYS AGO
FastBreak on FanNation

Steph Curry and the Golden State Warriors lost to the Phoenix Suns on Tuesday evening in Arizona.
NBA・1 DAY AGO

Steph Curry is widely regarded as an NBA “little guy.” It’s partly his game—using his jitterbug handles and quick release to get off one long-range jump shot after the next. It’s partly his frame, which looks like a stick figure after Thanksgiving dinner. But if you’re wondering why people really think of Steph Curry like Muggsy Bogues—Curry is 6’ 2,” taller than you “tall” friend probably—it’s because of stuff like this.
NBA・13 DAYS AGO
Sports Illustrated

Update: Steph Curry is now listed as probable for the game (see tweet below from FantasyLabs. The Golden State Warriors are the best team in the NBA with a 12-2 record in their first 14 games of the 2021-22 season. On Thursday night they will play in Cleveland, Ohio, against...
NBA・13 DAYS AGO
Benzinga

A video of Golden State Warriors star Steph Curry playing Rock, Paper, Scissors with the son of Benzinga Co-Founder Jason Raznick at Little Caesars Arena on Friday night is going viral. What happened: Curry accepted the challenge as he approached Josh Raznick who was standing courtside with a sign reading...
NBA・12 DAYS AGO

The Last 40 Scoring Champions: Michael Jordan Is The Best Scorer In NBA History

The scoring rate in the NBA these days is at an all-time high, as teams are focusing on efficient ways of scoring a ton of points. Of course, we have some of the most spectacular offensive players of all time including James Harden, Kevin Durant, and Stephen Curry playing at MVP levels every year. For the best scorers, winning scoring titles comes naturally to them because of how effortlessly they get buckets.
NBA・10 DAYS AGO
SFGate

Shaquille O'Neal On Stephen Curry's Shooter GOAT Status: "Steph Is Up There All By Himself As The Best Shooter Ever."

Stephen Curry keeps making history this season, showing why he is one of the most influential players the NBA has ever seen. The Golden State Warriors superstar is on a mission this campaign, leading his squad to a 14-2 league-best record. The shooter is playing at an MVP level, taking...
NBA・12 DAYS AGO
SFGate

A first-half hamstring injury for Phoenix Suns All-Star Devin Booker took some steam out of what was billed as the steamiest game of the still-young 2021-22 NBA season Tuesday night between the 17-3 Suns and 18-2 Golden State Warriors. Booker was ruled out for the remainder of the game after...
NBA・1 DAY AGO
FanSided

The Long Two: What’s wrong with the Lakers and what’s up with Steph Curry’s minutes?

The championship-or-bust Lakers currently sit well outside the championship picture. How much should we be worried about L.A.’s slow start?. The Lakers introduced significant downside risk to their season the moment they traded for Russell Westbrook, but it was hard to see things going this poorly this fast. We knew it would be difficult for Frank Vogel to merge Westbrook’s inefficient, inflexible offense with LeBron James’ ball-dominant style; that the number of declining veterans on the roster could make it difficult to construct another top-flight defense; that key players might be susceptible to regression, injury or both. It was always possible, even likely, that this team would stumble over one roadblock or another, but L.A. has managed to run smack into nearly every obstacle through its first 16 games.
NBA・14 DAYS AGO
95.7 The Game

Take a closer look at Steph Curry’s new substitution patterns, which have been solidified by Steve Kerr and his staff over the past five games.
NBA・13 DAYS AGO
prosportsoutlook.com

Steph Curry is the Best Player in the World; Nobody’s on His Level Right Now

Many consider Golden State Warriors superstar PG Steph Curry the greatest shooter in NBA history, and that is well-deserved. However, with GS surging to the top of the NBA to start the 2021-22 season, it is safe to say that no one is playing on the same level as Curry right now. With a blowout win over the Brooklyn Nets and a comeback victory over the Cleveland Cavaliers to cap the week, Curry has helped Golden St. send a message to the league to start the season. They are back, and the NBA’s best player is leading the charge.
NBA・13 DAYS AGO