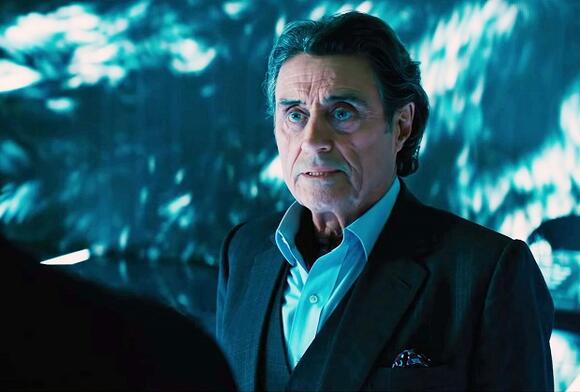 Produced by Lionsgate Television, the three-night event takes John Wick fans back to 1975 New York City, where a young criminal named Winston Scott (Woodell) navigates the city’s nefarious underbelly in an attempt to take control of The Continental, a notorious hangout for all manner of ne’er-do-wells.

* Chicago P.D. has promoted executive producer Gwen Sigan to showrunner, replacing Rick Eid, who will remain an EP while focusing on his showrunning duties at FBI and the Law & Order revival, per Deadline .

* F Is For Family ‘s fifth (and final) season will be released Thursday, Nov. 25 (aka Thanksgiving) on Netflix.

* Wipeout will return with new episodes on Tuesday, Jan. 11 on TBS.

* discovery+ and OWN have announced The Great Soul Food Cook-Off , a cooking competition celebrating Black chefs and the Black culinary traditions that are the cornerstone of American cuisine. The six-episode series will debut Saturday, Nov. 20.

* Prime Video has set a Friday, Dec. 3 premiere for Harlem , a single-camera comedy from Girls Trip writer Tracy Oliver and starring Meagan Good ( Deception ), Grace Byers ( Empire ), Shoniqua Shandai ( I Am the Night ), Jerrie Johnson ( Good Trouble ) and Tyler Lepley ( The Haves and the Have Nots ).

Judge Steve Harvey‘s court is in session. ABC has released a promo for the new one-hour unscripted courtroom comedy series, premiering Tuesday, Jan. 4 at 8/7c. In the program, “real-life people with real-life conflicts will present their case in [Harvey’s] courtroom, ranging from family disputes, unpaid bets, sour friendships and everything in between,” per the official description. “With the help of Nancy, his trusted bailiff by trade, Steve plays by his own rules, basing his courtroom on his own life experiences and some good old common sense.” Ready for more of today’s newsy nuggets? Well… * Disney+’s forthcoming Star Wars: Ahsoka series, starring Rosario...
TV & VIDEOS・4 DAYS AGO
TVLine

Can Chicago P.D.‘s Atwater navigate a sticky situation? Will The Wonder Years‘ holiday episode be a gift? Will Manifest wrap Zeke’s story? Read on for answers to those questions plus teases from other shows.  (Email any brand-new Qs to InsideLine@tvline.com.) What’s coming up for Atwater on Chicago P.D.? –Demar “Atwater has some powerful episodes coming up this season,” showrunner Gwen Sigan tells Inside Line. “We’ll dive once again into his relationship with Celeste, a woman he cares deeply about but who isn’t aware he’s a cop. Atwater’s lies put him in a tricky position — both morally and on the job. It’s quite...
TV SERIES・10 DAYS AGO
TVLine

The CW this Sunday night commemorated the 50th anniversary of The Homecoming: A Christmas Story — the 1971 TV-movie that wound up siring The Waltons — with a remake. But did it evoke enough folksy charm? As with the source material, and set in 1933, The CW’s The Waltons’ Homecoming found the titular family readying for Christmas but also waiting… and waiting… for patriarch John Sr. (played by Ben Lawson) to come home for the holiday from his far-away job. (John’s already long bus ride was further slowed by a brewing snow storm, and is eventually derailed when the bus skids...
MOVIES・5 DAYS AGO
Variety

Jurnee Smollett has landed the female lead in “The Burial,” a new courtroom drama from Amazon Studios. The “Lovecraft Country” actor will star opposite Jamie Foxx and Tommy Lee Jones in the Maggie Betts-directed project. Based on a true story, the film follows a bankrupt funeral home owner who decides to sue a rival businessman over a handshake deal gone wrong. The owner hires a flamboyant attorney (Foxx) to handle the case. Smollett will play Foxx’s opposing counsel, sources said. Betts is directing from a script written by Doug Wright. Producers on the film include Bobby Shriver via his Bobby Shriver Inc....
MOVIES・15 DAYS AGO

Netflix is always adding new movies to its catalog, and one of the latest dramas to hit the streaming service is American Gangster, starring Denzel Washington and Russell Crowe. The crime drama was released in 2007 and was directed by legendary director Ridley Scott. Scott Is having a huge year in 2021 with the releases of The Last Duel and House of Gucci, so that could explain the film's rise in popularity on the Netflix charts. American Gangster is currently at #8 In Netflix's top 10 for movies, reminding people why Washington and Crowe are two of the greatest actors of their generation.
MOVIES・23 DAYS AGO
Insider

Hart explained to Insider how real-life racist encounters he's had in the past inspired a moment on the show.
TV & VIDEOS・9 DAYS AGO
Outsider.com

Following the wrap of his upcoming film John Wick: Chapter 4, Keanu Reeves revealed he actually had to hone in on his equestrian skills during the movie’s production. During his recent interview with Esquire, Keanu Reeves explained in the opening sequence of John Wick: Chapter 4, his titled character is back in the desert a horse. “I’m going to hopefully be able to fast-gallop and run.”
MOVIES・4 DAYS AGO
CinemaBlend

Keanu Reeves Had To Learn A Totally Brand New Skill For John Wick 4's Opening Scene, And I Can’t Wait

Who says you can’t teach old (or immortal) dogs new tricks? Keanu Reeves is known for his intense action franchises, and even does a pretty substantial amount of his own stunts. After over 25 years in the action game, you’d think he’d know pretty much all there is to know, but that’s not quite accurate. The Matrix franchise star had to learn a totally new skill for John Wick 4, and I honestly can’t wait to see the results on screen in the film.
MOVIES・5 DAYS AGO

Max’s got the power — but does he really know how to use it? Zoey’s Extraordinary Playlist returns with a Christmas-themed movie, debuting this Wednesday, Dec. 1 for free on The Roku Channel, and it picks up where the cancelled NBC musical dramedy left off — with Zoey’s beau suddenly able to hear heart songs, as well. But unlike Zoey when she first got her gift, Max is really taking to his newfound ability. “Everything’s kind of coming a little easy to him,” star Skylar Astin previews in the above video interview. “He’s just solving people’s problems with no issue, which actually...
MOVIES・3 DAYS AGO
TVLine

Don Johnson returned as Nash Bridges this Saturday night, with Cheech Marin’s Joe Dominguez again riding shotgun. Did the reunion movie for USA Network prove worthy of a full-on series revival? The two-hour movie — which producers, at least at one point, hoped would serve as a backdoor pilot for a full series relaunch — picked up with Nash and Joe chasing after Trevor Garrison, a baddie involved in trafficking teenage girls. After a gunshot from Joe accidentally explodes a nearby gas truck (but in doing so KO’s Trevor), both he and Nash nonetheless get a two-week suspension from the San...
MOVIES・6 DAYS AGO
TVLine

The TVLine-Up: What's New, Returning and Leaving the Week of Nov. 28

This weekly feature is in addition to TVLine’s daily What to Watch listings and monthly guide to What’s on Streaming. With nearly 500 scripted shows now airing across broadcast, cable and streaming, it’s easy to forget that a favorite comedy is returning, or that the new “prestige drama” you anticipated is about to debut. So consider this our reminder to set your DVR, order a Season Pass, pop a fresh Memorex into the VCR… however it is you roll. This week, 17 new and returning series (including the final runs of Lost in Space and Money Heist), six fall finales (including The Equalizer...
TV & VIDEOS・6 DAYS AGO
TVLine

“Yellowjackets” lead and Academy Award and Emmy-nominated actress Juliette Lewis will recur as a guest star opposite Ed Begley Jr., Armand Fields, Chris Renfro, Eric Graise, Sachin Bhatt and Benito Skinner on Peacock’s reimagined “Queer as Folk” series. Lewis also joins previously announced recurring guest star, the iconic “Sex and the City” actress Kim Cattrall. The “Queer as Folk” reboot is inspired by the British series of the same name created by Russell T. Davies. It follows a diverse group of friends in New Orleans whose lives are transformed in the aftermath of a tragedy. The show is helmed by creator...
TV & VIDEOS・2 DAYS AGO
TVLine

Warning: This post contains True Story spoilers. Proceed at your own risk. Netflix’s hit limited series True Story does a great job unpacking the rivalrous and damaged relationship between two very different brothers as they attempt to cover up a murder or two. But when it comes to women, let’s just say there is a dearth of variety. The most fully realized woman on the show is Billie, played by Space Force‘s Tawny Newsome. She writes jokes for Kid (Kevin Hart), but he takes her for granted until almost losing her to Will Ferrell. Billie also has a clandestine romantic relationship with...
TV SERIES・5 DAYS AGO
TVLine

NBC may be taking up residence with Aunties, handing a put pilot commitment to a comedy executive-produced by comedian/host Amber Ruffin and written by Shantira Jackson (The Amber Ruffin Show, Peacock’s Saved by the Bell), our sister site Deadline reports. The project is loosely based on Jackson’s life and tells the story of what happens when a young woman goes back home to help raise the women who raised her. Serving as EPs alongside Jackson and Ruffin are Seth Meyers and Mike Shoemaker, who produce The Amber Ruffin Show via their production company Sethmaker Shoemeyers. Ready for more of today’s newsy nuggets? Well… *...
TV & VIDEOS・3 DAYS AGO
Variety

Hulu’s upcoming comedy “Life & Beth” nabbed Laura Benanti for a recurring guest star role, Variety has learned exclusively. Benanti will play Jane, a struggling mother, in the series from Amy Schumer, who writes, directs, executive produces and stars as the titular character. While Beth’s life looks good on paper — from her job as a wine distributor to her long-term relationship and cosmopolitan life in Manhattan — a sudden incident forces her to engage with her past, which changes her life forever. The show will center flashbacks to teenage Beth, which allows her to realize how she became who she is,...
TV & VIDEOS・1 DAY AGO
Deadline

Cult and controversial actor-director Vincent Gallo is returning to acting after a near decade-long absence from features. Quietly, Gallo took on one of the lead roles in D.J. Caruso’s (xXx: Return Of Xander Cage, Disturbia) movie thriller Shut In, which is the first original movie from conservative media outlet-turned film producer The Daily Wire. The project marks Gallo’s first feature acting role since 2013 film The Human Trust. The actor-filmmaker, now 60, is best known for directing controversial indie movie The Brown Bunny (2003) with Chloe Sevigny and Christina Ricci starrer Buffalo 66 (1998), and for leading cast in Francis Ford Coppola’s 2009 film...
MOVIES・2 DAYS AGO
Newsweek

The 10 Most Watched Movies on Netflix in November 2021: From 'The Croods' to 'Red Notice'

November saw Netflix release some highly anticipated movies like "The Princess Switch 3" and "Army of Thieves." But which was the most viewed this month?
MOVIES・3 DAYS AGO