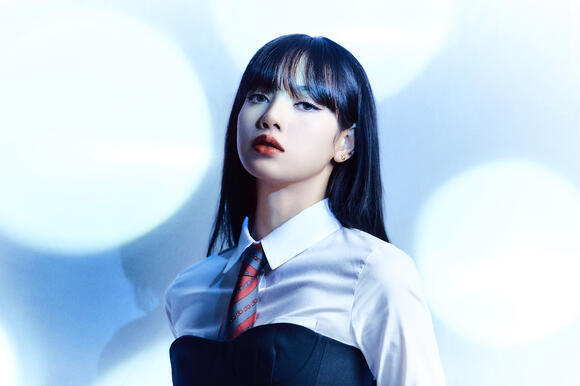 Blackpink ’s Lisa will be launching her first collection with MAC Cosmetics.

On Wednesday, the cosmetics company announced on its social media accounts that the Thai music sensation will soon release a makeup collection with them.

“Designed by Lisa. Created by MAC . Exclusively for you. Featuring all her favorite products — plus all-new shades inspired by what she loves most — Lisa’s first MAC collection is coming soon… #MACLovesLisa,” the brand’s post on Twitter read, accompanied by an up-close beauty shot of the singer.

MAC has not yet revealed what will be included in the collection or the exact date it will be released.

Lalisa Manobal, or known simply as Lisa professionally, has been a global ambassador for MAC Cosmetics since October 2020. She became the first female K-pop star to become the face of the company.

“I have always been a big fan of MAC! I like how the brand turns makeup into a form of self-expression, which always gives me great confidence on stage. Together with MAC, I am excited to invite and empower more audiences as we both have individuality and diversity at our core,” Lisa said in a statement regarding her new ambassadorship.

“Lisa’s unparalleled talent and bold, fashion -forward style make her the perfect match for MAC,” said Drew Elliott, senior vice president and global creative director for MAC, in a statement. “Always confident and never one to shy away from risks, she embodies our commitment to celebrating individuality and self-expression above all else. We can’t wait for her fans to see what she has in store for them through our collaboration.”

This year marks a big one for Lisa, who is best known for part of South Korean all-girl group Blackpink , which also consists of Ji-soo Kim, Chae-young “Roseanne” Park and Jennie Kim, known simply as Jisoo, Rosé and Jennie, respectively, to their legion of Blackpink fans called “Blinks.”

Last month, Lisa released her first solo album called “Lalisa.” The project became a commercial success, with her music video for the song “Lalisa” reaching 73.6 million views within 24 hours of release, making it the most-viewed video by a solo artist in 24 hours.

She will be the third member of Blackpink to have a solo album. Jennie debuted her album, “Solo,” in November 2018 while Rosé released her album, “R,” in March.

In more recent years, Lisa has been increasingly involved in the fashion industry. Known to have worked closely with Celine’s creative director Hedi Slimane since 2019, Lisa became the brand’s global ambassador in September 2020. In July 2020, she also became the newest brand ambassador for Bulgari.

Click here to read the full article. Ilene Joy is teaming with Elizabeth Sulcer for her next collection. The fine jeweler and celebrity stylist, respectively, are collaborating on a holiday fine jewelry collection, which is the second collection to come from Joy’s namesake brand since it launched in 2019. The collection includes 16 pieces across earrings and rings.More from WWDPhotos of the Brock Collection x H&M Fashion CollaborationPhotos of Target's 2021 Designer Dress CollectionMucinex Is Launching a Fashion Line for the Flu Season “I have a very specific kind of vibe that I like and Elizabeth is just so ridiculously spot on,”...
DESIGNERS & COLLECTIONS・12 HOURS AGO
WWD

Click here to read the full article. MILAN — Cristina Tardito is a woman with a very busy schedule. A design consultant for a prestigious French brand, she is also at the helm of Tardito Holding, which controls both the Tamigi manufacturing company and Kristina Ti, the women’s fashion brand she established two decades ago.More from WWDAbse-èl RTW Spring 2022The Attico Launches Beachwear Capsule CollectionDFS Unveils Exclusive "From Venice With Love" Collaboration Tardito inherited the manufacturing company from her father, who founded it in 1964 and became a leader in the production of underwear and beachwear. But when Tamigi was passed on to...
DESIGNERS & COLLECTIONS・1 HOUR AGO
WWD

Click here to read the full article. The fashion world was shocked on Sunday with the sudden news that designer Virgil Abloh died at the age of 41 after a private two-year battle with cancer. Designers including Pierpaolo Piccioli, Donna Karan, Marc Jacobs and Maria Grazia Chiuri among many others, have shared their tributes to Abloh on Instagram.More from WWDInside the Temple of Parisian Lifestyle: Pictures of La SamaritaineAll the Celebrities Performing at Louis Vuitton Men's Fall 2021 ShowLouis Vuitton Men's Spring 2021 in Tokyo Donatella Versace “Virgil, I am lost for words. The world has lost a fashion superstar. An innovator....
DESIGNERS & COLLECTIONS・1 DAY AGO
NME

Lisa of BLACKPINK has opened up about the worries she had when preparing to make her solo debut. In a recent interview with 102.7 KIIS FM’s iHeartRadio Countdown, the K-pop star discussed the her initial worries about promoting as a solo artist. Later, the singer also expressed her desire to go on tour and hold live performances for fans again.
CELEBRITIES・1 DAY AGO

The Nigerian-American designer that helmed the evolution of tank tops is expanding to provide the full K.NGSLEY aesthetic. Over the last two years, the fashion industry has witnessed the classic tank top take on many new forms. The standard two straps have evolved to variations using one to four straps with asymmetrical lines and back cutouts – making the once basic undergarment a refreshed statement piece. Behind the tank top evolution was New York based designer, Kingsley Gbadegesin, founder and designer of K.NGSLEY. Gbadegesin, who is also an activist for the Black and queer community, was inspired to create pieces that empowered the LGBTQ+ community, who the designer refers to as the girls and to create a new form of inclusive luxury.
DESIGNERS & COLLECTIONS・11 DAYS AGO
Soompi

Mystic Story’s new girl group Billie showed off their dancing skills in a fun cover video!. In a new “K-pop cover dance medley” released through 1theK’s YouTube channel, the rookie group proves their versatility by taking on the choreographies to a wide array of hit songs by both girl groups and boy groups.
MUSIC・11 DAYS AGO
GreenwichTime

Lalisa Manobal — better known as Lisa from the K-pop supergroup Blackpink — has tested positive for Covid-19, The New York Times reports. Blackpink’s label/production company, YG Entertainment, revealed the test result in a statement issued to Korean news outlets. YG said Lisa had had not been in close contact with her other three bandmates, but they were still awaiting the results of a PCR test.
PUBLIC HEALTH・5 DAYS AGO
kpopstarz.com

BLACKPINK Lisa just earned another accolade "Beauty Creative Director"! In an interview with Vogue Korea, the fashionista talked about her role in the newly released Mac x L makeup collection, and shared some of her skincare tips!. On November 23, Vogue Korea, a fashion and lifestyle magazine, sat down with...
MAKEUP・6 DAYS AGO

Blinks are sharing their well wishes of a speedy recover to Lisa of Blackpink after it was made public that the rapper, singer and dancer tested positive for COVID-19. On Wednesday (Nov. 24) it was reported that Lisa (real name Lalisa Manoban) tested positive for the coronavirus. While her fellow Blackpink members Rosé, Jennie and Jisoo have not been identified as "close contacts," they took PCR tests and are currently awaiting their respective results.
PUBLIC HEALTH・6 DAYS AGO
NME

Rosé, Jennie and Jisoo of the K-pop girl group BLACKPINK, have tested negative for COVID-19. In a statement to Sports Donga, YG Entertainment announced that the three K-pop idols received negative results from their PCR tests, which were done yesterday (November 24). The trio were tested after their fellow member Lisa had been diagnosed with the coronavirus yesterday afternoon.
WORLD・5 DAYS AGO
kpopstarz.com

BLACKPINK Stylist Under Fire for Jisoo’s Outfit in Recent Performance

Who are the 'Global It Girls' of K-pop? Top 20 Rankings Include BLACKPINK Lisa, Kep1er Xiaoting, Red Velvet Irene & More

BLACKPINK Lisa reigned as K-pop's "Global It Girl"! As a result of a survey conducted by a Korean media outlet, the most popular and trendy female idols, including Kep1er Shen Xiaoting, Red Velvet Irene, MAMAMOO Hwasa, and more were selected. On Nov. 25, the Korean media outlet TopStarNews conducted a...
WORLD・4 DAYS AGO
kpopstarz.com

Earlier today, it was reported that BLACKPINK's Lisa has tested positive for COVID-19. On November 24, her label YG Entertainment confirmed,. "BLACKPINK's Lisa was diagnosed with COVID-19 this afternoon. The other 3 BLACKPINK members haven't been classified as close contacts as of yet, but they immediately took PCR tests after hearing of Lisa's positive COVID-19 results. They're currently awaiting their results."
PUBLIC HEALTH・5 DAYS AGO
HOLAUSA

Disney’s latest movie Encanto brings the magic of family to the screens and the hard work and creativity to beauty lovers. The company has established a robust partnership with Latinx-owned businesses. It has teamed up with culturally relevant brands, Alamar Cosmetics, and Rizos Curls, intending to amplify the...
MOVIES・7 DAYS AGO
Footwear News

Pamela Anderson is a proud mom at The Webster in Los Angeles on Thursday. The 54-year old icon looked flawless in black maxi dress with matching pointed pumps, while she supported her eldest son Brandon Thomas Lee for the launch of his preppy clothing line called Swingers Club Capsule Collection. The brand’s pastel chinos, polo shirts, varsity jackets, and corduroy baseball caps were all on display at the party. He kept the ’90s style in the family while celebrating at the fashion boutique, with a white T-shirt, baggy light-wash jeans with a silver chain, a bright blue “Rock And Roll” trucker cap,...
LOS ANGELES, CA・25 DAYS AGO
101.1. The Wiz

Watch: BLACKPINK’s Jisoo Falls In Love With A Tormented Jung Hae In At First Sight In Ominous Teaser For “Snowdrop”

JTBC’s upcoming drama “Snowdrop” has unveiled an intriguing new teaser!. “Snowdrop,” which will be helmed by the director and writer of JTBC’s smash hit “SKY Castle,” is set in Seoul in 1987. The drama will tell the love story of Su Ho, a student at a prestigious university who suddenly rushes into a women’s university dorm covered in blood one day (played by Jung Hae In), and Young Ro, a student at the women’s university who hides him and takes care of his wounds even while facing danger under close surveillance (played by BLACKPINK’s Jisoo).
WORLD・11 DAYS AGO