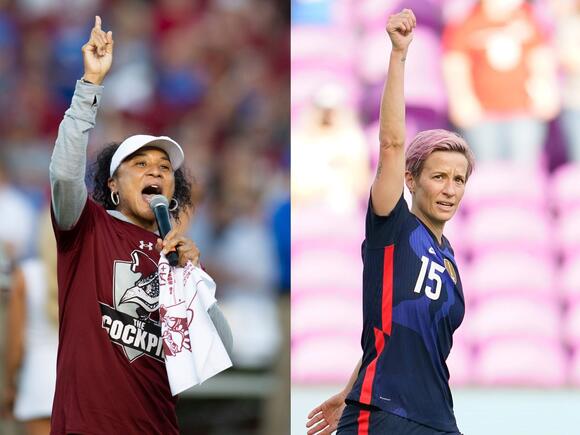 Dawn Staley is officially one of the highest-paid women in the world of college sports.

The legendary player-turned-coach of the University of South Carolina women's basketball team signed a $22.4 million contract to lead the top-ranked Gamecocks program for seven more years. The historic payday makes Staley the highest-paid Black coach in women's college basketball - but she knows it's about far more than just herself.

"It's a huge day, obviously for me, but I think it goes to women's basketball," Staley said during an interview with Good Morning America's Robin Roberts. "It's a great day for gender equity with our country, with our women's basketball."

"I hope that one day everybody sits where I'm sitting that has been discriminated against," she added. "It's our time in women's sports and women in general. It's our time. I think now this is going to become a popular right thing to do, and I hope it becomes the norm because it's the right thing to do."

Staley made sure to credit some of the hardest hitters in the equal pay fight - Megan Rapinoe and the US women's national soccer team - for all of their contributions to the pay equity conversation in recent years. She said she watched a recent HBO documentary about Rapinoe and her teammates' famous lawsuit against the US Soccer Federation in which they demanded commensurate compensation with the men's national team.

"There was a special on the women's soccer national team - 'LFG,'" Staley said. "I watched it, and they gave me the strength that I needed to keep pushing through with what they were going through."

"So Megan [Rapinoe] and crew, I appreciate you for your fight," she added.

Staley, the 2020 Coach of the Year, was on hand with her team as inequities between the women's and men's NCAA college basketball tournaments came to light last spring . She said that it's been encouraging to see the University of South Carolina lead the charge to level the playing field - at least at the coaching level.

"Being in the spotlight for the gender inequities during our Final Four, I think this is a step in the right direction," Staley said. "I think this is the university and the athletics department [working] to step up and be leaders in this area and hopefully it's a stepping stone to what the rest of the country can look like."

"You see a women's basketball coach make $22 million - people look at that," she added. "It's the number that pulls people in... I fought for it, no doubt about it, because I don't think we do anything different than any male coach around the country. And certainly our program has sustained success."

Check out Staley's full interview on GMA below:

In 1999, Carolyn Peck became the first Black women’s college basketball head coach to lead her team to a national championship, with her Purdue Boilermakers taking the title over the Duke Blue Devils. However, at the time, Peck’s history-making achievement was, at best, at footnote. Before the 1998-99 season, Peck...
BASKETBALL・14 DAYS AGO
CharlotteObserver.com

Another one of the top in-state girls basketball talents is staying home. Cardinal Newman center Ashlyn Watkins announced Wednesday she will play college basketball for Dawn Staley and the South Carolina women’s basketball team. Watkins made her announcement at her Columbia-area high school in front of friends and family. She picked the Gamecocks over North Carolina.
COLLEGE SPORTS・14 DAYS AGO
CharlotteObserver.com

This year’s NCAA women’s basketball tournament will feature four more teams, moving up from 64 teams to a 68-team field for the 2021-2022 season, the NCAA announced Wednesday. After the announcement, South Carolina head coach Dawn Staley said she wasn’t a fan of the move. “I wasn’t in favor of...
COLLEGE SPORTS・14 DAYS AGO
ESPN

PARADISE ISLAND, Bahamas -- South Carolina women's basketball coach Dawn Staley remembers when she was just beginning her coaching career and she'd look across the sideline and rarely see a Black woman leading the opposing team. It happens more often today but still not nearly enough, Staley says. "There is...
BASKETBALL・12 DAYS AGO

Staley's "Champ" by her side for No. 1 Gamecocks at Atlantis

PARADISE ISLAND, Bahamas (AP) — Dawn Staley brought more than her top-ranked South Carolina team to the inaugural women’s Battle 4 Atlantis. Her best pal — 4-year-old dog Champ — is alongside her as she walks the resort with fans recognizing him by name, in the locker room and even at news conferences. The only place Champ hasn’t joined Staley is on the sidelines during the tournament, where the Gamecocks play No. 2 Connecticut for Monday's championship.
NBA・10 DAYS AGO
The State

Dawn Staley’s plans after Raven Johnson injury, what to watch for in USC vs Clemson

Dawn Staley has an early puzzle to sort out this season. The South Carolina women’s basketball team lost Raven Johnson, the No. 1 point guard in the 2021 recruiting class, to a season-ending left knee injury in its second game of year against South Dakota. While starting point guard Destanni...
COLUMBIA, SC・15 DAYS AGO
GOBankingRates

How Much You Need To Earn To Be as Rich as Aaron Rodgers, Megan Rapinoe and Other Famous US Athletes

Wondering what it takes to achieve the high-roller swank that defines the daily lives of America's greatest athletes? GOBankingRates examined the net worths, salaries and high-profit side hustles that...
NFL・1 DAY AGO
cbs17

SYDNEY (AP) — After 21 years since last playing in Australia, the United States women’s soccer team needed only 24 seconds to score against the Matildas on Saturday. Turns out that was all the new-look American side needed in a 3-0 win at Sydney’s Olympic stadium before a Matildas-record crowd of 36,109.
SOCCER・5 DAYS AGO

Carli Lloyd Along with 36-year-old Megan Rapinoe, 39-year-old Carli Lloyd is part of the nucleus of the national team's old guard. And although she has now announced her retirement,...
MLS・3 DAYS AGO
KRDO News Channel 13

The UCCS women's soccer team is peaking at the right time. The Mountain Lions won the RMAC title in dominant fashion, and now they have their eyes on a national championship. "It’s very special," says defender Makenna Fowler. "It’s something that you can definitely overlook, I feel like. Taking that moment to kind of let The post UCCS women’s soccer team ready for NCAA Tournament appeared first on KRDO.
SOCCER・13 DAYS AGO
staradvertiser.com

The Hawaii Hilo women’s soccer team fell 5-1 to Sonoma State on Thursday in the first round of the NCAA Division II West Region Women’s Soccer tournament in Seattle. You're reading a premium story. Read the full story with our Print & Digital Subscription. Already a subscriber? Log in now...
HAWAII STATE・13 DAYS AGO
Forward

(JTA) — The men’s World Cup soccer qualifier games are underway, and the U.S. team has a shot at making the tournament that will take place next fall in Qatar. For those fans who have suppressed the memories — the U.S. men’s team failed to qualify last time around. One...
SOCCER・14 DAYS AGO

The Saint Anselm women’s soccer team received the program’s first ever bid to the NCAA Division II tournament on Monday night, November 15. The Hawks are the #4-seed in the East Regional, set to play #5-seeded Jefferson in Albany, New York on November 19 at 1pm. The Hawks had an...
ALBANY, NY・12 DAYS AGO
The Daily Memphian

Duke defeated the Tigers, who end the season 14-5-2.
MEMPHIS, TN・12 DAYS AGO
OCRegister

FAIRFAX, Va. — A week after its stunning upset of UCLA, the UC Irvine women’s soccer team could not extend its postseason run. The Anteaters (16-6) lost to Wisconsin, 3-0, on Friday in a second-round match of the NCAA tournament at George Mason Stadium. Senior midfielder Natalie Viggiano got the...
WISCONSIN STATE・12 DAYS AGO
kggfradio.com

The Saint Rose women's soccer team left campus Monday evening to head to West Virginia for their NCAA Tournament quarterfinal game. The Golden Knights will take on Mercy College Thursday morning at 10am in the Sweet 16.
SOCCER・2 DAYS AGO
Insider

DONCASTER, England (AP) — The England women's team swept to the biggest win in its history on Tuesday, beating Latvia 20-0 in a World Cup qualifier. There were 10 different scorers and four got hat tricks — including Ellen White, who became the team's record scorer of all time and is now on 48 goals for her country.
WORLD・1 DAY AGO