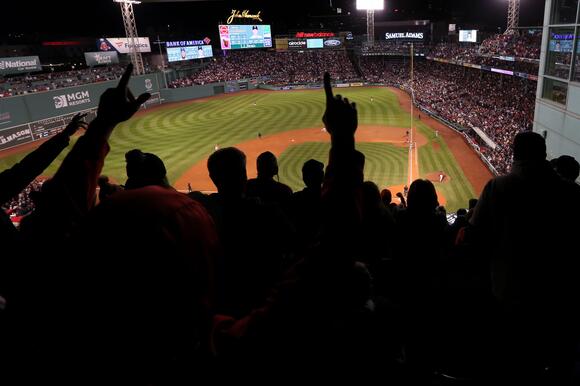 A 5-month-old dressed in a sweatsuit, stocking cap and headphones became an overnight sensation Tuesday night during Game 4 of the American League Championship Series between the Boston Red Sox and Houston Astros.

At the game with his parents Antonio and Kaitlyn Cali, little Giovanni made an immediate connection with the crowd when his picture was shown on the video board at Fenway Park.

“We’re dancing and we just held him up like, ‘Hey, here’s my cute baby, we’re dancing,’" Kaitlyn told CBSBoston.com . "They showed him on the jumbotron and the whole entire stadium was like, 'Yeah!'”

The moment touched a nerve with fans inside the park, and it later spread on social media.

With the encouragement of fans in their section, Antonio held up Giovanni to cheers of "M-V-P, M-V-P," "Let's go baby!" and – when he started drinking from his bottle – "Chug! Chug! Chug!"

The Fenway camera came back to them "four or five times," Kaitlyn said, "and the place was going wild for him.”

Even some of the players started looking up into the stands to see what the commotion was all about.

The Calis said it wasn't the first time they have taken their son to a Red Sox game, but this one was an unforgettable experience.

“People were talking to us, ' Oh the baby is on Twitter, is on Instagram .’ There was a radio station talking about him," Antonio said.

"So he’s now the Fenway Baby.”

Houston stole the show 2 out of three. Red Sox are dead. Bats have gone to sleep for the winter. They must have cleaned there clubs and ready for golf.

The Boston Red Sox made their decisions on which players they were going to add to the 40-man roster. The strategy left three spots open, while exposing some intriguing names to the Rule 5 Draft.
MLB・13 DAYS AGO
MassLive.com

There are 1,200 major-leaguers. If you were to rank them all based on the likelihood of the Red Sox acquiring them, Jackie Bradley Jr. might have been right at the bottom of the list. Yet less than 30 minutes before the start of baseball’s first work stoppage in 26 years,...
MLB・2 DAYS AGO
theScore

Free-agent left-hander Rich Hill is interested in a reunion with the Boston Red Sox next season. "There is an interest, without a doubt," the veteran hurler told The Boston Globe's Alex Speier. "There's a need on the other end. (But) the need for starting pitching is very apparent throughout the league - not just in Boston. It's also many other clubs that need it."
MLB・8 DAYS AGO
WEEI Sports Radio

The New York Yankees could be getting ready to suffer another loss at the hands of the Boston Red Sox. The Boston Globe reports Red Sox chief baseball officer Chaim Bloom is pursuing some of the same free agents as Yankees general manager Brian Cashman. They have had varying degrees...
MLB・11 DAYS AGO
survivinggrady.com

Why Do People Watch the Red Sox?

Red sox baseball fans have always had hit and miss seasons with their team never being consistent with results which have caused a lot of fans to stop watching the red sox due to poor performances. Baseball has been up and down over the past few seasons due to COVID putting a halt on most sports around the world. Now that baseball is back again, and fans can return to the grounds the sport is more popular than ever before. Some red sox fans are not that pleased to see their team back though due to them constantly underperforming in recent games over the course of the season. There are a lot of baseball fans that have started to watch the games from home due to them not wanting to travel far to see their teams potentially lose to then travel back home again. A lot of sports channels are now broadcasting live baseball games due to the popular demand of many fans. There are a lot of online platforms to watch the games from and some betting companies are even showing the games once you have placed a pre-match bet on your team, here are more options that are popular for baseball fans to use to place their bets or watch the games from.
MLB・14 DAYS AGO
Yardbarker

Jeurys Familia is five years removed from his lone All-Star appearance, but he is coming off of a solid season out of the New York Mets bullpen that has apparently caught the eye of the Boston Red Sox. Per WEEI.com's Rob Bradford, the Red Sox are "showing interest" in Familia,...
MLB・10 DAYS AGO
Click2Houston.com

According to both MLB Network and ESPN, Astros relief pitcher Kendall Graveman will be signing with the Chicago White Sox. The righthander had been acquired by the Astros near the trade deadline this past season as the team was looking to shore up its bullpen. For the regular season, combining both his stints with the Seattle Mariners and the Astros, Graveman finished 2021 with a 5-1 record and 10 saves with a 1.77 ERA in 53 games. In the postseason, he was 1-0 with a 1.64 ERA in nine games for the Astros.
MLB・10 DAYS AGO

A prioritized review of the Red Sox offseason needs. Just what are the needs of the Boston Red Sox? Which will Chaim Bloom prioritize before moving on to the next roster issue? If this were a medical triage, the team would be color-coded white, a designation of walking wounded. This is an organization that is trending upwards.
MLB・11 DAYS AGO
FanSided

Red Sox: David Ortiz deserves to be in the Hall of Fame

Legendary Red Sox slugger David Ortiz is one of the all-time greats. The 2022 Baseball Hall of Fame ballot announced Monday night features no lack of star power. Controversial holdovers Roger Clemens, Barry Bonds, and Curt Schilling make their 10th (and final) appearances on the ballot, while some of the biggest names of the 2000s – Ryan Howard, Prince Fielder, Mark Teixeira, Tim Lincecum, and more make their first appearances. Others, such as Alex Rodriguez, Manny Ramirez, and Andy Pettitte come with just as much baggage as Bonds and Clemens. No name on the ballot is bigger, or means more to Boston Red Sox fans, than that of David Ortiz.
MLB・9 DAYS AGO
Sportsnaut

As the 2021 season concludes, baseball fans and teams are excited for the exciting crop of MLB free agents who
NFL・2 DAYS AGO
Yardbarker

The Red Sox appear open to a reunion with free agent left-hander Rich Hill, according to The Boston Globe’s Alex Speier. In a recent conversation with Speier, Hill “suggested that he’s been in touch with members of the Red Sox this offseason, just as he was as a free agent last offseason.”
MLB・8 DAYS AGO

The Boston Red Sox have finally advanced out of the ‘interest’ stage, and are set to make their first move of the offseason, with the team reportedly finalizing a one-year deal with starter Michael Wacha, according to ESPN’s Jeff Passan. A 30-year-old righty, Wacha spent the 2021 season with the...
MLB・7 DAYS AGO
FanSided

Red Sox news includes a possible free agent and a lost free agent. Red Sox connections are in the news around the baseball world. One that has surfaced is the perpetual need for Boston, a right-hand slugger; this one is half a world away. His team, the Hiroshima Carp, is...
MLB・7 DAYS AGO
NECN

Michael Wacha on Joining Red Sox: ‘It Was Almost a No-Brainer'

Tomase: Can Wacha find success with Sox after 'no-brainer' signing? originally appeared on NBC Sports Boston. The Red Sox offseason Value Tour has made its first stop -- Michael Wacha. The free agent right-hander agreed to a one-year, $7 million contract on Saturday, bringing an experienced arm to the back...
MLB・6 DAYS AGO
Pittsburgh Post-Gazette

Fans fussed a few years ago when the Penguins changed their goal song from Andrew W.K.’s “Party Hard” to “Jump Around” by House of Pain, but another upbeat tune might better describe the franchise’s ongoing and seemingly imminent change in ownership. Meet the new boss, same as the old boss.
BOSTON, PA・8 DAYS AGO
FingerLakes1.com

Auburn’s Tim Locastro is a free agent. Locastro was non-tendered by the Boston Red Sox, meaning he was not offered a contract for the 2022 season. Boston acquired him from the New York Yankees, for whom he hit .190 in nine games this past season. Locastro has hit .231 in five seasons with three teams. He set a Major League record by stealing 29 consecutive bases to start his career before being caught.
NFL・18 HOURS AGO
Yardbarker

On this week’s installment of Podding the Red Sox: A BloggingtheRedSox.com Podcast, I am joined by Red Sox minor-league reliever Zack Kelly. Kelly, 26, spent the 2021 season between Double-A Portland and Triple-A Worcester. The right-hander posted a 2.18 ERA and strikeout-to-walk ratio of 69:18 over 36 relief appearances (45 1/3 innings pitched) across both levels. He re-signed with Boston on another minor-league contract for 2022 in October and has received an invite to major-league spring training.
MLB・4 DAYS AGO
Inside The Blue Jays

Does the Gausman Signing Give the Blue Jays the AL East’s Best Rotation?

The Blue Jays' rotation will look a bit different in 2021—let's see how it matches up against the division's best.
MLB・2 DAYS AGO