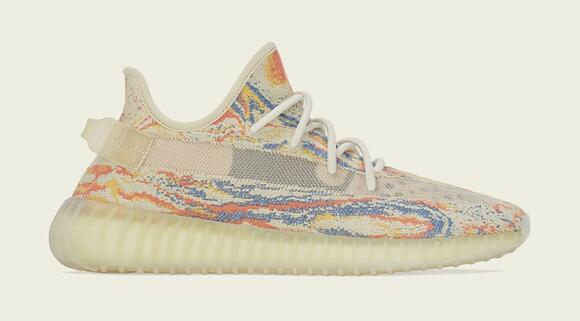 The German sportswear giant announced on its Twitter account today that the Kanye West-designed lifestyle shoe will release in a new “MX Oat” colorway before week’s end. In addition to confirming the latest’s style’s release info, the brand also offered a detailed look at the shoe.

The style features a new design on the breathable Primeknit upper donning a multi-colored wave pattern throughout the knit material. The upper wears a bright yellow hue as its base but is coupled with a combination of orange, blue and gray stripes running from the heel counter to the forefoot. Breaking up the look is a translucent stripe on the lateral side, yellow shoelaces, and a translucent pull tab on the heel. Completing the design is a yellow Boost-cushioned midsole and a matching rubber outsole.

The Adidas Yeezy Boost 350 V2 “Mx Oat” will be released this Saturday at Adidas.com/Yeezy and on the Confirmed app in North America and Europe. The style will also be available in select regions across the globe at launch day via the Adidas app. The shoe will be available in adults’ sizing for a retail price of $220.

In related Adidas Yeezy news, two more “Mx” colorways of the popular silhouette are reportedly releasing soon. According to Yeezy Mafia, a stealthy “Mx Rock” makeup will release in December while a blue-based “Mx” iteration will drop in 2022.

There’s another Adidas Yeezy Boost QNTM colorway coming soon and it will be available in sizes for the entire family. Product images of the Kanye West-designed Adidas Yeezy basketball shoe have surfaced this week in a new “Amber Tint” colorway. This latest iteration dons a predominantly brown-based color scheme on the breathable Primeknit upper including various shades covering the mid panel. The shoe also comes with a premium gray overlay panel at the toe box, a black neoprene ankle collar, and a 3M reflective silver heel counter. The silhouette signature design is the plush Boost cushioning featured in the midsole while...
APPAREL・9 DAYS AGO
Footwear News

Fans of both “South Park” and Adidas have plenty to be excited about as images of new sneaker collabs have emerged. After images have surfaced of the Stan Smith “Stan Marsh” last week, two more collaborative styles between the athletic giant and the popular TV show appear to be making their way to sneaker shelves soon in the form of the Superstar “Kyle Broflovski” and the NMD_R1 “Kenny McCormick” makeups. The first shoe draws inspiration from the character Kyle Broflovski and his signature ensemble as the upper dons a green leather upper that’s coupled with hairy overlay panels including on the Three...
APPAREL・11 DAYS AGO
Footwear News

Zegna Is the Latest Luxury Brand to Launch an Outdoor Collection

Zegna is hitting the trails. In what seems to be an ever-growing trend in the designer luxury market, the Italian menswear company has launched its first-ever outdoor capsule collection. The new range includes luxury activewear, footwear, and accessories designed with mountaineering and winter sports in mind. Conceived by Zegna’s artistic director Alessandro Sartori, the capsule aims to add a technical performance element to the brand’s range of more traditional menswear items. As the first installment of an ongoing inclusion of performance wear into the Zegna world, the capsule is a modular system that includes ski suits and puffers in Techmerino fabric,...
BEAUTY & FASHION・2 DAYS AGO
sneakernews.com

Thought Black Friday week was busy? Think again. Heading into December, the brands prove they’ve yet to begin pulling out all the stops, dropping everything from long-awaited collaborations to new colorways of beloved silhouettes. First, Jordan Brand wakes us up with a Reveille, dressing up the Air Jordan 3 in...
BEAUTY & FASHION・7 DAYS AGO

Since at least 2019, NIKE, Inc. has been committed to eliminating its carbon footprint through a number of ways detailed in its “Move to Zero” initiative. Over the last three years, the North American sportswear behemoth has made strides in sustainability work within its manufacturing, corporate and retail presences, but nothing has been celebrated quite like the resulting footwear.
ENVIRONMENT・12 DAYS AGO
SneakerFiles

Beyonce and her Ivy Park line will debut another collaboration with adidas Originals. Launching in December, we have the Ultra Boost OG highlighted in ‘Electric Green.’. This adidas Ultra Boost is sure to turn some heads as it comes dressed in a Bright shade of Green. Constructed with Primeknit, the same shade adorns the lace cage and heel counter. Next, a special leather patch lands on the tongue, co-branding hits the insoles, and they come with hiking-inspired laces. Lastly, we have a Boost midsole and a Continental rubber outsole.
APPAREL・11 DAYS AGO
sneakernews.com

Ye – the being formerly known as “Kanye West” – has had an eventful 22 days in November, with his latest string of headlines relating to a rekindling of his relationship Aubrey Drake Graham. On the footwear front, the adidas YEEZY-mastermind has been relatively quiet outside of adding two new styles to his YEEZY boots catalog, but he sent part of the internet into a frenzy at midnight on Monday, November 22nd, as he shock-dropped the YZY BSKTBL KNIT in “Slate Blue.”
DESIGNERS & COLLECTIONS・13 DAYS AGO
Hypebae

Kanye West is continuing to expand on his popular line of adidas YEEZY FOAM RNNRs with a new colorway dubbed “MX Sand.”. The clog-like shoe first made its debut in 2019, and has since received additional releases in colors like “Vermillion” and “Ochre.” Maintaining the original silhouette, the upcoming drop features a blend of sandy tan and muted blue tones, creating a marbled effect. A hint of pink is spotted near the toe, while the upper part of the shoe maintains a minimalist look in a light brown hue. The same colors are applied to the outsole to round out the design.
APPAREL・4 DAYS AGO

Continuing a steady stream of releases, we now have an official look at the. YEEZY BOOST 700 MNVN “Resin” to be dropped in the upcoming spring months. The shoe features a signature two-tone design with a pale green nylon upper base accented by darker hues at the edge of the overlays. Additional detailing comes in the form of smooth black suede with silver hits highlighting the toe box and heel, while the “700” markings are emblazoned in metallic reflective 3M. The black contrast design is continued on the tongue, laces and sock liner. Finishing up the design of the shoe is sculpted full-length black BOOST-assisted midsoles and matching rubber outsoles.
APPAREL・12 DAYS AGO
hypebeast.com

Expansion has been the key for Kanye West and his team at adidas in 2021 as this year has brought about several new YEEZY silhouettes to fruition. A handful of them are gearing up to make their debut during the holidays, one being the adidas YZY BOOST 350 V2 CMPCT in a “Slate Blue” colorway. The kicks first surfaced back October, but now we have a detailed and exclusive look at the kicks.
APPAREL・13 DAYS AGO
Hypebae

Adidas is expanding its GORE-TEX collection to include an adorable all-pink Forum Low designed to withstand cold and rain. The monochromatic sneaker’s upper features a leather and suede construction with a rubber shell toe and outsole. A prominent nylon strap and GORE-TEX label cover the forefoot while subtle adidas branding appears throughout.
APPAREL・13 DAYS AGO
hypebeast.com

The ‘ YEEZY BOOST 350 V2 “Blue Tint” is set for a restock in December. Originally debuted in December 2017, the “Blue Tint” colorway is known for its winter-ready layout highlighted with accents of turquoise on the collar and midsoles. Boasting a wavy grey and blue-grey pattern, this YEEZY iteration...
LIFESTYLE・11 DAYS AGO

Black Friday has changed a lot in recent years. And with COVID still looming over us, it’s hard to say whether or not we’ll see the rushes of people common years prior. But with vaccinations continuing to make progress and regulations further lightening up, we may see at least a couple lines — especially for many of this week’s upcoming releases.
SHOPPING・14 DAYS AGO
sneakernews.com

Much earlier in the month, RECOUTURE revealed an adidas Forum Low sample, which saw the silhouette entirely reconstructed out of scrap parts. Though the designer believed it to be impossible to make it to production, the idea was given the green light, with a release slated for later in November. And while this retail version may lack some of the original shoe’s charm, it carries over and refines the patchwork make-up.
APPAREL・10 DAYS AGO
SneakerFiles

Pharrell and adidas Originals will soon launch a new color option of his Humanrace Sichona. This pair is sure to turn some heads as it comes highlighted in ’Shock Yellow.’. Like the others, this adidas Humanrace Sichona comes with a one-piece Primeknit upper with Futurenatural that allows unrestricted movement. While Shock Yellow runs throughout, we have Bright Orange on the tongue labels and ‘Humanrace’ in Light Blue on the lateral side. Constructed with an anatomically-molded polyurethane midsole, the outsole, which is done in Yellow, has repeated Humanrace print.
DESIGNERS & COLLECTIONS・11 DAYS AGO
SneakerFiles

The Three Stripes Brand has a few new color ideas for the ZX 8000. One of the drops is known as ‘Fresh Mint Tea’ which is inspired by a Korean beverage. This adidas ZX 8000 features a Feather Grey, Alumina, and Green color combination. Utilizing a mixture of mesh, textile, and suede with Green and Grey covering most of the upper. Next, Yellow adorns the Trefoil logo on the tongue, lace jewel, insole, and Torsion underfoot. Finally, a semi-translucent outsole finishes the look.
RETAIL・10 DAYS AGO
realsport101.com

You'll need to act fast to pick up a pair of these new Yeezy's. adidas Yeezy is gearing up to end the year with a bang, with new colourways dropping for the 500s, 700s, and now the QNTM's. The GX1331 colourway is being dubbed "Amber Tint" as it utilises warmer...
RETAIL・10 DAYS AGO
SneakerFiles

San Diego Padres’ Fernando Tatís Jr. will connect with adidas to release a special Ultra Boost DNA. Looking closer, this adidas Ultra Boost comes with Navy on the Primeknit upper while the same shade appears on the lace cage and heel counter. Next, we have Lime Green Three Stripes branding, Pink on the liner, and his logo on the tongue and insoles. Lastly, his name is printed on the pull tab, we have a gradient Boost midsole and a White rubber outsole.
RETAIL・11 DAYS AGO
SneakerFiles

Adidas Originals will launch the ZX 9000 in a familiar colorway. This pair initially launched in 2008 and will make a return in Spring 2022. For those that remember, this adidas ZX 9000 comes exactly like the 2008 release, with the exception of the colors which are slightly lighter, which could be due to the lighting. Also, the pair comes with the standard leather, mesh, and suede build. Other details include a plastic lace jewel and a Torsion system on the sole.
RETAIL・8 DAYS AGO
hotnewhiphop.com

Trae Young is one of the best young stars in the NBA, so it should come as no surprise that he has his very own signature shoe. The Adidas Trae Young 1 was revealed earlier this year, and it has already become one of Adidas' most popular signature models yet. Adidas Basketball had been looking for an NBA star to truly take over with their shoes, and it seems like they have found that superstar in Young.
APPAREL・9 DAYS AGO