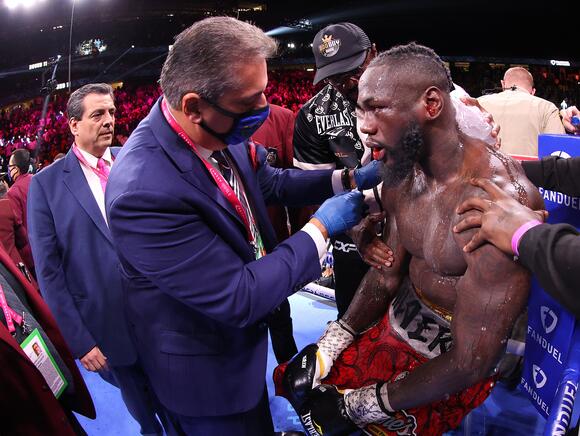 Deontay Wilder did not make excuses following his knockout defeat by Tyson Fury and was destabilised during the fight by a punch to his ear, according to the American’s trainer Malik Scott.

Wilder suffered his second knockout defeat by Fury in a row as the ‘Gypsy King’ retained his WBC belt in an instant classic in Las Vegas earlier this month.

The ‘Bronze Bomber’ showed considerable fight, however, as he recovered from an early knockdown to twice floor his British rival before Fury delivered the finishing blow in the 11th round.

Wilder had made several excuses following his first loss to Fury in February 2020, alleging that his opponent had cheated by loading his gloves as well.

But despite Wilder suggesting immediately after the fight that the weight difference between the fighters proved decisive, Scott insists the ‘Bronze Bomber’ has accepted the defeat and understands that he was thrown off by a punch to the ear in the third round.

“He didn’t say anyone cheated, and he didn’t say: ‘He caught me off guard.’ In boxing, people get hit in the ear. It’s not an excuse. He got hit in the ear, which is fair play to Fury,” Scott told Blue Blood Sports TV .

“Those narratives that come out about Deontay are so unfair. He didn’t say nobody did nothing wrong. He just said that, ‘After I got hit with a good shot, my equilibrium was off,’ which is factual.”

Wilder has been handed a six-month suspension from boxing following the fight and has undergone surgery on a broken hand.

But Scott says the American is motivated to return to the ring and remains a big draw in the sport despite losing his past two fights.

Fury is expected to take on Dillian Whyte or Otto Wallin next while Oleksandr Usyk faces Anthony Joshua in a rematch early next year.

Lack of skills by the fighter and trainer, and lack of avoiding getting punched. Thee end

Fury is a better boxer. Didn’t have to read the article. Too easy. And I like Wilder.

The latest list sees Deontay Wilder top of the pile despite losing to current ruler Tyson Fury a second time. WBC has decided to rank Deontay Wilder as the No. 1 heavyweight in the latest rankings confirmed at the 59th Convention held in Mexico. Despite losing twice to Fury, the Bronze Bomber seems to have impressed the WBC panelists.
COMBAT SPORTS・2 DAYS AGO
dexerto.com

Heavyweight boxing champion Tyson Fury has responded to YouTuber Logan Paul’s challenge to a fight, ahead of younger brother Tommy’s bout against Jake Paul on December 18. After months of going back and forth with challenges over social media, the date for a fight between Tommy Fury and Jake Paul was finally set for December 18, and tensions are already ramping up.
COMBAT SPORTS・10 DAYS AGO
BoxingNews24.com

Tyson Fury wants Oleksandr Usyk next for all the belts

By William Lloyd: Tyson Fury says he’s only interested in two fights against IBF/WBA/WBO heavyweight champion Oleksandr Usyk and Anthony Joshua. Apart from those two, Fury says he has NO interest in fighting Dillian Whyte or Joe Joyce. Usyk (19-0, 13 KOs) isn’t likely to face Fury next, unfortunately, because...
COMBAT SPORTS・11 DAYS AGO
worldboxingnews.net

Deontay Wilder was in good enough form against Tyson Fury last month to go straight into a high-profile Pay Per View with Andy Ruiz Jr. That’s the view in the aftermath of witnessing one of the best heavyweight battles of recent years at the T-Mobile Arena in Las Vegas. WBN...
LAS VEGAS, NV・6 DAYS AGO

Former lightweight world champion and WBN Fighter of the Year for 2020, Teofimo Lopez, was compared to Deontay Wilder this weekend. Fans jumped on a post by Lopez where ‘The Takeover’ stated he’d ‘almost’ died when fighting George Kambosos Jr. in New York. Detractors of the young star complained that...
COMBAT SPORTS・1 DAY AGO
punditarena.com

Tyson Fury has said that it is ironic that Anthony Joshua believes Deontay Wilder was unable to beat him as he lacks fighting intelligence. Wilder was unsuccessful in his attempt to beat Fury at the third time of asking last month, as the British heavyweight scored a knock out victory in the 11th round.
COMBAT SPORTS・10 DAYS AGO
SkySports

Tommy Fletcher 'has Deontay Wilder's power but with more in-ring IQ' and says: 'My power is natural. You can't teach power'

Tommy Fletcher has been touted as having the same punch power as Deontay Wilder and has insisted "I can’t argue with that". The 6'7'' teenage southpaw has developed a reputation for his hard-hitting style ahead of his professional debut. "He's got the power of Deontay Wilder, but he's got the...
COMBAT SPORTS・5 DAYS AGO
SPORTbible

Tyson Fury has claimed that he had a few pints just moments before stepping out to take on Deontay Wilder in their first bout. The 'Gyspy King' has been parachuted in to help train his younger brother Tommy ahead of his grudge match against YouTuber Jake Paul in December. As...
COMBAT SPORTS・10 DAYS AGO

Amidst talk of a super-fight between former heavyweight champions Andy Ruiz Jr. and Deontay Wilder, a new link has come in the shape of an ex-foe. Johann Duhaupas is a rugged Frenchman who damaged the face of Wilder considerably in a 2015 bruiser. He is now on the prowl for a match-up with Ruiz.
COMBAT SPORTS・6 DAYS AGO
houstonmirror.com

Check all options to listen or watch Tyson Fury vs Wilder 3 live streaming for free on Reddit, Crackstreams & ESPN/FOX PPV. One of the biggest huge heavyweight Boxing history takes place on Saturday, October 9, 2021.Lets see below between Boxing streams Tyson Fury vs Deontay Wilder 3 Live stream where and how to watch the fight free from any location.
COMBAT SPORTS・14 DAYS AGO
Boxing Scene

Tyson Fury on Usyk: I'd Give Him a Good Hiding, Run Him Over Like I Did Wilder

WBC heavyweight champion Tyson Fury believes that he would be too big and too strong for Olympic gold medal winner Oleksandr Usyk. Usyk created shockwaves in the heavyweight division back in September, when he outboxed Anthony Joshua over twelve rounds to capture the WBA, IBF, WBO, IBO world titles at Tottenham Hotspur Stadium.
COMBAT SPORTS・14 DAYS AGO
worldboxingnews.net

The best heavyweight star emerging from US shores since Deontay Wilder has promised to steal the show at Madison Square Garden on December 11. By his admission, Jared Anderson gets known as ‘The Real Big Baby.’ He has knocked out all ten of his opponents so far. He’s also earned significant praise from the current heavyweight king Tyson Fury.
COMBAT SPORTS・8 DAYS AGO

No complaints from Deontay Wilder this time, just steely determination

Deontay Wilder has vowed to get back in the ring once he’s fully recovered from a hand injury and says he’s got no complaints about his defeat to Tyson Fury. After their rematch, Wilder got accused of “not taking it like a man” as trainer Mark Breland stopped him following seven one-sided rounds.
COMBAT SPORTS・2 DAYS AGO
SPORTbible

Jake Paul has responded to Tyson Fury's comment that he should "keep his girlfriend on a leash" ahead of next month's clash with the British heavyweights' younger brother, Tommy. The American has been riling up just about every member of the Fury family in recent weeks, including 'Big' John Fury,...
COMBAT SPORTS・11 DAYS AGO
Sporting News

Former world champion Joseph Parker says there is no secret to the success of WBC heavyweight king Tyson Fury. Parker, 31, has been training alongside Fury as he prepares for his rematch with Derek Chisora in Manchester next month. Their first meeting at the same venue back in May finished...
COMBAT SPORTS・9 DAYS AGO
SPORTbible

Tyson Fury Has Been 'Terrorising' Jake Paul On Instagram Messenger

Tyson Fury has been "terrorising" Jake Paul on Instagram messenger. YouTuber-cum-boxer Paul has been gearing up to take on Tyson's younger brother Tommy in a grudge match where they finally get to settle their differences. Paul has never been one to shy away from trash-talking, but unfortunately for him, heavyweight...
COMBAT SPORTS・11 DAYS AGO
The Independent

Deontay Wilder insists he ‘got something out of’ Tyson Fury defeat

Deontay Wilder has insisted that he “got something out of” his most recent loss to Tyson Fury.Fury stopped Wilder in the 11th round in October to conclude their trilogy, having also finished the American in February 2020 after the rivals’ initial draw in December 2018.Following the pair’s second fight, Wilder listed a number of reasons as to why he lost – few relating to Fury’s performance – but he has seemingly learned lessons from the most recent bout.Speaking on his fiancee Telli Swift’s podcast, Wilder said: “I’m feeling great, I’m doing great.“We didn’t get what we wanted, but we...
COMBAT SPORTS・3 DAYS AGO
boxingnewsandviews.com

The Teofimo Lopez vs George Kambosos Jr. fight for much of 2021 went into utter oblivion. Rescheduled date after rescheduled date due to the world situation. That said — pragmatically looking at it all in all — now the dust has settled — with a sense of measure in what transpired in the end — it was worth the wait and patience.
COMBAT SPORTS・8 DAYS AGO
firstsportz.com

The Bloodline are one of the newest professional wrestling stables on WWE. They are a Heel stable that currently performs on Smackdown. It features Roman Reigns, Jey Uso and Jimmy Uso. Featuring three members and Paul Heyman as the manager, the faction gets its names from the fact that all the three Superstars belong to the iconic Anoa’i family.
WWE・21 HOURS AGO
ClutchPoints

Ronda Rousey is considered to be the trailblazer for women in mixed martial arts, specifically the UFC. She is also one of the greatest UFC fighters and is the first woman to be inducted into the UFC Hall of Fame. Let’s now take a look at Ronda Rousey’s net worth in 2021.
COMBAT SPORTS・13 DAYS AGO