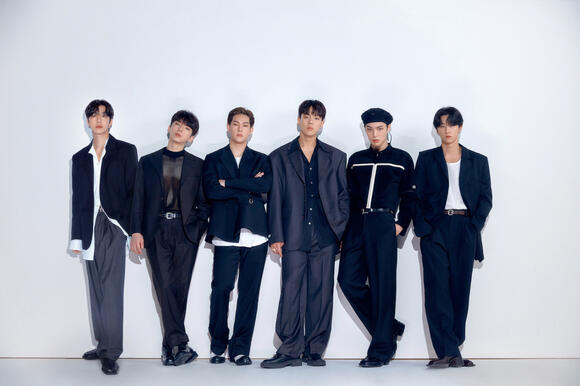 Monsta X have announced their upcoming English-language album: The Dreaming arrives on December 10th via Intertwine (BMG) in collaboration with Starship Entertainment. Preorders launch on Friday.

The 10-song set includes the previously released single “One Day,” which arrived last month alongside its video .

The Dreaming marks Monsta X’s second all-English language LP following All About Luv , which featured “ You Can’t Hold My Heart .” The album reached Number Five on the Billboard 200 chart in February 2020 making Monsta X one of only four K-pop artists to hit the Billboard top ten. All About Luv was the first all-English set released by a K-pop act in more than a decade.

In December, the band will perform a string of dates during the iHeartRadio Jingle Ball tour, including shows in Philadelphia, Washington, D.C., Atlanta, and Miami. Monsta X will kick off their own headlining tour next year, beginning on January 29th at Radio City Music Hall in New York and wrapping up at the Forum in Los Angeles on February 27th.

Grimes Falls for ‘Player of Games’ in New Song

Grimes has released new single “Player of Games.” The musician teased the track earlier in the week in a very Grimes fashion, sharing lines of binary code that translated to the song’s title. In the Anton Tammi-directed lyric video, a nude Grimes clings to a knight while she totes a sword behind her back. As she sings, the lyrics appear DOS-style, with green type and a cursor prompt. “If I loved him any less/I’d make him stay,” she sings on the chorus. “But he has to be the best/Player of games.” The Grimes and Illangelo-produced song appears in the new season of the video game Rocket League. “Player of Games” is Grimes’ first proper single since 2020’s Miss Anthropocene and also marks her first official release after she separated from her partner Elon Musk in September. At the end of that month, she posted a brief song called “Love” on social media. The track was in response to “the privacy invasion, bad press, online hate, and harassment” she had been experiencing in the wake of the news about the end of her relationship with Musk.
BEAUTY & FASHION・3 DAYS AGO
Rolling Stone

Hear Moses Sumney Reimagine Himself on ‘In Bloom (In the Woods)’

Moses Sumney has released a new version of his song “In Bloom.” The delicate, stripped-down track, titled “In Bloom (In the Woods),” is from the musician’s upcoming album and film Live From Blacklachia. The film, due out Dec. 10, captures a one-take performance Sumney did in the Blue Ridge Mountains of Western North Carolina. Sumney directed the film, which features performances of 14 songs, himself. The original version of “In Bloom” comes off Sumney’s 2020 album Græ. Græ marked Sumney’s second studio album and was released in two parts last year, the first in February and the second in May. It followed...
MUSIC・4 DAYS AGO
Rolling Stone

“Weird Al” Yankovic is returning to the road next year for an encore run of his Ridiculously Self-Indulgent, Ill-Advised Vanity Tour that he’s calling The Unfortunate Return of the Ridiculously Self-Indulgent, Ill-Advised Vanity Tour. It will once against focus on his lesser-known album tracks and skip over nearly all of his famous parody songs. It kicks off April 23rd, 2022 and wraps up October 29th with Yankovic’s first-ever show at New York’s Carnegie Hall. Along the way, he’s playing an incredible 133 shows. “I’ve loved doing every single incarnation of my live show, but honestly the Vanity tour is the most fun I’ve...
MUSIC・3 DAYS AGO
GlobalGrind

Worldwide phenomenon, Monsta X, has released their 10th mini album, No Limit, today. No Limit is an album that will become a turning point for Monsta X, where they will begin a new era amid the disordered, unprecedented world struck by Covid-19. This album contains a sense of calling to pioneer a new path, as they continue to infiltrate the North American market. With the band’s second English-language album The Dreaming dropping on 12/10, a global movie launching in more than 70 countries [dates/tickets here], a Top 30 smash hit “One Day” currently climbing the charts, and 4 iHeartRadio Jingle Ball performances in December; Monsta X are here to close out 2021 triumphantly.
MUSIC・14 DAYS AGO
NME

MONSTA X – ‘No Limit’ review: the boyband unleash the fire burning within

If there is only one thing MONSTA X need people to know about them, it’s that they have been leading the pack since their fateful debut in 2015. Over half a decade in the game has given rise to pioneers of foot-stomping, adrenaline-rushing music – from their debut mini-album ‘Trespass’ all the way to their latest offering, the ‘No Limit’ mini-album. It’s safe to say that their time on the playing field has allowed them to sculpt a sound and concept that are so uniquely theirs.
MUSIC・14 DAYS AGO
mxdwn.com

Darren Barnet (Never Have I Ever), Rich Ting (Warrior), and Keiko Agena (Better Call Saul) have been casted to lead the voice for the English-language dub of Netflix’s The Summit of the Gods. Directed by award-winning filmmaker Patrick Imbert, The Summit of the Gods is based on the acclaimed manga by Jirô Taniguchi and the novel by Baku Yumemakura.
TV & VIDEOS・12 DAYS AGO
Punknews.org

UK punks The Chisel are streaming their new album. It is called Retaliation and is out via La Vida Es Un Mus Discos. The Chisel will be touring the UK in January. Check out the album below.
MUSIC・9 DAYS AGO

Kihyun of K-pop boyband MONSTA X has opened up about how its like to record music in English. In a recent interview with Forbes, the singer discussed the process of recording a full-length album completely in English, in light of their upcoming sophomore English album ‘The Dreaming’, which arrives on December 10.
ENTERTAINMENT・4 DAYS AGO
Rolling Stone

It’s been a long between drinks for Aussie punk legends Bodyjar, but as the year comes to an end, they’ve announced their long-awaited new album, New Rituals. Set for release on February 4th, 2022 via the band’s own Pile of Sand Records, New Rituals serves as the group’s first full-length album since 2013’s Role Model. Of course, they’ve not been lazy in that time, with their Terra Firma EP arriving in 2017, and a handful of singles arriving across the last two years.
ROCK MUSIC・5 DAYS AGO
Rolling Stone

Opinions expressed are solely those of the author and do not reflect the views of Rolling Stone editors or publishers. Dance music (DM), or electronic music, has a considerable following, with over 1.5 billion people listening to it regularly, according to numbers from IMS Business Report 2019. The DM fan...
THEATER & DANCE・5 DAYS AGO

5 Seconds of Summer return with a new single, ‘2011’, in celebration of their tenth anniversary as a band. It’s been a spectacular decade for the Western Sydney band, who went from cutting their teeth at local joints like The Annandale Hotel to dominating arena stages globally. 5 Seconds of...
MUSIC・3 DAYS AGO
Rolling Stone

Late Chicago rapper Juice WRLD is the subject of new documentary Juice WRLD: Into the Abyss, which arrives via HBO and HBO Max as part of its Music Box Series on Dec. 16. In the new trailer, Juice WRLD asks an exuberant crowd to make some noise, crowd surfs at a festival, and mingles with fans as “Black & White” plays. While on the surface, the limelight looks appealing, behind the scenes he shares that things aren’t always as they appear. “When you a fan of this shit, you look at it from a certain perspective. But then when you’re in it, you see it for what it really is,” he says. “I’m still happy I can change the world, but it’s not what it look like.” Just like with his candid songs where he lays his emotions bare, he’s seen discussing his anxiety and depression and those who knew him also share their thoughts on his talent and his struggles. According to a press release, the Tommy Oliver-directed film will feature Juice WRLD in his element: performing, freestyling with friends, and collaborating with producers. It will feature never-before-seen footage, including previously unreleased tracks and interviews.
CELEBRITIES・3 DAYS AGO
Rolling Stone

BTS have dropped a holiday remix of their hit single “Butter.” The new version, “Butter (Holiday Remix),” is a carol pop genre track with a festive ambiance, just in time for the holiday season. BTS originally released “Butter” back in May. The track marked the South Korean group’s second-ever English-language single, following their global hit “Dynamite” from last August. The band has since shared several versions of the song, including “Butter (Hotter Remix)” and a remix featuring Megan Thee Stallion. Last month, BTS brought Megan Thee Stallion onstage during one of their four Los Angeles concerts to perform the remix live. The...
THEATER & DANCE・3 DAYS AGO
Soompi

MONSTA X On Achieving Their Most Music Show Wins Yet With “Rush Hour,” Their Upcoming Film And English Album, And More

MONSTA X recently spoke about successfully wrapping up their “No Limit” promotions, their upcoming English-language album, and more!. On November 19, MONSTA X released their 10th mini album “No Limit” along with their title track “Rush Hour,” which has gone on to win No. 1 on a total of five music shows. The album also topped Hanteo’s weekly album chart, as well as both Gaon’s weekly and retail album charts. as well as placing third on Billboard’s Hot Trending Songs realtime chart.
MUSIC・14 HOURS AGO
Rolling Stone

“It’s kind of hard to explain in English, but Gaho means extra. It’s not like ‘attention-seeking,’ but just like a little bit extra. My friends gave me that nickname, and it just stuck.” Gaho says during his chat with Rolling Stone Australia. Speaking from Seoul, South Korea, on a fine afternoon, the soloist is relaxed, composed, and more precocious than one would expect a 24-year-old gearing up for his first full-length album to be.
WORLD・12 HOURS AGO
985theriver.com

The Royal Affair and After, the forthcoming live album from longtime Moody Blues singer/bassist John Lodge, was scheduled for release on December 3, but according to a message on Lodge’s social media pages, it’s now been pushed back until January 14, 2022. The note explains that the “world-wide supply chain...
MUSIC・11 DAYS AGO
Rolling Stone

Arlo Enemark launched the Watermelon Boy project at the tail end of 2015. By this point, the Melbourne musician had been DJing and releasing music under the name Smile on Impact for close to 10 years. His experiments with electronic music date back more than two decades. “It’s something I’ve...
THEATER & DANCE・6 DAYS AGO