Walleye preview: 10 facts you might not know about Toledo hockey history 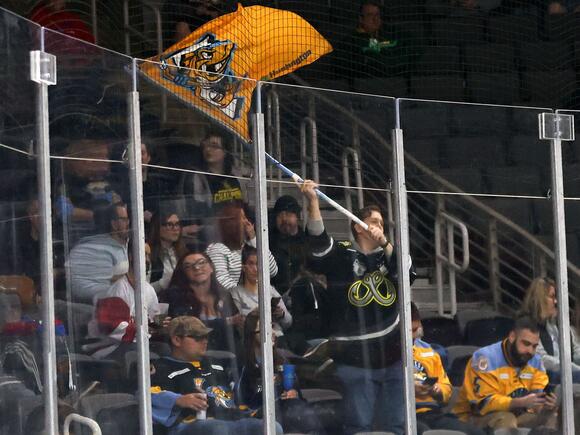 As the Toledo Walleye's 12th season gets underway, here are 10 tidbits on the history of professional hockey in Toledo.

■ Toledo is one of the most successful minor-league hockey cities. The 11 championship banners that hang from the rafters at the Huntington Center represent Toledo's rich pro hockey tradition dating back to the 1940s. Cups captured by the Mercurys, Blades, Goaldiggers, and Storm are recognized at the downtown arena. However, the last championship came in 1994 when the Storm won the Turner Cup.

■ There have been 157 sellouts at the Huntington Center with a record-setting 31 capacity crowds in 2018-19. More than 2.4 million people have attended games at the downtown arena.

■ The Walleye are the only ECHL team to ever host an outdoor game. Toledo will host a second Winterfest event from Dec. 16 to Jan. 2 with two games at Fifth Third Field.

■ The Walleye have qualified for the ECHL playoffs five straight seasons. However, the Walleye failed to qualify for the Kelly Cup postseason in three of its first five seasons.

■ Since the founding of pro hockey in Toledo in 1947, there have been only eight years that the sport was not played in the city. The Walleye's forced hiatus due to the coronavirus pandemic during the 2020-21 season put a halt to 11 straight seasons of ECHL hockey at the Huntington Center

The city went without hockey for a year after the Mercurys folded in 1962. Toledo endured its longest stretch without hockey from 1986 to 1991 after the Goaldiggers ceased operations. There was then a two-year hiatus bridging the cap between the end of the Storm franchise in 2006-07 and the Walleye's inaugural season in 2009.

■ The city did not have a hockey hall of fame until 2016. There will now be 27 members with the induction of the fifth class (Rick Corriveau, John Gravel, Ian MacPhee, Roger Maisonneuve, Lorne Molleken, Nick Vitucci, and Don Westbrooke) on Dec. 29.

■ U.S. Olympic legend Mike Eruzione started his pro career in Toledo. On Feb. 22, 1980, in Lake Placid, Eruzione scored the game-winning goal in what is regarded as the greatest games in the history of sports — a stunning 4-3 upset of the invincible Russians. Just a few months earlier, the young and charismatic forward was playing for the Toledo Goaldiggers at the old Sports Arena in East Toledo.

“We had so much fun playing out there,” Eruzione told The Blade in 2020. “It grew me as a player. I matured as a person.”

Eruzione earned the International Hockey League's rookie of the year honor in 1978 and was a key cog in the Turner Cup championship team. Eruzione played under legendary Toledo coach Ted Garvin and alongside some of the city's greatest hockey characters.

“I've never played in front of a greater base of fans,” Eruzione said.

Making his weekly appearance on The Greg Hill Show, Mike Milbury said he heard that some people in the Boston Bruins organization wanted to give a Jeremy Swayman-Dan Vladar goalie tandem a shot instead of spending big on a free agent.
NHL・2 DAYS AGO
The Blade

The Napoleon girls basketball team became the first Northern Lakes League program to ever win a state championship last season, and the Wildcats are expected to be the conference's top team once again.
NAPOLEON, OH・1 DAY AGO
The Detroit Free Press

Playing on the eve of Thanksgiving has been a tradition for the Detroit Red Wings since the franchise's first year in the NHL. Then known as the Detroit Cougars, they hosted the Chicago Black Hawks — the spelling was changed to Blackhawks in 1986 — on Nov. 24, 1926, and won, 1-0. Back then, the holiday...
NHL・2 DAYS AGO

Football: What to know about Toledo

Ohio is in the best position it's been all year. The Bobcats (3-7, 3-3 Mid-American Conference) are on a two-game winning streak after defeating Eastern Michigan 34-26 last week. They have a chance to extend that streak and earn a winning conference record when they host Toledo for their final home game of the season Tuesday.
TOLEDO, OH・11 DAYS AGO
ndinsider.com

Hockey preview: Everything you need to know about Notre Dame's weekend series at No. 1 Michigan

(CBS4) – The Colorado Avalanche are riding a 5-game win streak and coming off an exciting 7-5 win over the Ottawa Senators. That has placed positive notice back on the Avs, and at a time when the hockey team’s superstar is watching from the bleachers. Heading into the Thanksgiving week with a step ahead on the ice is always considered a notable measure of a team nearing the halfway mark of the NHL season. The CBS Sports pre-Thanksgiving NHL rankings boosted the Avs up three spots to put them at No. 10, as the league’s contenders come into focus. Alex Newhook of...
NHL・2 DAYS AGO
Sherdog

Perhaps Jarred Brooks has finally found a home with One Championship. The 28-year-old Warsaw, Indiana, native will make his latest organizational debut when he confronts Lito Adiwang in the One Championship “NextGen 3” main event on Nov. 26 at Singapore Indoor Stadium in Kallang, Singapore. Brooks enters the cage undefeated (3-0 with one no contest) across his previous four appearances. He last appeared under the Bellator MMA banner in December 2019, when he was awarded a three-round unanimous decision over Haruo Ochi at Bellator 237.
COMBAT SPORTS・9 DAYS AGO

Toledo Walleye forward Matt Berry, who produced six points in two games last weekend, was named the ECHL player of the week Tuesday. Berry tallied six points with three goals and three assists in Toledo's two wins at the Huntington Center on Friday and Saturday. It is the second time in his career that Berry has received the weekly honor.
NHL・3 DAYS AGO
The Blade

Why is Toledo playing a home game at the same time as Ohio State-Michigan?

When the Mid-American Conference football schedule was announced in February, the curious side glances occurred almost immediately. Toledo-Akron on Nov. 27…the same day as Ohio State-Michigan?
OHIO STATE・2 DAYS AGO
WTAJ

PITTSBURGH (AP) — The Pittsburgh Penguins have spent much of the first six weeks of the season grappling with injuries and a COVID-19 outbreak. One of their few constants has been the play of goaltender Tristan Jarry, whose playoff flameout last spring seems to be an increasingly small speck in his rearview mirror. Jarry made […]
NHL・1 DAY AGO

NASSAU, Bahamas — Defense wins championships, and defense is what has propelled the Toledo men’s basketball team into the Baha Mar Nassau Championship title game. Six times Tulane had the ball down one point in the second half on Tuesday, failing to score on all six possessions, including the final seconds of the game as UT’s Ryan Rollins locked up Tulane guard Jalen Cook, forcing an off-balance shot that was rebounded by Rollins, who cradled the ball like a baby as time expired.
TOLEDO, OH・2 DAYS AGO
The Blade

CINCINNATI — The Toledo Walleye found themselves on the short end of a lopsided affair Wednesday, with the Cincinnati Cyclones scoring multiple goals in all three periods of a 9-2 victory at the Heritage Bank Center.
CINCINNATI, OH・1 DAY AGO
The Blade

Ohio State is preparing for rivalry week ahead of the Buckeyes’ matchup with Michigan on Saturday at Michigan Stadium. The winner of Saturday’s game clinches the Big Ten East and advances to the Big Ten championship game in Indianapolis. Ohio State has won the previous seven matchups with Michigan.
MICHIGAN STATE・3 DAYS AGO
The Blade

FORT MYERS, Fla. — Everything was trending in the right direction for Bowling Green State University’s men’s basketball team on Tuesday. They made 3-pointers, they attacked the glass with energy, they flew around screens and switched with confidence, and they did much more positive than negative, which led to an 82-68 victory over Milwaukee on Tuesday in their first game in the Fort Myers Tip-Off.
FLORIDA STATE・3 DAYS AGO

FORT MYERS, Fla. — When Daeqwon Plowden is on, so is Bowling Green State University. The Falcons’ preseason All-Mid-American Conference selection tied a career high with 26 points in guiding the Falcons to an 82-68 victory over Horizon League foe Milwaukee in their opening game of the Fort Myers Tip-Off at the Suncoast Credit Union Arena on Tuesday.
FORT MYERS, FL・3 DAYS AGO
theleafsnation.com

‘The best thing about him is he doesn’t pretend to know you.’: How Greg Moore’s persona fits some of the changes needed in hockey

At 17-years-old, Greg Moore knew that coaching was in his future. He didn’t know where or when, but at the time, he knew that after his playing career was over, he wanted to get into coaching. And that’s what he did. “When I was 17-years-old, I was playing at the...
NHL・1 DAY AGO
The Blade

BOWLING GREEN — One final over-arching question remains for Bowling Green State University football in 2021. The Falcons have lost two in a row entering their season finale, but could earn a win in its final game of the season against an Ohio team that’s also 3-8 overall, but is 3-4 in Mid-American Conference play.
OHIO STATE・2 DAYS AGO
The Blade

FORT WAYNE, Ind. — Josh Dickinson scored the game-winning goal in overtime to help the Toledo Walleye edge the Fort Wayne Komets 3-2 on Thursday and move into a tie for first place in the ECHL’s Central Division.
NHL・21 HOURS AGO