‘Dune’ will make its HBO Max debut a little early: Will you be watching it in a theater or at home? 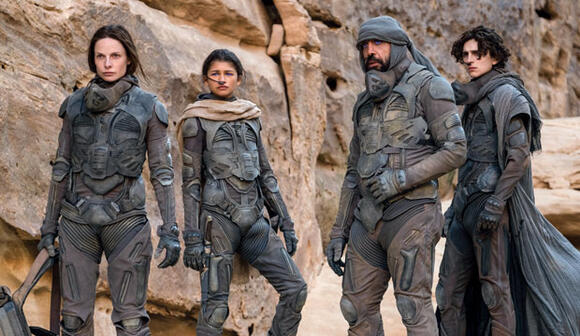 After a long, long, long wait, “ Dune ” is finally arriving on the big screen on October 22. But the COVID-19 pandemic persists, so Warner Bros . is continuing its year-long plan to stream its titles on HBO Max at the same time. And you’ll be able to check out “Dune” online a little early. HBO Max announced that the epic film will be available starting on Thursday, October 21, at 6:00pm Eastern, but only on the ad-free version of the streaming service. Which way are you planning to watch the film? Scroll down to vote in our poll at the bottom of this post.

“Dune” is Denis Villeneuve ‘s long-awaited adaptation of Frank Herbert ‘s epic novel of the same name about a young man ( Timothee Chalamet ) who travels to a dangerous planet to protect his people and the most valuable resource in the universe. This isn’t the first attempt to bring the story to the screen. David Lynch adapted the book in 1984, but his version was widely seen as a creative disappointment and a box office failure. Then there was the 2000 Syfy miniseries written and directed by John Harrison , which won a couple of Emmys for its visual effects and cinematography.

Villeneuve’s version was supposed to hit theaters in 2020, but the COVID-19 pandemic delayed that due to the closure of movie theaters around the world. In light of that, Warner made the controversial decision to debut their 2021 films in theaters and on HBO Max concurrently, which upset some filmmakers including Villeneuve himself . On the plus side, the film has already met with positive reviews , and it’s a likely Oscar nominee for Best Picture according to the combined predictions of Gold Derby users. Vote below to let us know which way you’ll be experiencing the film.

PREDICT the 2022 Oscar nominees through February 8

Dean Stockwell, an accomplished actor of stage and screen best known for his role in cult TV series Quantum Leap, has died. He was 85. Born Robert Dean Stockwell in North Hollywood in 1936, it almost feels like he was fated to perform – his father, Harry, voiced Prince Charming in Disney's Snow White, while his mother and younger sibling were also actors.
CELEBRITIES・22 DAYS AGO
Variety

“Don’t Look Up” is the last shoe to drop for Netflix this awards season, and there’s a 50/50 chance of it making a seismic impact (pun intended). Director Adam McKay assembles a sprawling ensemble that includes Oscar-winners Leonardo DiCaprio (“The Revenant”), Jennifer Lawrence (“Silver Linings Playbook”), Meryl Streep (“Kramer vs. Kramer,” “Sophie’s Choice” and “The Iron Lady”), Cate Blanchett (“The Aviator” and “Blue Jasmine”) and Mark Rylance (“Bridge of Spies”), along with Oscar-nominees Timothée Chalamet and Jonah Hill, to create a satirical look at our species’ (most likely) inevitable demise. DiCaprio has launched himself into the awards conversation, delivering another knockout performance...
MOVIES・13 DAYS AGO
bloody-disgusting.com

New horror releases tend to slow down a bit on the road to the holidays, and honestly that’s not a bad thing because it gives us a chance to catch up on all the stuff we missed earlier in the year. During this past Halloween Season alone, so many new movies were released that we can guarantee nobody reading this is entirely caught up, so make good use of the downtime!
MOVIES・16 DAYS AGO
Popculture

Netflix is always adding new movies to its catalog, and one of the latest dramas to hit the streaming service is American Gangster, starring Denzel Washington and Russell Crowe. The crime drama was released in 2007 and was directed by legendary director Ridley Scott. Scott Is having a huge year in 2021 with the releases of The Last Duel and House of Gucci, so that could explain the film's rise in popularity on the Netflix charts. American Gangster is currently at #8 In Netflix's top 10 for movies, reminding people why Washington and Crowe are two of the greatest actors of their generation.
MOVIES・21 DAYS AGO

Kurt Russell has a whole new generation of fans, all thanks to his turn as Santa Claus in Netflix's 2018 hit The Christmas Chronicles. The movie even earned a sequel, The Christmas Chronicles 2, which gave his longtime partner Goldie Hawn an even bigger part as Mrs. Claus. Although Thanksgiving is still a few days away, both movies are already starting to climb Netflix's U.S. charts before Christmas.
MOVIES・16 DAYS AGO
IndieWire

“King Richard” star and Oscar contender Will Smith opened up his wallet for his cast members amid a reported $40-million payday, The Hollywood Reporter says. Smith produces and stars in the film as the father of Venus and Serena Williams, and per reports, after WarnerMedia shifted its Warner Bros. slate to day-and-date for 2021, he opted to give money to his fellow co-stars. The idea was to compensate the actors for lost theatrical returns. “Smith enjoyed a hefty payday — according to reports, as much as $40 million — and then personally wrote checks to the cast which includes Saniyya Sidney...
CELEBRITIES・25 DAYS AGO
Popculture

A hilarious Ryan Reynolds comedy recently crashed the Netflix Top 10 ahead of the holidays, and fans of the actor will be excited that it's available to stream. Just Friends, a 2005 Christmas rom-com starring Reynolds and Anna Faris, is currently available on Netflix, and it's definitely one to queue up. While it seems to have been knocked down since, the movie was one of Netflix's Top 10 most-watched movies earlier this week.
MOVIES・20 DAYS AGO
Insider

Lawrence plays a weed-smoking astronomer in the upcoming Netflix movie "Don't Look Up." The actress admits to really getting high for a scene in the movie. "Everyone was fucking with me, I guess because I was high," Lawrence said at a screening of the movie. Jennifer Lawrence went method in...
MOVIES・9 DAYS AGO

It’s getting hot in here! Just in time for the holiday season, HBO Max is gifting fans with a teaser trailer for ‘Finding Magic Mike,’ a competition series based on Channing Tatum’s 2012 film ‘Magic Mike.’
MOVIES・11 DAYS AGO
Popculture

Nicolas Cage has taken on some dark and intense roles over the past several years, and now the actor is set to play an iconic horror character. According to The Hollywood Reporter, Cage has been cast as Dracula in Renfield, a film about Dracula's often-misunderstood right-hand man. Nicholas Holt (The Great, X-Men: First Class) has been cast as the titular character and will face off against Cage's father of the bloodthirsty undead.
MOVIES・1 DAY AGO
EW.com

Channing Tatum and Steven Soderbergh want to help men rediscover their "magic." The star and director of the original Magic Mike film are producers on a new HBO Max competition series, Finding Magic Mike, which assembles 10 men from across the country who feel like they've lost their, well, magic. The show puts these men through the wringer of a Magic Mike-style boot camp, where they learn sexy and daring dance routines in search of being crowned "the real Magic Mike." The winner receives a cash prize.
TV & VIDEOS・12 DAYS AGO
rolling out

The award-winning Mr. SOUL! initially debuted in 2018, sweeping the festival circuit in the documentary category starting with the Tribeca Film Festival. Written, directed and produced by Melissa Haizlip, the granddaughter of Ellis Haizlip, the legend at the center of the documentary, the film represents legacy in more ways than one. Haizlip gave us more details during a recent interview.
TV & VIDEOS・14 DAYS AGO

Dune isn't on HBO Max, but it's coming to Imax and Blu-ray soon

If you were too busy to watch a two-and-a-half-hour sci-fi epic described by some as "boring" and incomplete (it covered only one half of its two-part story), don't worry. Denis Villeneuve's Dune has dropped off HBO Max, but the sci-fi spectacle is coming to digital platforms in December and will be available on DVD, Blu-ray and 4K in January. Or you'll get another chance to see it on the biggest screen, as it returns to Imax theaters next week.
MOVIES・7 DAYS AGO
CNET

The holidays are the time to take that extra helping of pie, snuggle up with your loved ones, and soak up the magic of the season in your comfiest clothes. If you find yourself too stuffed to play football or hit up the Black Friday sales after your turkey dinner, there's a good chance you'll end up in the fetal position on the couch, rubbing your belly. Luckily, if you're looking for something to watch on Thanksgiving with the fam, these movies on HBO Max will leave everyone feeling thankful.
TV & VIDEOS・12 DAYS AGO
Hudson Valley Post

Another production is looking for more extras. Pretty Little Liars: Original Sin has been filming for weeks now in the Saugerties area of Ulster County. And, for the last few weeks they've been looking for extras. This week is no different. Hudson Valley Casting shared that the HBO Max project...
ULSTER COUNTY, NY・14 DAYS AGO
CNET

HBO Max: Streaming King Richard, Dune and everything else to know

HBO Max is the premium network's subscription streaming service that bundles together all the movies and shows on regular HBO with an extra streaming-only library of more shows, movies and originals. One of HBO Max's biggest draws during the pandemic has been new theatrically released movies streaming at no extra charge starting the same time they hit theaters. The latest one, King Richard, about the father to young Venus and Serena Williams, started streaming on Max on Friday, and this is the last weekend to stream Dune. (The Matrix 4 is set to arrive before year's end.)
TV & VIDEOS・12 DAYS AGO
PennLive.com

‘Tom and Jerry in New York’ returns to HBO Max for Season 2: How to watch this week

Another season of the animated adventures of “Tom and Jerry” will release this week on HBO Max. “Tom and Jerry in New York” Season 2 premieres on the streaming service Thursday, Nov. 18. The animated cat and mouse duo return to the 5-star Royal Gate Hotel in New York City to cause chaos — for each other and the hotel guests. The new season of the HBO Max Family series will contain more wild chases between Tom and Jerry along with over-the-top pranks and new characters.
NEW YORK CITY, NY・13 DAYS AGO
TechRadar

Rating: PG-13 Directed by Reinaldo Marcus Green (Top Boy, Monsters and Men), Will Smith portrays the resilience and devotion of Richard Williams, father and coach of Venus and Serena Williams, as he raised the two girls to go on and be named singles world No. 1 on a number of occasions and transform women's tennis forever.
TV & VIDEOS・13 DAYS AGO
Inverse

The best science fiction stories tend to take us to worlds and places unlike any we’ve seen before, whether they’re presenting us with visions of the future (Blade Runner, Snowpiercer) or planets the likes of which we have yet to discover (Ad Astra, Dune). The most effective sci-fi films, however, don’t just show us fantastical worlds and futuristic societies but use their settings to reflect and interrogate humanity’s deepest concerns, fears, and flaws.
TV & VIDEOS・20 HOURS AGO