Lakers News: Anthony Davis Says Lakers Loss Is "A Game We Could Have Won" 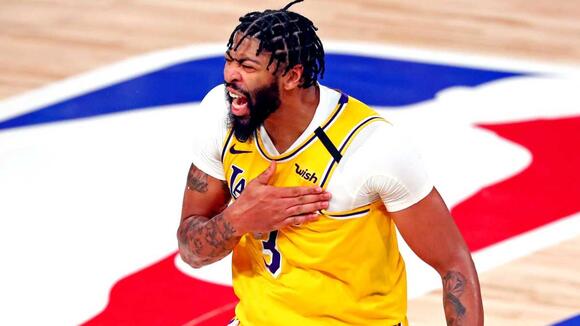 Despite losing to the Warriors 121-114 on opening night, Anthony Davis knows the Lakers were winning and could have won the game.

Anthony Davis took ownership of the Lakers' loss despite having good individual numbers on opening night. He had 33 points and 11 rebounds on 57% shooting. Davis looked dominant in the paint and in his post-game, and his jumper looked fresh. In the postgame interview, Davis spoke for the Lakers as a whole instead of shifting any blame.

"We've just got to do a better job at closing quarters. We let Poole get going. Our rotations. Not saying it's an excuse, but AB (Avery Bradley) hadn't had one practice with us. Obviously, he knows our system, kind of the same defensively, and he's a great defensive player. We had some miscues. I had a miscue on the Wiggins three in front of our bench. Offensive rebounds. They hurt us with the three towards the end of the game. We've just got to be able to get our schemes. We're not going to overreact. Obviously, we don't have all of our guys, but it's a game we definitely could have won."

He makes a good point about Avery Bradley. Bradley's defensive energy was immediate. You could feel it on the floor with the Lakers the moment Bradley check into the game. Bradley did miss a few rotations, but Davis was quick to give Bradley an understandable pass on the blame, as Bradley has been a Laker this season for a matter of hours.

Davis was quick to clarify that there were no excuses. The offensive rebounds Davis alluded to were mostly in the second half. The Lakers dominated the boards early, but as the game progressed the energy off the boards shifted to the Warriors. The Lakers will have to clean the glass up more consistently if they're going to hold leads.

Davis says the Lakers have no excuses, despite the fact he could have offered plenty. Davis is a superstar and his standards are high. The Lakers will bounce back.

westbrook look awful and sometimes he look like he was lost in outerspace..if he continues like that hes not going to last with la..period

The Los Angeles Lakers are in the midst of a roller-coaster campaign that, for the most part, has not lived up to the expectations. Los Angeles is 7-6 on the season and has been incredibly disappointing so far, especially for Lakers fans. Every loss in La La Land is magnified. But their ugly 107-83 defeat to the Minnesota Timberwolves at home on Friday night deservingly warranted the negative headlines and the boos from the Staples Center crowd.
NBA・19 DAYS AGO
ClutchPoints

Boston Celtics big man Enes Kanter recently made headlines after he went on an all-out attack on Los Angeles Lakers superstar LeBron James and his alleged ties to China. Unsurprisingly, Kanter has United States Senator Ted Cruz backing him in his corner as the outspoken Republican also went on an unfiltered tirade against LeBron.
NBA・11 DAYS AGO
fadeawayworld.net

Lonzo Ball On Being Traded From The Lakers: "It Was Anthony Davis, So There Was No Shame In That."

A 24-year-old Lonzo Ball is on his third team in five seasons. After being traded from the Lakers in 2019, he found himself in New Orleans where he helped Zion Williamson and Brandon Ingram compete for the Pelicans. Now, 'Zo is in Chicago and although he's only played 13 games,...
NBA・17 DAYS AGO
ClutchPoints

A lot of people from in and around the NBA have chimed in on the incident involving Los Angeles Lakers superstar LeBron James and Isaiah Stewart of the Detroit Pistons. LeBron got ejected for just the second time in his career for a supposed inadvertent blow to Stewart’s head that left the youngster’s face all covered in blood.
NBA・8 DAYS AGO

Would The Knicks Accept This Trade Offer From The Lakers? Russell Westbrook And DeAndre Jordan For Kemba Walker, Evan Fournier, Kevin Knox, And Nerlens Noel

Throughout an NBA season, we often see various media outlets propose hypothetical trades. Of course, not all of those hypothetical trades come to fruition, but there are times where real trades with a similar framework to a proposed trade do end up happening. There has been a recent trade proposed...
NBA・4 DAYS AGO
Bleacher Report

Former NBA star Kenyon Martin enjoyed seeing his son, Kenyon Martin Jr., go up against one of his former teammates recently. When asked about Martin Jr. and the Rockets facing Carmelo Anthony and the Los Angeles Lakers on Sunday and Tuesday, K-Mart told TMZ Sports: "It was dope. Strange feeling at first but testament to Melo for one. ... His longevity in his craft. Still playing at a high level."
NBA・26 DAYS AGO
Washington Post

Los Angeles Lakers forward LeBron James will be sidelined indefinitely after entering the NBA’s coronavirus health and safety protocols. The 36-year-old James, who has missed time this season with ankle and abdominal injuries, will be out for the Lakers’ game against the Sacramento Kings on Tuesday. Per the league’s protocols...
NBA・2 DAYS AGO
The Spun

The Los Angeles Lakers will be without LeBron James when they battle the New York Knicks at Madison Square Garden tonight. What about Anthony Davis?. Davis woke up with a fever on Tuesday morning, putting his availability for tonight’s game in doubt. Whatever bug he was fighting won’t keep him from playing the Knicks at MSG.
NBA・9 DAYS AGO

Talen Horton-Tucker’s form quickly dipped after the 20-year-old guard put on a show for the Los Angeles Lakers shortly after coming back from his thumb injury. Horton-Tucker is averaging just 3.3 points, going 0-for-5 from beyond the arc over the last three games. The Iowa State alum’s numbers differ drastically compared to the 23.3 points and 40% 3-point field goal efficiency he registered in his three games of the season.
NBA・8 DAYS AGO
Larry Brown Sports

DeAndre Jordan appears to be on his way to getting DeMoted by the Los Angeles Lakers. Lakers head coach Frank Vogel told reporters this week that Dwight Howard will start for the team Friday against the LA Clippers. Vogel also said that the team will only use one center moving forward, per Harrison Faigen of Silver Screen and Roll.
NBA・12 HOURS AGO
fadeawayworld.net

Dennis Rodman is arguably the biggest wildcard in NBA history. There was no telling what Rodman would do if he was given the opportunity to. While his talent as a defender and a rebounder knew no limits, sometimes he would try to do something reckless and had to be stopped.
NBA・3 HOURS AGO
AllLakers

During the beginning of the third quarter, LeBron James and Isaiah Thomas got tangled up during a boxout. James threw an in adverted elbow to get away from Stewart, but it landed squarely around Stewart's eye. As blood was streaming down Stewart's face he had to be separated multiple times to avoid starting a fight with the Lakers. James was ejected after a flagrant-2 foul, and Stewart obviously was sent to the locker room too.
NBA・11 DAYS AGO

Whenever the Los Angeles Lakers and Los Angeles Clippers match up, there is always some excitement from fans worldwide, but also in the city of Los Angeles. Those two are generally considered big-market teams who are city rivals, and with that comes a lot of attention. While the Lakers-Clippers game...
NBA・12 HOURS AGO
AllLakers

On Wednesday night there was another tough ending for L.A. after the Lakers vs. Bucks matchup. The Lakers fought throughout the entire game and were behind the Bucks by only a few points. However, the L.A. team could not find a way to get the upper hand over the Bucks. After a close game that ended 109-102 Bucks, the Lakers are now 8-8.
NBA・15 DAYS AGO
Yardbarker

Most NBA teams are approaching the quarter mark of the 2021-2022 campaign. If the season were to end on Wednesday, the star-studded Los Angeles Lakers would take part in the play-in tournament for the second straight time. As they approach the Thanksgiving holiday, the Lakers are a disappointing 9-10 and only percentage points ahead of the typical laughingstock of the league, the Minnesota Timberwolves, for ninth place in the Western Conference.
NBA・8 DAYS AGO
Sportsnaut

Bookmark. Save. Do your thing. We will be providing constant updates on this page as it relates to the biggest
NBA・1 DAY AGO
AllLakers

After LeBron James communicated to ESPN last night that he hopes to be ready for tomorrow's contest against the Celtics, it appears that the Los Angeles Lakers' injury report now reflects that their medical staff is also growing increasingly more optimistic, per Marc Stein of SubStack (formerly of ESPN and the New York Times):
NBA・14 DAYS AGO
AllLakers

The Lakers have had a problem with consistency from quarter to quarter, but the one thing they have been consistency atrocious in is their play in third quarters. The team was outscored 12 points in Boston on Friday. Just last week, the Lakers embarrassed themselves when they were outscored 40-12 at home against the lowly Timberwolves.
NBA・11 DAYS AGO
Riverside Press Enterprise

Lakers commit to Anthony Davis at center, but defense must work out kinks

BOSTON — A thorough accounting of Giannis Antetokounmpo’s 47-point barrage yields some obvious conclusions. The Greek Freak is strong, fast and very much still an MVP-caliber player who can push defenders around when he wants to, even Lakers All-Star Anthony Davis. But on the plays when Antetokounmpo wasn’t barrelling into...
NBA・14 DAYS AGO
AllLakers

Alex Caruso quickly became a fan favorite around Los Angeles when he was with the Lakers. Coming out of the NBA Development League in 2017 to debut, he immediately impressed fans and his teammates with hard work and constant hard play on the court. Caruso helped the Lakers to their...
NBA・17 DAYS AGO